Already armed with photos and a video showing lewd behavior, one participant vomiting and others staggering, falling and being taken away by ambulances at last month’s 2015 Federal Hill Irish Stroll, area residents objecting to these “pub crawls” are now combing through other material they find troubling – the sponsoring organization’s one-day event and liquor licenses with the city.

According to guidelines used by the Liquor Board, the one-day Class C liquor license “may only be issued to non-profit organizations.”

“But in December 2014,” said Federal Hill resident Michael Brassert, “their status was revoked.”

Brassert was addressing two dozen Federal Hill residents, clergy, business owners and others who came together in a church meeting room on Tuesday to discuss concern over the large-scale outdoor drinking events as well as regular weekend drinking and rowdy patrons in the increasingly bar-centric South Baltimore neighborhood. 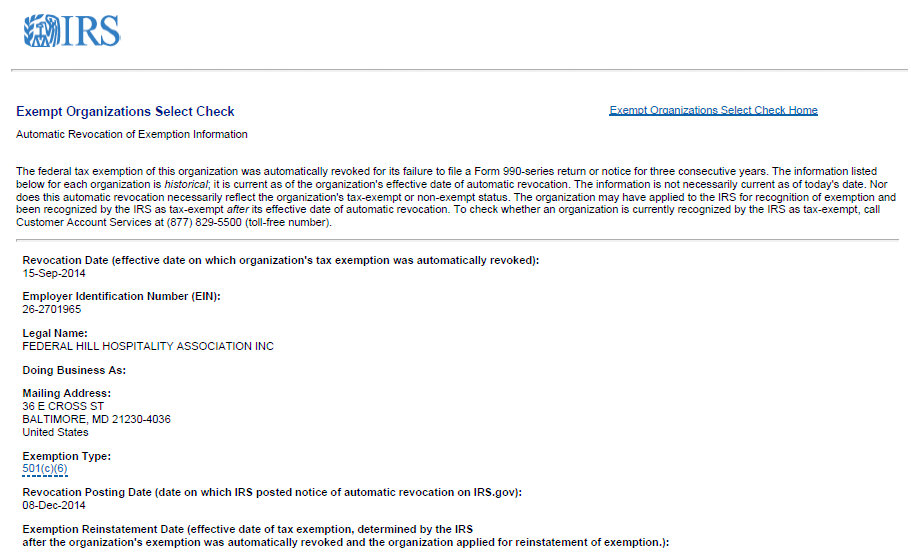 From a listing of tax exempt organizations, FHHA’s status with the IRS is listed as revoked.

Later Brassert provided The Brew with the basis for his assessment – a document that appears to show that the stroll’s sponsor, Federal Hill Hospitality Association Inc., had its tax-exempt status as a 501(c)6 revoked last year by the Internal Revenue Service “for its failure to file a form 990-series return or notice for three consecutive years.”

Despite the revocation, the liquor board gave the group a license for the St. Patrick’s Day-themed, multi-pub street festival, as did the Department of General Services (DGS).

DGS’s approval came despite some scathing language on the agency’s permit. The permit to temporarily closed off city streets said, “The Federal Hill Irish Stroll was sorely misrepresented by the promoters in 2014.”

It continues, “The event was permitted for 1,000 participants/workers, however the crowd was 5,000 – 6,000 participants. In 2015, their permit reads only 300 participants.” (The notation “on street,” is added, presumably to designate the number beyond the total maximum capacity of the 17 establishments.)

Meanwhile, this year, thousands came. The organizers capped attendance at 6,000 – or 20 times more than the DGS permit – based on information in an email sent by City Councilman Eric T. Costello to neighborhood leaders before the event.

The DGS permit goes on to note the 20 citations issued in 2014 for public urination, disorderly conduct and other offenses. It warns that paramedics would be needed for the 2015 stroll as well as 20-25 police officers at an overtime cost of $9,740.50.

The section of the DGS application asking for “Organization Tax ID No.” was left blank.

That the city granted approval after these lapses and inconsistencies struck several participants in the Tuesday meeting as outrageous.

“They blatantly lied to the city! What are the repercussions for lying to the city?” said Rufus Lusk, who concluded that “the city is incredibly bad at enforcement.”

Asked today to comment on the Federal Hill Hospitality Association’s non-profit status and provide any documentation that it is up-to-date, its president Brian McComas, owner of Ryleigh’s Oyster restaurant on Cross Street, referred a reporter to the group’s attorney, Joseph R. Woolman III.

Woolman declined comment, citing a pending case before the liquor board next week. He was referring to the hearing scheduled by the board on a petition by 20 residents who object to the Stroll and are formally protesting the renewal of the liquor licenses of the 17 establishments that participated in it last month.

But they may not get too far, judging by the statement issued by Chairman Thomas Ward on the rules for hearings conducted as part of this once-a-year opportunity for citizens’ to object to liquor license renewals.

“The sole issue before the board is whether the license should be terminated,” Ward wrote, adding that the commissioners “have no power to suspend, fine, impose conditions or otherwise regulate the license.”

“Due to the severity of a penalty to terminate a license,” he continued, “the evidence must be clear, weighty and persuasive that a license is in very serious violation of the liquor laws.”

Asked why the board approved a one-day license for an entity that is not a valid non-profit, Executive Secretary Michelle Bailey-Hedgepeth forwarded the application for the Stroll and said, “We are reviewing our policies and procedures for approving these licenses for these kinds of event.”

On the document she sent, under “Purpose of treasury and profits,” the applicants had written “General Fund (FHHA) and Green Fund.” Online ads for the event have described it as a fundraiser solely for the Hospitality Association.

Rich Polan, who leads the Federal Hill Thinking Green project, said the group is “basically a committee of the Federal Hill Neighborhood Association” dedicated to improving the area’s tree canopy. He said it had received contributions from FHHA in the past.

But Polan said he never understood the 2015 Stroll to be a fundraiser for the Green Fund and had told McComas months ago that he was not ready to make use of new donations. Asked if he was surprised to find “the Green Fund” listed on the application as a recipient, Polan said, “I can’t offer a comment about that.”

Federal Hill resident Susan Ettinger had arranged the Tuesday meeting with a new coalition of people concerned about the Stroll – residents, business owners, clergy, public health advocates, representatives of seniors and families. She had also gotten confirmation from several city officials who said they would attend; her plan was that the group could discuss the Stroll with them and ask about the city’s role in granting permits for it.

A representative from the Baltimore Police Department and Michelle Abbott-Cole, of DGS, were expected to attend and bring documentation, along with Alexandra Smith and Anna Mudd of the Mayor’s Office of Neighborhood Services, Ettinger said.

But Ettinger learned late Monday, via an email from Mudd, that the city officials weren’t coming to meet with them. Mudd emailed some information from each agency and said, “I hope the discussion is fruitful.”

Abbott-Cole spoke briefly with The Brew and promised to call back, but never did. Phone calls and emails to Mudd and the Office of Neighborhood Services and an email to Howard Libit of the Mayor’s Office of Strategic Planning and Policy have not been returned.

Ettinger said she was disappointed that the city officials abruptly canceled, saying she had hoped to better understand the process and come up with solutions. Instead the group shared their frustration over what they said is an escalation of bar-related incidents.

One of them, June Risley, who lives “one long block from Cross Street Market,” said noisy, rowdy bar patrons are a problem every Saturday night, not just during special events.

“They have sex, sometimes behind the Dumpsters, sometimes not,” she said. “We have some that think it’s fun to torment a couple of crippled seniors we have there. . . It starts at midnight.”

The residents talked about binge drinking, the risk of sexual assaults, traffic and parking problems, litter, noise and pedestrian safety, and strategized about how to make their points to the wider public.

Property values came up as well.

Increasing bar activity around Federal Hill, according to Lusk, “has done huge reputational damage to our neighborhood. . . It really hurts our brand to be known as the college binge drinking center.”