On Mount Street near the spot where Freddie Gray was dragged screaming into a police van – as a crowd of more than a thousand gathered yesterday for the third day of protests following his death – Pricilla Jackson was there.

“It’s women, too. It’s older women like me – they’re hurting us when they throw us to the ground and kick us and punch us,” Jackson said, going on to recount what happened to her in January.

Jackson said she was at the corner of Fulton Street and North Avenue where she sells newspapers when a police officer confronted her saying “somebody told me you were selling drugs.”

She denied it. When the officer told her he was writing her a ticket anyway and she complained, “They took me in a store and strip-searched me.”

“While I was angry and I was peeling off layers of clothes, I was crying,” she said. And when they asked her why, she told them.

“I said, ‘because you’re a disgrace,’” she recalled, speaking with a reporter. “I said, ‘you’re supposed to be there to protect us. I’m a black woman. I’m 53 years old. And look what you’ve done.’” 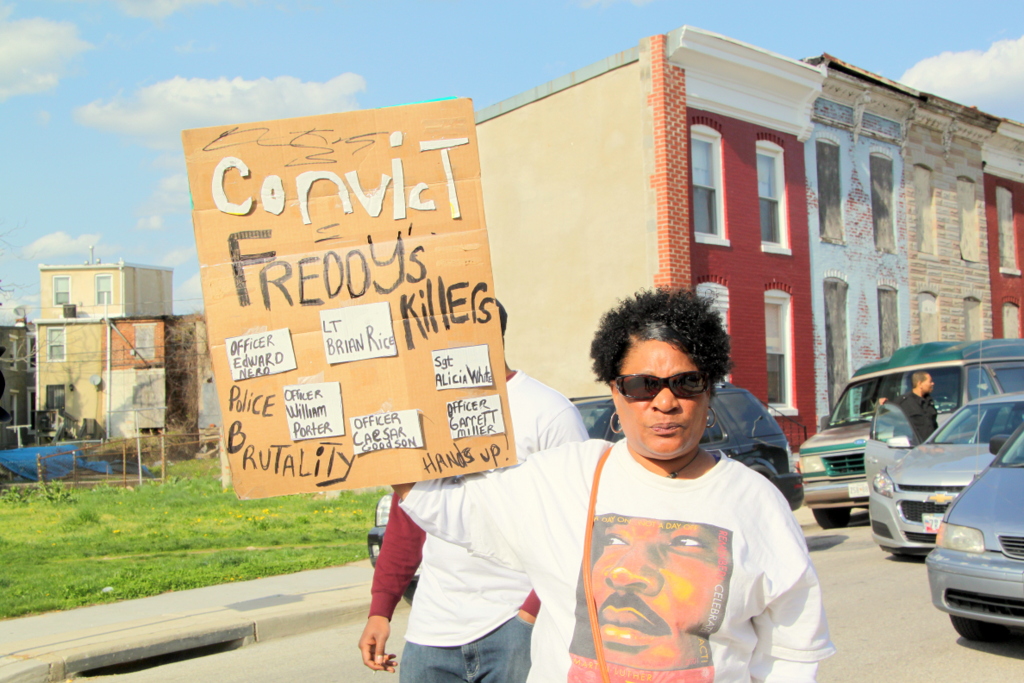 Police pushed her, punched her and strip-searched her in January, Pricilla Jackson (above) says. (Photo by Fern Shen) 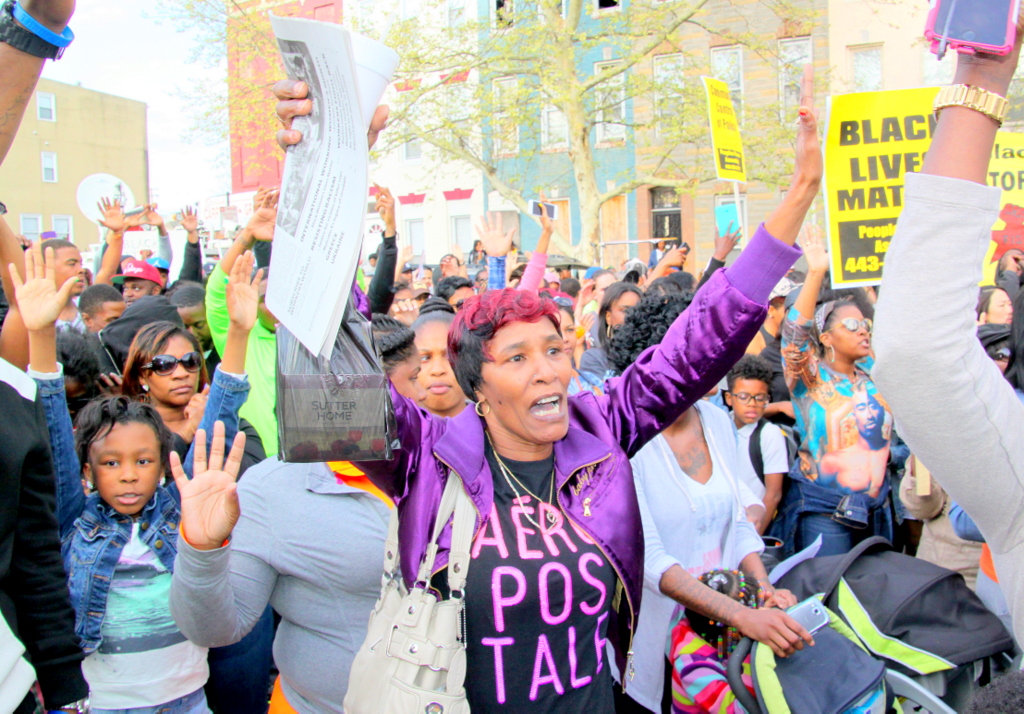 “Hands up, don’t shoot,” protesters chant outside the Western District Police Station on the third day of protests over the death of Freddie Gray. (Photo by Fern Shen)

Mayor: “He was Able-bodied Getting into the Van”

It was the kind of personal story and deep anger crackling through the chanting, praying, sign-brandishing crowd, assembled to demand justice in the Gray case, which now is the subject of a U.S. Justice Department civil rights investigation.

Conducting their own investigations and releasing few details so far about why Gray was stopped and how he was injured on April 12, city officials have nevertheless made statements that have inflamed crowd anger and prompted a media challenge. 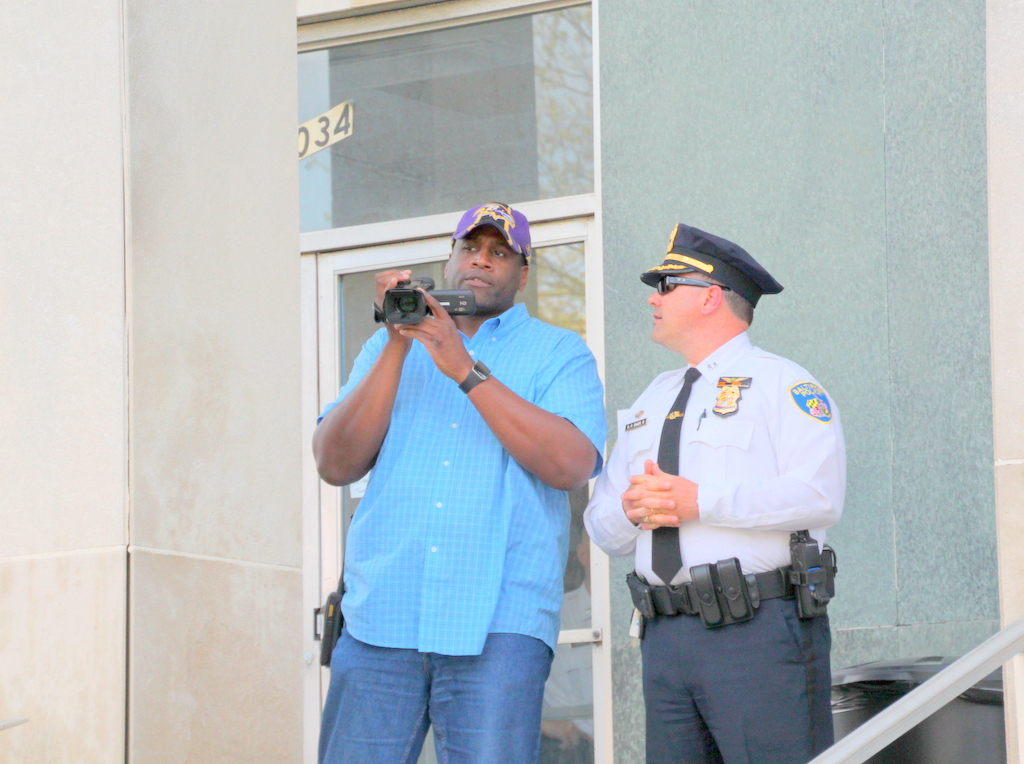 Police film the crowd on Day 3 of the Freddie Gray protests. (Photo by Fern Shen)

Noting that Gray’s legs appeared to be limp and dragging in video of a portion of his arrest, CNN’s Anderson Cooper questioned Mayor Stephanie Rawlings-Blake’s statement to him last night that Gray was “able-bodied when he got into the van.”

Appearing to back off, Rawlings-Blake replied that she was only able to judge from the limited information she has seen and that the medical examiner would make the final determination.

But the mayor, perhaps focusing on the brief moment in the video when Gray appears to support himself, also reiterated to Cooper, “We know he was fine getting into the van.”

At yesterday’s protest, asked what message she might have for the mayor, a 43-year-old West Baltimore woman said. “I would say ‘Tell her to get out of that seat and put herself in a mother’s seat.”

“Anyone can see they beat that boy. They hurt that boy,” she said. “I have a son, and it could have been him.”

“Everybody wants Sheila back ,” the woman said, referring to Rawlings-Blake’s predecessor as mayor, Sheila Dixon, who resigned in 2010 as part of a plea agreement after a jury found her guilty of taking gift cards intended for poor children. “She would have been out here at least talking to us.” 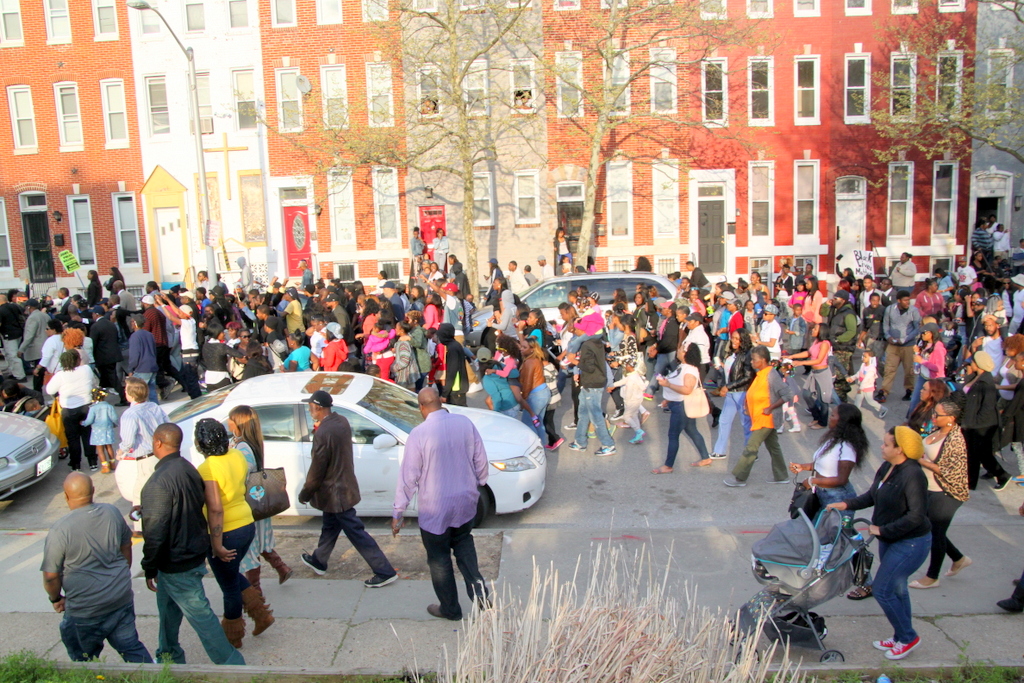 Protest over Freddie Gray’s fatal arrest stretches for about five blocks up and down Mount Street. (Photo by Fern Shen)

The protest began on Mount Street, at the Presbury Street intersection (the spot where a bystander’s video shows police holding Gray down), and proceeded along Mount to the Western District, which was ringed with police officers keeping the crowd away from the building.

The whop-whop sound of a police helicopter throbbed behind the crowd’s chants of “Tell the truth, stop the lies, Freddie Gary didn’t have to die”.

At one point, the screaming whine of dirt bikes drowned out everything as about a half-dozen of them cruised down Mount Street through the marching crowd.

It was not difficult to find people in the crowd who knew or were related to Gray. “He was outside my home every day,” said 16-year-old Briana Billy, watching the protest with her 8-year-old brother, Damian Billy. “He was nice, he spoke to everybody.”

Hershie Witherspoon, said she lived a block from Gray and grew up with him. “He was very likable, always smiling. . . loved by kids, loved by older, elderly persons,” she said, recalling getting the news of his death on Sunday following a week in a coma.

“It just crushed me,” said the 23-year-old Witherspoon. “I thought he would fight and pull through.” 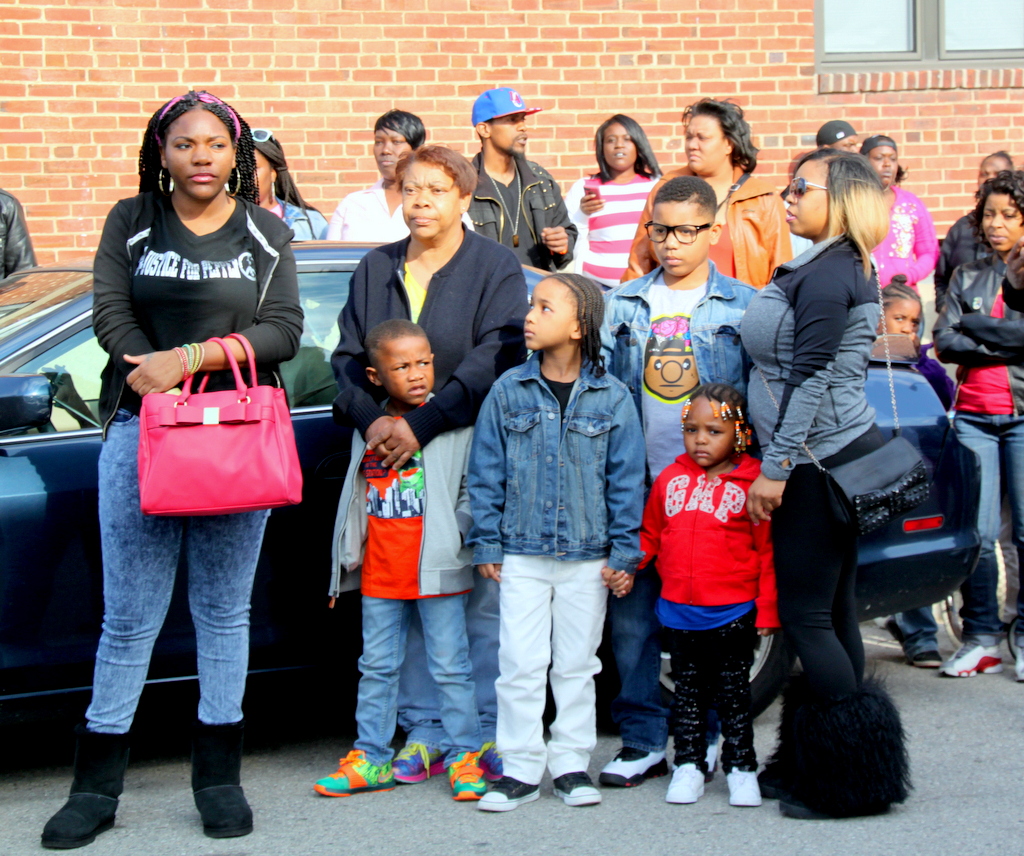 Hershie Witherspoon (left), a friend of Freddie Gray, joins in the protest with family members. (Photo by Fern Shen) 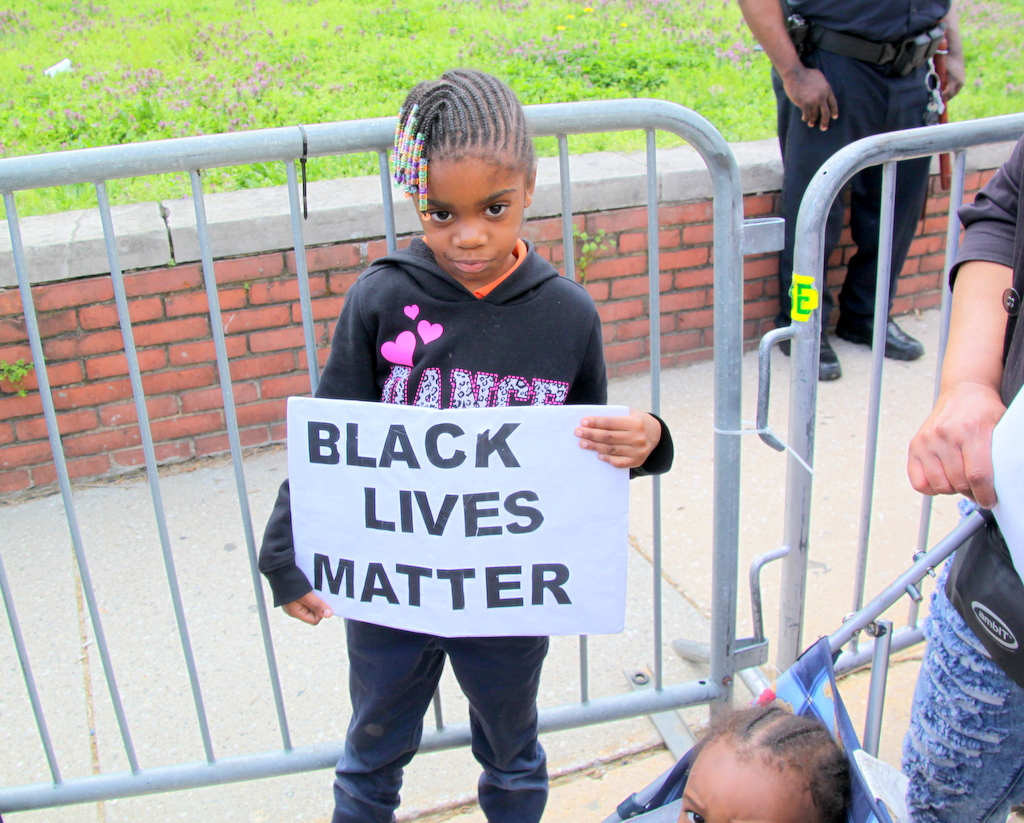 “The kids are taking this especially hard,” she said. “Hopefully this case will be treated fairly. That’s all we want.”

“We Are Citizens Who Demand Respect”

The speakers leading the crowd had more explicit demands.

Standing before the police building,Pastor Jamal H. Bryant of the Empowerment Temple gave the crowd a call to action.

Police Commissioner Anthony W. Batts has suspended six officers, with pay, in the wake of the incident, but Bryant said yesterday that’s not enough.

“We are not thugs, we are not criminals, we are citizens of Baltimore that demand respect,” Bryant said. “We are going to shut City Hall down until six officers are in jail.” 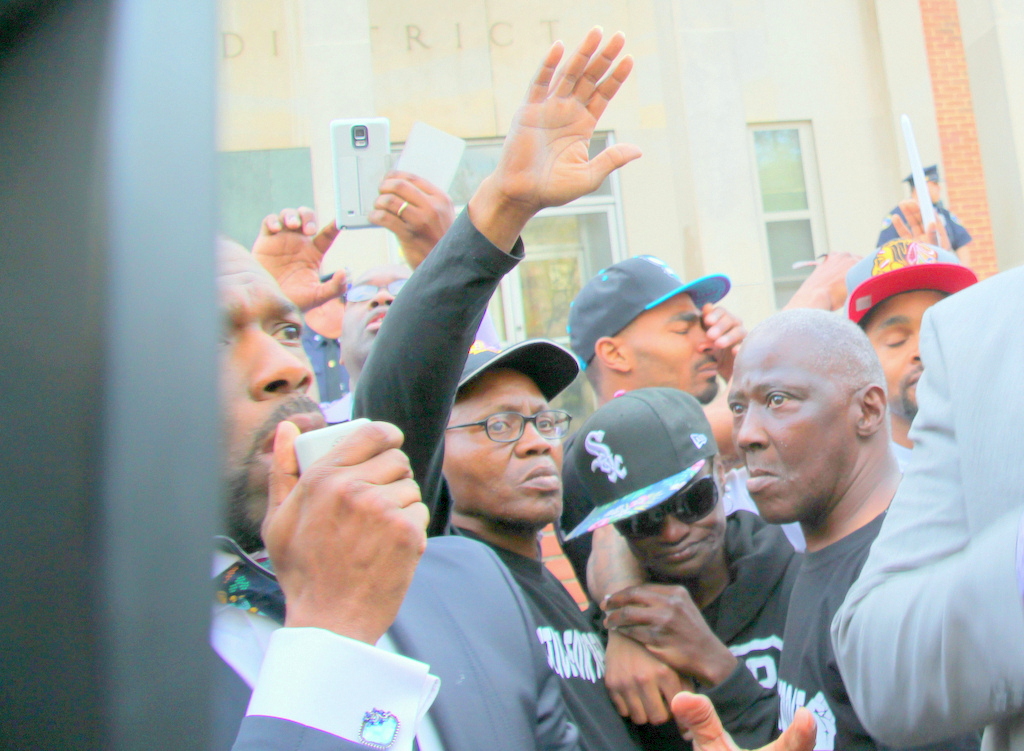 Freddie Gray’s mother (in hat) and other family members fight back tears outside the Western District police station, as Pastor Jamal Bryant addresses the crowd. (Photo by Fern Shen)

Family members, meanwhile, said little but spoke with their eyes, which were brimming with tears, and with their gestures.

They held each other in long embraces. Gray’s mother, Gloria Darden, covered her eyes with her hands, pulled a hoodie down over her head and at one point doubled over and sobbed.

Bryant and Tessa Hill-Aston, president of the local chapter of the NAACP, locked arms with the family members and walked with them from the police station back to the scene of their son’s arrest where a makeshift memorial had been set up.

There, one of them, as Bryant led a prayer and the police helicopter hovered overhead, unloosed an eerie, keening wail. 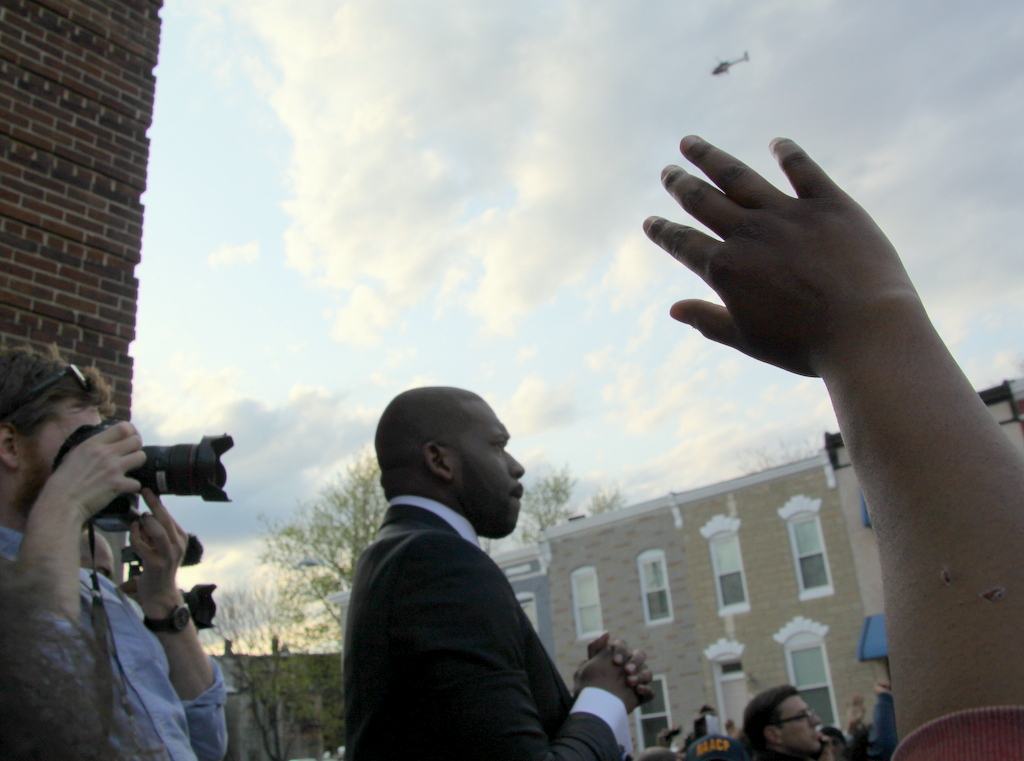