When CNN and other out-of-town press roll into your city, absurdity can roll in, too.

One CNN reporter said yesterday he would stick protectively close to U.S. Rep. Elijah Cummings because Cummings was out on North Avenue “alone.”

With church folk and dancers out calling for peace and fist-bumping the troopers, the daytime atmosphere was less Mad Max than mellow street fair. Plus there’s the pesky fact that Rep. Cummings is a West Baltimore native who may know this neighborhood a wee bit better than the parachuting correspondent.

Local residents and politicians have been playing a game of whack-a-mole, trying to swat down the simple-minded (and often nasty) national narrative, with its heavy focus on looting and hurled rocks and fuzzy forgetfulness of the severe breakdown of police-community trust that preceded the rock-throwing.

CNN’s Erin Burnett yesterday pressed City Councilman Carl Stokes about the use of the word “thugs” to describe the young people hurling objects at police around Mondawmin Mall.

“Isn’t it the right word?” she asked.

“No, of course it’s not the right word to call our children thugs,” Stokes replied. “These are children that have been set aside, marginalized, who have not been engaged by us. No! We don’t have to call them thugs.”

“Thugs” and the N-word

Burnett went on to challenge Stokes on his remarks.

“But how does that justify what they did?” she said. “That’s a sense of right and wrong! They know it’s wrong to steal and burn down a CVS and a[n] old person’s home. I mean c’mon!”

Stokes paused and then let it rip.

“No. We don’t have to call them by names such as that. We don’t have to do that. That is exactly what we sent them to,” Stokes said. “When you say c’mon, c’mon what? You wouldn’t call your child a thug if they would do something that would not be what you’d expect them to do.” 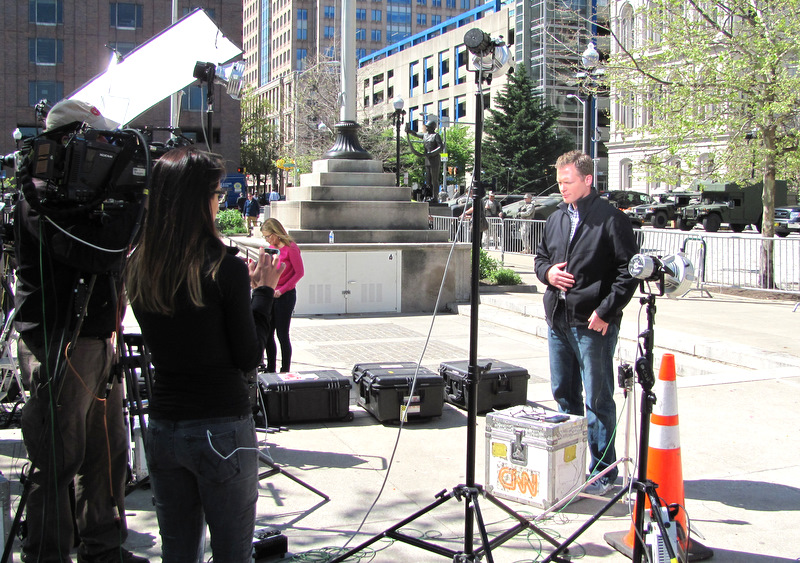 CNN is one of dozens of media outlets jockeying for space today in front of City Hall.. (Photo by Mark Reutter)

Today CNN’s Ashleigh Banfield took her turn to defend the (by now hopelessly racialized) word “thugs,” and lectured Stokes for using the n-word to condemn it.

Other local officials have had similar media skirmishes, including state Sen. Catherine Pugh who mixed it up with Fox News’ Geraldo Rivera. Pugh condemned the violence, but said the media was inciting people and should “move back.”

But perhaps the lengthiest exchange was between Baltimore activist DeRay McKesson and CNN host Wolf Blitzer.

“I just want to hear you say it”

“You want peaceful protests, right?” Blitzer began. McKesson, after a pause, said that he did, but went on to also say this:

Blitzer replied: “But at least 15 police officers have been hurt, 200 arrests, 144 vehicle fires – these are statistics. There’s no excuse for that kind of violence, right?”

“Yeah, and there’s no excuse for the seven people that the Baltimore City Police Department has killed in the last year either, right?” McKesson shot back.

“We’re not making comparisons,” Blitzer countered. “Obviously, we don’t want anybody hurt. But I just want to hear you say that there should be peaceful protests, not violent protests, in the tradition of Dr. Martin Luther King.”

“Yeah, there’s should be peaceful protests,” the community organizer replied. “And I don’t have to condone it to understand it, right? The pain that people feel is real.”

To see the complete exchange:

Send in the Satire

Perhaps comedians have had the most incisive commentary on events in Baltimore and the coverage by some of the mainstream press.

The Onion “story” on the post-Freddie Gray violence was: “Baltimore Residents Urged To Stay Indoors Until Social Progress Naturally Takes Its Course Over Next Century.”

Their “quote” from City Hall:

“Given the ongoing situation in our city,” Mayor Stephanie Rawlings-Blake said, “we ask that everyone remain within their homes for the next 10 or 12 decades while the various barriers to equality and opportunity for all people are slowly chipped away.”