There is no longer open civil unrest on North Avenue or large protests outside the police station on Mount Street.

But turmoil in the neighborhoods where Freddie Gray was arrested and detained by police is driving up violence to levels not seen in years.

In the 28 days between April 19 – the day Gray died from spinal injuries while in police custody – and last Friday, Baltimore’s Western Police District has reported six homicides, 20 non-fatal shootings and 25 total shootings.

Homicides and non-fatal shooting are running 300% and 400%, respectively, above the same period in 2014, according to police data reviewed by The Brew.

The eruption of street violence is not limited to Western, however. Here are some other chilling numbers from the latest crime incident report:

• There have been 14 shootings in the Northwestern District over the same 28-day period. That’s a 1,400% increase from zero shootings last year. 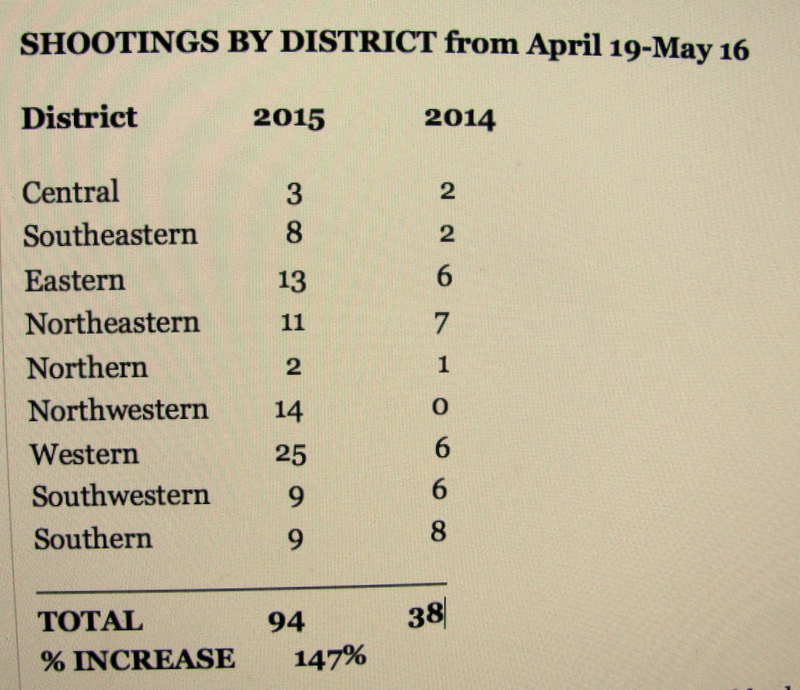 The surge in violence continued this week. There was a brazen daytime shootout on Wednesday across multiple blocks of McElderry Park in East Baltimore. The violence left one dead, four wounded, scores of terrified residents and major streets blocked off by police crime tape.

Early yesterday, police reported the 100th homicide of the year – an unidentified male shot on Ramblewood Road in far Northeast Baltimore who later died of his wounds.

Another unidentified male was shot in the incident and is reported in serious but stable condition at an area hospital.

Build-up Before the Riot

Crime data also show that the increased violence did not start with the Freddie Gray incident. Across the city, shootings gathered momentum during the winter months for so far unexplained reasons.

Top police officers, in fact, had suggested that crime would drop after January’s introduction of a new contract with the Fraternal Order of Police that traded higher officer pay (a 13% wage boost over three years) in return for more flexible work schedules and reportedly more “boots on the street.”

Mayor Stephanie Rawlings-Blake promised, in her March 2015 “State of the City” address, that the new contract would produce “real results for residents: more officers during peak times [of crime] and a faster response to citizen calls.”

City budget officials, meanwhile, said the new contract would reduce police overtime costs, which had skyrocketed in the first half of the current fiscal year. 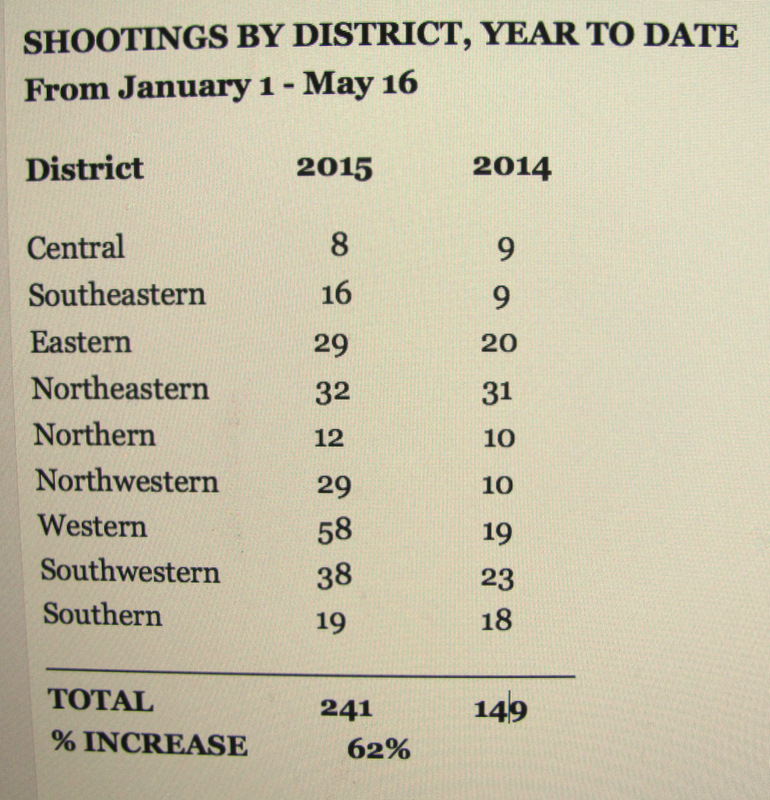 (Overtime is now projected to increase by another $10 million because of the civil unrest, Police Commissioner Anthony W. Batts disclosed on Wednesday.)

But some dynamic on the streets did change after the riots that broke out after Freddie Gray’s funeral on April 27, when police proved ineffective in stopping the looting and burning of  “cut-rate” liquor stores and corner grocery shops that dot the Western and Eastern districts.

Since then, the city’s smallest police district geographically has experienced the biggest tsunami of shootings and stabbings.

Bound by Fremont Avenue on the east and Walbrook Junction on the west, the Western District encompasses some of Baltimore’s poorest and most blighted neighborhoods.

They include Penn North, Easterwood, Coppin Heights, Midtown-Edmondson, Harlem Park and Sandtown-Winchester that have been crumbling in slow-mo physical deterioration and depopulation for decades. 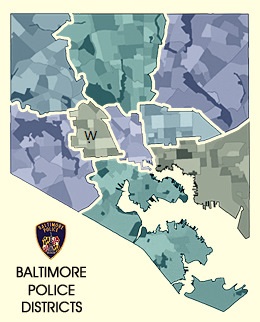 Baltimore’s Western Police District is indicated with a “W.”

This district was at the center of the protests and unrest that erupted after Freddie Gray’s arrest and death.

In his first press conference since the riot curfew was lifted on May 3, Commissioner Batts spoke yesterday of “the new normal” confronting the department as it tries to repair relations with residents who resent, fear and have seemingly lost trust in local law enforcement years ago.

“We’re going to have to change and adopt to the community as best as we can. There’s no two ways about it. It’s not just Western. It’s in how we police the entire City of Baltimore,” he added.

Batts: Crime is Under Control

He asserted, however, that the current wave of violent crime did not represent a general breakdown of law and order. He cited Northeastern District as “doing a good job taking guns off the street.”

“The Eastern is doing a good job engaging,” he said. “The Southern continues to be lower in crime. Southeast is still engaging. . . Clearly the violence is in that Western District. That’s going to be our focus and epicenter to get our organization back on its feet. . . and get that under control.”

Acknowledging that arrests were down since criminal charges were filed May 1 against the six officers involved in Freddie Gray’s arrest and transport, Batts was asked if officers were “holding back” in enforcement.

“I think it is a time of uncertainty within the organization,” he replied. “What I can tell you is that my big concern is, a lot of offers are engaging. We’re getting guns off the street still. We’re making very good arrests. We’re doing certain searches and seizures. So throughout the city, the organization is doing well.”

Cameras in Their Faces

However, he said, Western District officers are having trouble doing “basic police work” since the riot.

“Officers tell me that anytime officers pull up to respond to a call, they have 30 to 50 people surrounding them at any given point in time. We have to send out multiple units just doing basic police work in the Western right now,” he told reporters. 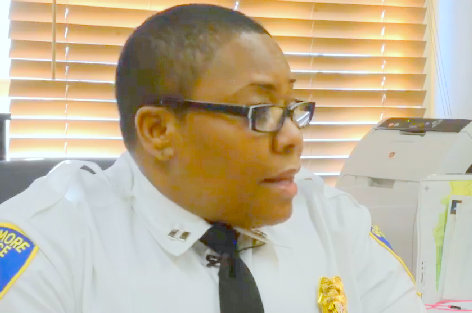 Saying that residents are sticking cellphone cameras “in the faces of officers,” Batts said police are finding it difficult to interview eyewitnesses and gather crime information, adding that “there is a sense of hostility or aggression around the police officers.”

To “take the temperature down” and repair relations with the community, Batts said he has permanently assigned Lt. Col. Melvin Russell to the Western District.

The former Eastern District commander was earlier promoted by Batts to oversee the department’s community policing program, one of Batts’ initiatives after he succeeded Frederick H. Bealefeld III as commissioner in September 2012.

Russell will serve in an advisory capacity, while Cap. Sheree Briscoe will be transferred back to Western from Northwestern to run day-to-day operations.

She has an excellent relationship with local residents, Batts said. Several other command officers with experience in Western will be transferred to the district.

But Batts said that the issues at Western District are “larger than the police department.”

He said he has talked to many people recently who didn’t express anger at the police, but simply said, “we need help” – for example, neighborhood centers that would provide information on health issues and how to find a job.

But in so many of his conversations with “grassroots” citizens, “they keep coming back to the issue of recreation.”

The PAL centers were seen as “a safe zone,” Batts told reporters, where kids “are not going to get hit or hurt, and it has structure.”

Twenty years ago, the department sponsored a network of more than 10 PAL facilities. The last two of them, Bocek in East Baltimore (located near the scene of Wednesday’s shoot-out) and Rosemont in West Baltimore, were closed to regular programming in 2009.

The facilities were permanently shut down in August 2012 – along with four youth rec centers – in a budget-cutting move by the Rawlings-Blake administration.

Batts said he didn’t think his agency had enough funds to restart the Police Athletic League, but said he wants to cooperate with the Department of Recreation and Parks and encourage police officers work with children at rec centers.

“We did an experimental program last year where we brought in 150 kids. We fed them breakfast, we fed them lunch at our police academy as a camp for three weeks. Now we’re looking at how we can do that for 300-400 kids this year.”

Batts said much more community outreach was needed, explaining, “This police department has been built into a one-dimensional mechanism. What we’ve been trying to do is to expand into three dimensions and become more a part of the community.”

Why not resurrect the “Officer Friendly” program, in which police officers talked to elementary school students about police work and safe habits in crossing roads, he was asked.

“Officer Friendly was long before my 2½-year tenure here, but I do know what I have been trying to do with the explorer camp is to get back to the concept of that. Which is having police officers interact with young people within a community in a positive way, and not in a way where you’re coming in and taking a relative to jail.”