There was high drama at a meeting in Sandtown-Winchester last night to begin the process of creating a community association – something this long-struggling neighborhood hasn’t had in more than a decade.

Former Mayor Sheila Dixon showed up and three representatives from the administration of Gov. Larry Hogan came as well. And a man with a 36-year heroin habit rose to declare his gratitude for the local Penn North Recovery treatment program. (And those were just some of the personalities seated in only one row.)

“I’ve been high every day since 1979,” Patrick Battle announced. “I walked into this program six days ago and I’m six days clean.” The applause for Battle was warm, for the Hogan people polite and for Dixon, thunderous.

But for activist and bmorenews.com producer Doni Glover, the longtime Sandtown resident who emceed the meeting of nearly 100 people, the headline was that residents themselves were taking charge of their proud but battered community’s recovery. 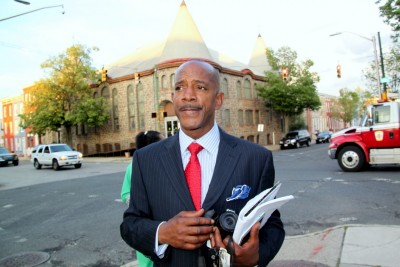 “Since this whole Freddie Gray thing, this is the first one of these meetings where they asked the people who actually live here what they think,” he said, speaking with The Brew outside the Penn North Community Resource Center at 1610 North Carey Street.

Glover called together veterans of the days when Sandtown-Winchester had not only a community association but a community newspaper, a senior center, an AmeriCorps program, and numerous youth programs and community development corporations. In attendance were Marsha Bannerman, Craig Jernigan, Richard Burton, Darius George Hall, Marvin Hayes and many others.

“We just have to do something,” said Hayes, who coached Freddie Gray in football at the Lillian S. Jones Recreation Center. “It’s been so long since we’ve had what we need here.”

Who Will Speak for the Community?

Glover said leadership waned and resources slowed to a trickle in the late 1990s, as the Sandtown-Winchester Transformation Project, known as Community Building in Partnership Inc., finally closed down.

Over the ensuing years, businesses closed and vacant buildings have proliferated in the 72-square-block area.  Meanwhile the nearest community development corporation is the Druid Heights CDC at McCulloh and Gold streets, Glover said. 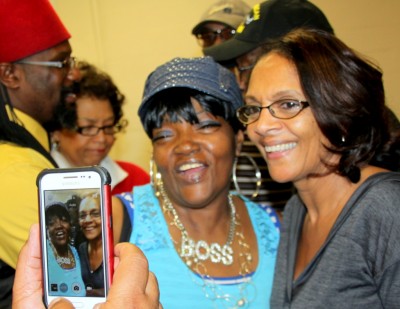 But in the coming months, with state and federal attention and funding about to flow to West Baltimore in the wake of the protest and rioting after Gray’s death in police custody, community groups are jockeying for position and the right to set priorities.

Glover said the first priority for their group is to ensure involvement by residents from the ground up, hence last night’s gathering to listen to community comment.

Several people spoke about the need for jobs, for youth and adults. “It’s not just the young people – adults like me need jobs too,” said a man, one of several to say he is looking for work.

One of the speakers who took note of that employment theme was a person who is famous for the job she lost: former mayor Sheila Dixon.

Dixon: “We Were Making Inroads”

Dixon, who resigned in 2010 following her indictment and guilty plea on corruption charges,  has been open in recent months about the fact that she is considering a run for mayor.

Dixon said she was invited to the meeting by Glover “to listen” and was not going to get political. But then, urged on by the crowd, she made what sounded pretty much like a campaign speech, starting out on the subject of jobs and youth programs.

“I was asked to come by, to listen, give some ideas, some thoughts,” said Dixon. 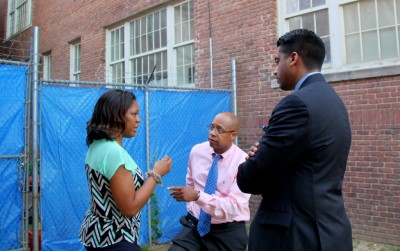 “What has happened over the years when you start working on human development issues and then administrations change, what people don’t realize is that when something is working or beginning to work, and having some good results, you don’t throw it out. You build on it!” Dixon said, seemingly referencing her successor in City Hall, Mayor Stephanie Rawlings-Blake. ” ‘Cause when you build on it, it makes it more successful and you end up getting the credit for that.”

“So now, what has happened is, as a result of the incidents that took place with Freddie Gray, the incidents that’s happening with the police department – we have great police officers – we were making inroads in going after the most violent offenders, in getting the illegal guns off the street but also community engagement, human development. Each of us has a story, each of us has a challenge, each of us has a struggle but what do we do to make sure that this young lady sitting over here. . . to make sure that she has the best future?”

Reginald Scriber, a deputy commissioner at the city Department of Housing representing Rawlings-Blake at the meeting, hastened to say that the mayor has made youth jobs a top priority.

“We want every young person to have a summer job that wants one. . . I just want to emphasize that,” Scriber said. Earlier he had promised that Sandtown would get “first preference” on any West Baltimore jobs programs.

Pissed and Ready to Work

Part of the purpose of the meeting was clearly introductory networking. Many just stood to identify themselves and say they were there to help – the U.S. Department of Justice, the office of U.S. Rep. Elijah Cummings, Catholic Charities, the Penn North Community Resource Center.

Some shared their insights as well, including longtime Baltimore police officer, Sgt. Louis Hopson. Hopson spoke of jobs, diversionary programs for young offenders and reforms needed in the department. “We don’t have enough police officers from the community,” he said, drawing applause.  Several spoke of bringing back basketball and other recreational programs for area children and teens.

Financial accountability was another concern for many, including Glover who said he cannot figure out where the $1.8 billion in federal stimulus spending in Baltimore went.

Others were angry, cynical and discouraged. “How did Sandtown get this way? We had 35 murders in this city last month and you mean to tell me the governor can’t get here?” said  a man who identified himself as Kevin, from Baltimore. ” He concluded in disgust, “Sandtown has been like this since the riots.”

Tierra Gregory, an attorney who was raised in Sandtown and left to pursue education and career goals, described herself as angry, but not defeated.

Gregory said she has returned home to join the effort to rebuild. “When I come back and see Riggs and Stockton streets where I grew up and there’s just nothing there, I’m pissed,” she said. “And I’m ready to get to work.” 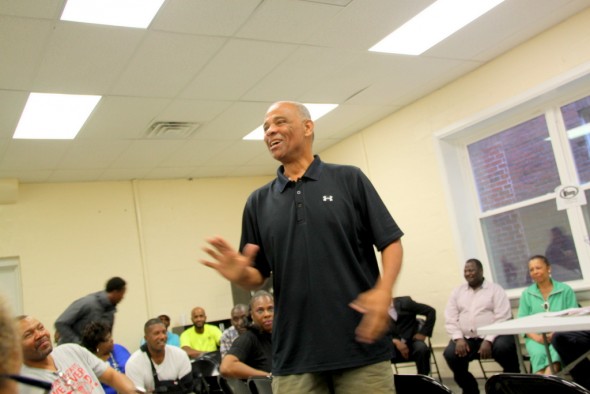 Residents offered their ideas for what a Sandtown-Winchester community organization should focus on. (Photo by Fern Shen)