That’s the amount the employees cheated the city by accepting bribes from trash haulers and stealing scrap metal, according to two grand jury indictments unsealed today.

Maryland U.S. Attorney Rod J. Rosenstein traced the dumping fee conspiracy back to 2001, and the practice of “junking,” or selling salvageable metal, to 2005.

The scams ran undetected for over a decade and “were carried forward until last month” when federal agents conducted raids and arrested the five employees, who have since been released under the supervision of pretrial services.

According to Rosenstein, Baltimore Inspector General Robert H. Pearre Jr. received a tip about “junking” in 2012 and brought the allegations to federal authorities, who deployed wiretaps and informants to crack the alleged conspiracy.

Failing to Activate the Scale

Two of the five employees, including a DPW supervisor with 36 years of city service, were charged in both schemes by the federal grand jury. Six commercial trash haulers were indicted for bribery.

The scheme was put into motion at the truck scale house of the Quarantine Road Landfill in far South Baltimore.

In exchange for free dumps, the haulers paid cash bribes, ranging from $50 to $100 per visit, which were allegedly delivered to the employees in folded paper through the scale house window or dropped off in envelopes at a designated time and place.

A uniformed Baltimore police officer is assigned to protect the scale house during work hours and accompany DPW employees when they deposit the day’s receipts in the city’s bank account at the end of the day.

But today’s indictment gives several examples of imaginative exchanges of money for favors that somehow eluded the notice of the police.

Two minutes later, Williams allegedly handed the employee a brown paper bag through the scale house window “that contained a bottle of orange juice and an open pack of gum with $500 in cash stuffed inside.” 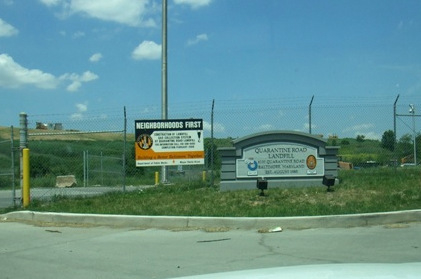 The Quarantine Road Landfill where cash was exchanged for free dumping, according to today’s federal indictment. (bradaptation.com)

In another instance, an employee of Glenn Services of Hanover, Md., tallied up what the company owed for 34 free trips to the landfill.

The employee then delivered a cash payment of $2,500 to a city employee “at a shopping center on Edmondson Avenue in Baltimore,” followed by two more payments, totaling $4,000, to the same employee at a parking lot in Glen Burnie.

Yet another hauler, Mustafa Sharif, placed his bribes in sealed envelopes deposited at an off-site mailbox after he alerted the DPW employees with a text message.

Between February and April of this year, the indictment charges, Sharif paid a DPW employee working for the government $1,300 at the mailbox site, $400 at Mondawmin Mall, $900 at Eastpoint Mall and $1,200 at a Target store parking lot.

According to prosecutors, the bribes taken by Washington, Bolden and Nemec amounted to about 20-30% of what the hauler would have otherwise had to pay to use the landfill.

“The loss to the city from the lost tipping fees is estimated to be approximately $6 million over the course of this conspiracy. In addition to that, the haulers that were permitted to dump their trash without paying the required fees were gaining a competitive advantage over haulers that followed the law,” Rosenstein said.

According to today’s second indictment, Nemec and Bolden conspired with Jarrod T. Hazelton and Michael T. Bennett in a junking scheme that involved both the Quarantine Landfill and Northwest Transfer Station on Reisterstown Road.

The defendants used their cell phones during work shifts to let each other know when and where recyclable scrap metals were being dumped, and Hazelton and Bennett used their personal pick-up trucks during work hours to collect the metal and transport it to an unnamed salvage company.

The men sold the scrap for as much as $300 per truckload over a period of nearly 10 years, the prosecutors allege.

DPW employees are supposed to regularly pick up scrap metal (such as discarded computers, copper wires, car parts, household appliances), weigh it and send a tonnage report to the city. Based on predetermined prices, the city then sends an invoice to authorized scrap companies to pay for the metal before they remove it from city property.

By stealing the choicest scrap, DPW employees swindled the city out of a substantial revenue stream. Indeed, Hazelton and Bennett allegedly used part of their illegal proceeds to pay Bolden and other DPW employees to locate, set aside and help load the scrap onto their trucks.

Nemec allegedly was paid a fee to let them transport the metal out of the Quarantine Landfill and Northwest Transfer Station.

“All they do is Junk”

The indictment gives the example of a telephone call made by a DPW employee who was collecting material for Hazelton.

“I got a sink I junked up here, one of those stainless sinks. . . and [Employee #2] got some copper. I got some cast iron plates, a bunch of shit. We want you to come up here and make us a deal on it,” he told Hazelton.

“Alright, I’ll be up,” Hazelton replied.

Hearing that one employee had complained to a supervisor that DPW workers weren’t doing their jobs because “all they do is junk,” Hazelton arranged for Nemec to visit the site and “make it look good,” according to a tapped phone call.

Hazelton, 32, and Bennett, 46, also prepared and submitted false time records, which Nemec approved and submitted to DPW, resulting “in approximately $60,000 in wages being paid to them for work they did not perform,” according to the indictment.

Speaking beside Rosenstein, Inspector General Pearre said his office was going to hire an audit manager and another agent to work with DPW to tighten up its internal controls “to eliminate the opportunity for these corrupt activities to happen again in the future.”

DPW chief Rudy Chow made the same point in a statement to The Brew this afternoon:

“In the year and a half since I became director, I have emphasized service to our customers as well as integrity and accountability among our employees. With those values in mind, I created the Office of Strategy and Performance and tasked it with making sure we are operating efficiently.

“By looking for waste, we can also stop fraud and abuse. With more than 2,600 employees, DPW is a huge agency. I am committed to weeding out the few bad actors.”