The dog days of summer in Baltimore can be hard on children, especially if they’re playing outside in the heat.

But during a recent visit to the St. Francis Center in Reservoir Hill, the 47 children signed up for the center’s summer camp were cool, busy, engaged in activities to improve their community and having fun.

Tucked in a quiet, air-conditioning cupola on the second floor, Nyelle (the center asked that the children’s last names not be published) sat in rapt attention with Bill Brownley, who volunteers in the tutoring program.

“I’m working on my reading,” Nyelle said, looking up from a copy of Tales from the Arabian Nights. 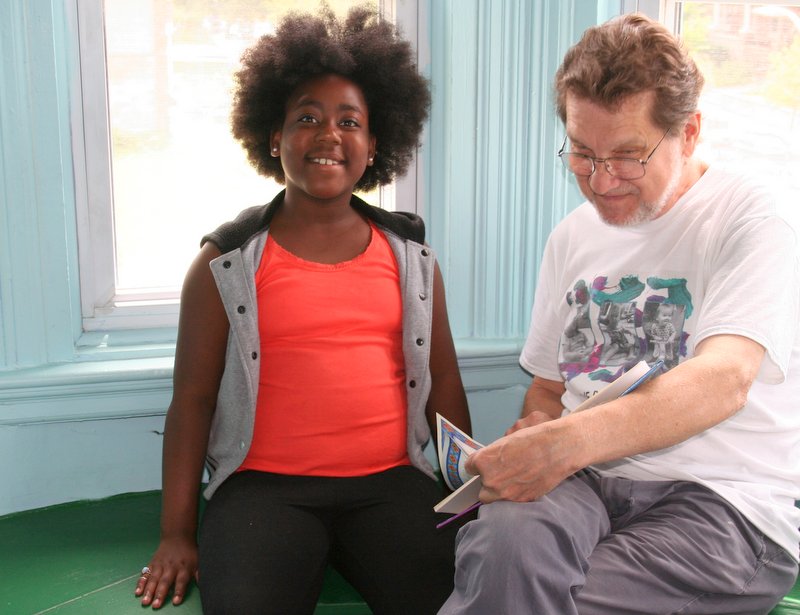 Nyelle looks up from reading with her tutor Bill Brownley. (Photo by Danielle Sweeney)

Michelle Smith, whose 12-year-old son Jamel has been attending St. Francis for six years, said the center is the best thing that has happened to him.

“This summer he is working on a drone with a team from Digit All Systems and Johns Hopkins,” said Smith, a single mom who works full time.

“The other day, the campers went on a field trip to The Museum of Industry,” she said.

“When I got home from work, you should have heard how excited he was to tell me about all of those old machines.”

Torbin Green, the center’s outreach coordinator, gave a tour of the expansive four-story house, showing off the community library and tutoring area, which doubles as a yoga room and work space.

There’s a separate room stocked with computers, many of them donated by Baltimore-based Digit All. Also a kitchen with fresh fruit for the campers’ snacks and three classrooms, including one where Code in the Schools was teaching the camp’s youngest members about technology.

Near the top of the building students were working in groups on a book about bullying, one of the summer’s five service learning project themes.

“We do a lot of our teaching through art,” noted Green. “It is part of our philosophy, informally. We bring in teachers and students from MICA, which is right across the street from us on North Avenue.” 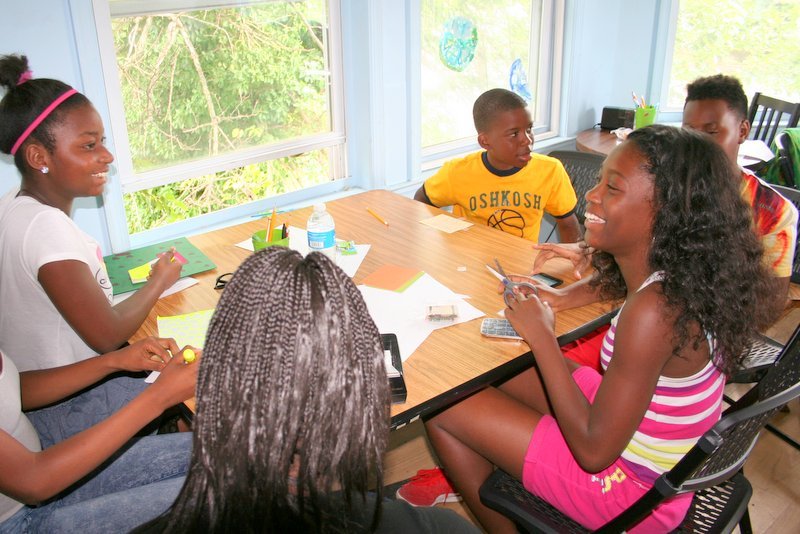 Sade, Asia, Esaiah and Jamel are working on a book about bullying. (Photo by Danielle Sweeney)

Testers on the Corner

But the neighborhood does have a duality, Green says. Like many neighborhoods on the West Side, it struggles with drugs and crime, although it’s not always obvious.

“It is beautiful here,” Green noted, talking about the effort that the center and other nonprofit partners and residents have put into taking care of the community.

But then as he walked around the center, his talk turned to the nearby city-owned “German Park” where dealers hide their wares in the park’s mulch.

“The kids, they know what drugs are and that they shouldn’t touch it and to come find one of us,” he said.

“The dealing is the worst around the first of the month,” Green added. “But to see the dealers out in the street giving out ‘testers’ [drug samples] is pretty surreal. One minute they’re here, and the next minute they’re gone.”

The Saint Francis Neighborhood Center was founded by the Catholic Church in 1963, but has been a secular nonprofit for more than 40 years, Green said. 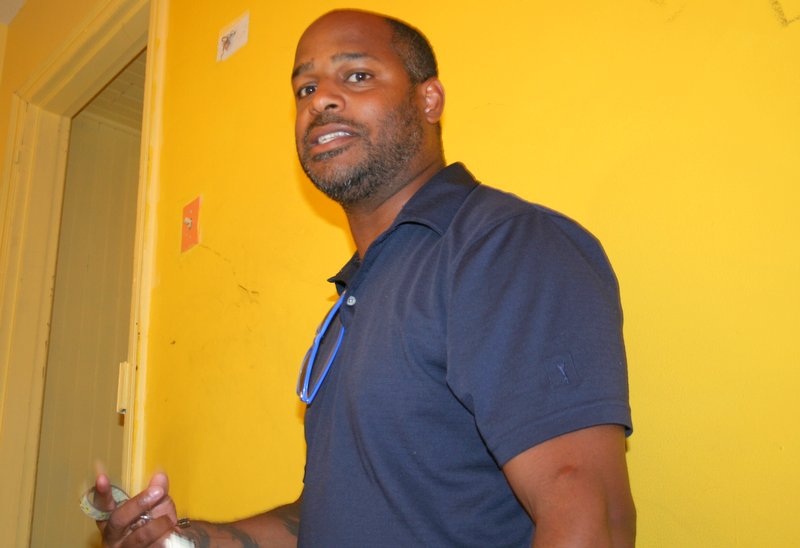 “Compasto was known as the ‘Pope of Whitelock Street’ and was a force in the neighborhood and helped keep the drug dealers at bay,” Green explained.

Today, the center’s mission is to stop generational poverty in Reservoir Hill through resources and education.

“We want to break the cycle. We have programs for the whole community, including the after-school program and summer camp, a computer lab, and classes for children and adults and a 12-step meeting as well,” he said.

“Right now, we are bursting at the seams. We have 30-some kids on a wait list for summer camp, and are likely to have the same number for after-school programs. We’re planning on launching a fundraising campaign and expanding our building. It would allow us to double the number of people we serve.” 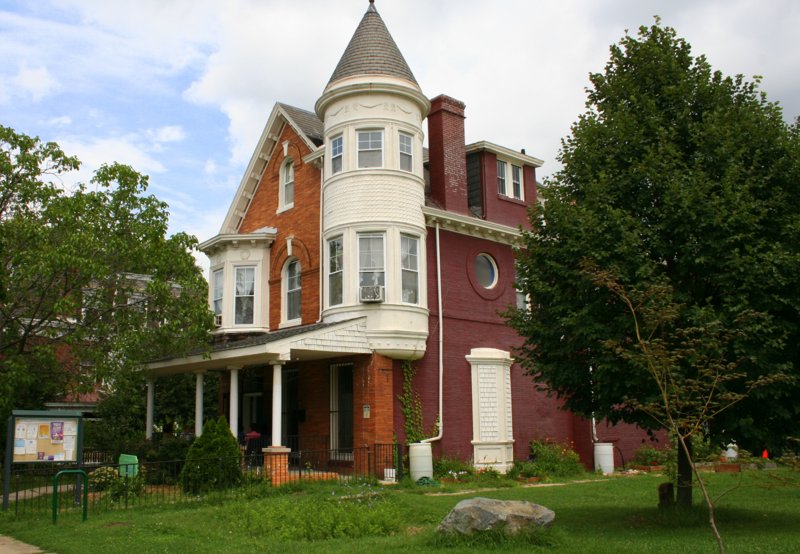 The center is located in this handsome house on Linden Avenue. (Photo by Danielle Sweeney)

In a few weeks, the center will be hosting its annual resource fair. The combination services-neighborhood party fundraiser will offer 27 resource booths (health screenings, wellness), a music festival with bands, food trucks, such as Gypsy Queen, and entertainment for all ages.

“Whole Foods is giving out bags of groceries, and we’ll be giving away bags of school supplies,” Green said.

Asia, one of the young people working on the fair’s planning committee, shared her vision for the fair. 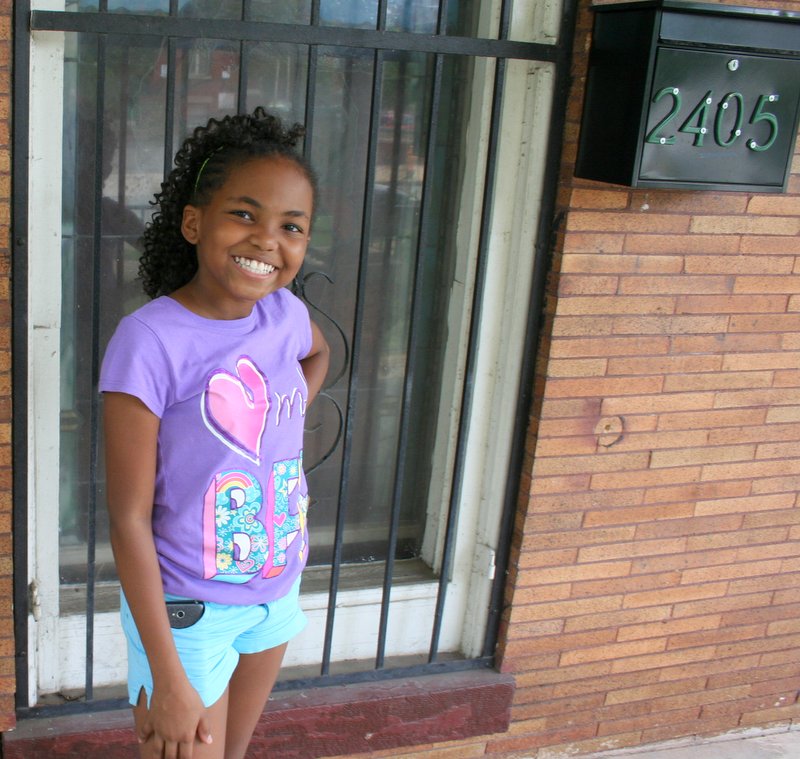 11-year-old Asia talks about her ideas for the Community Resource Fair. (Photo by Danielle Sweeney)

“I want to tell you about some of my ideas. It’s going to be hot, so I thought we would have a splash zone for the kids. We’ll have water balloons and squirt guns and water games,” the 11-year-old said with confidence.

When asked about snowballs and a slip and slide, she said they were a good ideas, but probably not on the menu this year.

“But we will have a $1 raffle – to raise money for the center,” Asia said. “And we, the kids, will be selling our artwork and decorated flower pots, and jump ropes we made out of recycled materials, and maybe t-shirts too.”

“That’s what I was thinking so far,” she concluded, saying, “Good ideas, huh?” 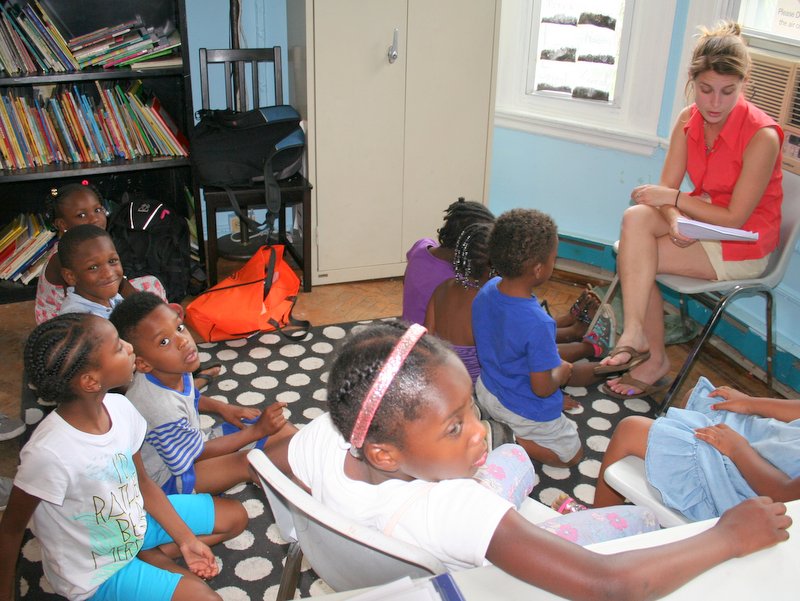 Jessica Leiberman, from Code in the Schools, teaches some of St. Francis’s youngest campers about technology. (Photo by Danielle Sweeney)