In a scathing letter emailed to Baltimore schools officials and the city school board, state Senator William C. Ferguson IV accuses officials of dropping the ball on managing a merger of two high schools and putting students’ academic future – and potentially their health – in jeopardy.

On an unannounced visit to the New Era Academy yesterday, where students from Maritime Academy are being moved this September, Ferguson said he found portions of the complex in a severely dilapidated condition.

They have live wires, mold, lead paint chips flaking on window fittings and carpets “that are surely a respiratory health hazard, and insect and rodent infestation throughout,” he noted in an email that included dozens of photos of what he saw.

“City Schools failed to make good on any of its commitments,” wrote Ferguson, who represents the city’s 46th district, referring to the ongoing merger of Maritime Academy and New Era Academy at New Era’s Cherry Hill campus.

The poor state of the campus was clearly a shock to Ferguson, who had been involved from the beginning in negotiations to open it up to students from Maritime, whose building on Sinclair Lane in Northeast Baltimore is being closed by the school system.

“Maritime Academy is being hung out to dry,” he said today in an interview with The Brew. 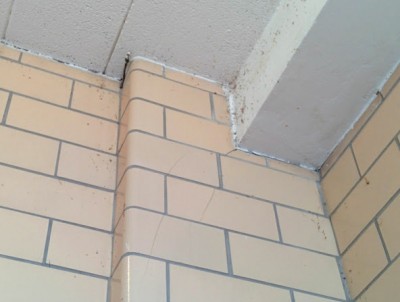 In January, schools CEO Gregory Thornton and the board approved the relocation the Maritime Academy to the New Era campus. Under the agreement they worked out, a merger of resources was scheduled to take place this summer, followed by a full legal merger in school year 2016-17, Ferguson wrote.

But although City Schools and the School Board had “guaranteed and made absolute commitments to development of a shared resource plan,” Ferguson wrote that nothing has been done.

“What I saw and what I learned of the status of this interim plan is absolutely inexcusable, and I am now gravely concerned that this systemic failure will severely damage children’s futures – damage that may be irrevocable,” Ferguson said today.

He singled out CEO Thornton for failing to ensure that the merger would be managed successfully,

“Thornton has the authority to help support the merger. We had so many meetings with City Schools. They just lied,” Ferguson said.

City school officials have not yet replied to a request from The Brew for a response.

Ferguson, who said he had been hearing about the merger being “challenging,” stopped by New Era/Maritime to check on its progress.

“I just walked in the front door,” he said. 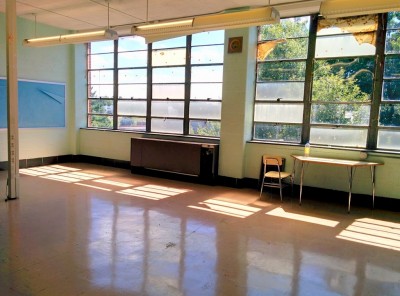 A classroom at the New Era Academy where students from the Maritime Academy are being moved. (Photo by Sen. Bill Ferguson)

He said he saw Maritime janitorial staff and teachers cleaning up substantial amounts of trash so a moving company could take in desks for the students.

“There was no help from the central office,” said Ferguson, who noted managerial problems as well.

“There will now be two principals at the building, two separate programs and no clear plan for resource sharing,” he wrote, noting that at this point neither school is fully staffed.

Nor is there any plan to prepare the two school communities to be in the same building in three weeks.

In his email last night, a copy of which was obtained by The Brew, Ferguson implored city schools officials to meet him at New Era this afternoon to sort out the mess.

He said today that he has not gotten a reply from City Schools and received only two responses from School Board members, one of whom was away.

“I honestly don’t even know if anyone is going to come,” he said.

“Relocating children from another part of the city into the conditions that I saw today cannot happen,” he said. “At the very minimum, the central office must invest and rehabilitate this building for a new school year.”

The two high schools together have about 525 students, he said.

Commenting on what appears to be a botched merger, Ferguson describes what happened as “unconscionable” and “a betrayal” that disrespects students and parents.

”The community leaders in Cherry Hill have been absolutely tireless, fighting for their community and for the hope and promise of their children’s futures,” he said.