When two young men put a gun in his face as he walked along a Canton street recently and said “Give us all your shit,” Tyler Compton resisted, pushing one of them by the shoulder and then running.

When Nicole Hanson, of Barbara Avenue, called 911 about a man trying to pry open a window on the house across from hers, police came but let the burglar elude them, leaving her wishing they were more familiar with the area.

When Tom Culotta surprised a burglar in his home on Druid Park Drive – a professional wearing surgical gloves who had stacked Culotta’s belongings in preparation for stealing them – he had to wait for police for 45 minutes after he called 911.

In neighborhoods across Baltimore this summer, crimes of many kinds – not just homicides – are spiking, and a short-staffed police force sometimes arrives late, if at all.

Baltimore Police report an increase in most categories of property crime in 2015. Here is the breakdown through August 22:

“Maybe it’s time for people to take more of an active role in policing their own communities,” Hanson proposes, citing the 300 Man March organization as one way of doing so.

Led by Munir Bahar and City Councilman Brandon Scott, the 300 Man group meets in the northeast neighborhoods of Belair-Edison and Four by Four every week, runs street engagement and violence-prevention programs, and is expanding its reach throughout the city.

“They are policing our community for us, getting out in the neighborhoods and preventing trouble from happening,” Hanson said. “Baltimore’s going to need an organization like that.”

Face to Face with a Burglar

Culotta, who felt the response to his burglary was poor, just wants an effectively run police force.

The shortcomings of the police pains the longtime city resident, who says he’s had a good relationship with individual officers and district commanders.

“I am sick of the way police in Baltimore have been painted with a broad brush in the last four months,” he said, referring to the period following the death of Freddie Gray in police custody. “There are some really good actors here.”

Culotta says his recent experience with crime left him with insights not so much about bad policing as bad policing policy. It happened earlier this summer, at a time when nearly a dozen of his neighbors were burglarized within two blocks of his home.

A neighbor contacted Culotta, who works at a city school, saying he noticed Culotta’s door ajar.

Upon arriving, Culotta didn’t see any police, but he did see his kicked in door, ransacked house and purloined property stacked in piles ready to be carried off by the burglar.

Culotta chased him out of his house. The thief jumped down two sets of outdoor steps before getting away empty-handed. 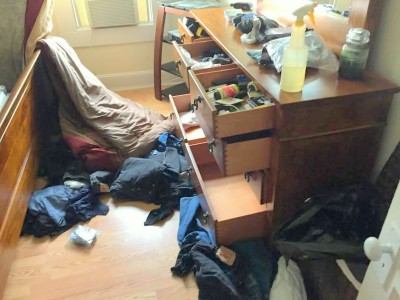 A room in Tom Culotta’s house after a burglar ransacked it. (Photo by Tom Culotta)

Culotta phoned the police a second time, about 30 minutes after his first call. At this point, Culotta says he had a great description of the burglar, who was still in the neighborhood.

“The police could have captured him, had they answered the first or even second 911 call,” he says.

But Culotta was put on hold – for two phone tree cycles – before hanging up in defeat.

A police officer finally showed up about 45 minutes after Culotta’s initial 911 call. The officer took a report and offered to send out the crime lab, but since the burglar wore gloves, Culotta says he declined.

Later, as he followed up on his case and the other subsequent burglaries in the neighborhood to see if the thief had been caught, he said a police commander told him something that made him feel even worse:

Police detectives don’t really investigate residential burglaries where less than $10,000 worth of items have been stolen, the commander said.

(The policy, Culotta said, was publicly confirmed by another district officer at a meeting of the Woodberry Community Association. A police source confirmed it “off the record” to The Brew as well.)

“Detectives are ordered not to touch those,” Culotta says he was told.

“It’s a Central Office policy and has been in effect since at least the winter,” Culotta said, explaining why the mandate bothers him. “It’s unfair to working people.”

(The policy does not appear to apply to commercial burglaries, which detectives investigate no matter how little is stolen.)

After the burglaries, Culotta met with Northern District commanders and asked for a step-up in patrols. He said there has been an increase in police presence, and that local commanders are doing walks in the communities every week.

Even so, Culotta says police response time in his district remains unpredictable.

“Last week a house on Malden Avenue with a security system got burglarized,” Culotta told The Brew. A neighbor, who called 911, watched the Malden Avenue burglar exit, fill a trash can on wheels with stolen goods, then walk with the wheeled trash can toward Park Heights.

It was 45 minutes before the police arrived at the scene. “I know the police are short-staffed,” he said ruefully, “but that’s where we are now.”

Unfamiliar With the Community

Hanson, who lives on Barbara Avenue near Frankford Avenue in Northeast Baltimore, doesn’t complain of slow response time. Soon after she called 911 to report a burglary in progress at a neighbor’s home, police came.

But when they chased the burglar, who was running away from the house, through a small wooded area, it was clear they didn’t know the terrain.

“What they should have done – would have done if they knew the neighborhood – was to catch the thief on the other side as he ran out,” she recalled. “I respected their attempt, but the only people who should have been running through the bushes are people who know how to get out of them.”

“The burglar outwitted them,” she said. “He used the woods to get away.”

Hansen, who has lived in the area for about 20 years, said crime has increased greatly that over time. If the police aren’t able to protect citizens, then citizens are going to have to step up.

On the Facebook pages for neighborhoods across the city, residents are trying to protect themselves by sharing information, posting accounts of attempted break-ins, discussing security camera strategy and more.

On the Patterson Park community’s page, one poster recently reported that someone had just shattered the front glass door of her house on Decker Avenue. (She was seeking security camera footage to find the culprit.)

Matty Woodruff recently posted video on the page of another kind of vandalism – young men trying to destroy his security cameras.

Security cameras like those mounted on Woodruff’s house in Patterson Park.

“I have video of one of them throwing a brick at the camera,” Woodruff said. “The other two told the one kid which one to take out.”

Woodruff has installed the cameras to have a nearly panoramic view of nearby homes and alleys. Footage he has turned over to the police has provided evidence in about a dozen incidents, so far resulting in two convictions.

Police are eager to see the surveillance footage. “When you tell police officers you have video, they are usually here within 15 minutes to take a report.”

(He suspects the assault on the cameras may be in retaliation for submitting evidence.)

Woodruff, who purchased his cameras after 26 neighbors got their cars “keyed” in a single night, says crime this summer is the worst he’s seen in the Patterson Park area in the last four years.

Tyler Compton doesn’t view city living through rose-colored glasses. A former girlfriend was mugged in Canton last year – hit on the head during the day – just two blocks from his house.

Not long after, friends had a bike stolen at a Baltimore Bike Party event in Seton Hill. “A swarm of 25 kids came after them,” he recalled. “It was one nasty night.”

Compton was not a crime victim himself until earlier this month when the two men held him up at gunpoint in Canton Square at 2 a.m.

Instead of acquiescing, he grabbed one of the assailant’s shoulders, threw him to his side and ran – yelling for help until he saw a group outside a bar and stopped to call 911.

The police arrived within a few minutes, he said. With Compton’s description, police quickly located the suspects walking north in Patterson Park.

Compton was rattled, but identified the young men and the gun, which turned out to be a BB-gun, later that night. He says the two were charged with armed robbery.

Compton, who owns a home in Canton, said the attempted armed robbery was “eye-opening” and changed the way he feels about his safety.

“Its not safe to walk alone at night, not in Canton, not anywhere, especially in the summer when kids are out of school,” he has concluded.

Despite his frightening experience, Compton says the robbers haven’t stolen from him his commitment to the city.

“For every bad story you hear about Baltimore, there are a hundred more good ones,” he said. “I love this city. My neighborhood has many quality people trying to move the community in a positive direction.”

Link to an interactive “Heat map” that uses Open Baltimore data, and shows property crime in Baltimore from May 1 through August 15, 2015. (Includes burglaries, larcenies and robberies and doesn’t include “larceny from auto.”)