Saying that getting re-elected in “a hotly contested campaign” would have distracted her from her duties as mayor as the city recovers from rioting and violence, Stephanie Rawlings Blake announced today she will not run in the April 2016 primary.

“It’s not that I didn’t think I could win, but I just had to ask myself the question, ‘At what cost?’” Rawlings-Blake said at a hastily-called news conference at City Hall.

Reading from prepared remarks, maintaining her composure but with the words sometimes tumbling out rapidly and a catch in her voice, Rawlings-Blake even employed some of her trademark dry humor.

“I haven’t lost an election since middle school,” she remarked at one point.

Saying she looks forward to spending more time with her family, she cracked that her husband “is hoping that maybe I’ll start to cook.”

But Rawlings-Blake acknowledged that her poll numbers “took a dip,” a decline in her approval ratings that she said was “understandable with the violence that’s been happening.”

Asked if she would be making this decision if the city hadn’t erupted into rioting in April after Freddie Gray’s death in police custody, she bristled.

“No. I started off by saying that. You know this is – we don’t choose. Right? You know, you play the cards you’re dealt,” she said.

“The city is in a very critical time right now. We’re working very hard to reform the police department. . . We have to get our city through six separate trials.”

But didn’t you, she was asked, make yourself a lame duck?

“No, I made myself someone who is committed to doing the work of the city,” she said.

Thinking About it for Two Months

Rumors were flying in the city last night that Rawlings-Blake might be dropping out.

A crowded field of challengers has been hovering, announcing their intention to run against her as the April primary draws near.

The 45-year-old Rawlings-Blake was elected in 1995, took over as mayor in 2010 when Sheila Dixon resigned amid a corruption scandal and handily won election in 2011.

But she was coming under increasing fire, most recently for her handling of the protests and rioting in April and May.

Asked when she made the decision, Rawlings-Blake said she has been thinking about dropping out for the past two months.

She mentioned asking a women’s group to pray for her to have “clarity and discernment” and “woke up the next day feeling very clear that I have to focus on getting us through these challenges.” 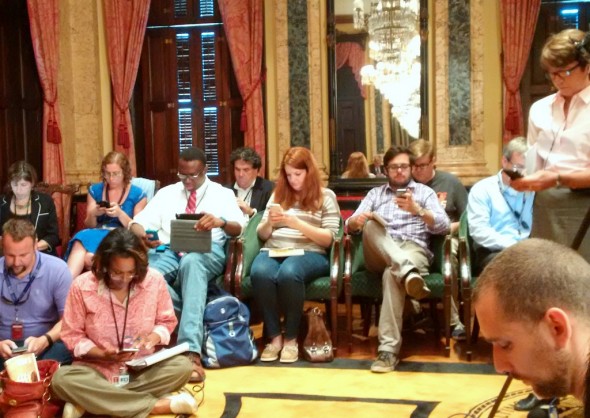 At City Hall, the press corps waits for Mayor Rawlings-Blake to enter. (Photo by Fern Shen)

She deflected a question about whether she would run for some other office (“That’s not the announcement that I’m making today”) and declined to answer a final question asked as aides ushered her out of the room: “How long will you continue as head of the U.S. Conference of Mayors?”

Asked if she had been having trouble raising funds or finding volunteers, she said no.

“My campaign infrastructure’s the strongest it’s been in years,” she said.

But her gut reaction to early campaign activities, she said, showed her something.

“I constantly had the feeling that I should be back at City Hall,” she said. “I knew that I needed to spend time, the remaining 15 months in my term, focusing on the city’s future, and not my own.”