The Confederate Soldiers and Sailors Monument in Bolton Hill was tagged recently with the message: “Black Lives Matter.”

Activists have called for the city of Baltimore to take down the Robert E. Lee and Thomas J. “Stonewall” Jackson Monument in Wyman Park Dell.

Exactly three months after the June 17 shootings in Charleston, S.C., prompted cities across the country to reevaluate the way they display statues and monuments associated with the Confederacy, a new public commission has formed in Baltimore to look at what the city should do with its Confederate monuments.

The Special Commission to Review Public Confederate Monuments met yesterday to map out a strategy for taking public comment and recommend possible ways to treat four publicly-owned statues or monuments with a link to the Confederacy.

More than two dozen people attended, with speakers expressing a wide range of views and all agreeing on the importance of the group’s work.

“I think it’s a wonderful idea,” said Katherine Howard. An attorney who lives in the city, Howard suggested that the commission put information about its mission in everyone’s water bills so more people will know about its work and have a chance to make suggestions.

Besides the Confederate Soldiers and Sailors Monument (also known as the Spirit of the Confederacy) on Mount Royal Avenue and the Lee and Jackson Monument, the works include the Confederate Women’s Monument of Maryland, located in Bishop Square Park in North Baltimore, and the Roger B. Taney Statue in Mount Vernon Place, a monument that depicts the man who wrote the Dred Scott decision.

The four proposed actions are:

• Leave the work exactly as it is.
• Keep the sculpture with conditions, such as new signs or other changes to help explain it or put it in context.
• Relocate the sculpture, but keep it as part of the city’s inventory.
• Remove the sculpture and de-accession it from the city’s collection.

The result of the panel’s work will be “a report that has recommendations to the mayor on what we should do with these statues,” said Eric Holcomb, director of Baltimore’s Commission for Historical and Architectural Preservation (CHAP). 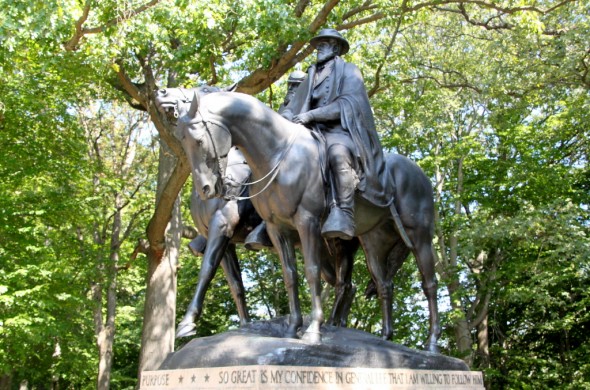 Holcomb is serving on the panel along with Ryan Patterson, public art administrator for Baltimore’s Office of Promotion & the Arts and coordinator of the city’s Public Art Commission.

Patterson said he believes the product of the commission’s work will be “the thoughtful review of history and the contexts of these sculptures and recommendations for the future.”

Aaron Bryant, a Baltimore resident who works for the Smithsonian Institution’s soon-to-open National Museum of African American History and Culture, is the commission’s chairman.

Panelists include four members of CHAP, three members of the Public Art Commission and Casey Brent, a representative of the Mayor’s Office. Brent missed the inaugural meeting.

South Carolina was the first state this year to remove items related to the Confederacy when it took down the Confederate flag from the State House grounds.

(Photos that had surfaced of Dylann Roof, indicted in the shooting of nine people in a black church in Charleston, showed him posing with the Confederate flag, igniting nationwide debate over public references to the Confederacy.)

Since then, other cities and states have begun to evaluate their own holdings to see what Confederate-related statuary or artifacts may be offensive to residents or inappropriate for display on public property.

Mayor Stephanie Rawlings-Blake announced the creation of a special commission last June, making Baltimore one of the first cities to form a separate panel to look at its holdings.

“It is important that we recognize the delicate balance between respecting history and being offensive,” the mayor stated.

By bringing together representatives from the art community and historians and gathering public testimony, “we have a better chance of understanding the importance of historic monuments – not only the significance they have in our history, but the role they should play in our future,” she said.

The commission will conduct a comprehensive review of Confederate monuments on city-owned property, including gathering research and soliciting public testimony.

As part of its research, the commission will gather information on how other cities have handled similar circumstances regarding historic monuments, looking at Confederate-era statues in American cities and elsewhere.

Some at the group’s inaugural meeting shared opinions about what they hope will come out of the process.

Timothy Ingles said he lived in Bolton Hill until recently and his daughter attended the Midtown Academy charter school there. He said he was troubled that his daughter could see the Soldiers and Sailors Monument from the entrance to her school. He said he thought the panel should take into account how the city’s Confederate monuments impact the education of children in the city. 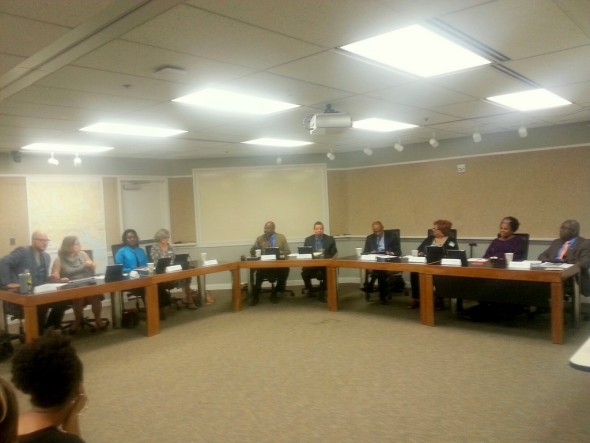 Commission begins its review of Confederate monuments in Baltimore. (Photo by Ed Gunts)

Nancy Eubert, a city resident, said she would like to see the monuments updated to provide additional information about how people “got along” during the Civil War era.

“I think it’s a waste of money,” Eubert said of the option of moving works around or removing them. “Don’t move anything, but add more information. Explain how we all got along. There are too many other things that need money before we go and move everything.”

Adrian Bishop, coordinator for the Stony Run Friends Meeting, also said he would like to see the monuments updated with information that gives them more “context.”

“I personally have no great objections to old statues as long as we can give some modern context to what is going on,” Bishop said.

The October meeting will look at how the monuments came to be commissioned and legal “obligations” that could affect how they might be changed.

The December meeting will include looking at the city’s options and what other cities have done with their Confederate statues, such as “recontextualizing” them, as well as taking public testimony about Baltimore’s monuments.

The January meeting will be used to draft recommendations to send to the mayor.