A flash mob of movers and shakers thronged the big warehouse space on Greenmount Avenue today – foundation heads, the lieutenant governor, a Congressman, college presidents – but Nick Yates, a big grin on his face, was thinking about high school kids.

Yates teaches Engineering Design at Patterson High School in East Baltimore and he is hoping to lock in a partnership with Open Works, the unique organization taking shape in this big, gutted industrial building.

If it takes off as its founders hope, this “makerspace” will be a hive of activity with craftsmen, artists, inventors, tech entrepreneurs, small-scale manufacturers – a diverse collection of people with well-equipped studios and production facilities all provided at affordable month-to-month rates.

Construction of the $11 million incubator is not expected to be completed until fall 2016, but Yates yesterday had the blissed-out look of someone who could almost see it in front of him.

“Our senior engineering students work on a year-long project. They would love to be able to come here!” Yates said, explaining all the things his kids could do with better equipment and some teachers and collaborators. 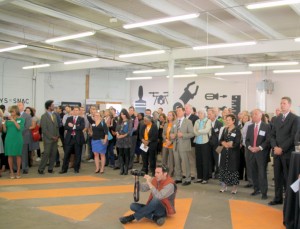 Patterson has a CNC router (a computer-controlled cutting machine), but it’s small, he explained.

“It can only make prototypes this big,” Yates said, his hands in the air describing something about the size of a brick.

“Here they could do bigger prototypes, electronic prototypes, soldering. They could benefit from all the interesting people that are going to be around here.”

Even with their limitations, Yates said, he’s watched his students do amazing things in nine years of teaching at Patterson.

One invention that has taken off (the students are applying for a patent) is a de-soldering tool, a pen-sized device that pushes through solder and unclogs printed circuit board holes quickly.

Now students Javon Gholston and Michael Heier have launched a business, Power to the PCB, to sell their “solder puncher.” (“The tool that doesn’t suck – but its competitors do!” they say on their elevator pitch video.)

The boys’ story is one example of the kind of creativity, entrepreneurship and success that founders hope to kindle at Open Works, a project of the non-profit Baltimore Arts Realty Corporation (BARCO).

MacLure said the 34,000-square-foot facility, located in the Station North Arts and Entertainment District, is meant not only to jump-start Baltimore’s economy and manufacturing sector but to benefit the surrounding neighborhood as well.

Once completed, Open Works will house a wood shop, metal shop, and digital media studio along with a digital fabrication shop (CNC routers and laser cutters), a 3D imaging and 3D printing studio, a microelectronics lab and a textiles studio. The facility will provide 150 individual micro-studios (50-square-foot work spaces) for designing, assembling, and finishing projects. 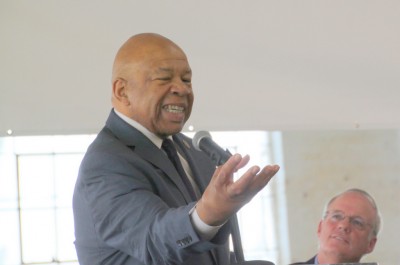 Financing for the project comes from a blend of public and private sources.

The Goldseker Foundation also has invested in the project through a grant for BARCO’s operating expenses.

BARCO is the non-profit real estate company sponsored initially by the Deutsch Foundation that has been active in Station North, acquiring the Load of Fun building, now known as Motor House.

Speakers from Annapolis sought to align the project with the new Republican administration’s state motto “This is a great example of how Maryland is ‘Open for Business,’” Lt. Gov. Boyd Rutherford said.

Others stressed how it can help lift up a hurting city in need of jobs and economic revival. Several made a point of emphasizing that Open Works is meant to be inclusive.

By keeping costs down and barriers to entry low, Open Works will be “not only do-it-yourself, but do-it-together,” said Samuel Hoi, president of the Maryland Institute College of Art.

“It will  be equitable and accessible to learning across the age and economic spectrum,” Hoi said.

Congressman Elijah Cummings, who said he refers to the building as “the house of dreams,” also urged that organizers to make sure that Open Works is “truly diverse.”

“We can no longer have a city,” he said, “where people are on the outside, clamoring to get in.” 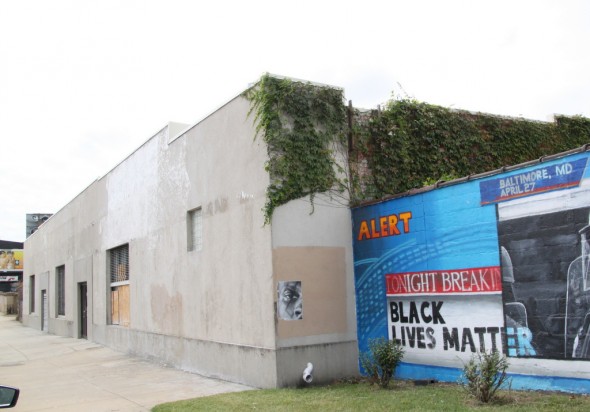