Baltimore City Council President Bernard C. “Jack” Young denied yesterday that his votes on the Board of Estimates are influenced in any way by campaign contributions – a possibility suggested in an Abell Foundation report released this week.

Young said he was never contacted by the author of the report and is troubled that anyone might accuse him of selling his votes at the weekly meetings of the city’s spending panel.

Young, who serves as president of the Board of Estimates, said “it’s hurtful” to him that a report from Abell would insinuate that his votes on the spending panel could be swayed by campaign contributions, when the report does not substantiate that allegation and does not give him a chance to respond.

He noted that Mayor Stephanie Rawlings-Blake controls three out of five votes on the panel, so it would be pointless for a contractor to try to bribe him anyway.

“I Don’t Control the Votes”

Even though he is technically the board’s president, Young said, he can always be outvoted by the mayor-controlled majority, which includes the director of Public Works and the city solicitor as well as the mayor.

Given that organizational structure, “I don’t control the votes on the Board of Estimates,” Young said. 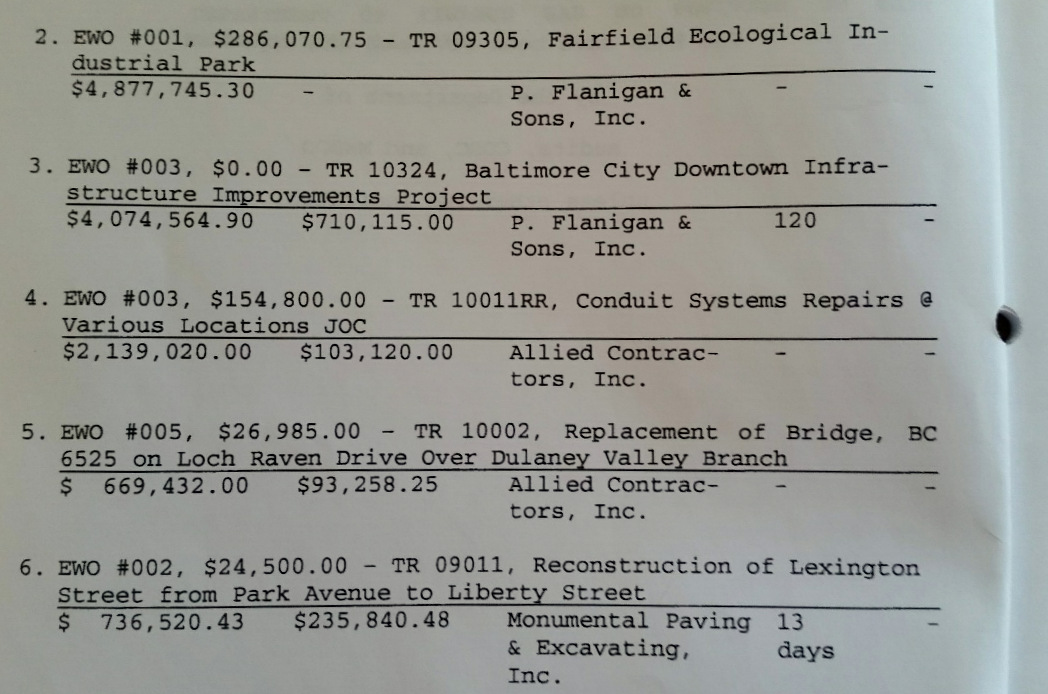 An example of EWOs passed by the board on July 13, 2011, the period studied by the Abell report. On the top line is the specific EWO under consideration and the amount. On line three of each entry is the original bid price and the total amount of EWOs previously awarded. The three contractors who won EWOs in this example were campaign contributors to both Jack Young and Stephanie Rawlings-Blake in their 2011 campaigns. (Board of Estimates Agenda, July 13, 2011)

City Comptroller Joan Pratt is the fifth member on the spending panel. Her vote is not controlled by the mayor because she, like Young, is an elected official and doesn’t report to the mayor.

Pratt’s office said the comptroller was reading the Abell report yesterday and would comment when she was done.

The report that troubled Young, titled The Opacity Problem, concluded that tracking the costs of city contracts is an exercise in futility.

A researcher hired by Abell tried to find out how many municipal contracts go over budget and by how much, but ended up concluding that it was impossible to say after looking at $212 million worth of infrastructure contracts awarded by the Board of Estimates in 2012.

Author Cristie F. Cole reported that determining whether 68 major city contracts experienced cost overruns and time extensions was “unanswerable” because of the difficulty in obtaining information about the status of city contracts.

The Abell report comes at a time when the Rawlings-Blake administration has failed to release any of the 13 agency audits required by the end of 2016.

A former CitiStat analyst at City Hall, Cole described the difficulty in tracking the costs of large infrastructure contracts in part because of the many “EWOs” (extra work orders) approved by the Board of Estimates after a contract is awarded.

She questioned whether campaign contributions might have influenced the actions of the three elected officials who voted to approve the EWOs. This is the section that Young found “hurtful.”

In her research, Cole found that four contractors received half of the 68 contracts under review. “All four of those companies,” Cole found, “were major donors to at least one” of the three elected officials.

Mayor Rawlings-Blake did not specifically address the findings of the Abell report at her press conference yesterday. She instead pointed out that she and her staff, as far as she knew, were not contacted during the preparation of the report.

Asked for her reaction to the report’s findings, the mayor said it “raises some important questions that we are looking into. My administration has been committed to transparency and to fixing problems. The Abell Foundation found that there are areas where we can [increase] transparency, and we’re going to work on that.”

The mayor routinely approves all of the EWOs that come before the board, which sometimes cumulatively increase the price of a city contract by 50% or more, The Brew has found.

Describing how he votes on such  contracts, Young said he attempts to stay on top of the EWOs by routinely questioning them and seeking additional information when necessary from agency heads, such as William Johnson, director of the Department of Transportation.

He said contractors sometimes have a legitimate need for additional funding because they encounter a problem after construction that could not have been anticipated during the bidding process. He said that happens especially when a project involves “aging infrastructure.”

Young noted that he is not a construction expert and at some point has to rely on the explanations of the professionals.

“I am not an engineer,” he said, but “I question all of the extra work orders. I think I’ve been pretty consistent in questioning all of that.”

Young overwhelmingly votes to approve EWOs, but occasionally votes against an EWO, which nevertheless is approved through the mayor’s majority vote on the board.