Baltimore’s top fraud and waste investigator, Robert H. Pearre Jr., was charged in September with second-degree assault in connection with a dispute with his wife at their home in Howard County.

There has been no disclosure of his arrest by the Rawlings-Blake administration and Pearre remains at his $138,000-a-year post in City Hall.

“The front office is fully aware,” Pearre told The Brew today, referring to his arrest.

“There have since been assurances,” Pearre continued, “that statements that were made that evening were subsequently retracted by my estranged spouse. In return, my attorney has been given some assurances by the state’s attorney’s office that the matter is going to be dropped.”

A message left by The Brew for his wife, Nancy L. Pearre, has not been returned.

At present, the charges remain and a trial is scheduled for December 9 in Howard County District Court. Pearre’s attorney, Mark J. Muffoletto, said a trial will bring out evidence that the defendant’s wife had retracted some of the statements she made to police.

Asked if Mayor Stephanie Rawlings-Blake was informed of the charges, Pearre referred a reporter to Muffoletto, who said he could not respond.

The mayor’s spokesman, Howard Libit, was also asked to comment today on the matter, but has not replied.

Appointed Inspector General in May 2013, Pearre, now 62, was arrested late on September 12 by Howard County police who responded to a “domestic assault in progress” complaint by Nancy Pearre.

Officers said they found the 61-year-old bleeding from her head and with lacerations in her left thumb. She told police that her husband “had pushed her when she was trying to take her vehicle.”

According to documents on file with the case, she said she fell back from the force of his push and hit her head on the car door. She said her husband then “shut her head in the car door” and “fled the scene” in a Ford Expedition.

An officer found the Ford Expedition parked on the street and observed a man, later identified as Pearre, “walking in the grass bending over at his waist as if he was trying to see something at the front of the house.” 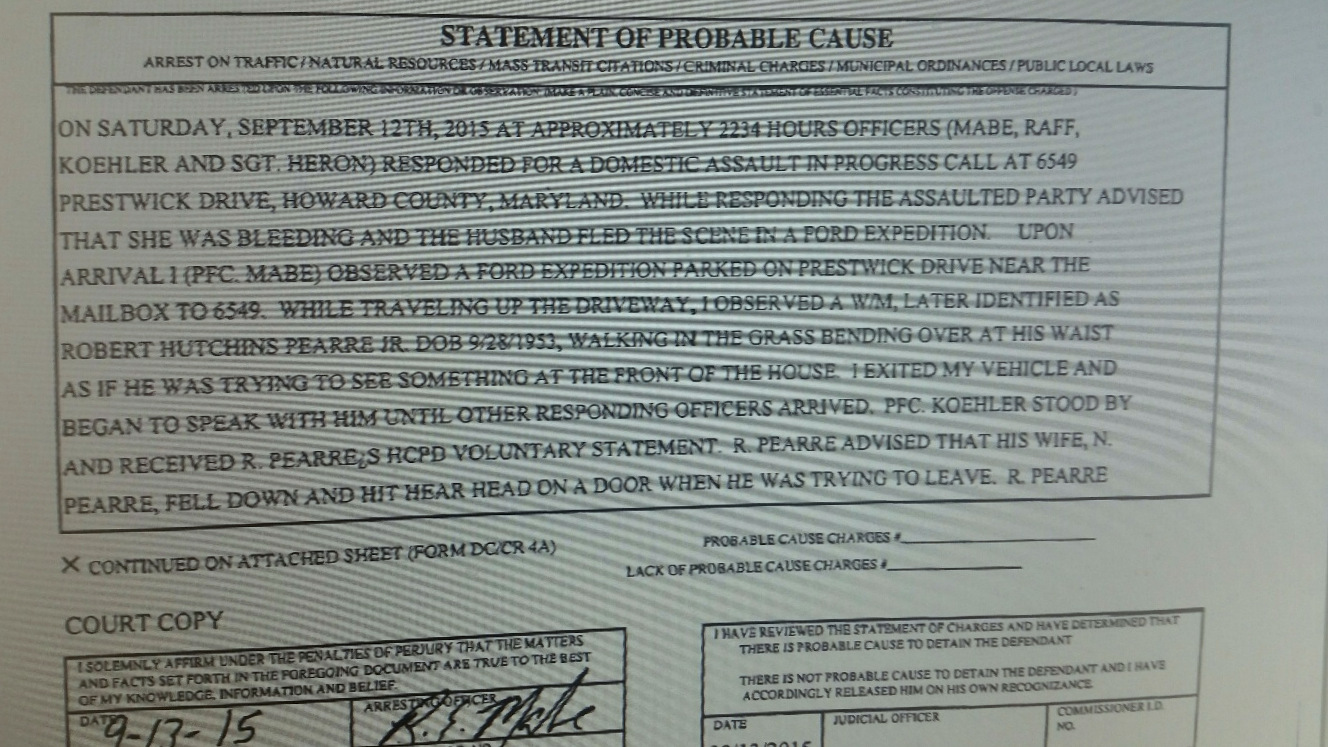 Pearre gave a voluntary statement to police, saying “his wife . . . fell down and hit her head on a door when he was trying to leave.” Her fall took place inside their residence, Pearre said.

He was arrested and transported to Howard County Central Booking where he was released on an unsecured bond of $15,000 the next morning.

Since replacing David N. McClintock as Baltimore Inspector General in 2013, Pearre has been credited with uncovering several schemes of fraud in keeping with his office’s mission of investigating possible misconduct by city employees.

They include documenting the phony timekeeping of Sandra E. Baker, former head of Baltimore’s Environmental Control Board, and, in conjunction with the FBI and U.S. Attorney’s Office, cash bribery by commercial trash haulers to city landfill employees.

While he maintains a townhouse in the city, as required for top city employees, Pearre and his wife own the three-acre property in Highland near Columbia.

Pearre was an FBI agent in the 1970s and 1980s. More recently, he served as chief investigator for the House Appropriations Committee in Washington, where he oversaw an investigation into the waste of government resources after Hurricane Katrina.