But at the appointed hour today, the headliners – Mayor Stephanie Rawlings-Blake and Housing Commissioner Paul T. Graziano – were nowhere to be seen.

There was just a yellow “Public Notice of Demolition” sign on the house’s front steps saying that contractor Pless Jones is scheduled to bring the block down this month. Tacked up on the plywood-covered doorway was a cheerier sign:

“Demolition on the way!” it said below the blue-and-white logo of Rawlings-Blake’s Vacants to Value program.

The event, it turned out, had been canceled.

Some of the people who had showed up not knowing about the cancellation, were pretty cheerful about the block being knocked down, even though they had no idea what would be put up in its place.

“I guess it’s just to take away this unsightly mess,” said Steven Johnson of the Garrison Hill Community Association.

But across the street, in a block of mostly abandoned houses also scheduled for demolition, homeowners were angry and fearful, saying they are being displaced.

“It hurts! I’m getting hoodwinked!” said Francois Abdool, 42, who said his family has owned 4817 Park Heights Avenue since the 1970s. 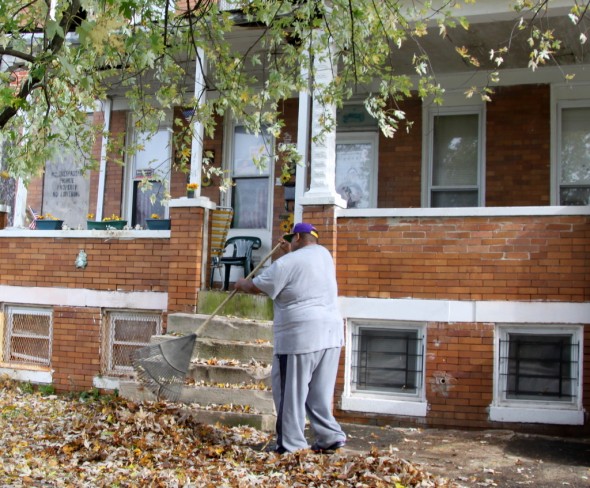 Francois Abdool outside the Park Heights Avenue house that the city wants to demolish. (Photo by Fern Shen)

Abdool was raking leaves in front of the house, which his family rents out, and paused to talk with a reporter. He and another man who lives on the block, Roderick Short, of 4811 Park Heights Avenue, both said they felt they are being forced to move by the city.

“I think at this point I’m going to have to go to a homeless shelter,” Small said.

Asked why today’s demolition event had been abruptly canceled, a spokeswoman for the Department of Housing and Community Development has not yet responded to calls and an email.

It may be that the housing commissioner and his boss decided the timing for the event was not propitious.

Graziano has been under fire amid a number of scandals and negative news stories, most sensationally the lawsuit and criminal investigation into allegations by women living in dilapidated public housing that Housing Authority maintenance workers demanded sexual favors in return for needed repairs.

Meanwhile, Rawlings-Blake is on record rejecting mounting calls for her to dismiss the longtime housing chief.

Adding to the awkwardness, a housing summit aimed at celebrating the fifth anniversary of her Vacants to Value program is scheduled for next week. With a national spotlight on the housing department and its chief, even small missteps like the wording of the announcement of today’s aborted event are getting harsh scrutiny. 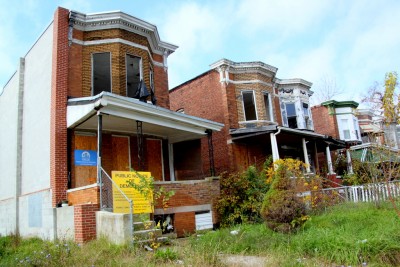 Rowhouses the city plans to tear down on Park Heights Avenue. (Photo by Fern Shen)

“With a shrinking population and swaths of crumbling vacant houses, sometimes a fresh start is the best option for all involved!” said the Facebook promo.

That peppy language irritated Eli Pousson, director of preservation and outreach for Baltimore Heritage, and he said so on the Baltimore Housing Facebook page.

“Demolition may be necessary,” Pousson tartly wrote, “but I don’t believe it should be celebrated.”

For Abdool and Short, the prospect of heavy machinery leveling their block seemed like the last chapter of a sad story unfolding over many years.

“I grew up here. An older couple lived there. Another family I knew was there. Kids I played with were over there,” he said, pointing to boarded-up properties, several with trash blowing around the lawn.

Noting that he, an uncle and other relatives share ownership of the house, the city’s offer of $27,000 won’t go far for him, he said, adding that he’d like to live in the property.

He termed the offer as “outrageous,” saying the city should be paying something more like $40,000 for the house.

“We did a lot of renovation here,” he said, noting that the property has two full bathrooms, a new furnace and water heater, and other improvements.

“I’m Going to be one of those People”

As for Short, who walks with a cane and lives with his elderly mother, he says he can’t live in the housing the city has found for his mother.

Even though he received a Section 8 subsidized housing certificate last February, he has been told that there are many other applicants ahead of him. Meanwhile, the city has told him he must vacate his house next month.

“I’m going to be homeless,” the 48-year-old said, getting up from the step where he was keeping Abdool company.

“I’m going to be one of those people in the shelter on the Fallsway. I don’t know what else to do. Can you help me?” 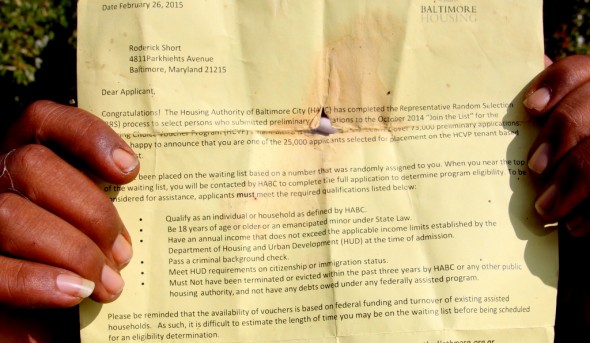 Roderick Short’s letter informing him he is on the list to receive Section 8 subsidized housing. (Photo by Fern Shen)

Abdool said he wonders why there is no way for residents like him and Short to be permitted to return after their property is knocked down.

“It seems only right,” he said looking back at his house. “If I can’t, I’m just, I don’t know, going to have to come here when they tear it down and get a brick for a souvenir.”