Responding to a public outcry, Baltimore’s Commission for Historical and Architectural Preservation took action today to block demolition of a historically significant rowhouse in Marble Hill that civil rights activists have been fighting to save.

The sign states that the commission will hold a public hearing on January 12 to consider adding the structure to its “potential landmark list: exterior,” a new category of structures that are temporarily protected from demolition.

The act of posting the building for a public hearing triggers a provision in the City Code that prohibits a building owner for six months from altering its exterior, including tearing it down, without obtaining approval from the preservation commission.

First-time Use of New Law

This is the first time CHAP has moved to put a building on its potential landmark list, which was officially created last month as part of a comprehensive revision of the panel’s enabling ordinance that gives the panel authority to protect city landmarks.

Under the revised language in Article 6 of the City Code, the “potential landmark” list replaces a “special list” that previously was used to protect historically significant buildings that were threatened with demolition.

CHAP posted the building for a hearing one week after two dozen preservationists and civil rights activists staged a demonstration in the 1200 block of Druid Hill Avenue. 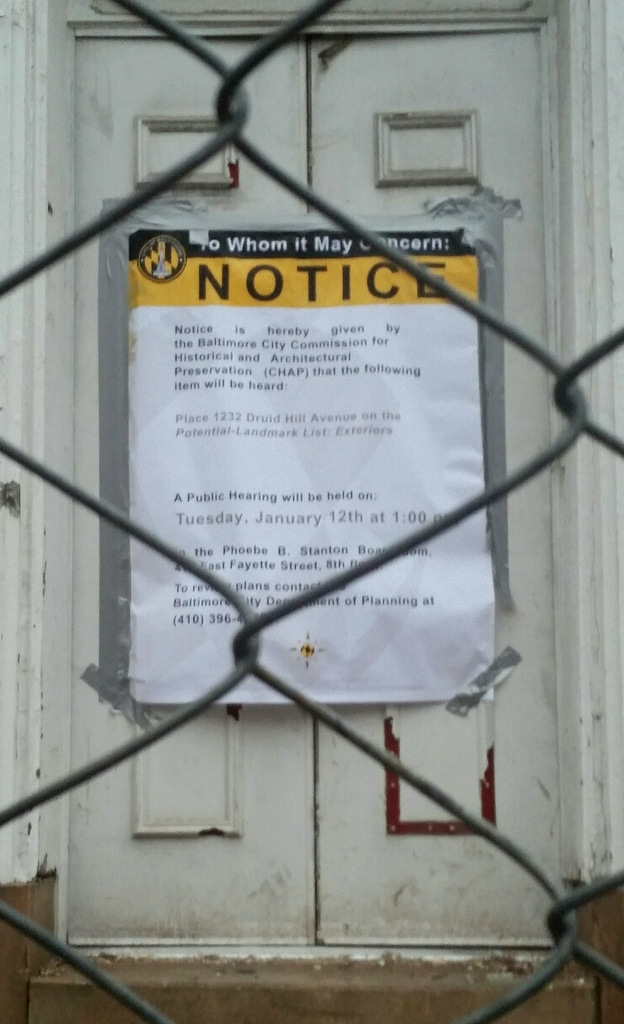 The CHAP notice that temporarily stopped the demolition of a historic Marble Hill house today. (Photo by Mark Reutter)

They mounted the demonstration to protest the demolition by Bethel AME Church of a rowhouse at 1234 Druid Hill Avenue, the former “Freedom House” and a meeting place of the Baltimore chapter of the NAACP.

At the demonstration, the preservationists said they feared the church was planning to raze the house at 1232 Druid Hill Avenue, which it also owns.

Rev. Frank M. Reid III, the pastor of Bethel AME Church, could not be reached today.

He has not responded to previous requests, from preservationists and the media, for information about the church’s plans for buildings it owns in Marble Hill.

Holcomb said this evening that he has been unable to talk to Reid.

He said that he met with CHAP chairman Tom Liebel and commission member Larry Gibson, and all three decided to use the “potential landmark” designation to protect 1232 Druid Hill Avenue.

“Hopefully, that will allow time for CHAP and advocates for preservation to get an ordinance introduced” for permanent landmark designation of the building, Holcomb said.

Under the law, no exterior changes can occur to a property on the potential landmark list without CHAP’s approval, Holcomb explained. “It inserts CHAP into the demolition approval process because it means [the owners] would have to come to CHAP and present their case.”
________________________________
PRIOR BREW COVERAGE:

• Reduced to rubble: Why a historically significant house could be razed so easily in West Baltimore (11/13/15)

“We think we did the right thing,” Holcomb continued. “It is a very significant historic structure, and the reason it took us so long is we haven’t used the potential landmark listing before and there were a lot of questions and nuances we wanted to think through before we moved ahead. We see how much the community cares about it.”

The CHAP hearing will be held on January 12 on the eighth floor of the Benton building, 417 E. Fayette Street.

Besides being a meeting place for NAACP, the demolished building at 1234 Druid Hill Avenue was the home of Baltimore’s first African-American City Council member, Harry Cummings.

Despite their historical significance, neither 1232 nor 1234 Druid Hill Avenue fall within the Marble Hill historic district, where any exterior changes to buildings must be approved by CHAP.

Holcomb said one reason why CHAP moved to protect 1232 – and not 1234 – is that the Baltimore Housing Department had already issued a demolition permit for 1234, and demolition was underway when his office learned about it.

In the case of 1232, he said, the housing department had tentatively approved a demolition permit, but the church had not paid for it and had not picked it up.

Holcomb said it is his understanding that a demolition permit technically isn’t issued unless it is paid for and picked up. “If the demolition permit for 1232 had been issued,” he said, “we wouldn’t have done what we did.”