A problem leftover from the O’Malley administration is pending before the Maryland Department of the Environment [MDE] and now a coalition of environmental and community groups is, in effect, waving it in front of Gov. Larry Hogan’s face:

They want him to kill the proposed Fairfield trash incinerator, a south Baltimore facility that would burn everything from construction debris to chopped-up car parts. Work onsite stopped nearly two years ago, according to MDE inspection reports making the project out of compliance with its permit.

“Asthma is a big deal in our community right now. To add an incinerator into the mix is just going make it a lot worse,” said Domnic Mapilli, who grew up in the heavily industrial area,  where chemical companies, a rendering plant and other facilities have impacted the environment.

Recently, a delegation of opponents went to MDE headquarters and delivered a letter, a petition with more than 1,000 signatures and video testimonials from people like Mapili, of Benjamin Franklin High School, which is less than a mile from the proposed incinerator site.

“I have asthma. Many people I know have asthma. . . All of us are breathing the air,” Mapili said in the video, concluding with a plea to Secretary of the Environment Benjamin H. Grumbles.

“All you have to do is just help us – help the community.”

“Not Even Baltimore’s Garbage”

The coalition –  which includes the Environmental Integrity Project, the Baltimore Harbor Waterkeeper, United Workers and the student-led Free Your Voice group  – represents the groups who have been fighting for years against the project being proposed by New York-based Energy Answers International Inc.

With no work taking place at the site for more than 22 months, the opponents say, Energy Answers Baltimore is out of compliance with their 2010 Certificate of Public Convenience and Necessity, which specifies that it expires “if construction is substantially discontinued for a period of 18 months or more.”

MDE inspection records release by Gregory Sawtell, a United Workers organizer, show there has been no significant construction activity there for at least 22 months.

Energy Answers has said they will begin construction next year and have been working to securing energy contracts. A spokesperson for the Albany-based company has not responded to the Brew’s request for a statement.

Meanwhile, a portion of the company’s anticipated customer base went away earlier this year when the city terminated its power purchase agreement with Energy Answers. City officials also said at a recent Planning Commission meeting that Baltimore’s 10 year Solid Waste Management Plan does not include sending city trash to a future Energy Answers plant in Fairfield. 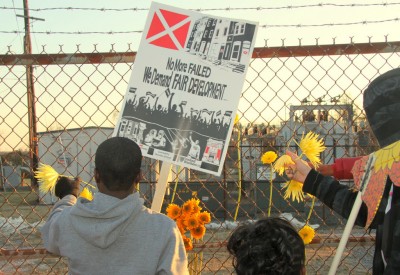 Free Your Voice and allied groups have been protesting the Fairfield incinerator for years. (Photo by Fern Shen)

“Residents are going to be asked to breathe air with an additional 240 pounds of mercury a year and 1,000 pounds of lead – and it isn’t even Baltimore’s garbage,” said Neil Seldman, of the Instittute for Local Self-Reliance, which has been working with opponents.

MDE spokesman Jay Apperson promised to look into our query and reply on behalf of the agency.

Sawtell said the groups are pushing MDE  in part to advance their efforts to bring alternative development the site, at 1701 East Patapsco Avenue in Curtis Bay.

“The project being in limbo is holding the site hostage,” he said. “We have been having conversations with the Baltimore Development Corporation and the Planning Department to find real sustainable alternatives for even just a portion of this site.”

Energy Answers leases land at the 97-acre site from the owners, FMC Corp.

Working with Seldman, the community has come up with some specific ideas.

We have identified a number of organizations that are interested in coming there that will add value to recycled materials and create employment for the community,” said Seldman, who directs  the Institute’s “Waste to Wealth” initiative. Here’s what he’s come up with so far:

• An eWorks plant that would recycle used electronics – 30 jobs.

• A composting operation (offsite but in the community) – 20 jobs.

Also under discussion is a solar energy array project residents have identified on their own, Seldman said.

A Deadline from Opponents

Sawtel said opponents’ recent visit to MDE headquarters was intended to announce their plans to organize a major demonstration there on Dec. 15 if the agency does not respond to their requests.

“We sent them a letter about this in August and have gotten no response. They’ve really had enough time to take action,” he said.

“We’re just hoping that they take a look at this and see the sense in our argument,” he said. “The community is looking for a productive use for that land that doesn’t hurt their health.”