The air was soft and springy but the mood was tense in West Baltimore yesterday, with a verdict looming in the trial of one of the six Baltimore police officers being held criminally responsible for Freddie Gray’s in-custody death.

On the streets of Sandtown where the 25-year-old lived and at Penn-North where he was arrested, people said they fear rioting could break out if Officer William G. Porter is cleared or is convicted of a reduced charge this week.

“If the jury don’t go the way they’re supposed to, the way of the people, we might have the criminal element take advantage again – it might erupt,” said Corey Dyer, 44, who lives on Fulton Avenue, near the epicenter of the rioting that broke out on April 27, the day of Gray’s funeral.

“The police might be more on top of it this time. Let’s hope so,” he added.

“My biggest fear is this city is going to be messed up, it’s going to really be destroyed this time. And it’s a sad thing, because we don’t have much as it is,” said Latonya Jackson, 39, who was sitting on her front steps on North Gilmor Street.

Whether or not looting and burning flare again, Jackson and nearly every other person interviewed yesterday expressed a greater fear – that their community will remain impoverished and that police will never be brought to justice for exceeding their authority with poor black residents. 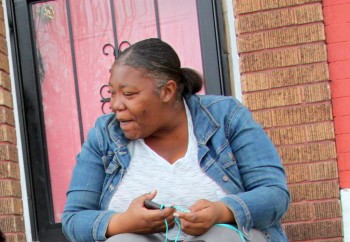 Latonya Jackson is worried what will happen after the Officer Porter verdict is announced. (Photo by Fern Shen)

“I don’t think nothing’s going to be done at the end of all this,” Jackson said, predicting that the cases against the officers will fizzle and the public’s attention will drift away.

“All these abandoned houses, all these schools [that are] so run-down or they’re closing them,” she said. “They could have changed these things already if they cared.”

Injury Before the Van Ride?

After eight days of testimony, the defense rested their case Friday.

Closing arguments are scheduled to begin today. Police Commissioner Kevin Davis has canceled leave for all officers, and he and Mayor Stephanie Rawlings-Blake have asked residents to react to the verdict “respectfully.”

Although people in Gray’s neighborhood have been generally following the trial, their view of it seems in some ways disconnected from courtroom drama as it has been reported by media from around the world.

The prosecution and defense have been wrangling over a narrowly framed premise – that Gray died as a result of injuries suffered during a rough ride in a police van, and that six officers involved in his transport either caused his injuries or failed to get him medical attention that could have saved his life. 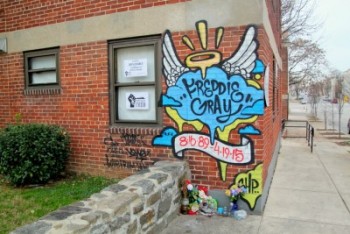 Memorial in the place where Freddie Gray was arrested on Presbury Street last April. (Photo by Fern Shen)

Gray’s neck was broken and his spinal cord nearly severed.

Porter faces charges of manslaughter, second-degree assault, reckless endangerment and misconduct in office for allegedly failing to put Gray in a seat-belt and for failing to call for a medic after Gray told him he couldn’t breathe and needed one.

But in West Baltimore, the widespread belief is that the police officers who arrested Gray caused his injury. Some theorize that an unsecured ride in a lurching van could have worsened initial injuries caused by a violent arrest.

“You saw that film. They beat that boy. You saw that police [officer] with his knee in his back. It takes a lot to snap somebody’s body like that,” said a woman who was watching a pickup basketball game  at Gilmor Elementary School.

The woman was referring to the viral cellphone video shot on April 12 by Kevin Moore, a friend Gray’s. It shows the 25-year-old Gray on his stomach on the ground, howling, as the uniformed policemen hold him down, his legs bent upwards behind him.

“Picture the heels of your feet almost in the middle of your back, but the wrong way. And it just looked like a pretzel almost. And the officer had his knee like buried right into his neck,” Moore told Democracy Now! host Amy Goodman.

“You could hear him screaming, man,” he said to Goodman. (Moore gave similar accounts to other media outlets.) “You could hear the pain in his voice. And on his face, you could see it.”

In this short video, Gray’s head is lolling to one side and his legs are dragging as two officers haul him to the van. Gray supported himself briefly before being placed inside the van.

The report filed in the Gray case by assistant state medical examiner Carol Allan, however, concluded that Gray’s injuries were caused between the second and fourth stops the police van made on its circuitous 40-minute journey that day.

Allan said she concluded the severe spinal injury Gray suffered happened when Gray got himself in a standing position inside the van and and fell.

That’s the premise of the charges State’s Attorney Marilyn Mosby filed against Porter and the other officers. 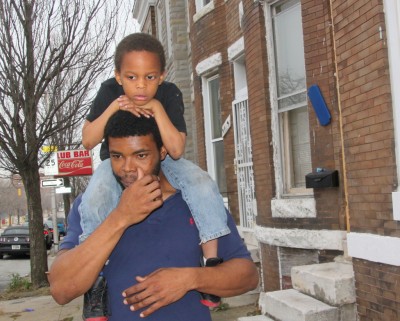 But for residents of Sandtown, vivid images of from the video remain chilling and conclusive.

“It’s so sad. They were dragging him. His legs were already broke, they weren’t working,” said Ty Vance, 20, Jackson’s niece.

“He was already screaming and hollering,” said Darnell Lambirth, deacon-elect at Riverbrook Road Impact Church, who was assisting in a soup-and-sandwich giveaway on Fulton Avenue.

Lambirth said he believes what he was told by a physical therapist who watched the video: “Gray was already paralyzed when they picked him up off the ground.”

“I Haven’t Given Up”

Not everyone yesterday was pessimistic about the area where the civil unrest occurred in April.

Dyer said he bought a house on Fulton, two blocks from the North Avenue intersection a couple of years ago because “I heard good things about Baltimore.”

Dyer said he’s originally from Trinidad and lived most recently in New York and invested in the area because it is affordable and has potential, despite the blight.

The rioting “was scary” he said, noting that the CVS drug store on North Avenue was the only place where a neighbor on dialysis could get her medications. The CVS, burned in the rioting, has not been rebuilt, he pointedly noted.

“But I haven’t given up on this place,” said Dyer, who leaves his house at 4:30 a.m. every morning to commute to his maintenance job in Washington. 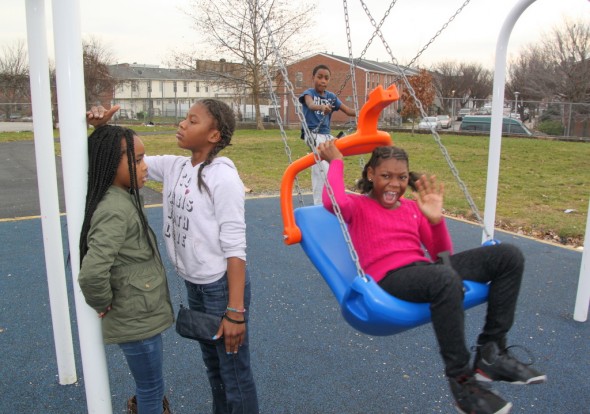 A dilapidated playground at Gilmor Elementary School was replaced with this new equipment after the April unrest. (Photo by Fern Shen)

Dyer said he sweeps the street, paints the boards covering the window next to his “to make it look like someone lives there” and is hoping to open a laundromat in a dilapidated corner building.

He wants to talk to city officials to get some help with vacants, trash and absentee landlords: “We need some group action.”

But poor relations between the police and the community remain a barrier to making the neighborhood livable, several residents said.

“Some police officers can be very, very cruddy in their behavior,” said Omar Adams, who was walking with Khumari, 5, on his shoulders.

“I don’t know how come they overreact, even with people who aren’t doing anything, and do dumb stuff. Make things worse,” he said.

Lambirth, a volunteer firefighter in Baltimore County, said he was disturbed by what Porter allegedly did – fail to get medical help for Gray.

“Being a firefighter myself, I know you  gotta take it seriously when someone says they need help,” he said.

Lambirth said he knows some defense witnesses have been saying that police officers in Baltimore often encounter people faking illness and rarely put seat-belts on people they are transporting in vans. But he says that’s “no excuse.”

Lambirth winces when he talks about the Porter case (“It hurts to see an officer get in trouble.”), but he thinks prosecutors are right to pursue the case, even if responsibility for Gray’s death is diffuse.

“Somebody should have to answer and pay for what happened,” he said. “That’s the only way things are going to change.” 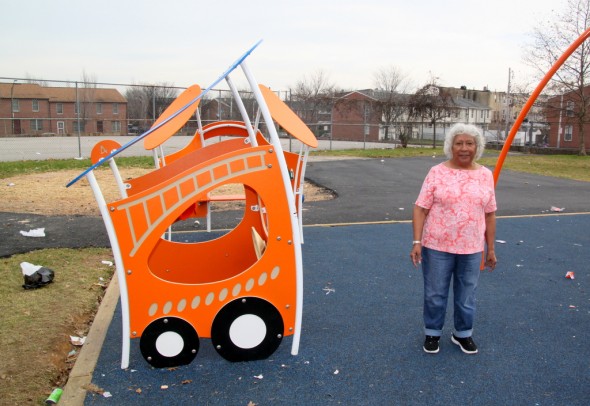 Civil rights activist Helena Hicks stands at the new playground at Gilmor Elementary that she was instrumental in pushing for. (Photo by Fern Shen)