Turning St. Paul and Calvert into two-way streets would cost about $18 million and slow vehicles to a crawl at rush hour without dedicated turn lanes and other improvements, a city-hired consultant reports.

Half of the price would come from installing new street signals along the north-south thoroughfares that parallel one another for 35 blocks between downtown and Charles Village.

Most of the traffic delays would come from 14 intersections where cars are projected to be stopped from 55 to more than 80 seconds under the new configuration.

Amid the many challenges described by the study, released online by the city Department of Transportation is this silver lining:

By starting bidirectional operations at Mt. Royal Avenue instead of Fayette Street downtown, the cost of conversion would drop significantly and traffic times improve sharply.

What’s more, by making the northern terminus at 33rd Street instead of University Parkway, two-way traffic would flow better in Charles Village and around Union Memorial Hospital, the report says.

But St. Paul and Calvert would no longer be the signal-synchronized speedways developed by legendary traffic commissioner Henry Barnes in the 1950s to whisk suburbanites downtown before the advent of I-83. 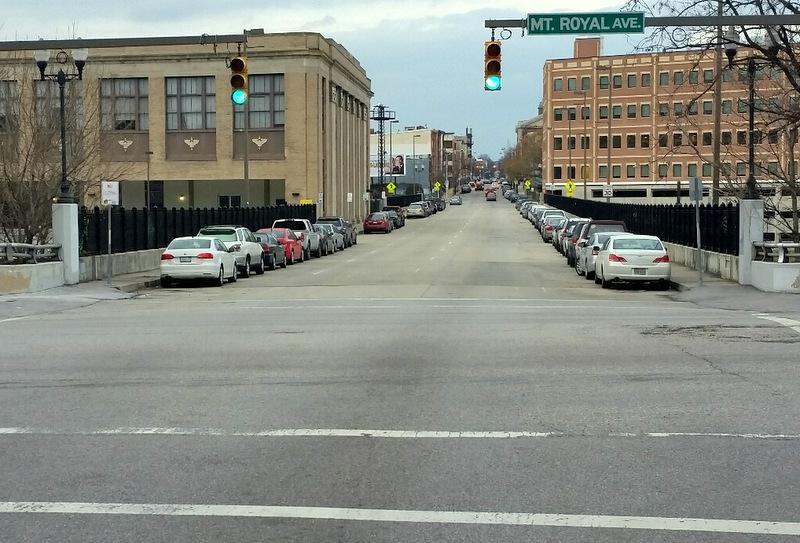 It makes sense to start two-way operations of Calvert Street at Mount Royal Avenue rather than downtown, the study says. (Photo by Mark Reutter)

Eliminating one-way streets to make inner-city neighborhoods more attractive has been underway in many U.S. cities.

In Louisville, Ky., the two-waying of Brook and First streets has led to a 23% reduction in auto theft and robberies, 39% jump in property values and “adaptive reuse of abandoned properties,” according to the report.

Switching Detroit’s Second Avenue to dual traffic has increased bike traffic and visits by out-of-towners. The changeover has been “very favorably” accepted by the public, according to Midtown Detroit, Inc.

A dual-traffic Vine Street in Cincinnati has decreased auto volume by 28% and average car speeds from 18 mph to 12 mph. 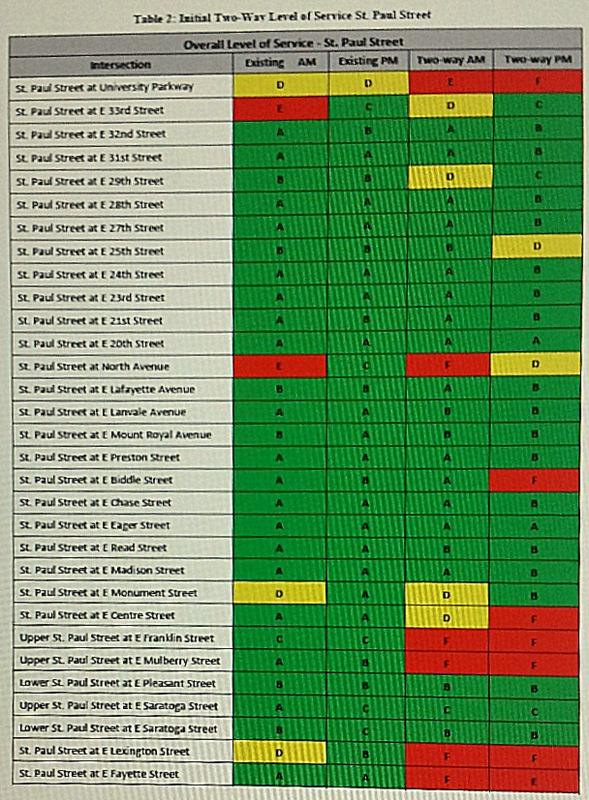 Consultant Sabra, Wang & Associates found that southbound St. Paul currently funnels commuters between University and Fayette in 16-19 minutes, while Calvert draws them up in the evening in 11-13 minutes.

If changed to a single lane northbound and a single lane southbound (and keeping curbside parking intact), “modeled peak-hour travel times increase to over 60 minutes for both directions on St. Paul Street and Calvert Street,” the consultant reports.

The disclosure of such travel times at a recent public hearing caused a mini-uproar.

However, by constructing dedicated left-turn lanes and restricting on-street parking at some intersections, the city’s plan would leave traffic on both streets only be minimally impacted by two-waying, the report says.

WHAT DO RESIDENTS THINK?

Out of the 5,800 people who live or work on the St. Paul and Calvert corridors, 1,446 responded to the survey conducted by Sabra, Wang.

• 55% said they would support conversion if it improved public safety, created a more pedestrian-friendly environment, and improved accessibility to their residence or business.

• 66% said they would not support conversion if it increased vehicle travel times, negatively affected bus service or reduced on-street parking.

Most of the obstacles to two-waying arise at the southern ends of St. Paul and Calvert.

The report projects the worst snarl would come from turning St. Paul Place into dual traffic, causing tie-ups where the upper-level road rejoins the main leg of St. Paul at Centre and Lexington streets.

(A solution not explored by the consultants would be to keep St. Paul Place one way.) 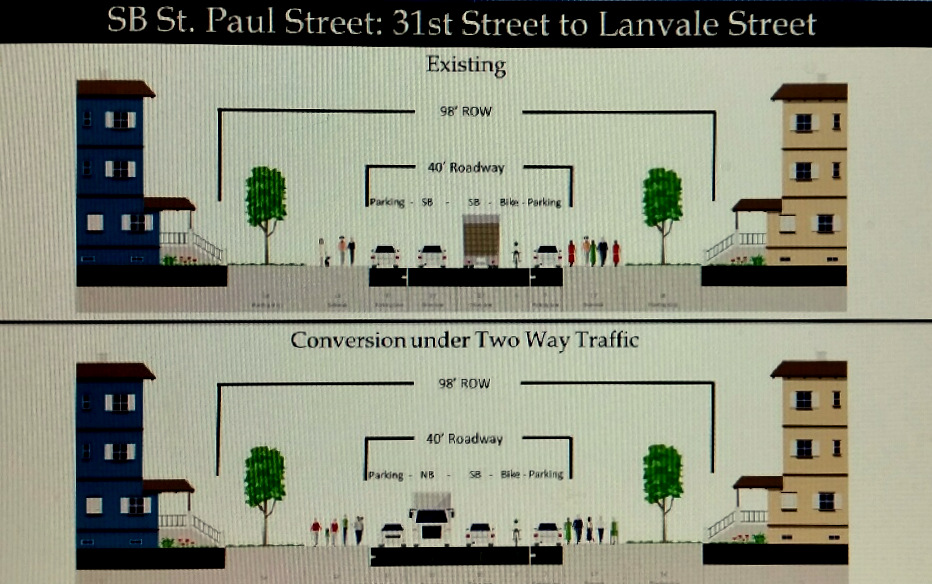 A two-way Calvert Street would get backed up around the courthouses at Fayette Street, North Avenue, 25th Street, and above 33rd Street where it serves as an entry point for Union Memorial Hospital.

Such delays could be reduced by prohibiting left-hand turns at rush hour and/or restricting parking near intersections to allow for “pocket” turn lanes, the report notes.

Another option is to divert traffic on nearby roadways, such as Charles and Maryland/Cathedral. Here’s what the consultants report in traffic engineering lingo:

“Testing a modest diversion percentage of 10% and 20% of existing traffic volumes away from St. Paul Street and Calvert Street (assumed to be distributed evenly across adjacent parallel streets) was performed at critical intersections to see if the level of service improved.

“These modest diversion percentages did not improve the LOS [Level of Service] and therefore it would be expected that a diversion percentage of greater than 25% (at least 250 vehicles per lane per direction per rush hour) would be necessary to improve intersection LOS to acceptable levels.” 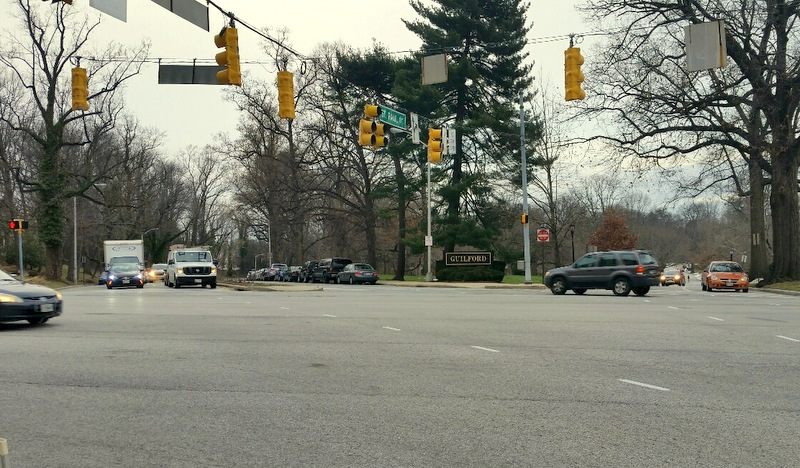 The study recommends against terminating two-way traffic on St. Paul at University Parkway (above). A service road currently runs northbound, but does not provide full access to University. (Photo by Mark Reutter)

Implementing two-way traffic would increase transit times, but there are several options available to offset the loss, according to Sabra, Wang.

They include consolidation of bus stops to reduce the number of times buses need to stop and relocating stops from the near side of an intersection to the far side to reduce conflicts when buses merge in and out of traffic.

One-way to two-way conversion would also increase the number of conflict points between cars and pedestrians.

“Improvements to pedestrian crossings such as bump-outs, pavement markings and signal phasing/timing are some options to address the additional conflict,” the report says, “but they may reduce traffic capacity.”