How do you make a light-themed festival of art, music and ideas at the tourist waterfront of a city that just went through a dark year – one that featured massive protests, rioting and National Guard troops patrolling that same waterfront?

That’s the central challenge faced by organizers of Light City Baltimore, which is kicking off tomorrow at the Inner Harbor and continuing for a week (March 28 – April 3).

Time will tell, but judging by the lineup, it’s going to be a strange blend of campy colorful pieces, like a 21-foot-high, lit-up peacock, and other installations that are sober, provocative and directly reference the “Uprising” following the death of Freddie Gray.

A good example of the latter will be diamond-shaped sculptures by artists Mina Cheon and Gabriel Kroiz, being set up on Pier 5.

“These 15 larger-than-life LED sculptures create illuminated landscapes of fabulous proportions and signify two Baltimores, one prosperous and hopeful and the other in a state of permanent emergency,” Cheon writes in an artist’s statement.

“The light will change from white to blue at 10 p.m., recalling last April’s city-wide curfew, and respond to the most current and largest city light installation, the blue light police surveillance.”

Speaking of the large walk-in diamonds, the artists note that “as one of the most valued and fantasized consumer object, [diamonds] can be viewed as the epitome of capitalism, but the hollowness of this structure contrasts with the permanence of diamonds and their cultural value, to highlight both aspects – both the spectacularity and the vapidity of the object.” 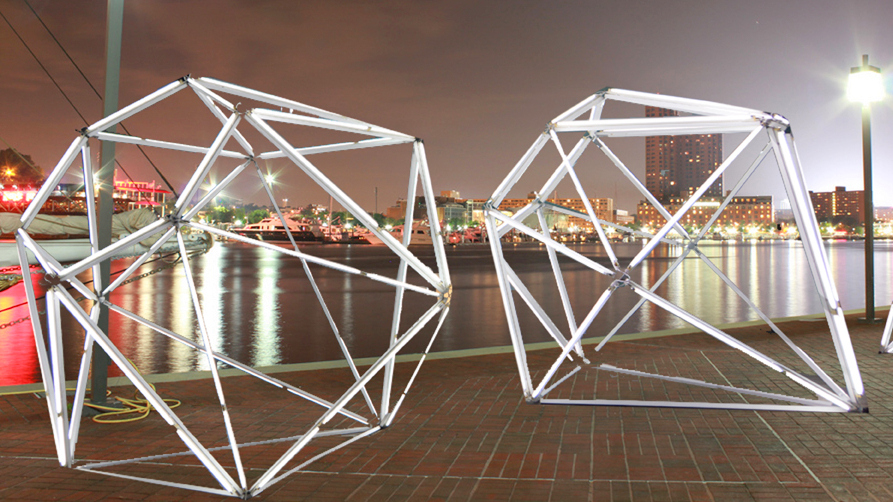 The artists’ rendering of part of the “Diamonds Light Baltimore” installation. (Mina Cheon and Gabriel Kroiz)

Critic Cara Ober has a thoughtful and detailed post discussing this piece and others. She also reflects on the controversies leading up to the $5 million event that is mostly corporate-funded. (The lit-up diamond installation, for instance, appears courtesy of Exelon/BGE and is part of the “BGE Light Art Walk.”)

Will the installations end up being viewed as commercial, crowd-pleasing “art-lite”?

Ober, writing in BmoreArt, appears to be won over by the topics that the artists tackle, including “social justice, economic inequality, global warming and Baltimore’s troubled past.”

The national committee of jurors assembled by the Baltimore Office of Promotion and the Arts, she concludes, “have strong ideas about the function and purpose of art.”

Yesterday near West Shore Park, workers were setting up “Lumen,” an installation and performance space where artists and attendees will assemble “a large-scale fluorescent community drawing.”

On Pratt Street, tourists were carrying shopping bags and licking ice cream cones, but come Monday they will have something arresting to consider: the slave history that took place on that very street.

Artist Paul Rucker has fashioned illuminated sculptures that will be attached to light posts mark the spots where slave merchants had their offices, where slave ships were unloaded and where slave auctions were held.

Another challenging piece is “Pipelines,” by the local artists of Luminous Intervention. It will feature images of Freddie Gray, Tyrone West, Michael Brown and Sandra Bland, people whose deaths in encounters with police sparked the Black Lives Matter movement.

The images, being projected onto the various surfaces of the McKeldin Fountain, will also reference the city’s troubled education system, under-served youth recreation programs, and the so-called ” school-to-prison pipeline.”

In all, 28 illuminated art installations are going to be on display along a 1½-mile stretch of Light and Pratt streets, from the Maryland Science Center to Harbor East.

Some events are planned away from the waterfront. There will be activities in Little Italy, Clifton Park, Mondawmin Mall and Hampden, for instance. 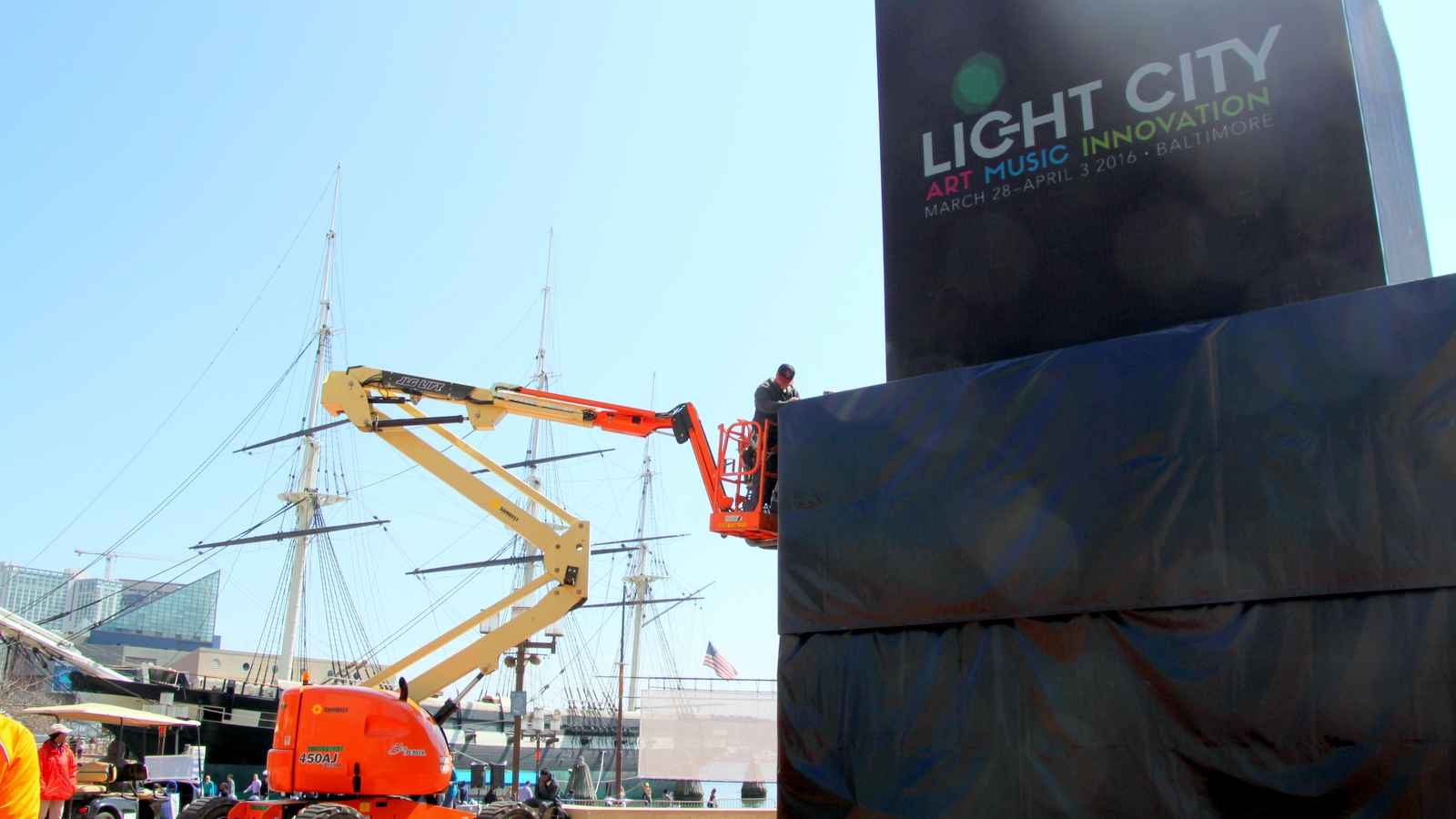 Set-up crews were at work yesterday along the Inner Harbor promenade. (Fern Shen)

And the festival has been conceived as an idea-fest as well. Conferences are planned on sustainability, health, social innovation and more.

Attending the conferences will be pricey ($225 and up), but the rest of the festival is free and open to the public.

Together with art and civic identity, Light City is all about boosting tourism.

Part of its premise is to attract visitors who shunned the city after the events of last April, causing steep declines in attendance at attractions like the National Aquarium and lowered year-end hotel booking numbers by 9%.

Organizers say they are looking for 350,000 people to attend the Light City event. In addition to corporate sponsors, the city’s tourist arm, Visit Baltimore, is kicking in $225,000 as well as in-kind logistical and marketing assistance.

Near the Maryland Science Center yesterday, at least one workman was optimistic about the promise of a tourism bump.

“We’re bringing in the money!” he proclaimed with a smile, as he and a colleague set up a mobile ATM station. 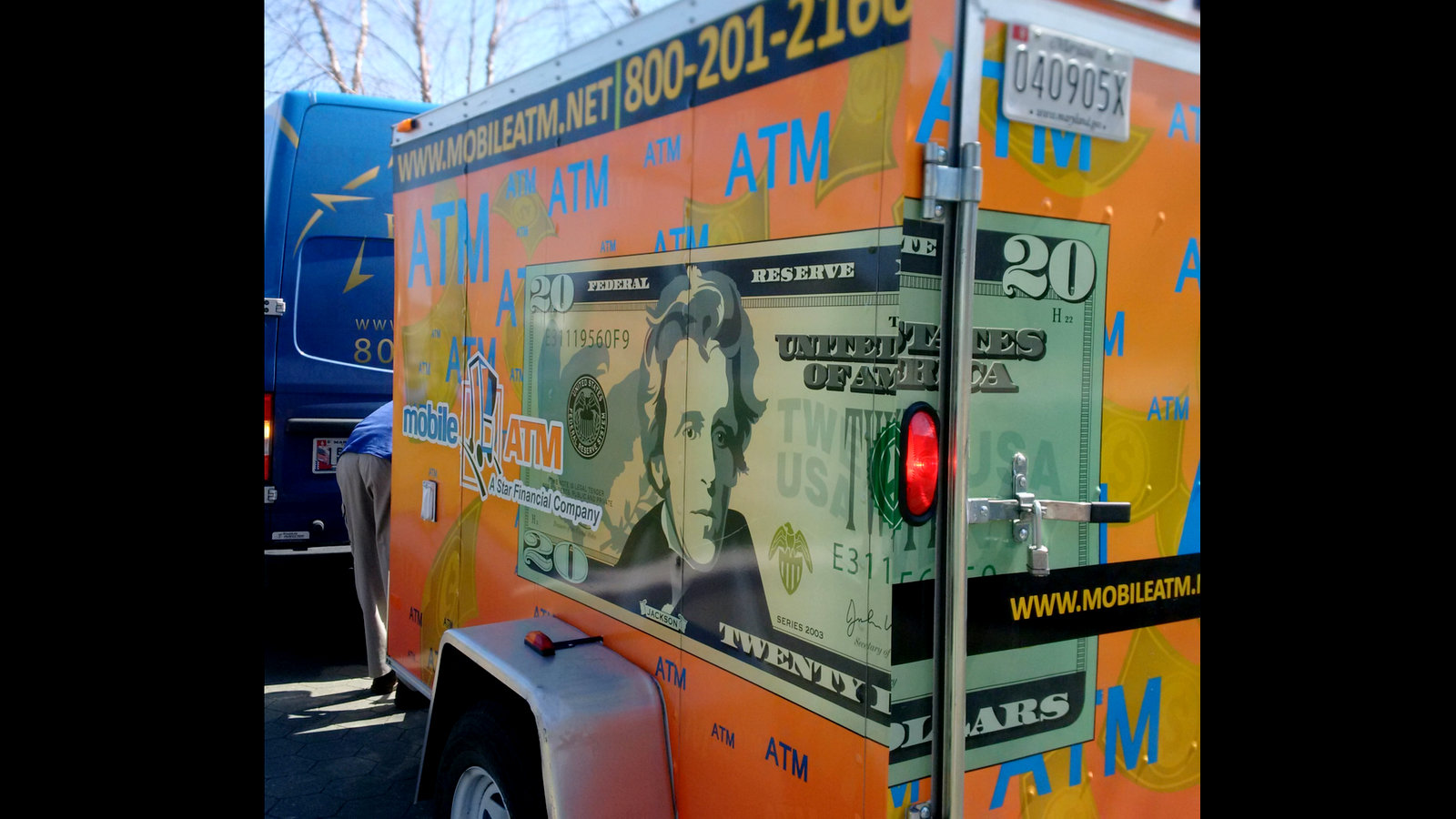