Baltimore Development Corp. chairman Arnold Williams today summarized the advisory opinion of the Maryland Open Meetings Compliance Board that the agency had violated state law by closing its Port Covington meetings to reporters in March.

“We are officially acknowledging the opinion of the Maryland Open Meetings Compliance Board, which concluded that BDC’s Project Review and Oversight Committee violated the Open Meetings Act by discussing in a closed session a number of topics that did not fall within the exception the Committee cited as authority for the closing, and that the committee failed to disclose its reasons for its decision to exclude the public from discussion.”

“I must personally say,” Williams continued, “that I stepped in to chair that Project Review and Oversight Committee, and there was no intention to violate the Meetings Act” during the Port Covington discussions that ended with the board’s unanimous approval of $535 million in tax increment (TIF) funds to Sagamore Development – a figure that has since risen to a $660 million bond issuance pending before the City Council.

“In getting this opinion, we will make certain that we do as much as we can to be as transparent as we can,” Williams concluded.

Other than acknowledging a violation of the Meetings Act and requiring board members to sign a form that they were aware of the Compliance Board’s opinion, the BDC faces no repercussions for its actions.

Its recommendation for the Port Covington TIF stands (a “no” vote would have stopped the process in its tracks). The minutes of the  closed meetings have been placed on the BDC’s website. No tape recordings of the closed sessions were made by the agency.

In each case, the board gave a different reason for closing the meeting from the “marketing public securities” cited in the Port Covington meeting closures that the Compliance Board said never took place in the closed sessions.

Deborah Hunt Devan, chairman of the Project Review Committee, said 305 5(b)(14) of the Open Meetings Act was applicable for today’s closures.

According to the manual provided by the Maryland Attorney General’s Office to guide public bodies on the Open Meetings Act, this provision allows a public body to close a meeting to discuss “a matter directly related to a negotiating strategy or the content of a bid or proposal” – but only “if public discussion or disclosure would adversely impact the ability of the public body to participate in the competitive bidding or proposal process.”

The manual goes on to say that the purpose of the 5(b)(14) exception is to prevent information from becoming public that “would give an advantage to the offerors who have not yet presented their proposals and would thereby compromise the [bidding] process.”

In both cases before the BDC today, only one developer was seeking to buy properties from the city, not a group of bidders. Williams and Devan had the following to say before the vote was taken to close the meeting:

Williams: “Just so it’s clear about the discussion, it is proprietary financial information. It is not shared.”

Devan: “I just wanted a confirmation that, as far as you’re concerned, the only thing left to discuss is proprietary financial information. And with that stipulation, I will suggest that we close the meeting for the sole purpose of that discussion.” 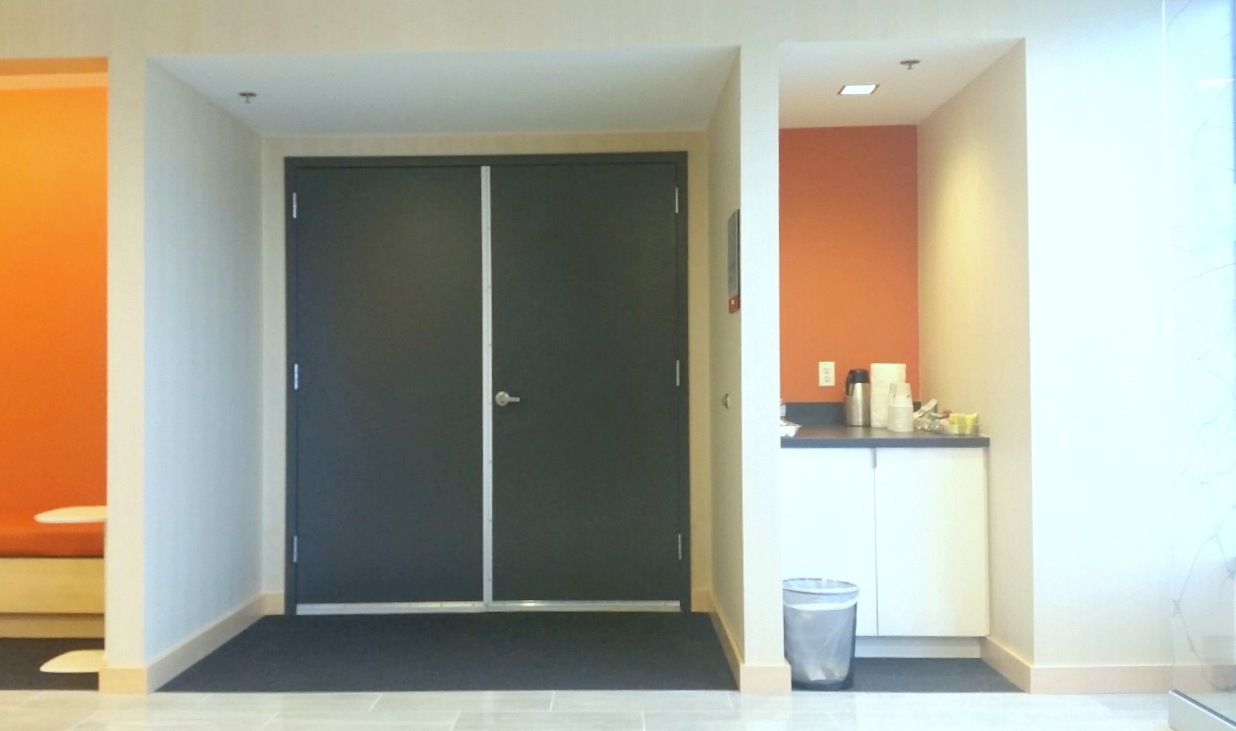 The two projects were:

• A plan to convert five vacant city-owned rowhouses on the 400 block of North Howard Street into 32 market-rate apartments with first-floor retail stores.

The open session of the meeting did not address the large gap between the appraised value of the buildings and the developer’s proposal.

When reporters were permitted to re-enter the meeting, the board announced that it had voted to recommend the project to Mayor Stephanie Rawlings-Blake contingent on her office entering into negotiations on the proposed sales price. The principals in the project were listed as Cyrous Akhavan, Mahyar Hashemzadeh, Afsaneh Siahpoush and David Gleason.

• A plan by Everyman Theatre to purchase, for $1, the city-owned vacant building at 109-111 North Howard Street to serve as classrooms, a rehearsal hall and costume shop, together with eight furnished apartments to serve as temporary housing for out-of-town actors and artists associated with the theater.

Formerly the Howard Furniture Store, the property is part of the “Superblock” of vacant buildings anchored at Lexington and Howard streets that has been in search of a developer for more than a decade.

The BDC has received four proposals to buy some of the city-owned parcels. The board unanimously voted to recommend the Everyman project to the mayor, and will hear the other proposals in the future.

Rehabilitation of the ex-furniture store – whose roof and rear floors have badly deteriorated and are in constant need of attention by city repair crews, the board was told –  will not get underway until May 2018.

The building is expected to be open to theater staff in early 2019.