The pest control magnate who flew Catherine E. Pugh, the Democratic candidate for mayor, in his private jet to and from Las Vegas for the “Maryland Party” last Monday is no stranger to local politics.

Walter A. Tilley Jr., his wife and his company, Home Paramount Pest Control, doled out more than $102,000 to Democratic and Republican campaigns and officeholders in Maryland since 2006, according to on-line records reviewed by The Brew.

Over the same period, Tilley’s company – which describes itself as “the premier pest management company on the East Coast” – has won various state and city contracts, including at BWI Marshall Airport.

Based on his campaign giving, Tilley was a staunch supporter of Democratic candidates until Anthony G. Brown was defeated by Larry Hogan in November 2014.

According to election board records, 12 days before his appointment was announced, Nancy Tilley contributed $1,000 to Hogan’s campaign committee. And four weeks after his appointment, Home Paramount wrote a check for $2,500 to the Hogan committee.

Contacted today at his Harford County office, Tilley did not respond to a request for comment by The Brew.

Reading up on Roosevelt

In the case of Pugh, the Tilleys have remained loyal. Even before the state senator officially announced her candidacy for mayor, the Tilleys were writing checks to her campaign.

They and their company contributed $15,500 during the primary, including a last-minute shot of $6,000 by Nancy Tilley shortly before the April 26 election. In addition, Pugh received $2,000 from their son, Walter A. “Butch” Tilley III, a member of the Harford County Liquor Control Board.

Pugh told The Baltimore Sun that when she found out that Tilley was flying his private jet to the Maryland Party, she hitched a ride.

Also on board was state-senator-turned-Home-Paramount-lobbyist John A. Pica Jr., who was paid $36,000 by the company to handle pest-control legislation and state contracts in Annapolis, and Thomas L. Bromwell, a former Baltimore County senator who was released in 2013 after serving five years in federal prison on racketeering and bribery charges.

It was a bipartisan flight. Along with Pugh and the two former Democratic politicians, Maryland Senate Minority Leader, Republican J.B. Jennings, flew in Tilley’s private jet.

Jennings, who represents Harford County’s 7th district, told The Sun that his consulting company has a contract with Home Paramount and sells its services to property owners. 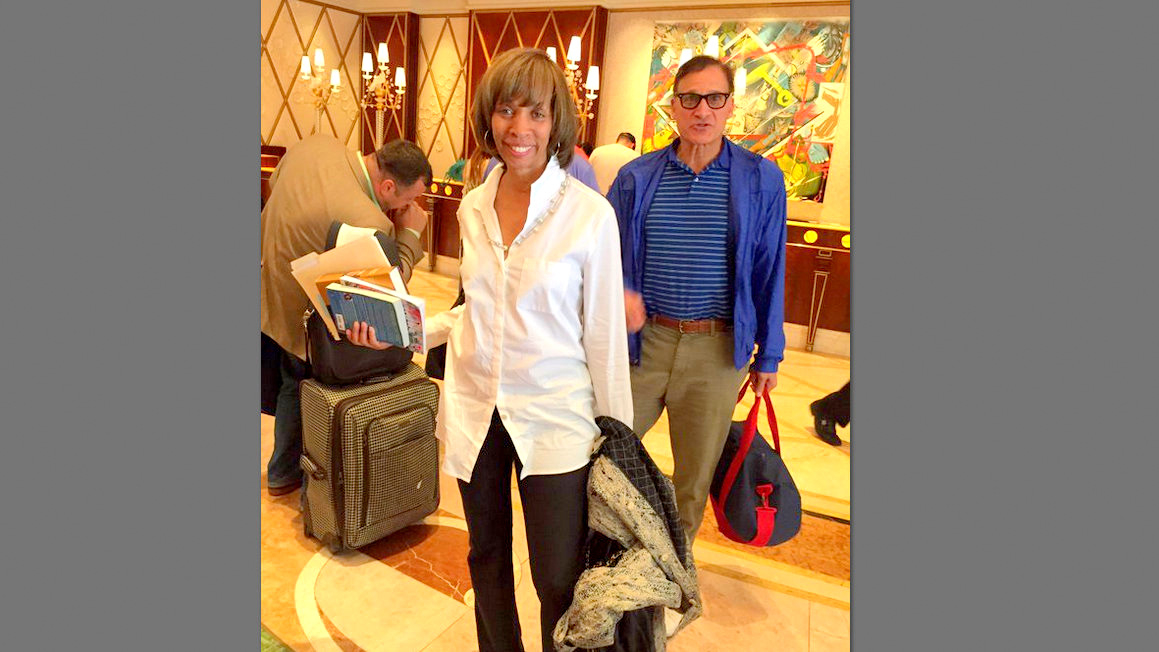 Democratic mayoral candidate Catherine Pugh registers in a Las Vegas hotel on Sunday. Behind her is John Pica, the lobbyist for Home Paramount Pest Control. (@larryhow)

Pugh said she paid Tilley $650 for the trip, similar to the cost of a ticket on a commercial plane, and spent the flight reading a book about Theodore Roosevelt.

Mix of Public and Private

We have been writing about the “Maryland Party” (here and here), which began in 1998 as a small luncheon among Maryland real estate insiders and has since morphed into a “must-go” event that attracts about 1,500 businessmen and 100 or more state, city and county officials.

The massive party coincides with the yearly convention of the International Council of Shopping Centers, always held in the Nevada resort town.

The boundary where official business ends and private access to decision-makers begins is hard to discern.

Three years ago, Rawlings-Blake was caught officiating at the wedding of two top lobbyists, Sean Malone and Lisa Harris Jones, at a celebration whose guests included state Sen. Catherine Pugh.

Like many participants at the Maryland Party, Tilley dispensed with the shopping center convention this year and concentrated on the social events of Sunday and Monday. So apparently did Pugh.

He took a commercial flight to Las Vegas, according to his office, arriving in time for a private reception on Sunday with campaign contributors at Caesars Palace, courtesy of the Republican Governors Association. Maryland Democrats partied the same night with donors at the nearby MGM Casino.

Republican and Democrat officeholders then converged on Monday at the Wynn Las Vegas Resort’s Encore Beach Club for the poolside cabanas, open bar and lavish entertainment of the Maryland Party.

This year’s party was estimated to cost $500,000 by the Baltimore Business Journal, most of it underwritten by private contributions from Maryland developers and related parties.

Contributors included Sagamore Development (seeker of $535 million in TIF subsidies for its proposed Port Covington project), Cordish Companies (owner of Power Plant Live in the Inner Harbor), and Caves Valley Partners, the principals behind the Stadium Square apartment project in South Baltimore and a minority investor in Horseshoe Casino Baltimore.