More than two months after city officials learned that raw sewage was leaking into Chinquapin Run, sewage is still flowing there this week, according to Blue Water Baltimore.

Alice Volpitta, Blue Water’s water quality manager, went Monday to the spot near the Loch Raven Boulevard bridge where a sewer line crosses the stream and saw the tell-tale milky fluid and toilet paper spewing from a crack in the pipe’s concrete casing.

“You could see a clear difference downstream,” Volpitta said in a phone conversation with The Brew.

“Above it, the water was clear,” Volpitta said. “Below it, the water is gray and you can see bits of toilet paper shooting out of a crack in the concrete encasement.”

It was the same scene that had greeted a fellow staffer from Blue Water Baltimore a month earlier, on May 10, Volpitta said. Photos from each visit confirm their accounts of leakage from the submerged pipe.

But city officials said the leak, which they publicly disclosed in April, was abated on May 26.

“It’s possible something else is going on,” Raymond said. “If there are additional steps to be taken, we’ll look into it.”

DPW Knew of Break in March

Whether what Blue Water saw was a new break, or the old one, was unclear. But city waterways polluted with smelly, cloudy-looking, toilet-paper-flecked water are a costly problem for Baltimore.

The apparently continuing pollution release at Chinquapin Run comes as the city has unveiled the draft of an agreement it reached with the Environmental Protection Agency and Maryland Department of the Environmenta aimed at ending decades of planned and unplanned city sewage releases into local waterways.

Addressing the one at Chinquapin Run – and publicly reporting it – took a long time.

The city first disclosed the break in the 21-inch main on April 22. The DPW press release acknowledged that the agency had been “made aware” of the leak more than three weeks earlier – on March 30.

A spokesman said the agency did not disclose the public health threat earlier because the sewage flow wasn’t yet believed to have reached the 10,000 gallon reporting thresh hold.

The April 22 release had said work on the break should begin “within three weeks and should take four weeks to complete.” 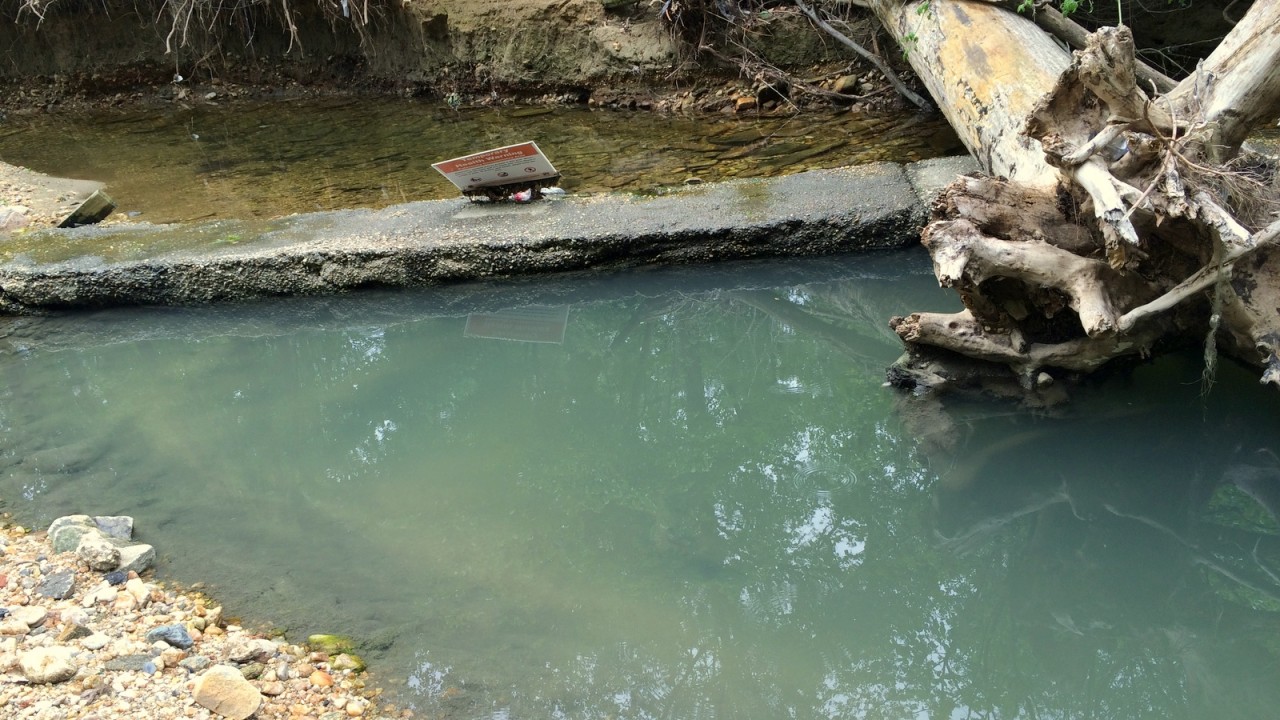 How the sewage overflow at Chinquapin Run looked on May 10. (Blue Water Baltimore)

Asked why a leak known since March 30 was not fixed until May 26, DPW’s Raymond said there were difficult circumstances.

“Due to the location of the leak near a stream and not near any roads, it was a difficult repair to plan and execute,” he said. “We also had to contend with wet weather which prevented us from getting heavy trucks and equipment to the location.”

Both DPW and Blue Water plan additional inspection of the site where Volpitta saw the sewage.

“We’re going to do some testing over there,” said Blue Water’s David Flores, the Baltimore Harbor Waterkeeper.

Raymond, meanwhile, pointed to DPW’s long-term plan fror Chinquapin Run. “The Department of Public Works is designing a new, larger pipeline to replace and relocate the old pipe away from the stream,” he wrote in an email. “It will eliminate all leaks and provide additional capacity, necessary for the long term. This new pipeline is scheduled to be in service within two years.”

He added, “As always, we urge people to stay out of urban streams due to the possibility that the water is contaminated.”

“I just went out to check on this spot again, and unsurprisingly the sewage is still flowing. In fact, it seems to have gotten worse, and it’s flowing more heavily than it was on Monday. I took a couple of water quality samples (one from upstream of the pipe, one from downstream in the sewagey area) and ran an ammonia test to determine whether or not it’s actually sewage. Here’s the results:

To give you some context, the Ammonia threshold that indicates there may be sewage contamination is 0.30 mg/L, so this is definitely sewage.”

“To clarify further, the assessment threshold value of 0.30 mg/L Ammonia that we employ is used widely to determine whether the dry-weather discharge from a stormwater pipe, not a stream, is likely contaminated with sewage.

In this instance, the in-stream value of 1.72 mg/L Ammonia is very high considering the possible effect of dilution from upstream levels of 0.00 mg/L Ammonia.

Bottom line, based upon the physical evidence of wastewater debris (i.e. toilet paper) and leaking flow that Alice documented and observed, along with this Ammonia data, we are very confident that sewage is still leaking from this pipe.”