This morning’s derailment of a CSX freight train in the Howard Street tunnel resulted in no leaks from the 13 derailed cars. But the “what-if “scenario is frightening for Baltimore communities living near the train tracks – and infuriating as well.

Last January, neighborhood associations and environmental groups concerned about the millions of gallons of crude oil passing through Baltimore every year by rail persuaded City Council President Bernard C. “Jack” Young  to introduce a bill that would have given them some peace of mind.

The advocates went to Young and the City Council after they were unable to get a response from the Rawlings-Blake administration, according to Chesapeake Climate Action Network organizer Jon Kenney. “We asked for meetings, but they just never got back to us,” he said.

The introduction of Bill 16-0621 followed a Council hearing last July where dozens spoke of the potential devastation of an oil train derailment in Baltimore.

The bill was sponsored by the entire Council and would require the Health and Fire departments, Mayor’s Office of Emergency Management and other agencies to examine the health risks posed by oil trains running through Baltimore and prepare a response plan in the event of a spill or explosion.

Since the bill’s introduction on January 26, it has languished in the Judiciary and Legislative Investigations Committee with no agency reports requested or any public hearing scheduled.

There were 13 freight cars that derailed about 5:30 a.m. in the mile-long Howard Street tunnel, according to spokesman Rob Doolittle.  Twelve of the cars were empty and one contained acetone, a flammable solvent used in products including nail polish remover and paint thinner. There are no reports of leaks or spills or injuries. The train consisted of eight locomotives and 124 cars. Other contents of the train included scrap iron and acid.
_________________________________

“They said they don’t have the capacity to hold a public hearing because of other priority bills they want to pass before the end of their term, and that this bill is exactly the type of thing that a new City Council will pass and sign quickly,” Kenney told Westport Community Association President Keisha Allen in an email at the time.

“I don’t buy it,” Kenney said in an interview today. “It doesn’t seem that hard to have a public hearing.”

Young’s Office: “We Have a Lot Going On”

Allen said this morning’s derailment reminded her how much danger residents living near CSX tracks face from freight trains, and how Young’s foot-dragging leaves them at risk.

“Going back to 2014, we’ve been trying to get Jack Young to submit legislation to ban these things, or get them routed away from the city or have city be alerted when one is coming in from North Dakota,” Allen said, speaking with The Brew.

“This was just a bill to do studies and hold a hearing. I don’t see what the problem would be with it.” she said. “The residents feel defeated. I just can’t defend the city anymore.” 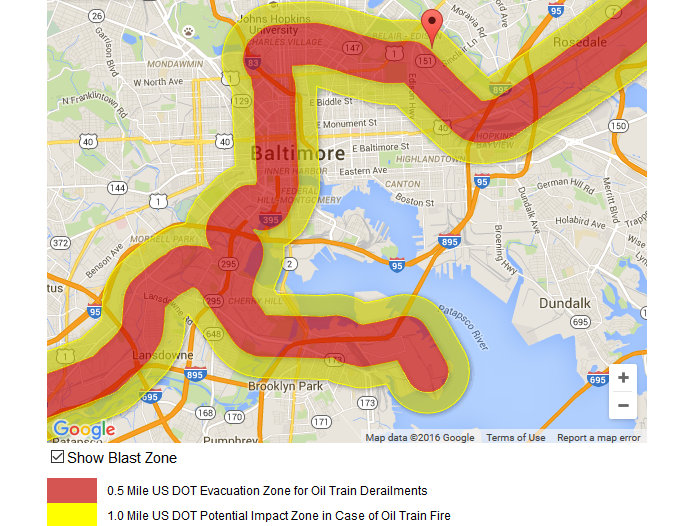 Young’s aide, Lester Davis, said today that Young’s failure to move the bill forward doesn’t mean it is not a priority.

Kraft did not return a phone call today seeking comment. The First District Councilman will be leaving office in December.

Passes by Dozens of Neighborhoods

Living in Westport, which has two CSX rail spurs used by the oil trains, Allen has been concerned about community safety, especially in light of the 2013 derailment in Lac-Mégantic, Quebec, that killed 47 people.

The train was carrying Bakken crude oil from North Dakota when it jumped the tracks and exploded.

Responding to a public information request from the Baltimore Sun and other media organizations, CSX Transportation acknowledged last year that it moves up to five trains through Baltimore every week, each train carrying 1 million or more gallons of crude oil.

The company said that some of the crude oil trains operate along the very route of this morning’s derailment.

The CSX rail line runs from Bayview in East Baltimore to the far southwest, passing through such neighborhoods as Berea, Darley Park, Harwood, Charles Village and Remington.

The route turns south at Sisson Street, runs in a cut behind the Maryland Institute College of Art (MICA), passes through the Howard Street Tunnel, re-emerges at Camden Yards and runs past M&T Bank Stadium, Sharp-Leadenhall, Carroll-Camden, St. Paul and over Gwynns Falls.

The oil trains typically circle through Morrell Park, Westport, Cherry Hill and Brooklyn on their way to a rail-to-barge terminal in Fairfield next to Curtis Bay, where the oil is shipped to East Coast refineries.

More than 165,000 Baltimore residents live within a one-mile radius of the train tracks, according to Chesapeake Climate Action Network.

Also affected by the route of the CSX oil trains: eastern Baltimore and Harford counties from White Marsh north to the Susquehanna River and Anne Arundel and Prince George’s counties along the rail line used by MARC Camden Line trains.

For Allen and others who are within that danger zone, incidents such as today’s derailment are terrifying. Just five months ago, Marilaine Savard, a Lac-Mégantic resident, spoke in Baltimore about what happened in her small Canadian town.

Allen said that Savard talked about a bar that was next to the rail tracks.

“The people who died in there were singing ‘Happy Birthday’ right before it happened,” Allen said. “It made me think about Colleen’s Corner Tavern that’s right next to the tracks in Westport. That could be us.”

Today’s Howard Street tunnel derailment is not the only close call to worry Allen. In February, a CSX train carrying hazardous material derailed in Fairfield, which inspired Allen to write to Young recently about the absence of a public hearing on the bill. 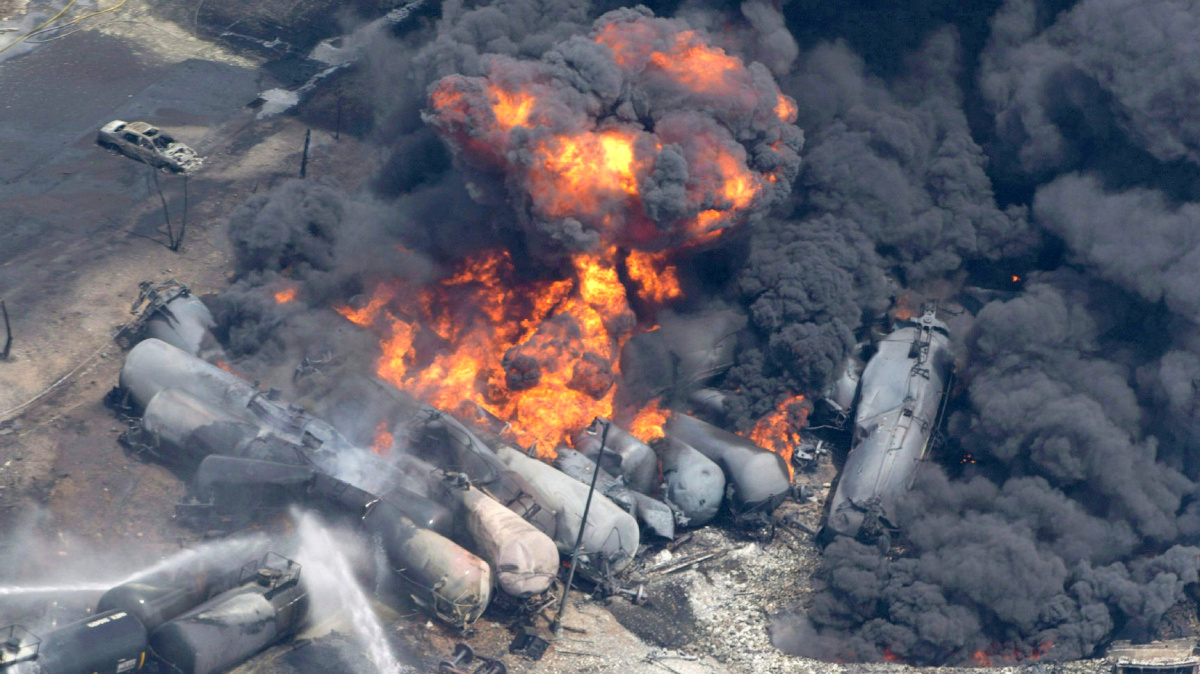 “The February incident should have been a wake-up call to City Hall as to how horrific things could have been,” she wrote.

While the Mayor’s Office of Emergency Management initially reported that the derailed train had struck a building, CSX later said that it did not hit a structure, and that there were no injuries.

Looking for reassurance that City Hall was acting to ensure public safety, Allen told Young that his plan to postpone action on the bill is “disappointing, discourteous and just plain lazy.”

To find out how close you are to an oil train blast zone, go to this link http://explosive-crude-by-rail.org/  for an interactive map by the group STAND. Just plug in your zip code.