When Bernard Johnson and his co-workers noticed the huge cracks appearing in their East Baltimore building last fall, they worried.

Some 70-80 people work at the austere, red-brick building at 428 East Preston Street, a Maryland Parole and Probation field office.

In trying to get the higher-ups’ attention, Johnson, who is secretary of AFSCME Local 3661, documented all the signs of trouble:

• He photographed the cracks that had appeared inside and on the outside of the building.

• He took shots of the boarded-up front windows where the building seemed to be breaking in two and the window glass had cracked.

• He photographed the sunken part of Preston Street that causes a ka-boom that can be  heard inside the building whenever a passing truck or bus fails to slow down.

• And he noted the slumping of the building across the street.

Johnson said he then made phone calls to City Hall, to Baltimore’s 311 center and to the Maryland Division of Occupational Safety and Health. He also mailed a petition of concern signed by 52 co-workers to Parole and Probation headquarters.

Finally on January 7, when no one at the monthly labor-management meeting seemed to be taking their concerns seriously, Johnson had enough. 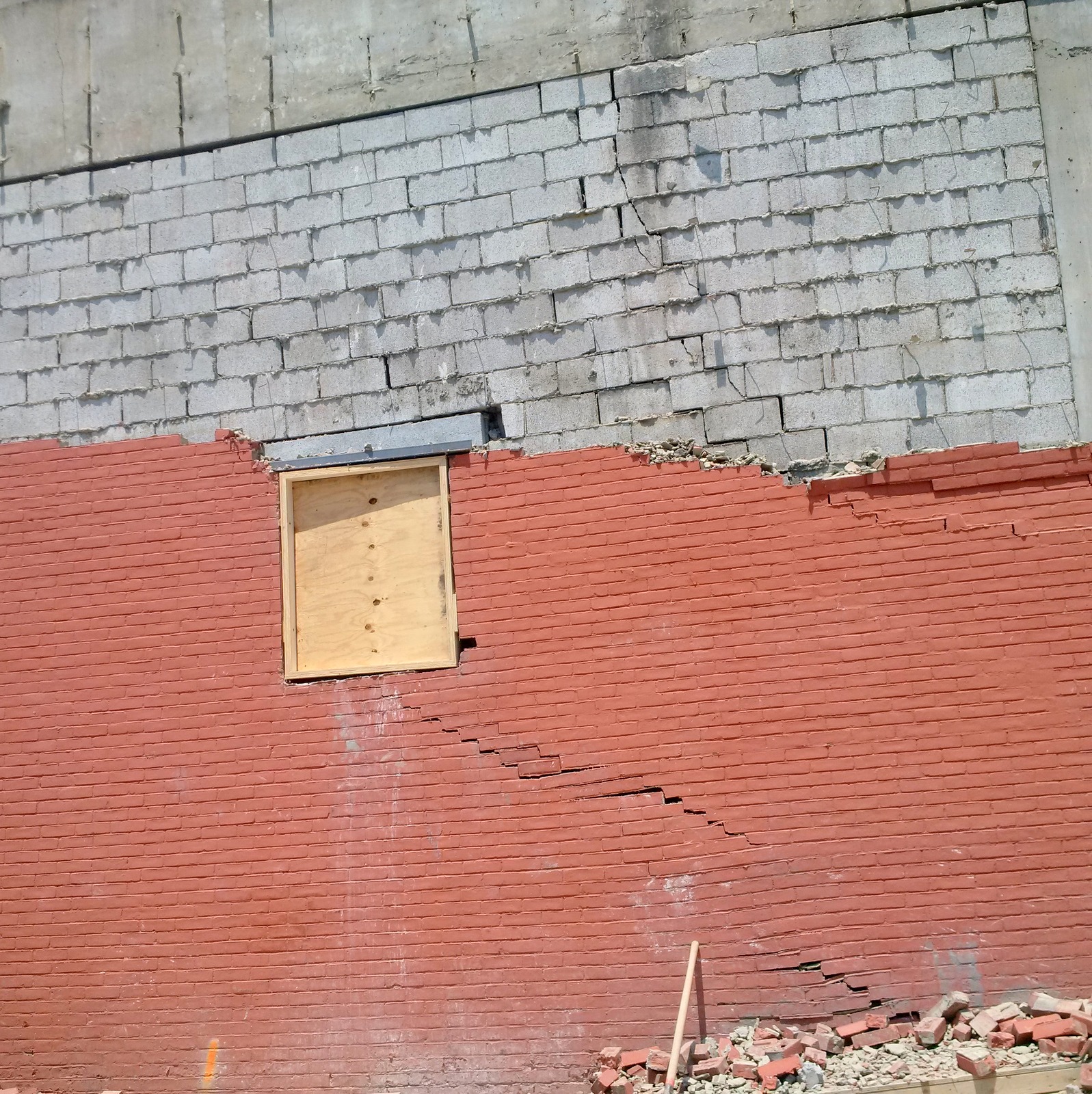 The worst cracking is at the southeast corner of the building. (Fern Shen)

“I threw the pictures I had down on the table and said, ‘No state agency should be in a building with boarded-up windows and cracks!’ ”

“The employees felt so disrespected,” Johnson recalled. “If this was a private house, they would condemn it.”

State officials and the building’s owner say a water main break, now repaired, was the cause of the cracking and that the building has been stabilized and is safe.

Johnson said he and many of his co-workers are not reassured.

“You’ve got all these water main breaks and structured overflows of millions of gallons of sewage under this building,” he said. “What if it happens again?”

Johnson was referring to Sanitary Sewer Outfall 72, located underground just behind the building, where the city releases sewage-mixed-with rainwater into the Jones Falls to take the pressure off its failing sewer system.

The amounts are striking. During just four months recently (between December 1, 2015 and March 31, 2016) 29.9 million gallons of sewage mixed with rainwater were released here, according to public data uncovered by the Environmental Integrity Project .

In an effort to meet federal consent decree deadline to stop the intentional sewage releases, the Department of Public Works has closed most of the outfalls in the city, but has left a few of them open, most prominently Sanitary Sewer Outfall 67 that is upstream from No. 72 on Falls Road.

Asked over several weeks by The Brew to discuss the design of SSO 72 and its possible relationship to the instability found at 428 East Preston Street, DPW has failed to respond with substantive information.

“Our engineers want to review the work orders from the past few years and double check the condition of the various utilities in the area,” spokesman Jeffrey Raymond said at one point.

The building’s owner, Larry Boltansky, said he is also frustrated by his attempts to get answers from DPW.

“I’ve had about as much success as you’ve had,” Boltansky said. He described the cost of the repairs he had has to perform on the building “considerable” and added that he is negotiating with his insurance company over them.

Boltansky, who bought the building from the city in 1996 and brought Parole and Probation in as a tenant the following year, lead a reporter on a tour of the structure on Friday. (It was formerly owned by Waverly Press.)

He noted that an earlier break of the sewer main on Preston Street was repaired by DPW in 2012.

“Hairline cracks” appeared afterward in the west end of the facade, near the spot of the sewer repairs, but engineers monitoring the building determined there was no building movement, he said.

Then last August 14, Boltansky got a call from the tenant telling him about new “cracks out front and some wall movement in the interior.” The floor inside the building was now sloped.

Boltansky and his engineers opened the manhole cover in front of the building.

“We were overcome by the smell of chlorine,” he recalled. “Within a day or so, the city dug up here and fixed the fresh water line. I can’t tell you if that was leaking for a day, a month or six months.”

Boltansky said his engineers concluded that the water leak went under the grade beam and washed away the soil.

“We dug down five feet to the bottom of the footing, which in this case is a grade beam, and it was cracked. It had collapsed. The footing had broken at the cold joint,” he said. This happened “in October or November.”

Throughout this period, state employees remained in the building, but were moved away from the affected area “as a precautionary measure.” This, Boltansky said, was on the advice of his structural engineer who “checked all the columns and the beams in the building” and declared them safe.

In March, work was started to stabilize the building.

Johnson believes he kicked the process into gear when he found a sympathetic official at city’s Housing Code Enforcement office. Boltansky said the long delay was simply a result of the difficulty of analyzing the problem and getting on the schedule with his general contractor, Haywood Baker.

Working nights and weekends, Haywood Baker sank 35-foot-deep helical piers at five-foot intervals in order to support the building. They drilled 72 holes in order to inject “a fine concrete product that would take the place of the soil,” Boltansky said. The windows were removed and boarded over because the workers pumped the concrete in through them.

Over Memorial Day weekend, the old brick facade was torn off, exposing cracked cinder blocks. Interior walls have been rebuilt and a ramp built to accommodate the difference in height in what is now essentially a split-level building.

“The floor dropped because of what happened,” Boltansky said, explaining that the collapse caused “an 8- to 9-inch differential. . . We maybe lifted it back up a quarter of an inch.” 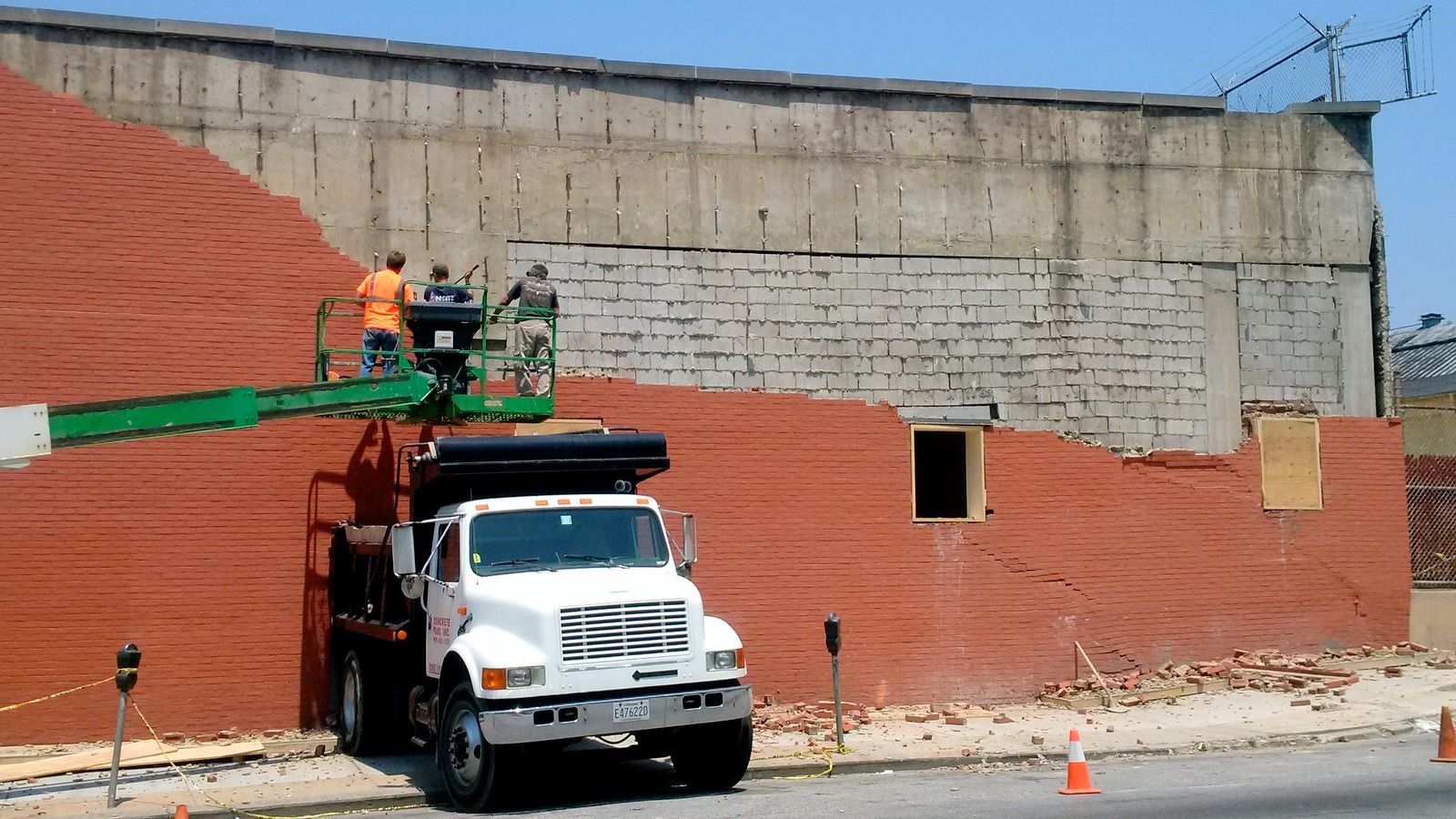 On May 29, workers remove the brick facade of the Preston Street building. (Fern Shen) 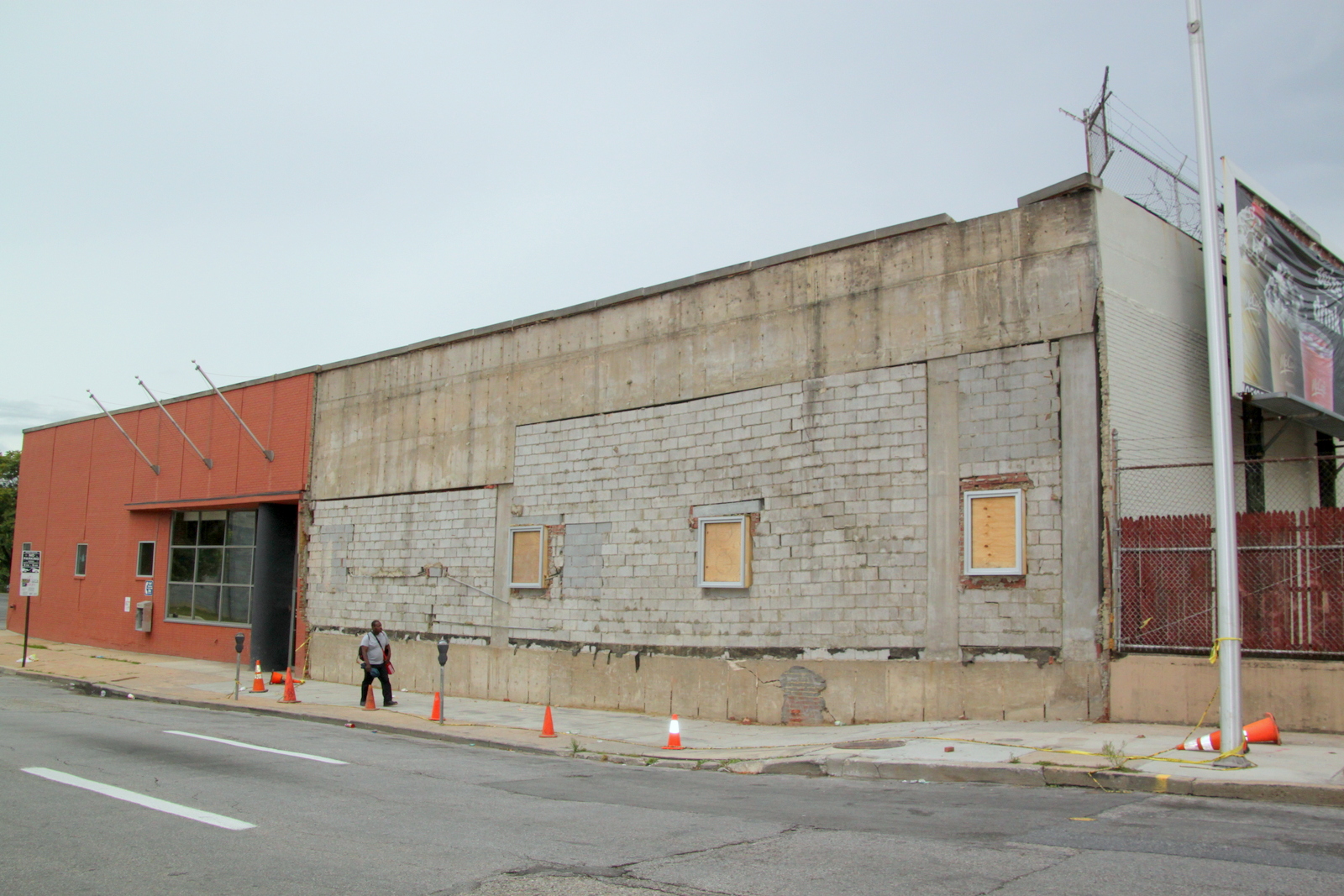 Johnson and other employees are not reassured that the cracked wall is being covered over with new brick. He fears the repairs are a band-aid measure that ignores subsurface problems caused by the sewer and water breaks.

“But this doesn’t make up for the basic problems. You can see the cinder blocks under the brick facade are all cracked,” he said. “I just don’t understand: why does only the bare minimum get done?”

Johnson and other employees at a recent union meeting said they don’t believe they should be working in the building, even with the repairs done.

One said a piece of ceiling tile had fallen on a co-worker’s desk. Several said the toilets have a history of backing up, and that the water is milky and shunned by employees.

“Why does my drinking water look cloudy sometimes?” says the handout from the U.S. Geological Survey printed out and taped to the bathroom doors in the building. 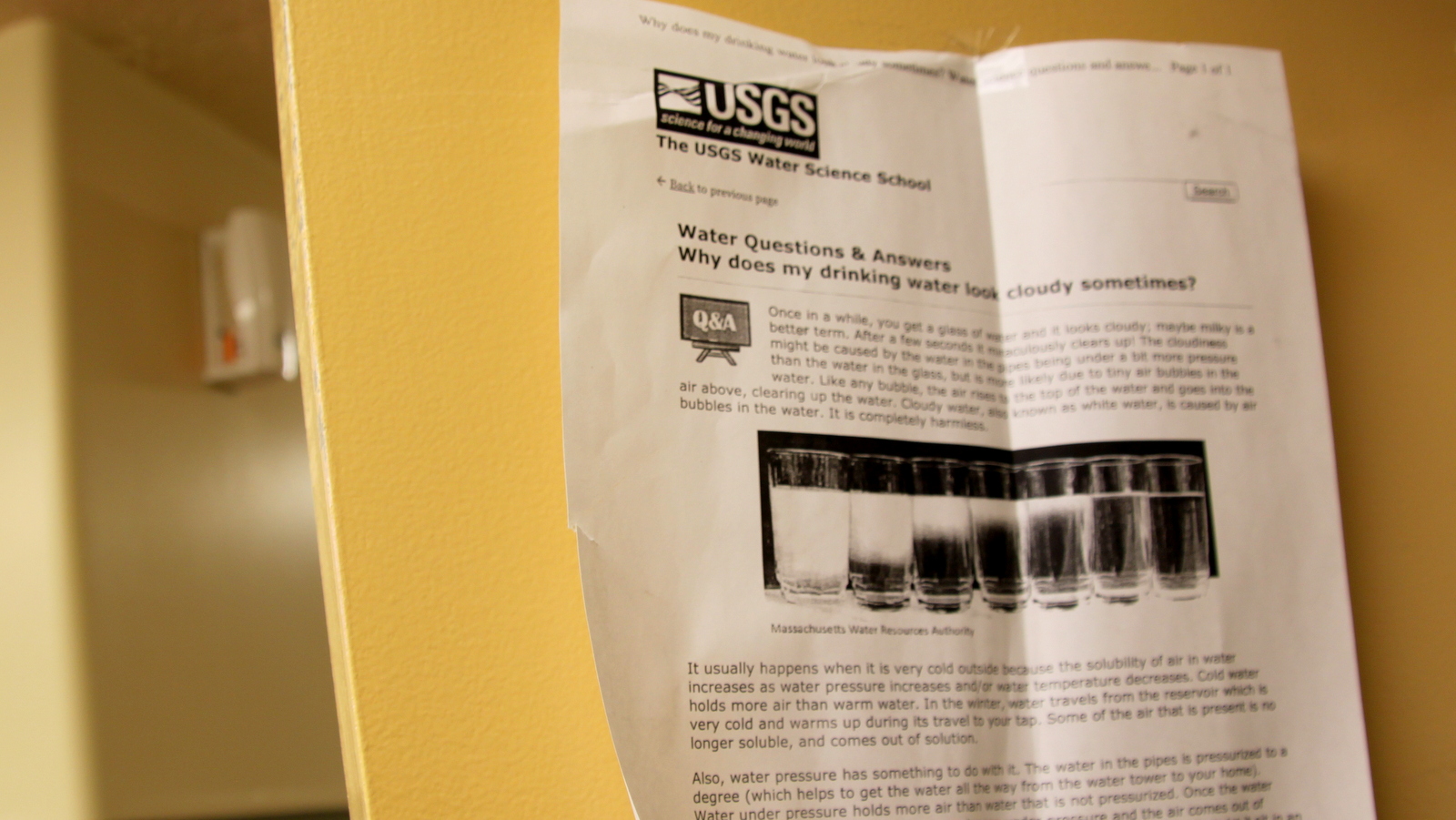 “With communities not wanting to have offenders in the neighborhood,” he said, “field offices are frequently moved or located in not-very-healthy buildings, with asbestos and things like that.”

Boltansky noted that the state’s structural engineers have approved his strategy for stabilizing the building.

The state has, however, withheld the rent for the portion of the building employees vacated after the incident, according to the Department of General Services. (The lease for this 15,912-square-foot property is with Komar Properties LP, at an $240,748.56 average annual rent, a spokeswoman for the agency said.)

Boltansky said it comes down to his integrity as a commercial landlord: “I would never have a property where I have somebody in there that is in a dangerous situation.”

He said he doesn’t believe SSO 72 is the cause of the water break, but he still has questions about the overflow pipe that are waiting answers from DPW.

“Where is it? What does it look like?” he said. “We’re working to get that information from them.” 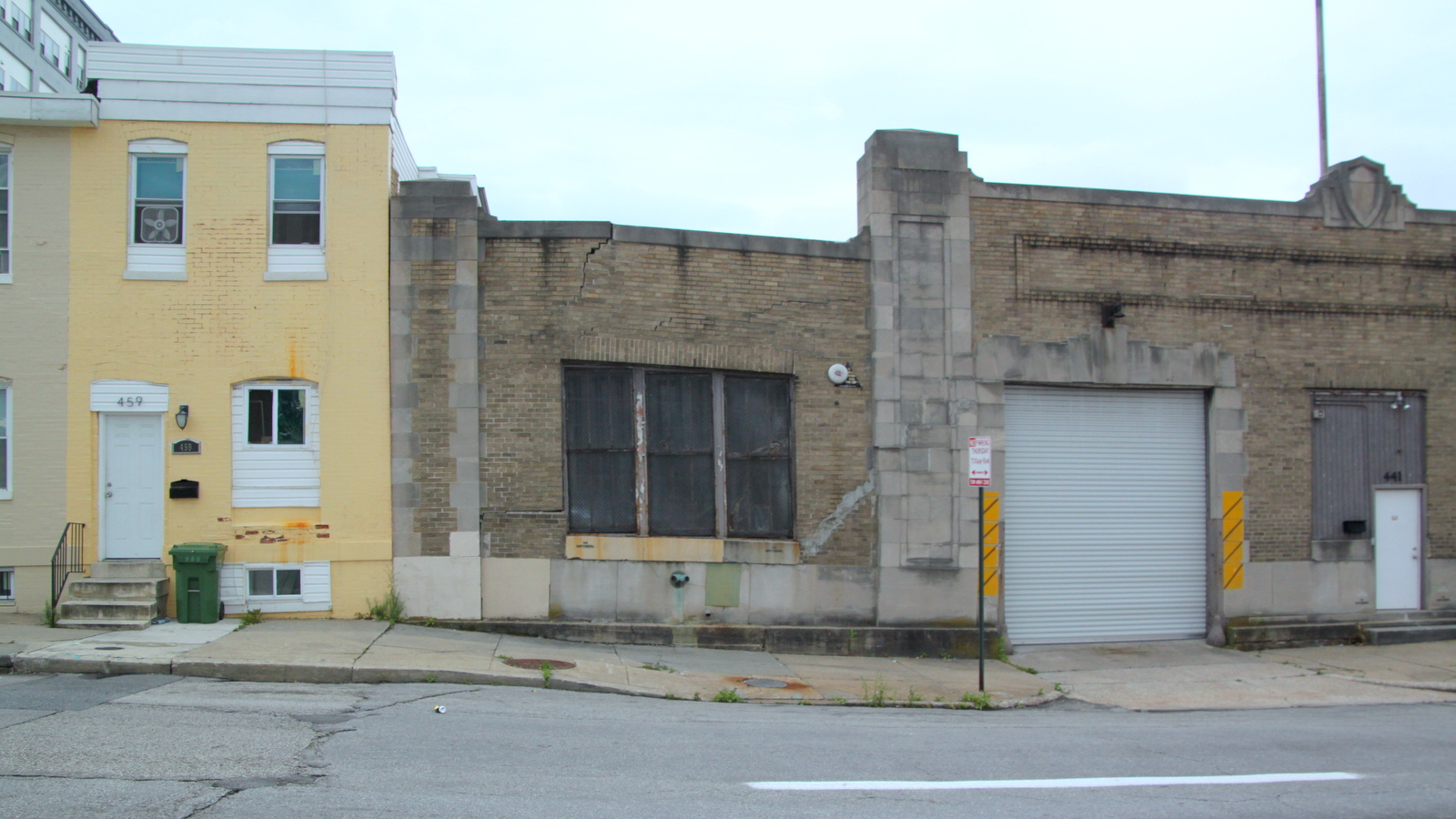 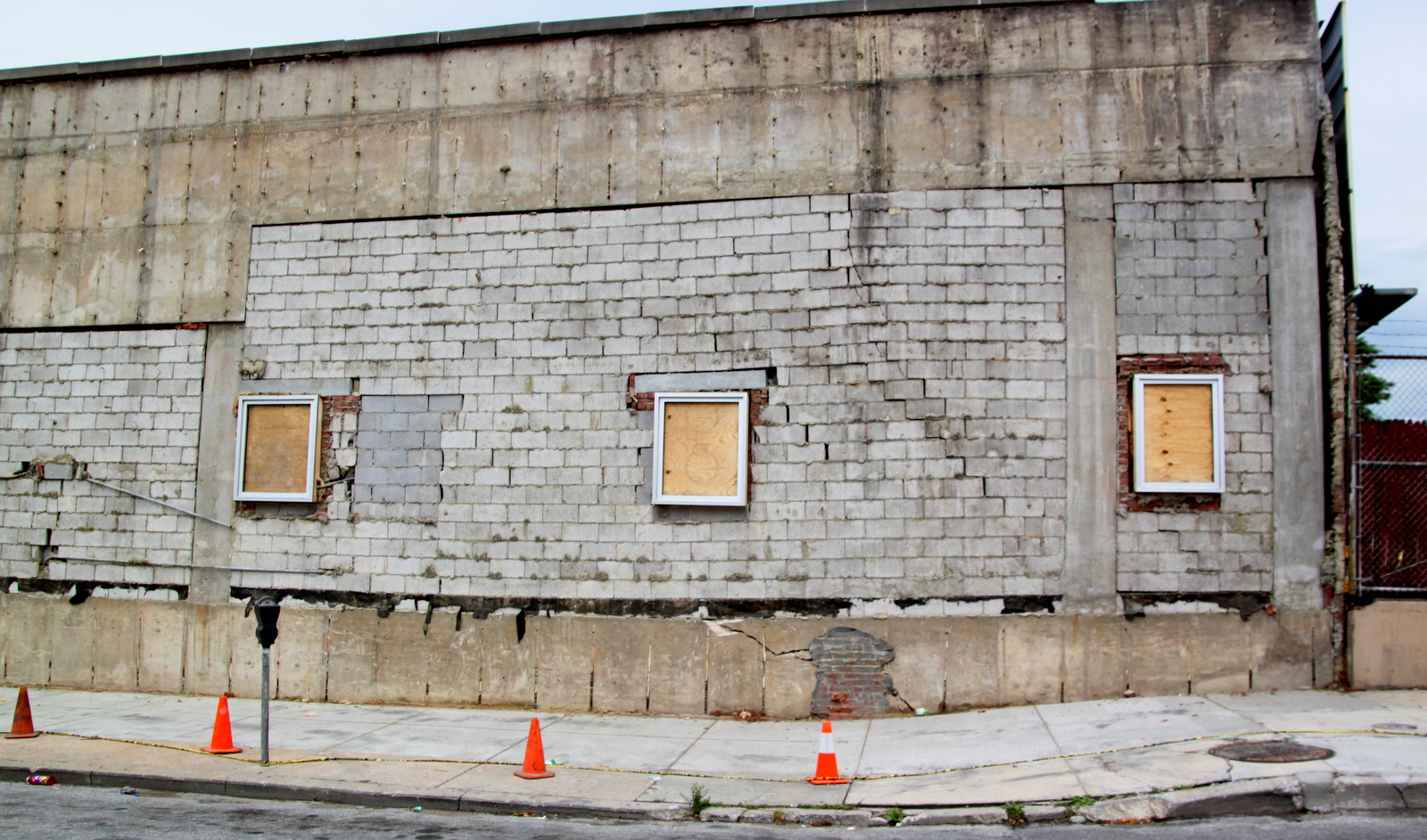 Stabilized with piers, the Preston Street building will have its facade re-applied soon. (Fern Shen)