Mayor Stephanie Rawlings-Blake will spend a bittersweet five days in Indianapolis presiding over the annual meeting of the U.S. Conference of Mayors, then surrendering her title as the conference’s 2015-16 president.

Rawlings-Blake is set to fly to the conference on Thursday and return to Baltimore next Tuesday.

Deputy Mayor Andrew Smullian and Jason Perkins-Cohen, director of the Mayor’s Office of Employment Development, will also attend the meeting.

The mayor’s hotel and food expenses will be paid for by the Conference. Smullian’s six days in Indianapolis will cost the city $2,390 and Perkins-Cohen expenses will amount to $1,918, according to this week’s Board of Estimates agenda.

At the conference, Rawlings-Blake will preside over speeches scheduled for presumptive Democratic Party nominee Hillary Clinton and the 14th Dalai Lama of Tibet, who will be talk about “building compassionate cities” with kindness.

Baltimore’s lame-duck mayor will also present the Mayors Climate Protection Awards and address the issue of criminal justice reform with White House Senior Advisor Valerie B. Jarrett, according to the meeting’s agenda.

As the outgoing president of the Conference (her term began last June), Rawlings-Blake will be honored at a late night reception at the Indianapolis Marriott Hotel on Sunday. 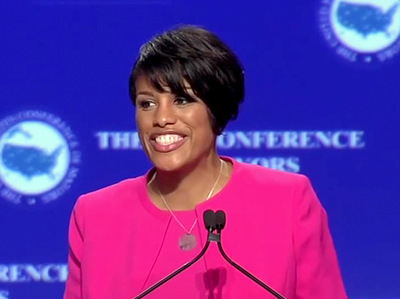