Hardest hit in Maryland was the historic downtown of Ellicott City, evacuated amid flooding which caused the nearby Patapsco River to rise 14 feet in less than two hours, according to the National Weather Service.

With total rainfall at about 6.5 inches in Ellicott City, the storm was of a severity that happens only about one every 1,000 years, according to the Weather Service.

Gov. Larry Hogan declared a State of Emergency in Ellicott City where crews were working this morning to clear the streets of timber, trash, fallen trees and ruined cars. 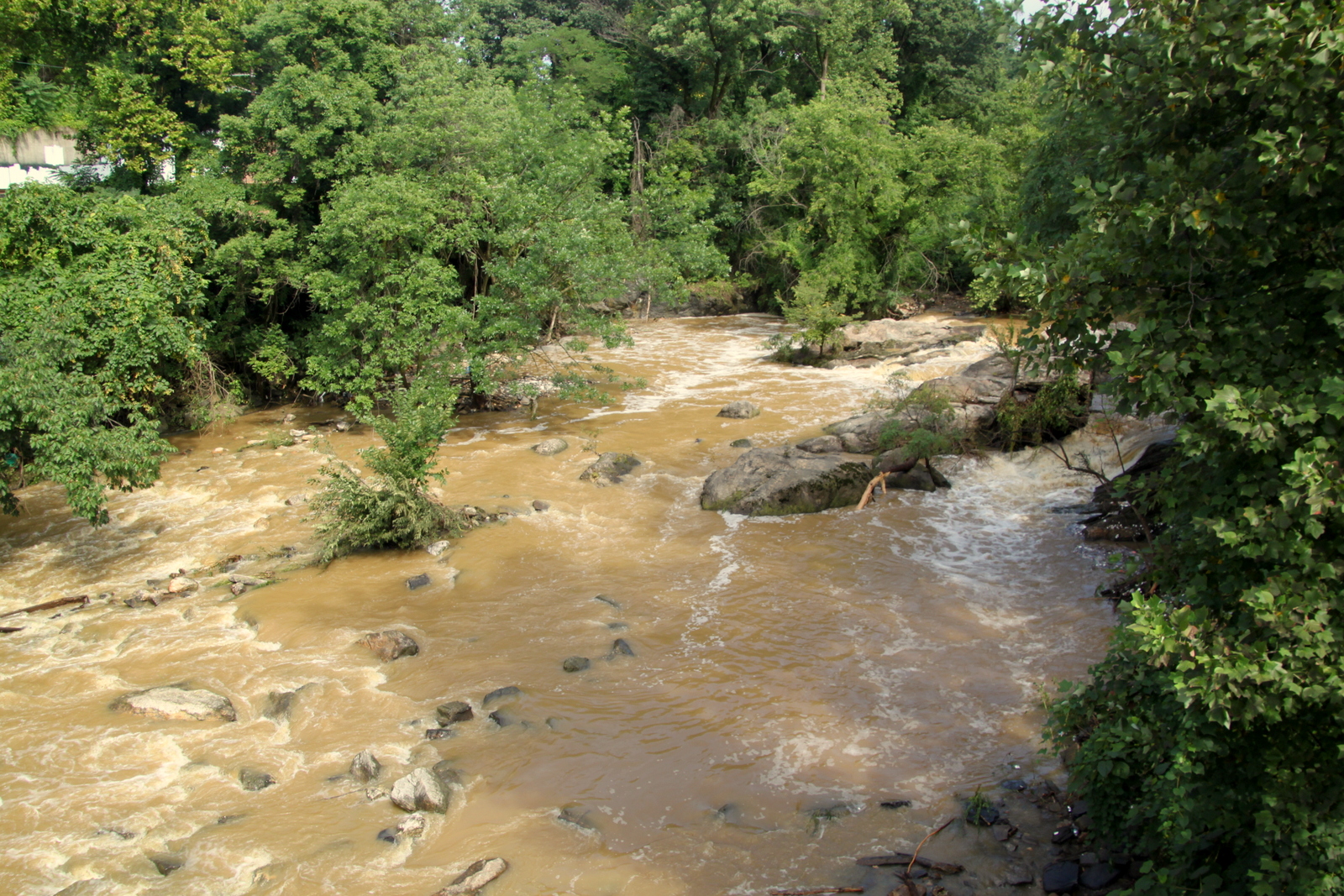 In Baltimore, some of the worst damage was along the Jones Falls, particularly at Meadow Mill, where a crowd gathered yesterday to gawk at the stack of three cars pushed up on top of each other.

“We’re looking for our car – it was parked right there,” said a man walking in the Meadow Mill parking lot with his wife, as workers hauled off the logs and railroad timbers left behind in the low-lying lot by the rain-swollen river.

Beside them, the odor of raw sewage was strong as the still-high Jones Falls churned away, with what appeared to be temporary Class IV rapids in places.

The odor and damage from flooding discernible all along Falls Road, which was rendered impassable during the height of the storm by flooding that covered much of the roadway.

A single orange traffic cone warned motorists away from the four sewer manhole covers at 1901 Falls Road that had been displaced by the geysers of sewage-soaked rainwater that erupted during the storm.

Those manhole covers are near Sanitary Sewer Outfall 67, a pipe just above the Baltimore Streetcar Museum where the city knowingly releases millions of gallons of raw sewage when heavy rains overwhelm the city’s aging sewer system. 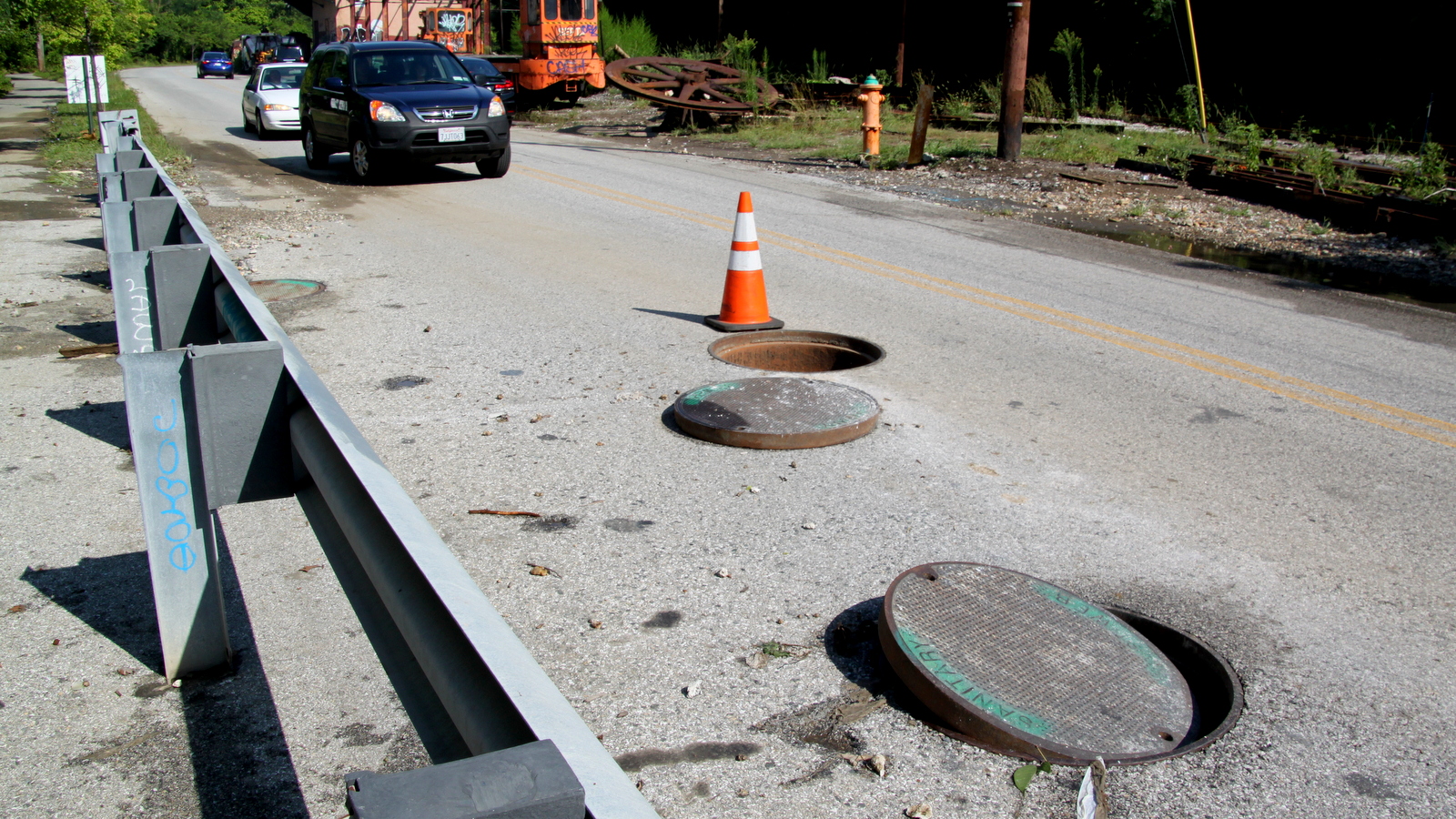 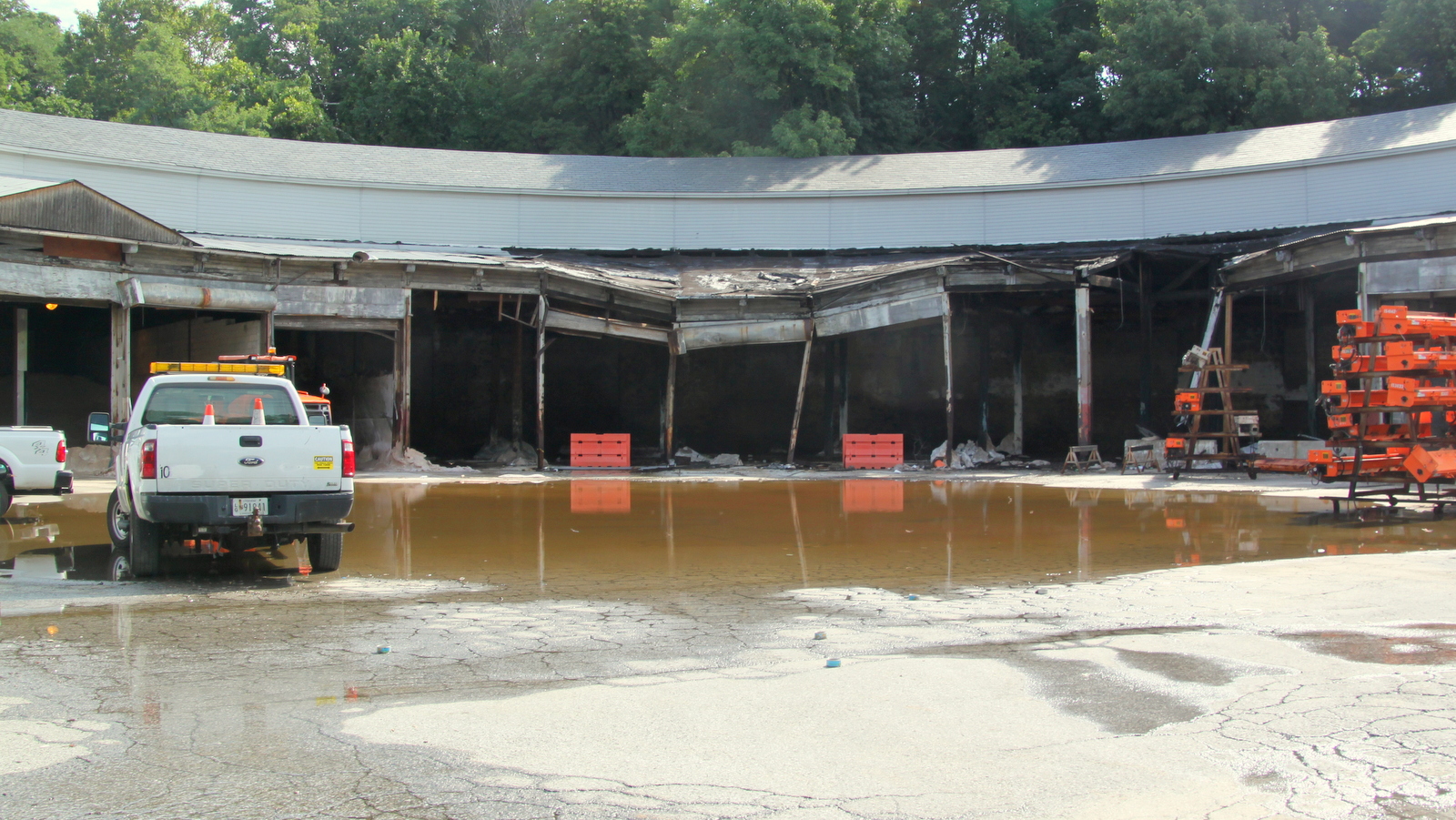 The old railroad roundhouse, used by the city to store salt, had a lake in the parking lot Sunday morning. (Fern Shen)

Nearby, mosquitoes and dragonflies hovered around a mini-lake that had formed in front of old Pa & Pa Railroad roundhouse at 2601 Falls Road, a Highway Maintenance Division facility for the Baltimore Department of Transportation.

A security guard at the building Sunday said the water did not rise to the level of the road salt the city stores there: “They moved [the salt] out of the way just yesterday.”

Asked how much sewage was released during Saturday’s historic storm – along Falls Road and elsewhere in the city – Department of Public Works spokesman Jeffrey Raymond said the city is still calculating the totals and will report them as soon as they become available.

The walking and biking path that goes past SSO 67, part of the Jones Falls Trail, appeared to have collapsed further into the embankment leading down the stream-bed as a result of the cascading waters.

“A lot of the items in the store are okay with a rinse-off,” shopper Margaret Suman said, emerging from the store. “They’re having a “flash-flood sale” on Wednesday.