Unable to scrounge the votes needed to pass her $15 an hour minimum wage bill, chief sponsor Mary Pat Clarke kept it alive tonight, just barely, persuading colleagues to send it back to committee.

With City Council members Warren Branch, Rochelle “Rikki” Spector and James B. Kraft leaving the chamber at points just before the vote, it was unclear how the final tally would come out.

They eventually returned, and the body voted 8-6, with one abstention – Councilman Carl Stokes – to return Council Bill 16-0655 to the Labor and Employment Committee.

“It passed eight yes, six no and one Carl,” Councilman Scott quipped about the vote to return the bill to committee.

Proponents of the bill, the subject of months of intense lobbying, said they remain undaunted.

“It’s not over, it’s just a delay,” said Ricarra Jones, an organizer for Local 1199 of the healthcare union SEIU. “We just want to make sure we get the best legislation possible.

“The Council’s actions send a clear message that there is support for compromise,” President Young said in a statement on the vote.

But the prospects for the bill appear cloudy, especially in the near term.

Stokes is on record firmly in opposition to the bill, and Committee Chair Curran said he won’t let the bill out of committee unless it has the needed eight votes on the floor.

“We will have the $15 minimum wage, absolutely,” Clarke said, acknowledging that she might have to wait until December – when newly elected Council members take office – to make good on her vow.

The city does not have a minimum wage. Employers in Baltimore are required to pay the state minimum wage, which rose to $8.75 an hour last month and will increase to $10.10 by 2018. 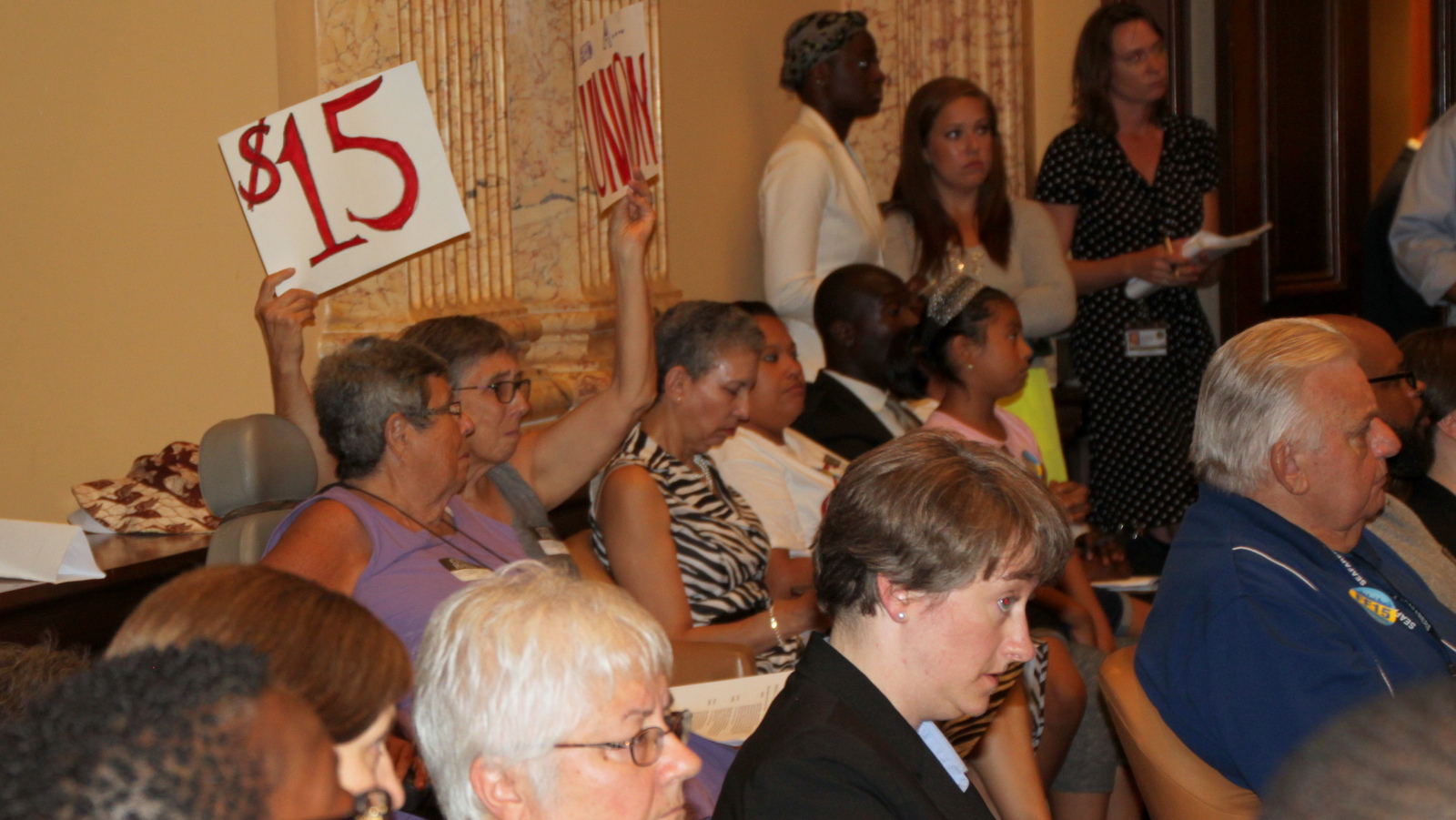 Advocates of the $15 an hour minimum wage lobbied hard for the measure tonight. (Fern Shen)

Clarke’s bill would raise the minimum wage in phases until it reached $15 an hour by 2022. After that it would increase along with the cost of living.

Young has said raising the minimum wage in Baltimore, without a comparable change in surrounding jurisdictions or at the state level, would hurt small businesses and low-wage workers and drive employers out of the city.

Increasing prosperity for low-wage workers with a $15-an-hour minimum “would give them a way up and out of degrading poverty,” said Fr. Ty Hullinger, a Catholic priest and pastor of three parishes in Baltimore who gave the invocation at the start of tonight’s meeting.