The aerial surveillance program conducted by the Baltimore Police Department that secretly recorded over 300 hours of citizens’ comings and goings since January is not the first time Persistent Surveillance Systems has spied on city residents.

The police department welcomed the Dayton, Ohio, company to fly over the city in 2008 to demonstrate its surveillance technology to two federal agencies, company president Ross McNutt told The Brew.

“We were showing it to the FBI and the U.S. Secret Service,” McNutt said. “The police in Baltimore let us come in to do a demonstration.”

The company’s camera-mounted plane, which films a 32-square-mile area from thousands of feet overhead and captures and archives this wide-angle footage, was deployed for “three or four days” in “April or May” of 2008, McNutt said.

The flights were intended to win contracts to provide the surveillance service to the federal agencies, not to pitch to the city police department, he said.

Facing a swarm of local media at an August 4 news conference after Bloomberg Businessweek broke the story, Baltimore Police spokesman T.J. Smith described the surveillance as a pilot project.

Smith has not yet provided a response to The Brew’s request for comment.

Frederick H. Bealefeld III, police commissioner in 2008 during the administration of Mayor Sheila Dixon, also has not responded to a request for comment.

Messages were left for Bealefeld at the corporate offices of Under Armour, where he is currently vice president and chief global security officer. They have not been returned.

Informed that secret aerial surveillance was conducted eight years earlier than police have said, civil liberties watchdogs have condemned the department for failing to disclose the surveillance at the time and failing to explain its apparently years-long relationship with Persistent Surveillance Systems now.

“The fact that they could not be trusted to tell the truth about the most basic facts with regard to this program reinforces why giving the government the power to watch an entire city and record its activities is an inherently irresponsible thing to do,” said David Rocah, senior staff attorney with the American Civil Liberties Union of Maryland.

“Trust has to be earned,” said Rocah, whose organization called on the city to immediately halt the surveillance program.

The ACLU and other privacy rights advocates, along with some state and local lawmakers, have objected to the surveillance, especially because of the way it was kept hidden from the public. 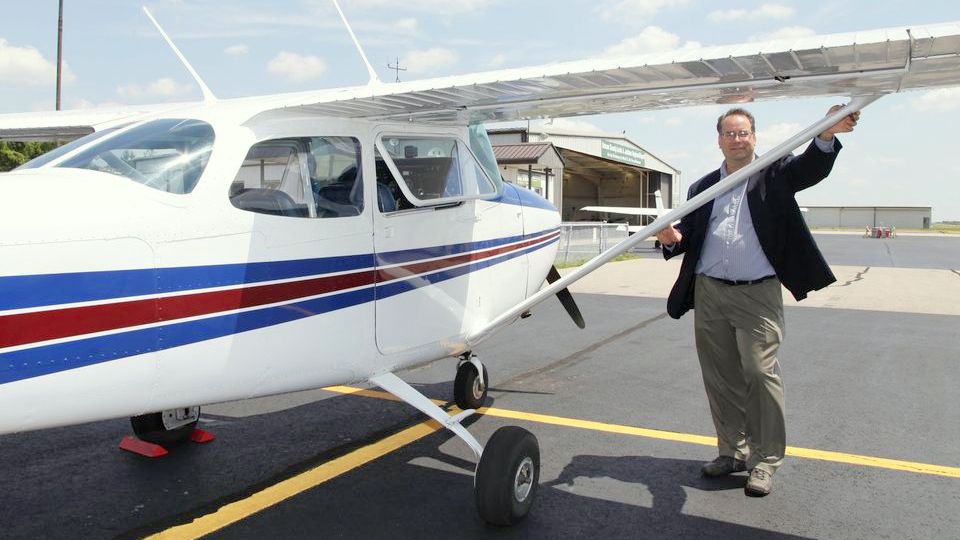 Ross McNutt first developed his wide-angle surveillance system for use in Iraq. (daytondailynews.com)

Funded by a Houston couple, the surveillance program was never subjected to the public scrutiny it would have received as a spending item before the city’s Board of Estimates.

Instead the Laura and John Arnold Foundation’s $360,000 expenditure was passed through the local Baltimore Community Foundation.

Some, including Mayor Stephanie Rawlings-Blake, have urged the public to be open-minded about the potential for the surveillance program to help a violence-plagued city catch criminals and deter crime.

It already has been used to help police identify a individuals charged in crimes, police said.

Maryland Public Defender Paul B. DeWolfe’s office, meanwhile, has said police and prosecutors had an obligation to disclose that information.

State lawmakers and the ACLU plan to draft legislation to regulate government surveillance in Maryland and require public disclosure.

Rocah said he hopes the City Council never decides to employ it.

Reporters have pressed city officials to disclose when they became aware of the surveillance flights and received widely different answers.

Apparently a member of the city State’s Attorney’s Office was briefed about the program on August 12.

“Recently” is all Mayor Stephanie Rawlings-Blake’s spokesman Anthony McCarthy has said on her behalf, when asked when she learned about it.

Determining who in city government knew about the 2008 surveillance flights may not be possible given the length of time that has transpired.

But the fact that Persistent Surveillance was flying its cameras over Baltimore well before January 2016 was not hard to figure out. 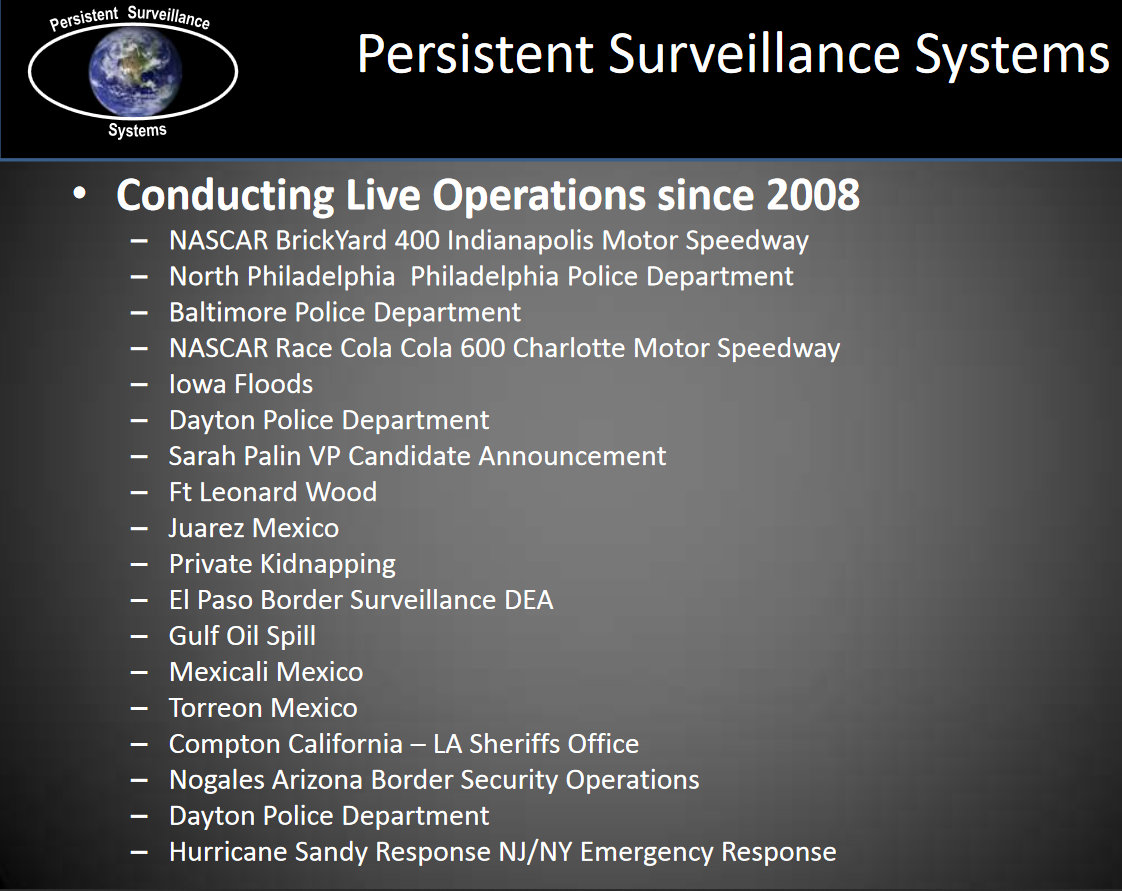 From a January 2014 presentation by Persistent Surveillance Systems. (info.publicintelligence.net)

A February 5, 2014 Washington Post feature on McNutt and his company noted that his company’s camera-equipped planes had already circled above Baltimore and a number of other cities.

“They’ve been flown above Baltimore; Philadelphia; Compton, Calif.; and Dayton in demonstrations for police,” the Post reported.

A company presentation made in January 2014 included Baltimore on a list of clients who have used Persistent Surveillance.

The graphics from this presentation are archived by  a collaborative research project called Public Intelligence dedicated to guaranteeing the public’s access to information.

They can also be found on Persistent Surveillance Systems’ website. 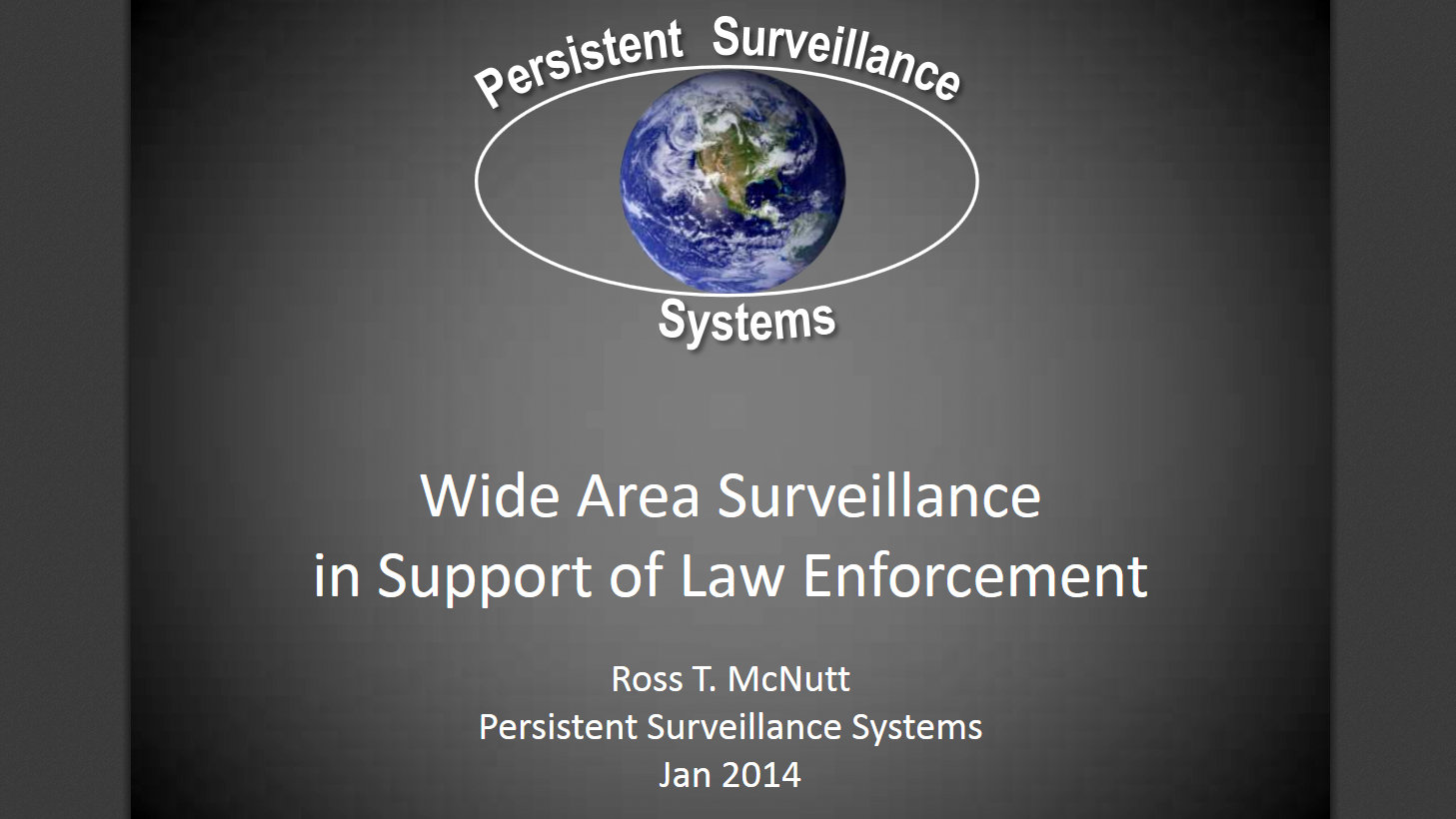 Presentation by the founder of Persistent Surveillance Systems in 2014 that mentions surveillance conducted in Baltimore.