The candidate was wearing those well-polished, brown-leather wingtips again, causing his fiancé Shani Phelan to sigh and roll her eyes.

“I try to get him to wear more comfortable shoes, but he just insists on those things,” Phelan said, as Joshua S. Harris stepped out of his pickup truck with its blue-and-green “Harris for Mayor” signs and strode over to begin another day of canvassing.

For months, Harris has been crisscrossing the city in that footwear, which he slips on over green socks meant to show his affiliation with the Green Party.

Harris, the Greens’ first ever candidate for mayor, is looking for any advantage he can find.

In a city where the political landscape is barely binary – Democrats outnumber Republicans by more than 10 to 1 and there hasn’t been a Republican mayor in 50 years – this third-party candidate has some explaining to do.

On a Saturday afternoon last month, when his knocking brought a startled-looking man to the door of a small brick house in Mt. Washington, Harris introduced himself this way: 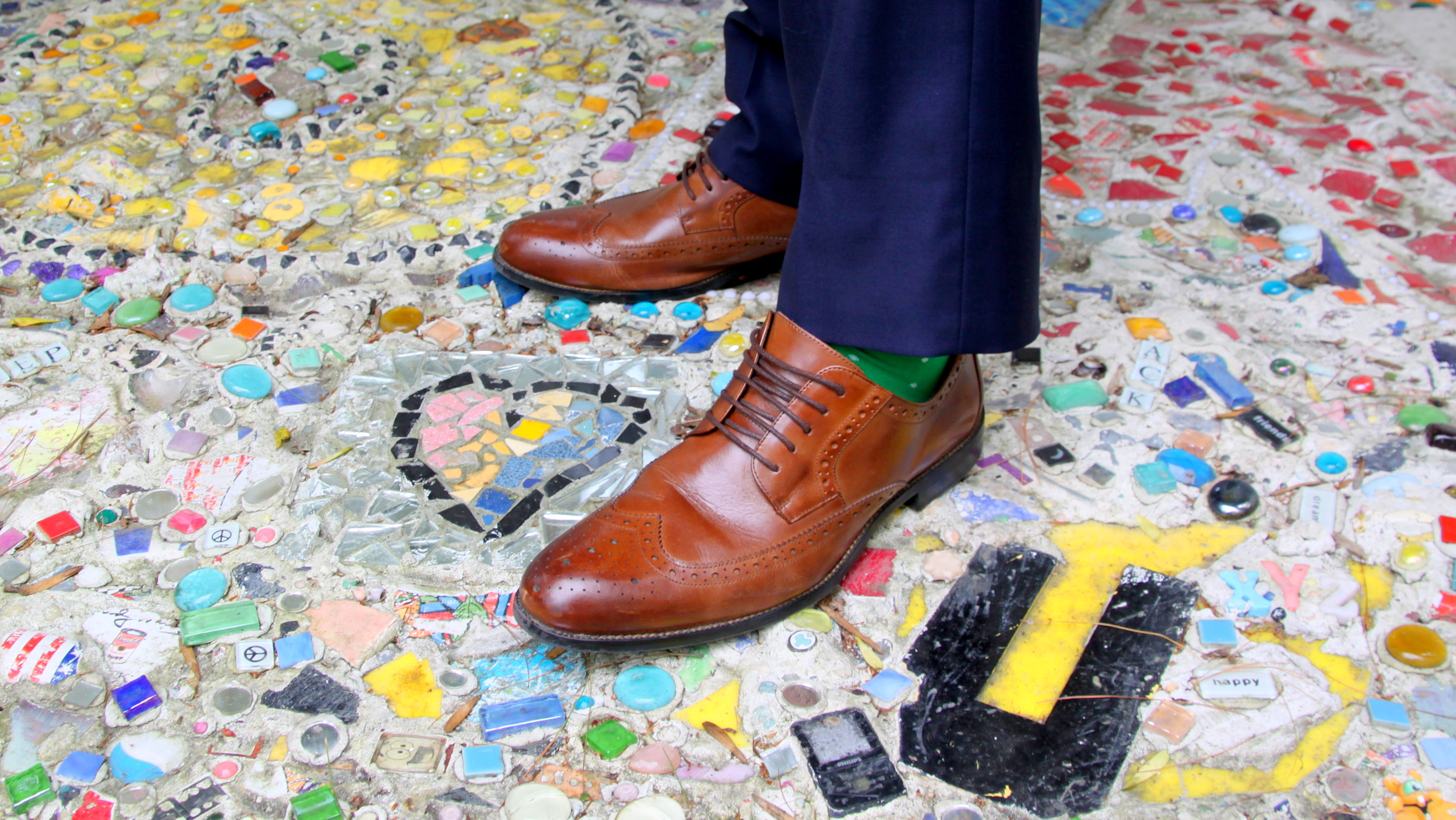 “I’m just stopping by to let you know that you have options,” Harris continued. “I’m not running as a Democrat or a Republican. No blue. No red. I think that we should run on policy and solutions.”

After a pause, the man said, “I think so, too.” He promised to read Harris website and accepted some literature.

Over the last year, Harris’ campaign has knocked on over 8,000 doors and has turned up at grassroots events from a meeting of Poe Homes residents to protest corporate tax subsidies to a community zoning meeting in booming Hampden.

Asked why he thinks he has a chance as the General Election nears, Harris said he thinks citizens in Democrat-dominated Baltimore have lost faith in party affiliation.

“What they want is quality of life and efficiency,” he said. “They want the trash picked up. They’d like to see their taxes be used better. They just want things to work.”

But Harris faces long odds. The Democratic nominee for mayor, Sen. Catherine E. Pugh, is a career politician with a resume that bristles with bullet-points: Senate Majority Leader, founder of the Baltimore Running Festival, president of the National Black Caucus of State Legislators, trustee for the University of Maryland Medical System, etc.

During the latest campaign filing period, from August to October 2016, Pugh raised $255,000 and had $429,000 on hand, according to Maryland Elections Board records.

By comparison, Harris has pennies in his campaign coffers.

Pugh opted not to attend a live WYPR radio debate and failed to provide an explanation for her absence to moderator Tom Hall. (She later told Hall she was in West Virginia helping her sister deal with “complications from a medical procedure to treat cancer.”)

• Create a public bank that would free Baltimore “from the economic grip of Wall Street.” The bank, administered by professionals, would collect all city revenues including property taxes, parking fees and personal taxes, and invest those funds in low-interest loans to homeowners, worker cooperatives and new technology such as solar energy.

• Push for living-wage jobs and job creation. Harris does not specify any minimum hourly wage rate in his campaign literature.

• Gradually lower property taxes. Harris would initially follow Mayor Stephanie Rawlings-Blake’s goal of cutting property taxes by 20 cents by 2020. (So far, the property rate has been reduced by 14 cents.)

• Rebuild vacant houses. Use loans from the public bank and establish Community Land Trusts to encourage affordable housing and a bigger tax base.

• Improve transit and bike infrastructure. Harris would “bring back the Red Line,” extend the Metro to Morgan State University, expand bike trails and the bike-share program.

A Newcomer Sees a Need

Growing up in a suburb of Chicago, Harris came to Baltimore five years ago to work in communications for Alpha Phi Alpha, the first intercollegiate African-American fraternity.

A resident of the Hollins Market neighborhood, he co-founded Hollins Creative Placemaking and has been on the boards of a number of community organizations, including the Southwest Partnership.

In February, he switched his affiliation from the Democratic Party to the Green Party, thus avoiding a crowded field of primary candidates. But his basic stump speech, which calls out city leaders for “Republican-type policies,” has changed little. 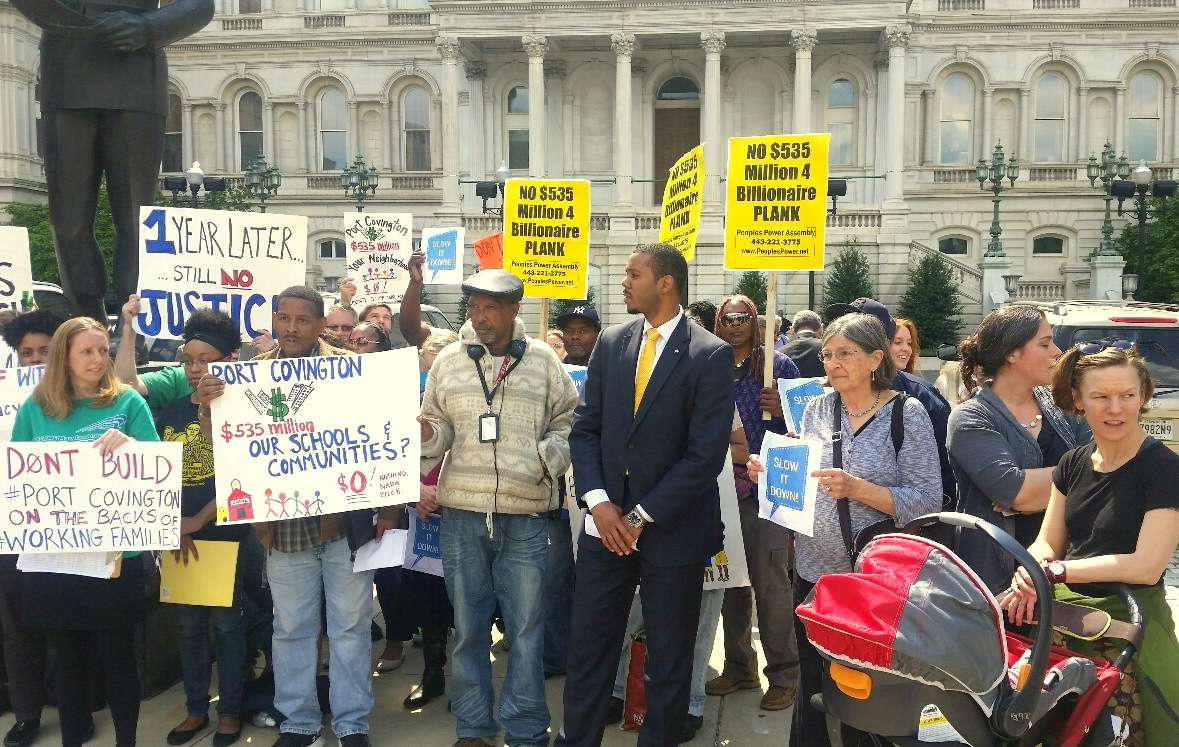 Harris stands with demonstrators in front of City Hall last May during a protest of a TIF tax subsidy – later enacted by the City Council – for Kevin Plank’s Port Covington office and housing project. (Mark Reutter)

“Understanding what that’s done to the neighborhoods and to Baltimore as a whole in perpetuating poverty, racial segregation and disparity in the city where red-lining was invented and knowing that it exists today,” Harris said, has made him wary of the Democratic Party.

The Root Cause of Crime

On his walk through Mt. Washington, one of the people Harris met spoke with him at length about his concerns. Crime was at the top of the list.

“In the last month, we’ve had a lot of robberies. Mainly home-break-ins. And people getting robbed on the street,” Paul Turner said, noting that some kids in the area were recently confronted by five people who jumped out a car, robbed them of their cellphones at gunpoint, then sped off.

A break-in at his house six months ago – something Turner said hasn’t happened in 26 years of living there – prompted him to get an alarm system.

“So crime is a big issue,” Turner said. “I think it’s an issue for the whole city, the whole region.”

Harris said the root cause of crime is lack of jobs (“We’re a blue-collar city without blue-collar jobs”) and described his plan to promote “green jobs” in clean energy manufacturing and the emerging legal cannabis industry.

“My plan will create thousands of jobs in Baltimore. Jobs that don’t require a college degree, but are going to pay a living wage,” he said.

Turner listened, then segued to the topic of taxes. “Of course, taxes are as high as ever,” he told Harris.

To that remark, the candidate described the public bank that is at the center of his economic development plan. 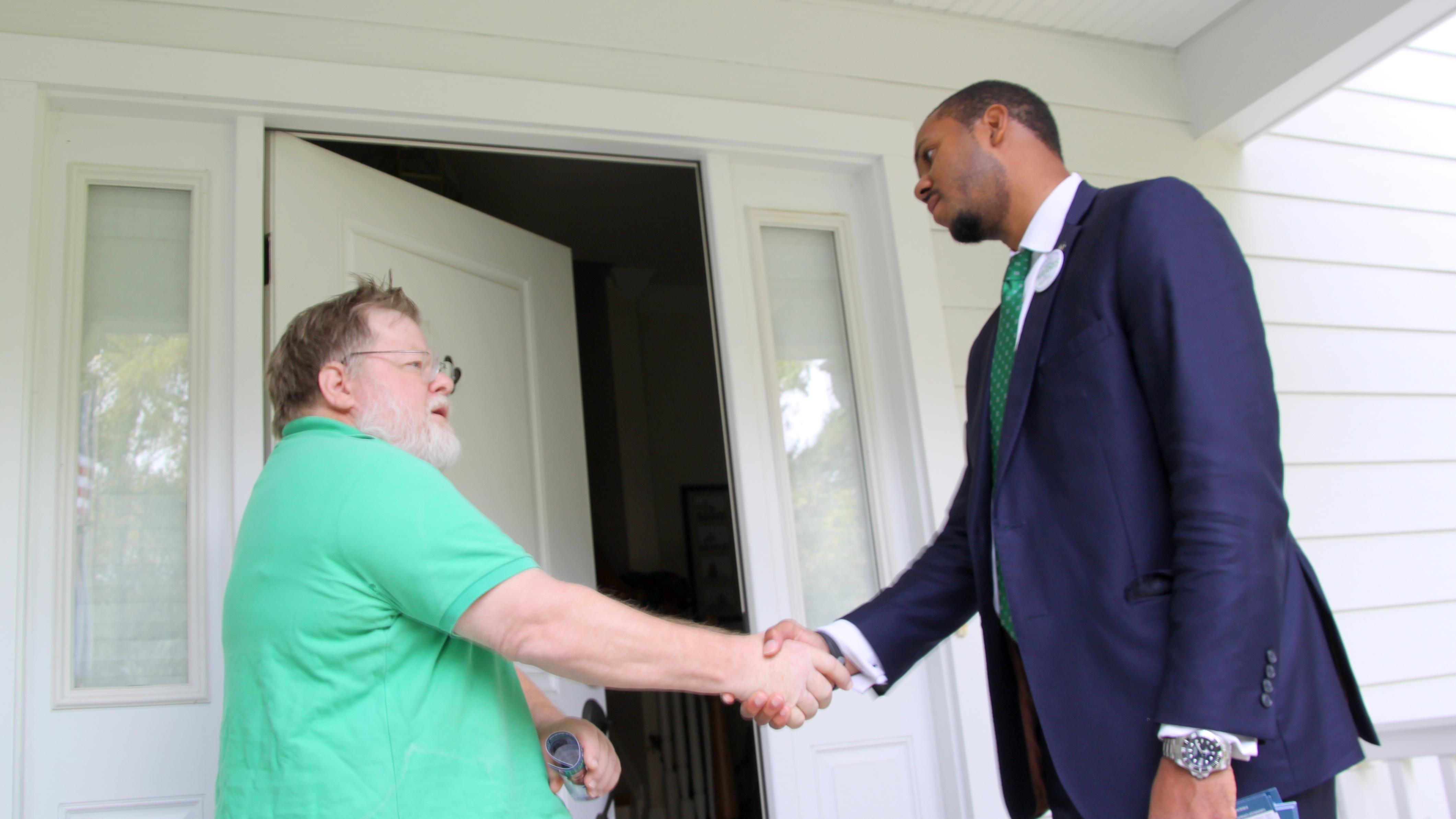 “Yes! I have a plan that’s going to allow us to cut taxes, streamline city government, audit those un-audited agencies wasting taxpayers’ money and generate revenue that’s going to let us really lift up the whole city,” he concluded.

The man listened and then Harris trailed off, sensing perhaps it might be enough policy talk for a Sunday afternoon.

“We’ll leave you to your stogie,” he told Turner, who wore an Under Armour shirt, a House of Cards hat and had been smoking a cigar on his porch when approached by the candidate and a reporter.

“Read the 21-page economic plan on my website when you get a minute,” Harris said.

“Oh, I will research you,” Turner assured him.