Colette Aroh, a 20-year-old Johns Hopkins University junior who came to the U.S. from Nigeria at age four, was one of the 2,000 people packed into Shriver Hall last night to hear Vermont Senator Bernie Sanders speak.

“I’m really passionate about what Bernie stands for,” she said.

She tried to explain why before the start of the address by Sanders, who lost to Hillary Clinton in the Democratic primary but inspired millions.

Raised in Baltimore County, Aroh said she watched the challenges faced by her surgeon father and accountant mother whose professional qualifications were not recognized in the U.S., leading to her dad to working as a nurse and her mom for a time as a cashier. (She has since switched careers to nursing as well and is an RN.)

“Seeing my mother deal with peoples’ assumptions and the racism she encountered being a woman of color in that job was eye-opening,” said Aroh, who said she had her own dispiriting encounters with bias as a black student attending mostly-white suburban schools.

Like many immigrants, Aroh said her family came to the U.S. thinking that it was a land of opportunity, a meritocracy.

“To find the reality is more about who you know, that there’s racism, was really unsettling,” she said. “The idea that no matter how hard you work, you’d have to work so much harder to make up for all that.”

“He understands the fundamental things wrong with the system that need to be fixed before we can change all that,” said Aroh, a behavioral biology major planning to go to medical school. (Her parents, she noted, are working to get certified to work in the U.S. in their original professions.)

So did the senator’s 45-minute speech, the final installment in this fall’s Milton S. Eisenhower Symposium series, deliver what Aroh came for?

Towards the end of her live-tweeting of the Sanders event, she provided the answer clearly.

Sanders’ talk, co-sponsored with the Johns Hopkins Foreign Affairs Symposium, had been scheduled before the election of Republican nominee Donald Trump on November 8 rocked the nation.

There weren’t a lot of references by Sanders to the meaning of Trump’s victory or the fears among women, minorities or immigrants stoked by the Republican nominee’s remarks, campaign promises and rumored cabinet appointments.

“It was clear that millions of people in rural America felt that their needs were not being listened to by Democrats and they voted for Mr. Trump,” he said at one point. “It’s time for all of us to attempt to figure out how we can re-build rural America.” 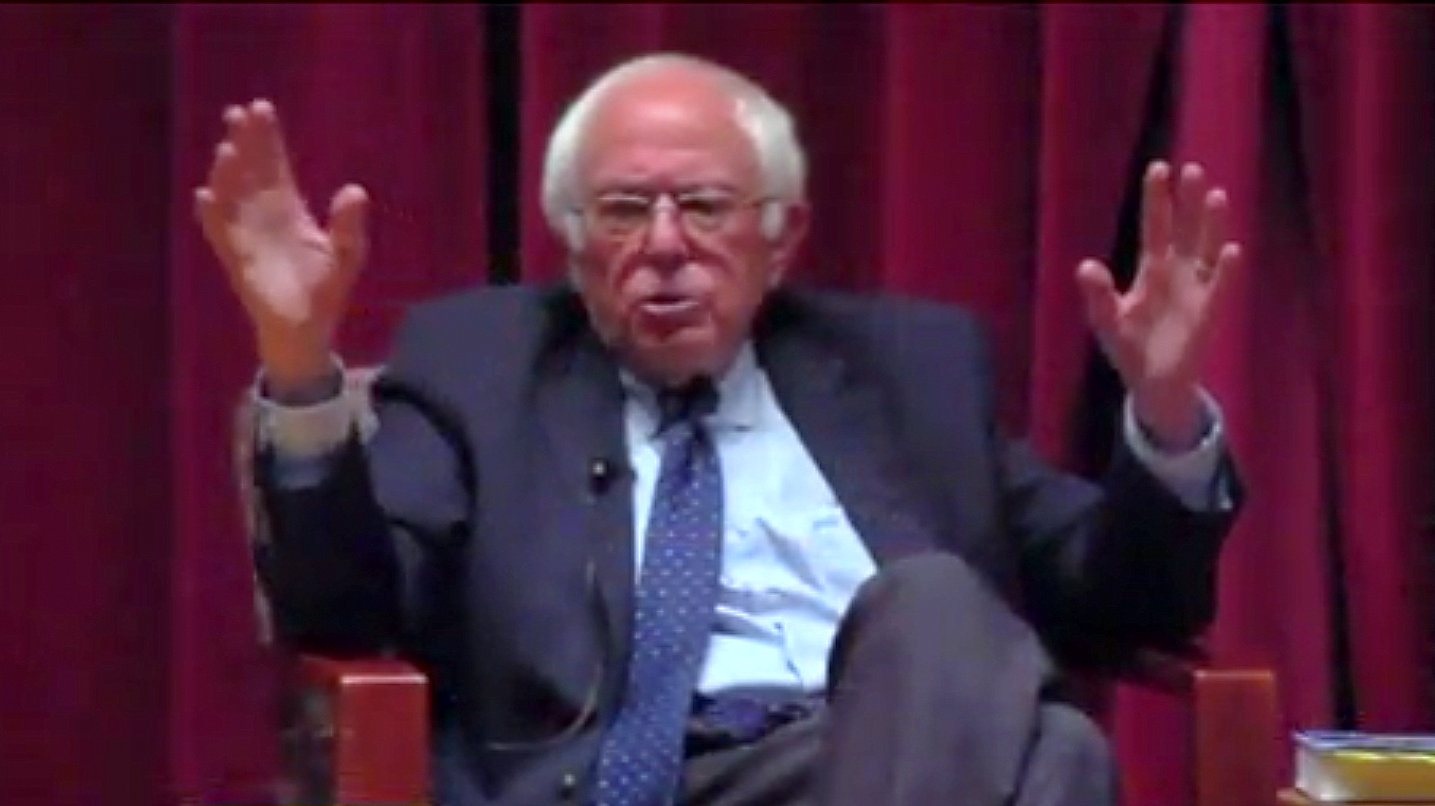 During a question-and-answer period at the end, Sanders was asked whether his own views helped to create “polarization” in American political discourse.

“I disagree with the basic point of that question. I do not believe we are so divided,” he replied, saying the idea is promoted by “the media and the billionaire class.”

Sanders urged listeners discouraged after the election to come together and call for change.

“Real change never comes from the top down,” he said, to applause. Urging students to march in the streets for reform, he added, “The politicians would look out the window and say, ‘Oh my god, here they come.’”

Sanders argued that there is broad agreement across the political spectrum on the need to increase the minimum wage, achieve pay equity for women, help students avoid onerous college tuition and debt, and other “economic issues.”

Though Americans disagree on how immigration should be reformed, he said, “relatively few agree with Mr. Trump that . . . we need to sweep the streets.”

Sanders’ reassurances aside, Aroh and other students listening to the talk said at the outset they were worried about whether Trump will make good on his vow, renewed after his election, to deport non-citizens who have committed crimes.

“Two of my suite mates, one is from Vietnam and the other from China, were on the phone with their parents the morning after the election,” Arpornsuksant said. “They were really worried. You could hear it in their voices.”

Anita Louie, also 19 and a sophomore, noted that Hopkins students are participating in the Sanctuary Campus Movement to declare their school grounds a safe space for undocumented immigrants.

On Wednesday, students staged a walk-out from classes to support it.

It’s an issue that has also touched Aroh, who struggles to understand anti-immigrant sentiment even as she has been personally confronted by it.

“I know friends, white middle-class kids, lower-class kids, who say ‘Oh, those immigrants are going to take my job!’” she said.

“A lot of people felt unheard and chose the candidate that made them feel heard,” she said, reflecting on the election with a grimace. “But those ideas they express are so hurtful to me.”

She said she has appreciated the greater diversity at Hopkins, but even there felt at times misunderstood or demeaned.

“Trump’s election was very painful, but it wasn’t like a new pain,” she said. “This is what it means to be an immigrant, to be a black woman. Even your grieving is disrespected. People say ‘Just unify. Get over it.’”

The specter of an immigrant round-up may not directly touch Aroh and her family members who are citizens, but it does potentially affect her grandmother.

Here are Colette Aroh’s tweets from the Bernie Sanders event. To read them chronologically, start from the bottom. 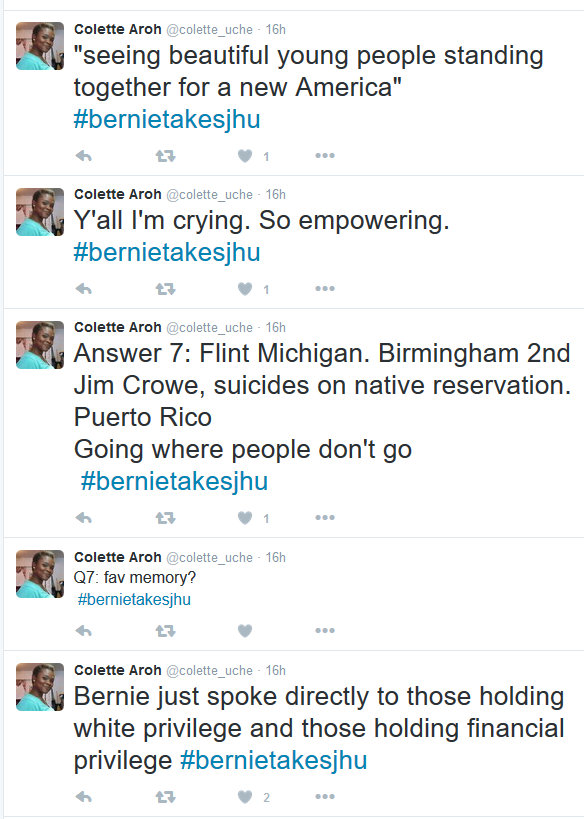 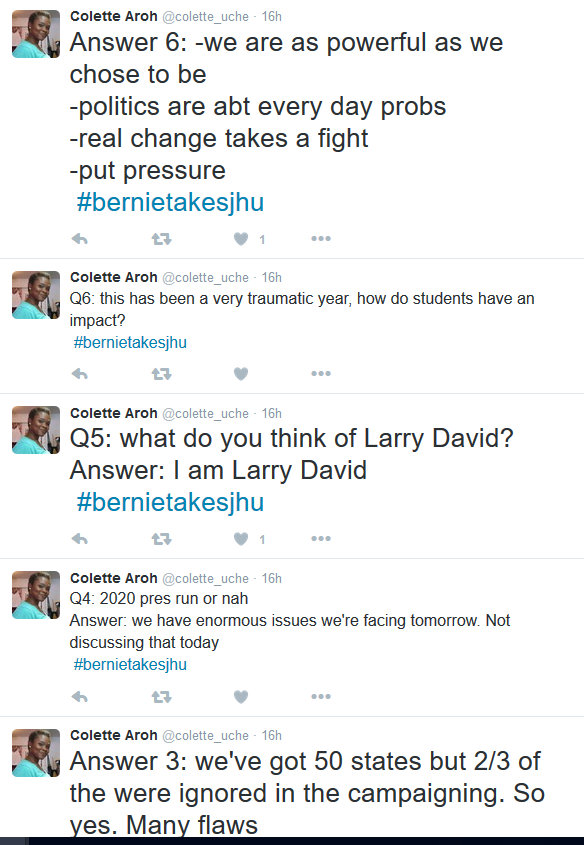 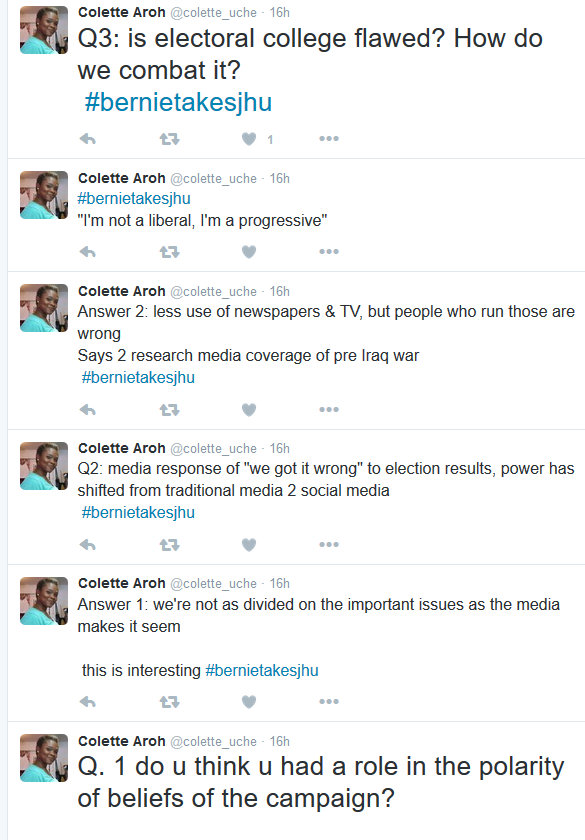 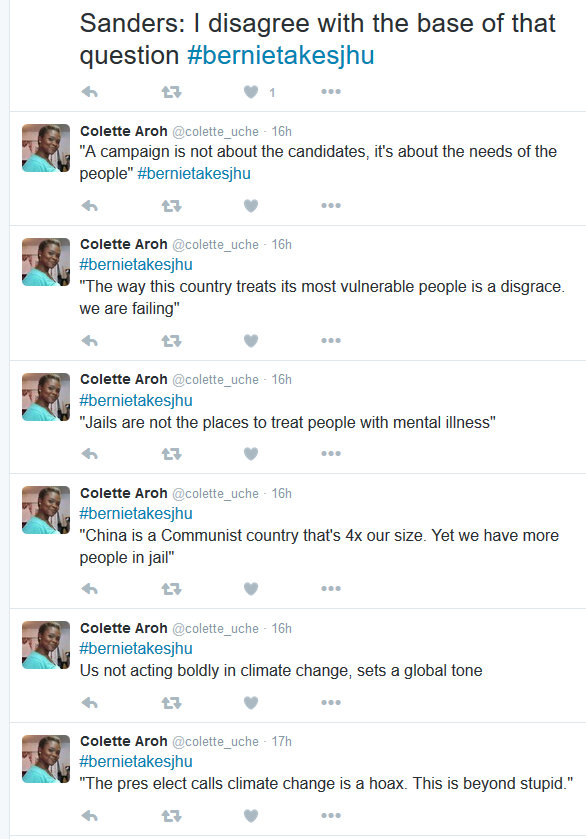 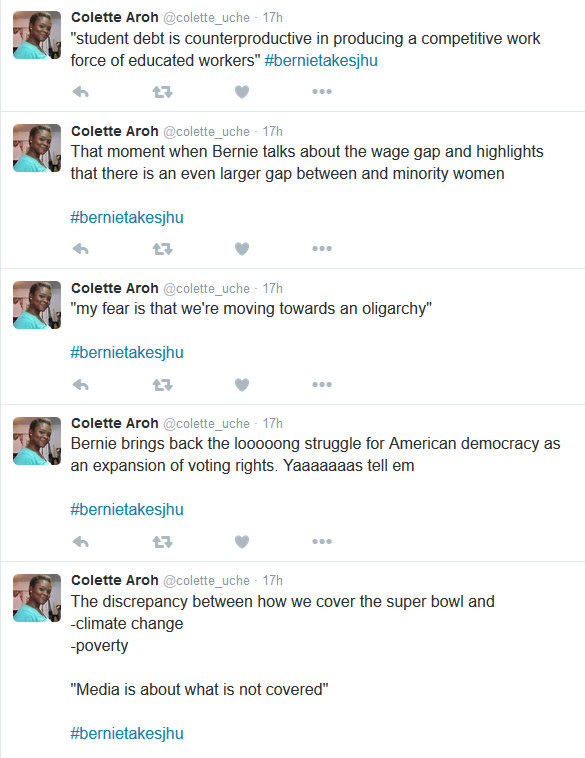 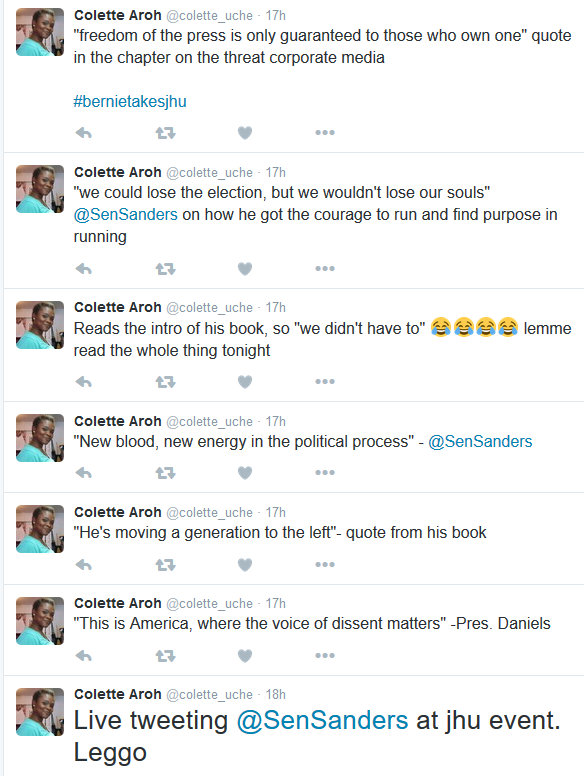