In 1983, Nathaniel Foster was a 17-year-old high school graduate from Baltimore with no prior criminal record, preparing to enroll in college.

Then he participated in a botched robbery attempt in which a person died, leading to a conviction and a mandatory life sentence.

Now 50-years-old and still in prison – and with a clean record over three-plus decades of incarceration and “stellar reviews” from his supervisors – Foster is a plaintiff in a lawsuit challenging Maryland’s parole system for juveniles with life sentences.

More than 200 individuals in the state are serving parole-eligible life sentences for crimes committed when they were juveniles. In practice they are likely to never be given a fair chance to receive parole in violation of their constitutional rights, the American Civil Liberties Union of Maryland argues, in a complaint filed last year.

“For decades, Maryland has denied any hope of release to juvenile lifers who have matured, who have done everything within their power to reform and to demonstrate their rehabilitation, and who the Constitution says deserve a second chance at life outside prison walls,” the ACLU attorneys said, in a statement released when the suit was filed in April.

The complaint, the subject of a hearing scheduled today in U.S. District Court in Baltimore, was filed on behalf of the Maryland Restorative Justice Initiative, a prisoners’ rights organization that includes similar life-sentenced parole-eligible juveniles and their families.

Named as plaintiffs along with Foster are two other individuals subjected to mandatory life sentences for offenses committed decades ago when they were teens.

No “Lifer” Paroled in 20 Years

Today’s hearing is to consider the state’s motion to throw out the case on the grounds that changes made in October address issues in the complaint. Hearings on 300 juvenile lifers’ cases have been scheduled, the state argues, in motions on file in the case.

Naming Gov. Larry Hogan and corrections officials as defendants, the complaint points to U.S. Supreme Court decisions that have found that mandatory life-without-parole sentences for juveniles are in almost all cases unconstitutional. The Court has recognized new findings that the adolescent brain and personality are undeveloped, leaving juveniles susceptible to outside influence and rash actions.

Maryland does not have mandatory life-without-parole sentences, but the complaint argues that they do, in effect, because the parole system has no meaningful opportunity for release.

“Maryland’s current practices all but guarantee that juveniles sentenced to life — even those with a theoretical opportunity for parole — will die in prison no matter how thoroughly they have been reformed, all without adequate consideration of their youth status,” the lawsuit says.

According to the suit, no “juvenile lifer” in Maryland has been paroled in the last 20 years, a trend that began in 1995 when Governor Parris Glendening took office and said he wouldn’t give parole to anyone with a life sentence. 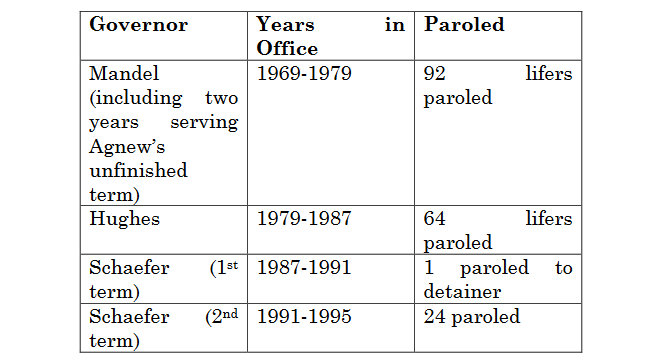 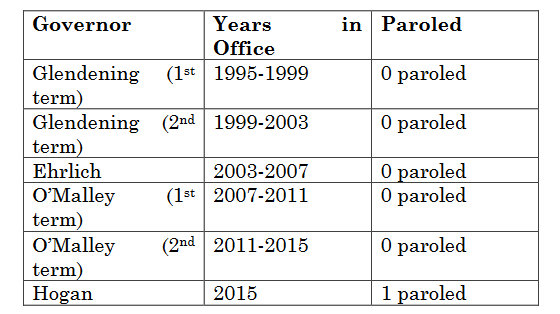 Only two other states use this system in which the governor has final say on parole recommendation for life-sentenced inmates.

This rule, “has politicized parole, entrenched barriers to release, and deprived deserving individuals of meaningful consideration for release,” the ACLU said in April.

The 61-page complaint tells inmate Foster’s story in detail – the series of jobs he has held including currently in the prison sheet metal shop, volunteering to help inmates who are terminally ill, getting on the Dean’s List for high grades in an academic program offered by Coppin State University. (He was unable to finish this degree before funding for the program was cut, just twenty-four credits short of completion.)

It also recounts his six parole hearings in 20 years.

“Despite his longstanding and extraordinary track record, as a result of Maryland’s dysfunctional parole scheme, Mr. Foster has never been recommended for parole,” his lawyers noted in April. He remains in medium security status at the Maryland Correctional Institution in Hagerstown.

In a statement the attorneys released, Foster’s aunt, Brenda Allen, a former parole officer, talked about the family’s frustration.

“I helped raise Nathaniel and now I feel so powerless, because it seems like he’s never going to get out,” Allen said.

“He has worked so hard. I wish people would look at the kinds of things he’s accomplished. I don’t know what else Nathaniel can do to prove he’s ready to return to society. I’m sorry for what happened. But he was just a kid himself.”