Baltimore City has agreed to pay $300,000 to the family of Anthony Anderson, the East Baltimore man whose 2012 death became a focal point of the issue of police brutality well before the Freddie Gray case exploded in demonstrations and a riot.

The Board of Estimates has placed the settlement, the biggest since the Gray settlement in 2015, on the agenda for approval at its Wednesday meeting.

The settlement will release the city from a $20 million wrongful death case filed by Anderson’s family in federal court against the Police Department and three detectives in the now-disbanded Violent Crime Impact Section.

The suit was filed after then-State’s Attorney Gregg L. Bernstein exonerated the three plainclothes detectives, who he said followed proper police procedure when they arrested Anderson in a vacant lot at Montford Avenue and Biddle Street on the night of September 21, 2012.

Bernstein’s ruling infuriated many in the black community and helped lead to the surprise challenge – and even more surprising election victory – of Marilyn J. Mosby, the current state’s attorney, in 2014.

For activists, Anthony Anderson’s name was, along with those of Tyrone West, Freddie gray, George King and others, part of their rallying cry about a pattern of excessive use of force by Baltimore police, and other issues.

At issue in Anderson’s death was the use of a “bear hug” tackle by Officer Todd A. Strohman in the vacant lot after officers suspected Anderson of carrying drugs upon leaving a corner liquor store.

The bear hug broke eight of Anderson’s ribs and ruptured his spleen, causing internal bleeding that, combined with a pre-existing medical condition, led to the 46-year-old’s death.

The arrest was witnessed by Anderson’s mother, daughter and son, who charged in their federal lawsuit that Strohman and Officers Gregg B. Boyd and Michael J. Vodarick “repeatedly kick[ed] Anderson in the ribs, stomach, back and chest for several minutes maliciously and sadistically for the very purpose of causing harm.” 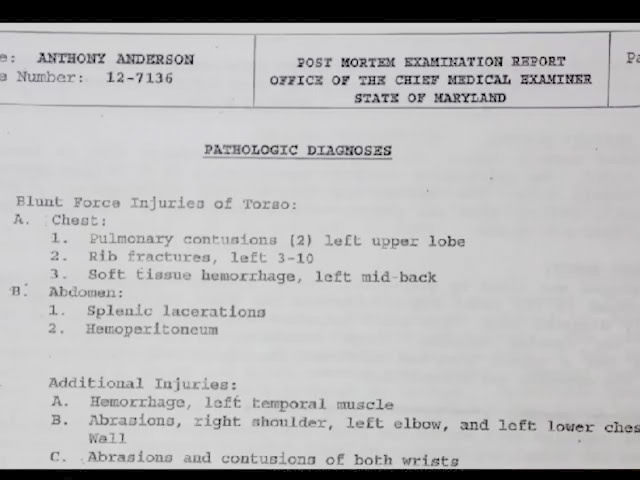 The pathologist’s report on Anthony Anderson found blunt force trauma the primary cause of death.

In their account, the officers said that Anderson had been carrying baggies of heroin and swallowed several gel caps after they ordered him to stop.

They said they believed his noticeable physical distress – he slumped over while in handcuffs and struggled to breath – was due to a drug overdose.

By the time paramedics arrived, Anderson was unconscious. He was revived after paramedics gave him Narcan, a drug that counteracts a drug overdose, but he quickly slipped back to unconsciousness in the ambulance.

He died a few minutes later at Johns Hopkins Hospital.

Bernstein, however, said that further investigation showed that Anderson was susceptible to internal bleeding because of a liver ailment, which limited his ability to clot blood, so he bled more than normal.

Bernstein also said there were no marks on Anderson’s body that suggested kicking or rough treatment. by police.

Still on the Force

Officers Boyd, Strohman and Vodarick remain on the police force. According to online records, each of the officers was paid between $105,000 and $112,000 last year.

In its report to Mayor Catherine Pugh and the Board of Estimates, the city law department said it recommends approval of the large settlement – most police brutality cases, even some wrongful deaths, are settled for less than $100,000 – “because of conflicting factual issues and given the uncertainties and unpredictability of jury verdicts.”

In return, the Anderson family will end their federal lawsuit.

Such city settlements routinely stipulate that plaintiffs will face the potential loss of settlement proceeds if they discuss the settlement, or the underlying facts of the case, with members of the media. 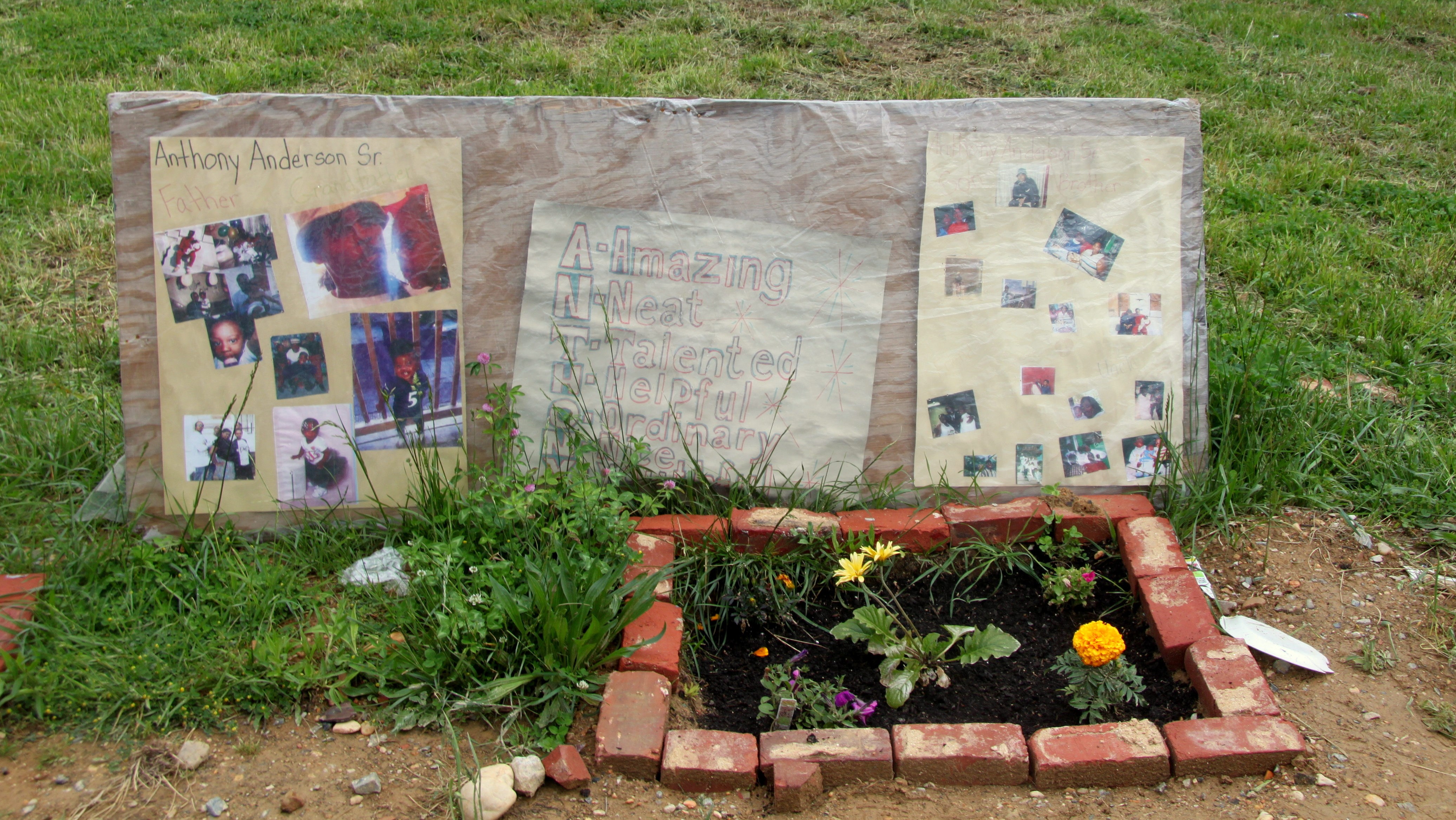 A memorial to Anthony Anderson at Montford and Biddle streets, near where Baltimore police tackled him. (2013 photo by Louie Krauss)