In 2015 under the last mayor, Baltimore evicted people living in tents under the Route 40 overpass at Martin Luther King Jr. Blvd. and fenced off the area to keep them from coming back.

Tomorrow morning under a new mayor, the city is again set to clear and fence off a homeless persons’ encampment – this one springing up just a few hundred yards south and west of the last one.

Service providers and advocates, who say the city informed them of its plans less than a week ago, are upset.

“What’s the rush? Why does this have to happen now, and why once again without the full engagement of the service provider community?” said Antonia K. Fasanelli, executive director of the Homeless Persons Representation Project. 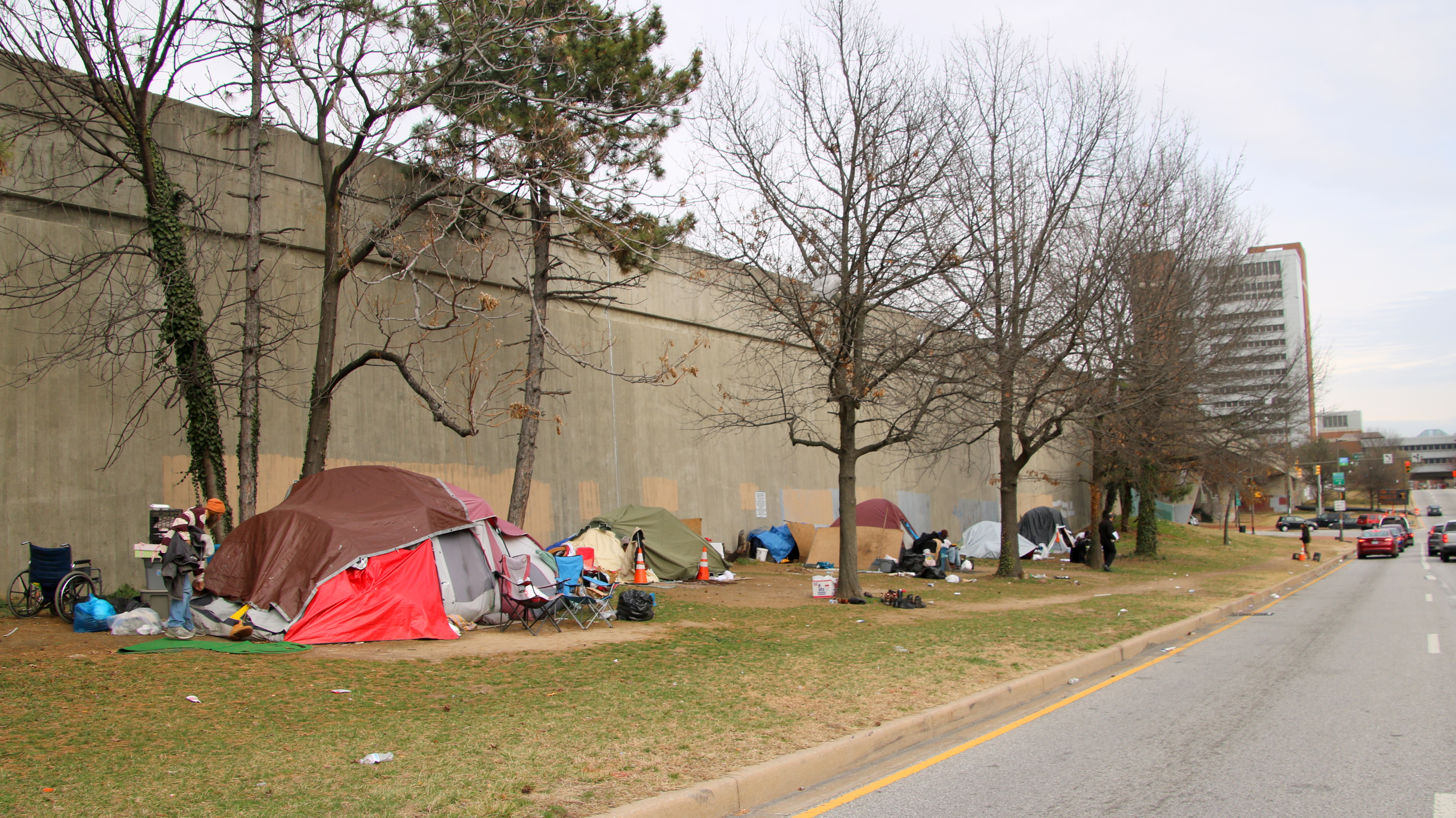 The homeless camp along Route 40 and Mulberry Street just west of Martin Luther King Jr. Blvd. has been targeted for removal. (Fern Shen)

Pointing to the nearby Heritage Crossing neighborhood, one of the people living in the tents, James Johnson, said, “The people over there complained, we were told.”

The news of tomorrow’s planned camp-clearing came to the advocates and the Continuum of Care board by way of a February 24 email from Terry Hickey, acting director of the Mayor’s Office of Human Services.

“In order to address longstanding, significant safety and sanitary conditions approximate to the Heritage Crossing neighborhood located near MLK and Rt. 40, the City plans to clear the existing encampment, clean the area and erect permanent fencing,” Hickey wrote.

Asked to provide more detail about the decision, Hickey did not say what the safety and sanitary concerns are.

“The city has worked extensively with community and business leaders to keep the area clean and free from criminal activity,” he wrote in an email to The Brew, noting that city outreach workers had been visiting the encampment.

“However, it has been determined that permanently fencing the area and engaging with the homeless individuals in a safer setting is the only way to ensure safety and health concerns are addressed,” his email said.

Earlier this week,  deputy director for homeless services, Chris Rafferty, was at the encampment asking tent-dwellers to fill out information forms needed before their temporary placement at an area hotel. Johnson, who was sitting on a camp chair outside his tent, studied the paper.

“I don’t know what’s going to happen after the motel,” said the 54-year-old, who has been living in the encampment for a little over a year. Hickey’s email had said the Mayor’s Office of Human Services would “coordinate with service providers to connect these individuals to case management, services and ultimately — permanent housing.”

Since Catherine Pugh became mayor in December, city officials dealing with the homeless “have been more open and willing to hear from providers,” Fasanelli said.

“But we are very disappointed that the city has chosen the forced destruction of an encampment as its very first step involving people who experience homelessness,” she added.

Advocates have been pressing the new administration for a statement spelling out its affordable housing goals, but have yet to receive one.

“Homeless people are all over the city. What are they planning to do, fence all of them out?” Fasanelli said. “Clearing people out should be a last resort.” 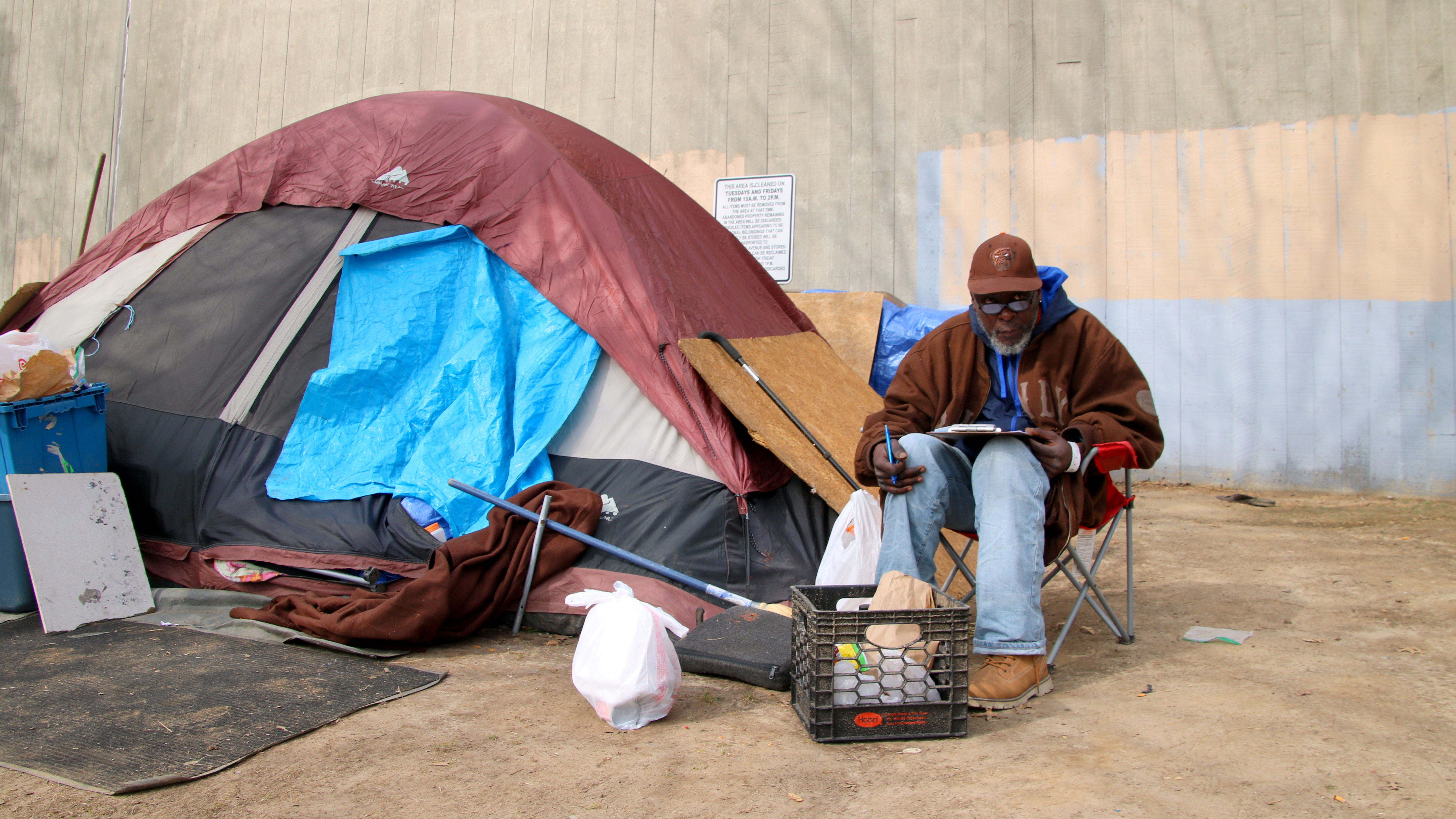 James Johnson reviews some forms that a city homeless official asked him to sign. (Fern Shen)

On the specific issue of the camp clearing, Fasanelli said the city’s approach does not follow the U.S. Inter-Agency Council’s guidelines for how best to deal with encampments.

“This process requires much more engagement and work with service providers,” she said.

“There’s a level of anxiety that folks who live in the encampment feel that may cause them to detach from the providers,” Fasanelli said. “We lose people when it’s done this way.”

She pointed to an encampment situation 10 years ago at Guilford and Bath streets that was handled differently, at a time when homeless services came under the Health Department’s purview and Joshua Sharfstein was the commissioner.

“They brought key providers into a room,” she said, “and they worked together to put a plan in place that was very comprehensive and humane.”

A Rake and Broom

As cars exiting Route 40 whizzed by, Johnson talked about all that led up to the city’s planned eviction. At first, he said, the city came to clean the area twice a week. Each time residents had to move their tents across the road.

“We got so good keeping it clean they let us switch to once a week,” Johnson said, pointing to the rake and broom he uses to keep trash from accumulating.

Then they began to hear rumblings about the city’s desire to evict them (“Two different companies bidding on the fence work came to take measurements,” he said), but were told any action would wait until the new mayor took office.

As Johnson spoke, a woman pulled up in her car and dropped a bag of food off at each tent. Pairs of men’s leather boots sat under a tree at a spot where the unwritten rule is that anything is up for grabs, Johnson explained.

“Along the curb, that’s where I put the bags of trash,” Johnson said. 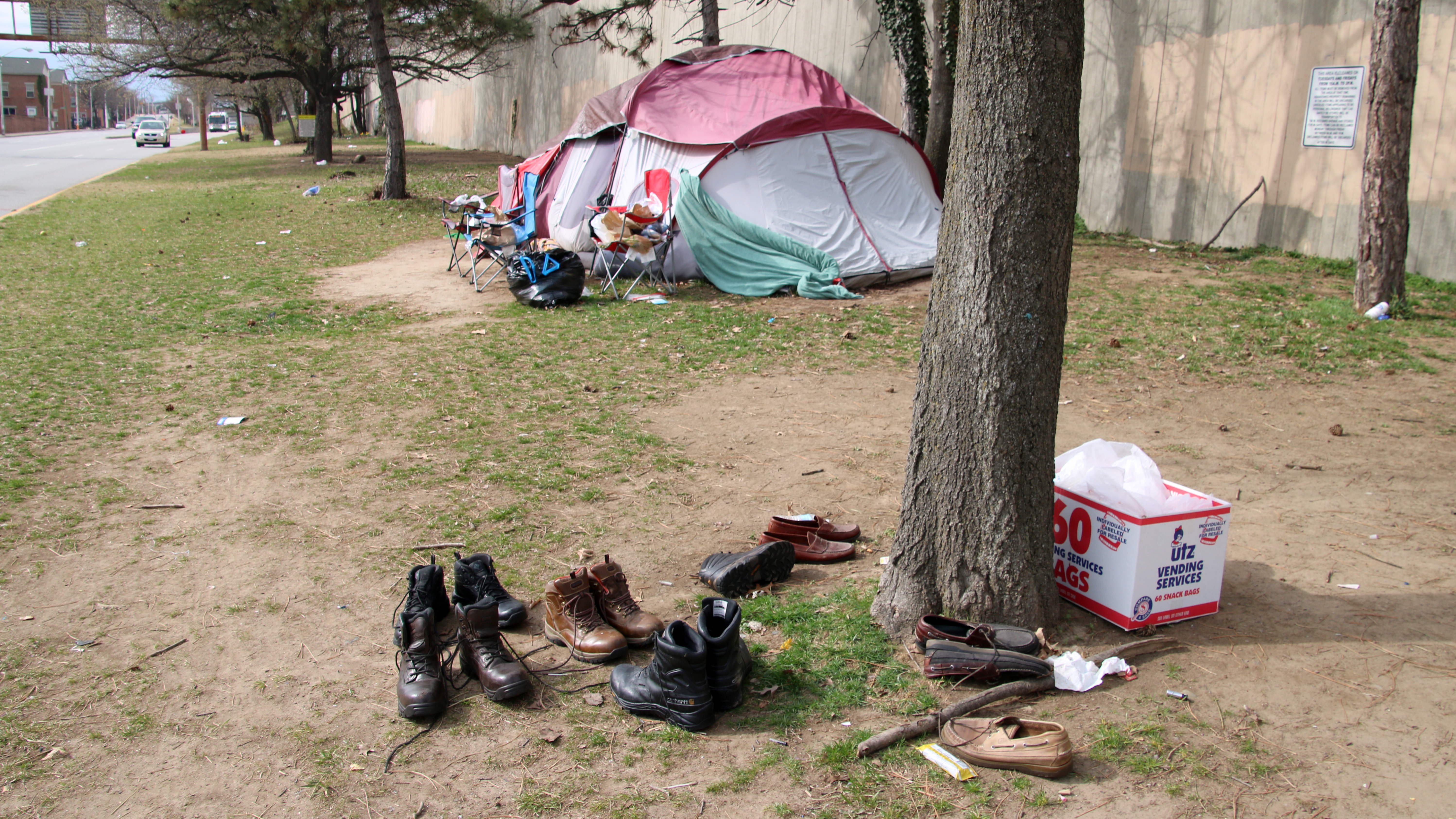 Donated boots are left by a tree for anyone’s use. (Fern Shen)

Johnson lived in the nearby MLK Boulevard encampment and, for a time, lived in a house, but was driven out by a fire that also destroyed his identification papers, he said. Asked how he came to be homeless, Johnson said a spine injury caused by an accident and other troubles have contributed.

Over the course of his life, he said that he has worked in construction, lead paint removal and as a security guard. “I’ve also worked in restaurants, in the front and in the back.”

He’s hoping to get new identification papers and find better housing, but isn’t sure how that’s going to happen.

“Meanwhile,” he said stoically, “I got to deal with it ’til things get better.”