Since taking office, Mayor Catherine Pugh has expressed concern about the bill to raise Baltimore’s minimum wage to $15 an hour by 2022, indicating she’s not sure how she’ll act on it.

Speaking to reporters yesterday, Pugh said she worries about the bill’s effect on “the people who have no job experience” and said she is taking “a holistic approach to evaluating it” and expects to make a decision “in the next few days.”

But Pugh was very clear on the measure back when she was a candidate in the 2016 primary:

She unequivocally supported it.

“I am aware of the current initiative to raise the minimum wage in the City Council to $15,” then-Senator Pugh said, in reply to a questionnaire sent to candidates by the Metropolitan Baltimore AFL-CIO.

“And when it reaches my desk,” she continued, “I will sign it.”

Her shift since then has been a mystery and a disappointment to minimum wage advocates.

“We were really surprised she has expressed all these concerns to the press, while she committed to the bill very clearly to all these different organizations back when she was a candidate,” said Ricarra Jones, chair of the Fight for $15 Baltimore Coalition.

Jones noted that as a veteran state lawmaker, Pugh is well-versed in the issue and supported the bill to establish $10.10 Maryland minimum wage in 2014.

“She was a champion of it in Annapolis,” Jones said. “She was with us.”

Pugh’s position is in the spotlight following Monday’s 11-3 city council vote approving of the $15 minimum wage, a margin that could mean veto-proof support. (Councilman Brandon Scott, a bill supporter, was reportedly away on a trip out of the country.  His vote would in theory provide the 12th vote needed to block a veto.)

Supported now by City Council President Bernard C. “Jack” Young, it is legislation that has weakened significantly since the version rejected last year by a council with a considerably different make-up.

Small businesses (those with fewer than 50 employees) get more time – until 2026 – to get their wages up to $15. Workers under 21 now are also exempted. Tipped workers are exempted now, as well.

Why is Pugh wavering on a campaign promise?

A spokesman acknowledged Pugh’s earlier support for minimum wage initiatives in the legislature and for raising Baltimore’s minimum to $15 when she was running for office. But he said she must weigh the measure differently now that she has been elected.

“Mayor Pugh has a long history of supporting increases in the minimum wage and being a champion for working families in Baltimore and as a legislator in Annapolis,” said Anthony McCarthy, the mayor’s director of public affairs.

“She answered the minimum wage question on several questionnaires and during interviews during the primary because she has that history,” McCarthy said. “Now as mayor she must be accountable for the city’s fiscal bottom line.”

“She will weigh this legislation through the prism of what she believes is in the best interests of the city,” he said.

Over the various versions of the minimum wage hike proposal over the years, debate has followed the same basic outline, with business interests saying it would drive employers out of the city and labor and justice advocates saying it would lead to increased pay for 80,000 workers and strengthen the city.

But while the rhetorical points may be familiar, that hasn’t made them, at times, any less emotional.

“I’m a child of teenage parents who worked at Wendy’s trying to make ends meet on a minimum wage much lower than the one we are talking about today,” said Councilman Kristerfer Burnett, before Monday’s vote.

“It’s heartbreaking to me that this is even a debate,” Burnett said, with a catch in his voice. 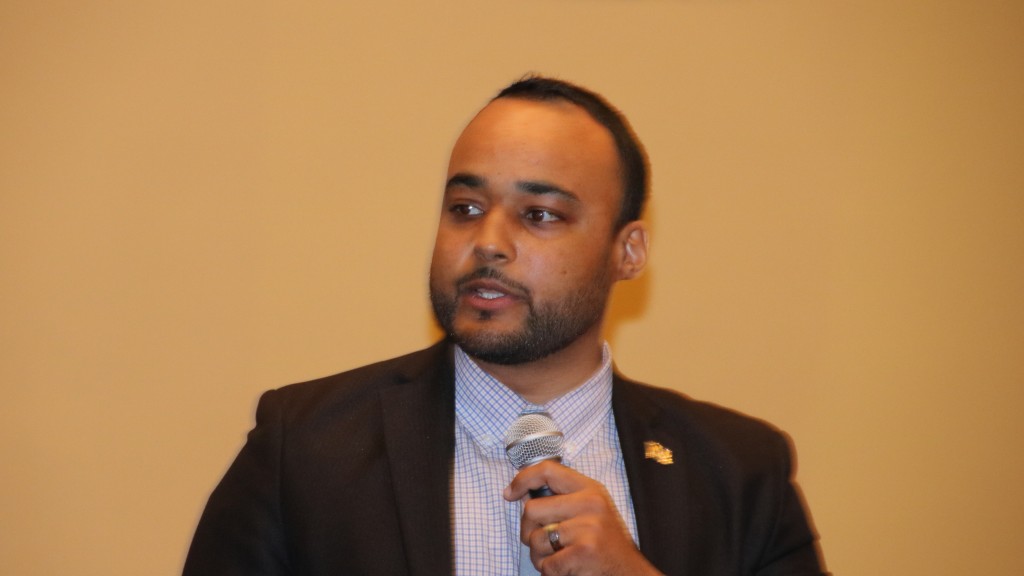 McCarthy said Pugh has spoken with all sides and “is determined not to put Baltimore at any economic disadvantage.”

He noted that the legislation comes at a time when the city is “juggling a multi-million dollar commitment for the DOJ Consent Decree, soaring overtime costs in the police department as well as an increase in the city’s contribution to the public schools to address their structural deficit.”

City finance officials have warned that the bill would cost the city more than $100 million over four years because some city workers’ wages would increase.

According to an independent analysis, advocates say, those costs would be “largely balanced by increased tax revenues and other benefits to the city, including a reduction in homelessness and increased home ownership made possible by higher wages.”

Jones said advocates are looking for Pugh to maintain her commitment to supporting working families:

“We’re hoping she does what she promised to do during the campaign.”