In an effort to stem a decade of losses – and the prospect of more red ink in the future – the Pugh administration hopes to refinance the city-owned Hilton Baltimore Hotel by taking advantage of historically low interest rates.

Under a plan approved yesterday by Mayor Catherine Pugh and the Board of Finance, the city will issue up to $330 million in new bonds, at interest rates of no more than 5.6%, to retire current bonds with up to 5.9% rates.

The lower interest rates, coupled with an expected new management agreement with Hilton Hotels and the elimination of the original bond insurer, are expected generate between $3 and $4 million in annual savings for the hotel, Steve Kraus, deputy director of finance, told the finance board yesterday.

The hotel reported a $5.2 million loss in its latest financial statement in 2015 – a stark contrast to the $7 million in profits the hotel was originally projected to add to city coffers that year.

The 757-room complex has lost more than $70 million since opening in 2008. It has been forced to dip into reserve funds and a hotel occupancy tax to make its semi-annual bond payments.

So far, the hotel has not used the so-called “$7 million backstop” of city-pledged funds to pay its creditors.

While the five-member panel gave the refinancing measure its approval, their green light did not come without some skepticism.

Although it will ease the hotel’s plight in the short run, “I just don’t see this deal as the solution,” said board member Frederick W. Meier Jr., a retired banker.

He noted that the hotel will still be burdened by the original debt placed on the project by then-Mayor Martin O’Malley, who argued that the city had to get into the hotel business in order to make the adjacent Baltimore Convention Center a success.

“Do you think this is a solution,” Meier asked Mayor Pugh before the board voted on the measure.

“I think that it is a long-term solution,” Pugh replied, adding, “If we would sell the hotel today, we certainly couldn’t pay off the debt.”

She expressed optimism that the Hilton remains the “preferred hotel” for convention goers and for sports teams playing at Camden Yards and M&T Stadium.

“It is not unoccupied. It certainly is being used. I think the projected room rates have been too high and that has been a problem,” she said.

At the same time, Pugh expressed frustration with efforts by some business and civic leaders to enlarge the convention center and build a second hotel.

“In the conversation now around an expanded convention center, there is talk of another hotel. Just no more, okay? No more [hotels],” she told the panel.

Kraus said the money saved from the bond refinancing will be funneled back to the Baltimore Hotel Corp., the semi-private entity that owns the property, to cover bond payments and to make physical improvements. Among those improvements will be an upcoming $11 million “refresh” of the rooms.

According to Pugh, such refurbishing is absolutely needed.

“We don’t need another rundown hotel in Baltimore,” she said, while Meier injected that “10-year-old Hiltons get very tired.” 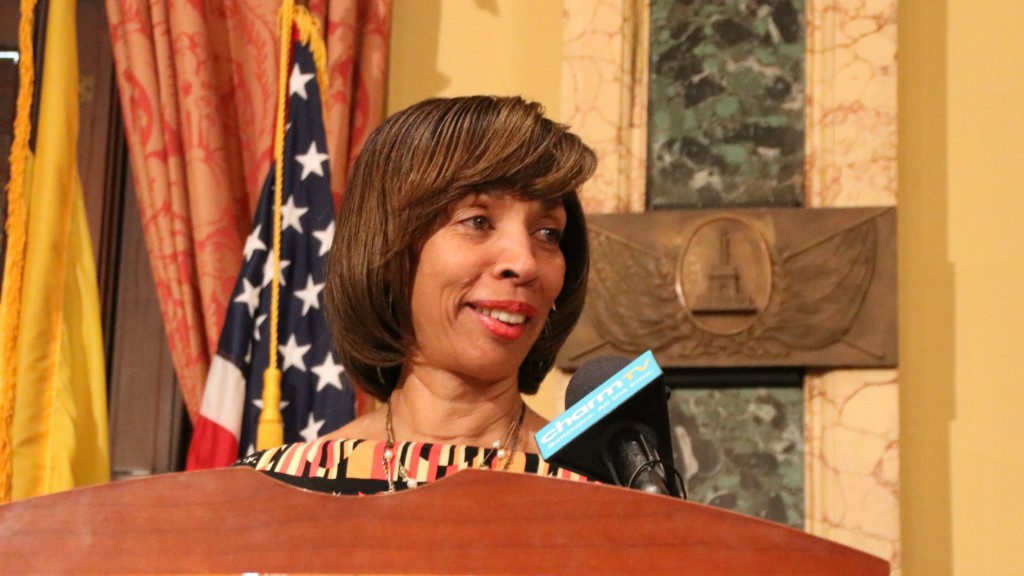 The Hilton remains the preferred hotel for convention-goers, says Mayor Catherine Pugh. But she shudders at the thought of another convention hotel. (Fern Shen)

Adding to its repair needs and debt woes, the hotel is failing to meet its anticipated occupancy and room rates.

The city’s hotel consultant, HVS, has done modeling that projects the Hilton to reach 72% occupancy and $190-a-night room rates by fiscal 2019.

Piper Jaffray & Co. will use HVS’s modeling data to market the new hotel bonds, Kraus told The Brew. He expects as much as $330 million in revenue bonds to be issued by the city in June, which will then transfer the bond proceeds to the Hotel Corp.

The Hotel Corp., meanwhile, is renegotiating a lower-cost management agreement with Hilton, Kraus said. “This refinancing has forced our hand to require them to come to the table. We’re saying, ‘We need some help from you guys,’ and they’re saying, ‘Okay, but we want to extend our  contract.’”

Overall, according to Kraus, the city’s venture into the hotel business is looking up.

“You have to remember that the Hilton opened in ’08, right in the middle of the recession. The convention business went way down. It’s now beginning to climb its way back up. We’re not where we thought we would be at this point, but it is getting better.”

In 2014, the Rawlings-Blake administration made the same prediction. Despite six years of consecutive losses, the hotel was at a turning point, according to then-Finance Director Harry E. Black.

Black cited as proof the $72,000 in taxes that the Hilton had paid to the city that year, which previously would have gone into debt service. “It’s a significant moment,” he told reporters.

Black’s prediction came a year before the death of Freddie Gray sparked a night of rioting – and helped send tourism and the convention business into a tailspin.