A little over a year ago, activists were fighting a New York company’s plan to put a trash-burning incinerator near homes and a school in South Baltimore – and even spending a night in jail to make their point.

Yesterday they were the toast of City Hall, invited to testify on a City Council resolution to commence a planning process leading to the formal adoption of a “zero waste” goal for Baltimore.

Adopted (or being adopted) by cities like San Fransisco and Boston, the “zero waste” philosophy means moving away from landfills and incinerators and toward more recycling, re-use, repairing, composting and other ways of sustainably managing solid waste.

“Today is not about what we stopped,” said activist Destiny Watford, of Free Your Voice, the group that halted the Energy Answers plant proposed near her home in Curtis Bay. “It’s about asking what we want to make happen.”

Programs already underway – everything from the city selling waste logs at timber auctions to organizations like Second Chance, Inc., which salvages materials from old buildings – were described as models for a future Baltimore with less waste and more green jobs.

But several speakers pointed to something they said does need to be stopped if Baltimore is to truly embrace “zero waste” – the city’s use of the aging Wheelabrator Baltimore incinerator near I-95.

“It accounts for 37% of all industrial emissions in our city which is insane,” Swinton pointed out.

He and others urged the city to begin planning now for a future without the 32-year-old trash-burning plant.

In July 2011, as part of the city’s 10-year Solid Waste Plan, the Board of Estimates ratified a 10-year agreement for the city to dispose of 200,000 tons of solid waste at BRESCO annually.

“We need to move fast,” he said, noting that the city’s contract with Wheelabrator is set to expire in less than five years.

In city government, there is widespread support for the idea of adopting the “zero waste” goal.

The Judiciary and Legislative Investigations Committee unanimously approved 17-022R, a resolution calling for city agencies and experts to meet and begin discussing “the development of a Zero Waste plan for Baltimore that will advance sustainability, public health, and job creation.”

Pledging support, Marcia Collins, legislative liaison for the Department of Public Works, reviewed wins and losses in Annapolis, including the failure of the bill to ban polystyrene packaging and a bill to study “End of Life Management of Mattresses.”

Dumped mattresses are just one of the solid waste problems Baltimore is dealing with, Collins said.

“We pick up 3,600 – 5,000 mattresses a year,” Collins said. “We’re looking for ways to recycle them.” [She means reclaiming materials in the mattresses, not making them suitable for use again as mattresses.]

Neil Seldman, founder of the Institute for Local Self Reliance, said the low cost of recycling in Baltimore right now, less than $20 per ton, presents an economic opportunity.

“This is a momentous point economically for Baltimore,” Seldman said. “This is a cash cow for the city in terms of jobs.”

By contrast, incineration is more costly, he said.

According to the city’s 10-Year Solid Waste Management Plan, the cost to the city for BRESCO incineration is $50 per ton.

Several speakers yesterday noted that BRESCO’s NOx (nitrogen oxide) emission controls are overdue to comply with new federal standards and are currently under review by the Maryland Department of the Environment (MDE).

NOx is the primary pollutant that, along with heat and sunlight, causes the formation of ground-level ozone. Ground-level ozone can worsen the effects of asthma and the Baltimore area has long been considered out of attainment with federal air quality standards for ozone.

NOx also contributes to the formation of nitrogen dioxide, another pollutant that can worsen the effects of asthma, and fine particulate matter, which can cause premature mortality due to heart and lung disease.

Leah Kelly, an attorney with the Environmental Integrity Project, said the aging plant has high emissions and low efficiency.

“BRESCO emitted a higher NOx rate in 2015 than any of the other large electrical generating plants in the state per unit of useful output,” Kelly said.

“In fact, in 2016, the Wheelabrator Baltimore incinerator emitted 1,141 tons of NOx, an increase from 2015 and the second highest level of NOx that this incinerator has reported in the last decade,”she said.

At a January meeting at MDE headquarters in Baltimore, Wheelabrator proposed to reduce NOx emissions from the Baltimore incinerator by about 60 tons a year – “a very small amount,” Kelly said. 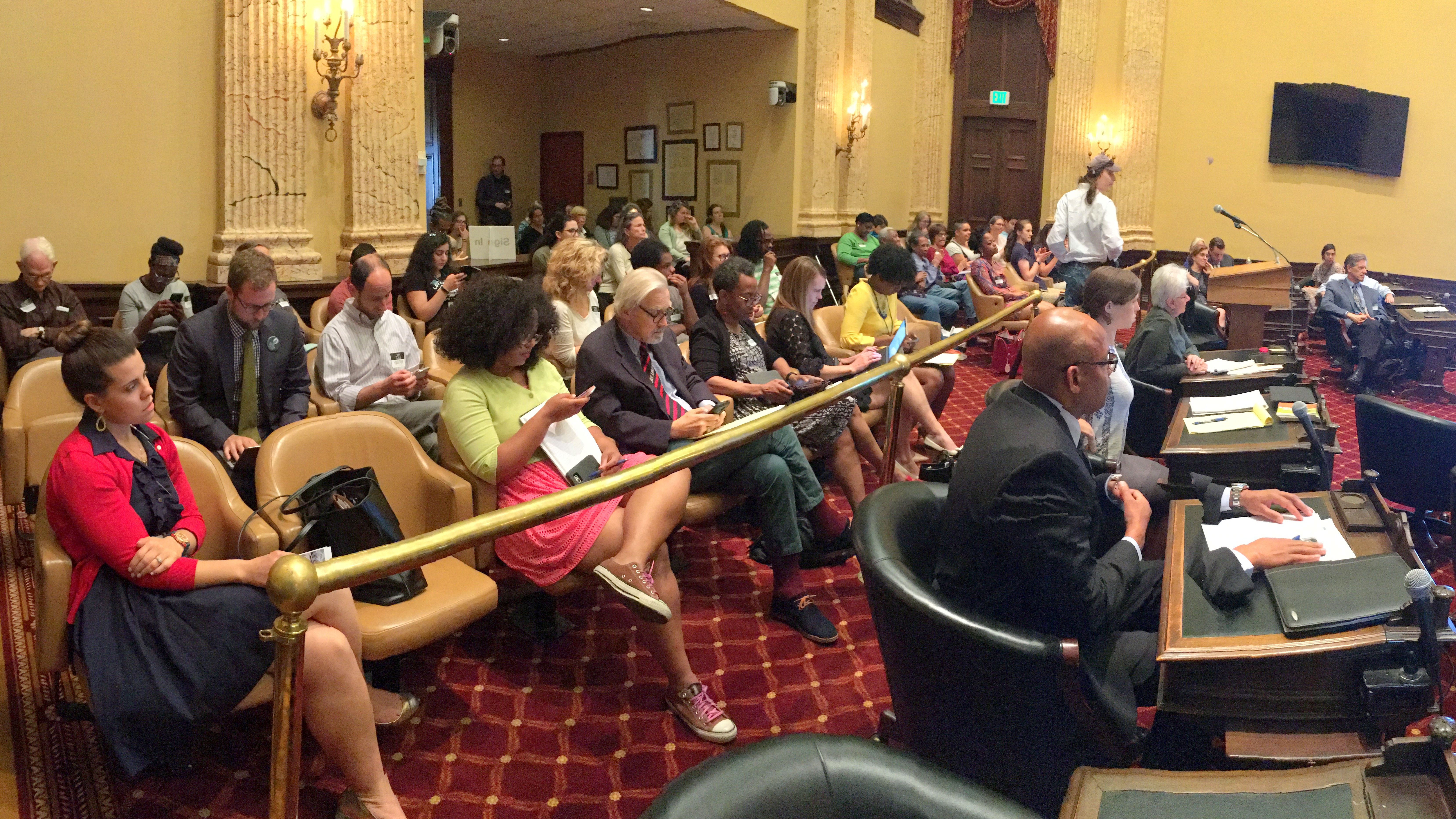 Audience for a hearing on Councilwoman Mary Pat Clarke’s resolution to begin discussions about the adoption of a “zero waste” goal for Baltimore. (Fern Shen)

At that meeting, a Wheelabrator representative said the company is doing the best it can given the plant’s design.

Kelly told the councilmembers she found BRESCO’s emissions “particularly troubling” because Wheelabrator receives public subsidies as a Tier 1 source of renewable energy under the state’s Renewable Portfolio Standard, a program that is supposed to encourage the use of clean, non-polluting energy. 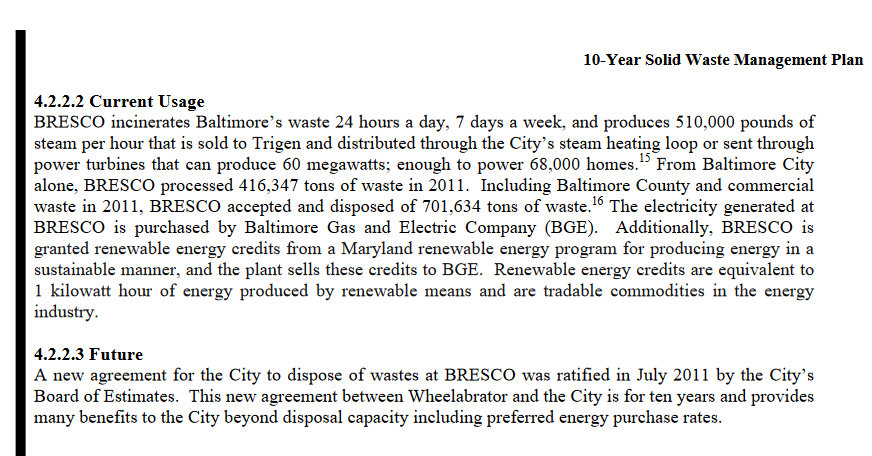