Four weeks ago, The Brew reported that Kimberly B. Morton had been offered the job of chief of staff by Mayor Catherine Pugh.

She was replacing Tisha Edwards, who (we had earlier reported) tendered her resignation after less than five months at her $190,000-a-year post.

“I can tell you your story was so unfactual,” he stated the day after the story appeared, following the mayor’s May 3 press availability.

“There was hardly anything that was true,” he continued. “Someone was feeding you something that they wanted to seem true.”

According to McCarthy, the mayor had not decided on the person she wanted to serve as her top aide whose portfolio includes such weighty issues as policing and the federal consent decree, public safety and government restructuring.

“I don’t think that’s going to happen very soon, to be honest with you. The mayor is looking at a lot of candidates,” he said. (During her May 3 press availability, Mayor Pugh also said she had not settled on a chief of staff.)

Today a photo of Baltimore’s new chief of staff appeared on the city’s official website.

It was Kim Morton.

We have reached out to McCarthy for a response. We will publish it when we get it.

UPDATED 5 pm: McCarthy said the mayor appointed Morton chief of staff on Friday, May 26. He added, “Your story about the offer and the discussion around the position with Kim Morton was not close to being accurate. At that time she was most definitely not under consideration.”

Morton is a lawyer and a 13-year veteran of city government, with most of her time spent in the Department of Public Works where she served as chief of staff.

About three years ago, she transferred to the mayor’s office and became the deputy to Kaliope Parthemos, Mayor Stephanie Rawlings-Blake’s chief of staff.

After offered the chief of staff job in April, Morton has maintained a low profile. Alexandra T. Smith, a recent import to the mayor’s inner circle, has served as Pugh’s aide in public settings, attending, for example, Board of Estimates pre-meetings at the mayor’s side. 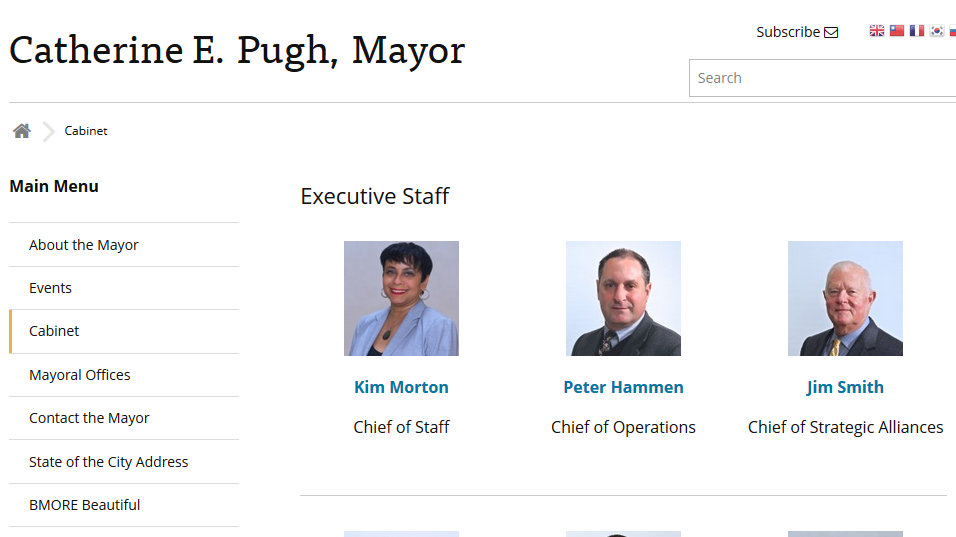