A gathering of city school teachers, students and public officials abruptly turned from defiant to celebratory last night, after a councilman announced that Mayor Catherine Pugh had agreed to a budget deal that diverts more money into school and youth programs.

“About time, better late then never. This is what we wanted,” said Samirah Franklin, a leader of the Baltimore Youth Organizing Project and one of the speakers at a budget rally organized by City Council members at the War Memorial building.

Franklin and hundreds of others had been poised to continue a public pressure campaign waged by the council in recent weeks to persuade Pugh to fund youth-oriented programs.

The agreement, Costello said, would channel $10.4 million primarily into city public schools over the next three years.

“We’re very appreciative that Mayor Pugh shares our values and one of our values on this council is prioritizing the youth in this city,” Costello said. “We do that through budgeting, and that’s what we were able to do today.” 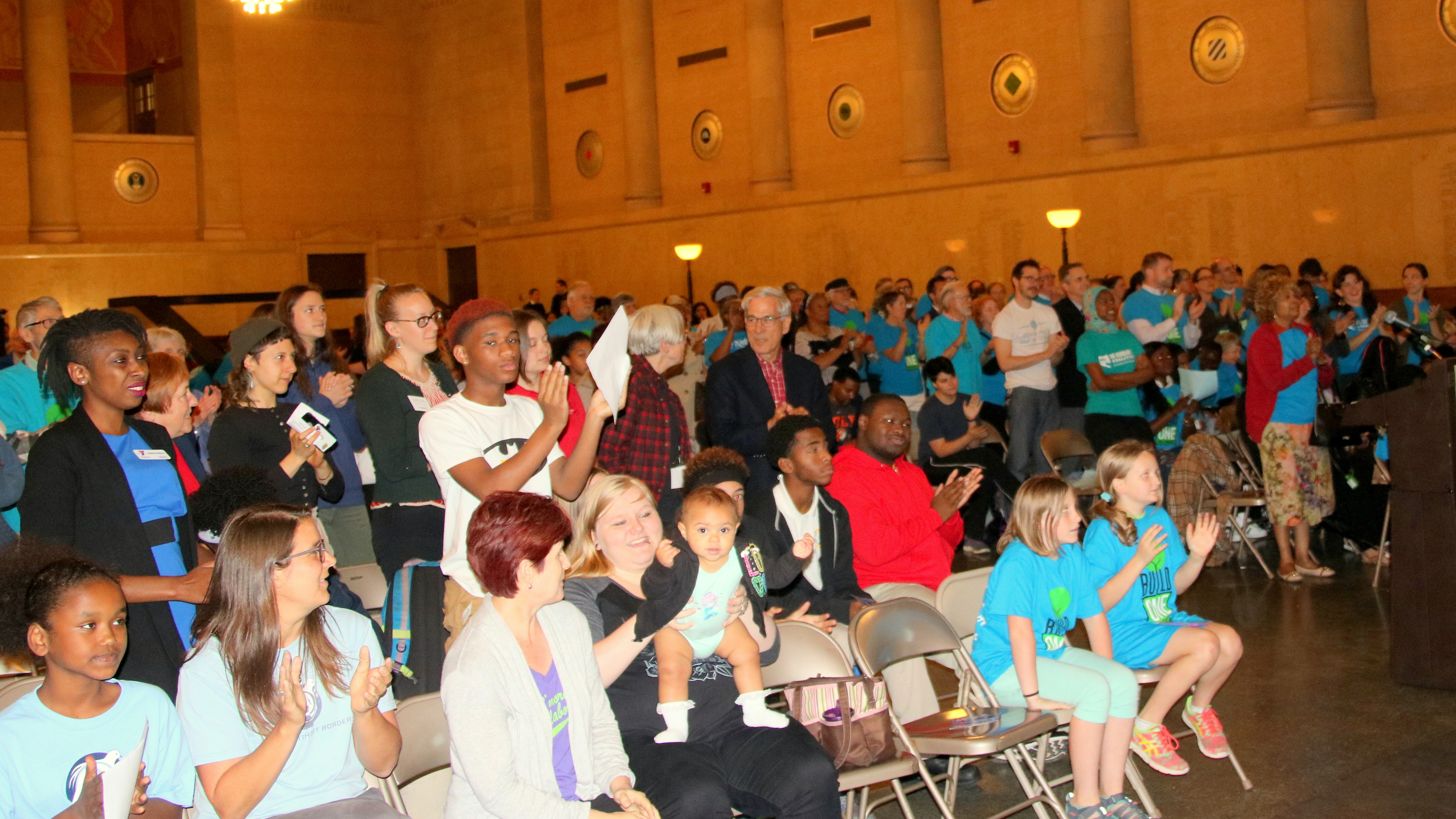 Participants in a hearing at the War Memorial organized to protest cuts in funding for youth programs discovered the funding is to be restored. (Louis Krauss)

As part of the deal, Pugh is restoring $2.6 million in funding for after-school programs and for more than 60 “community schools” across the city.

These schools are assigned coordinators who work to find resources to support the school community outside of the classroom, offering English classes to the parents in mostly Spanish-speaking neighborhoods, for example.

Also restored as part of the budget deal is $1.5 million in funding for the youth-oriented anti-violence program Safe Streets, that uses former offenders.

Franklin and the other speakers scheduled to plead for more funding said they were pleased.

“She came around, we look forward to working with her in the future,” Franklin said.

“It came sooner than I expected, but I am so glad it did,” said Julie Oxenhandler, a founding member of Baltimoreans for Educational Equity (BEE).

“Particularly for the students who were speaking tonight, I think it’s a special experience for them to see what for them seems like an immediate reaction to their efforts,” said Oxenhandler, who is also a teacher at the Afya Public Charter School in Northeast Baltimore.

Councilman Zeke Cohen, speaking afterwards with The Brew, said the youth advocates got everything they wanted. But he wasn’t sure exactly how the funds were being re-allocated and noted that council members and the mayor’s office are still finalizing a public announcement with more specifics.

The cuts did not include reductions in the police budget, a priority shift that many had sought during weeks of unusually contentious wrangling between the council and Pugh over her $2.8 billion spending plan.

The Council is empowered to cut funding from the mayor’s budget but not to spend it. Council members had said a $2.4 million spending cut in Pugh’s budget would reduce after-school program participation by 1,000 children and deprive 3,400 families from participating in community school programs.

The city’s record-setting homicide rate, advocates said, means money should be spent to support city youth and help prevent crime and bloodshed in the first place.

When Pugh resisted, the Council hit back, voting to eliminate the budget for the city’s budget office. Ratcheting up the pressure, the Council voted Monday for additional cuts.

Cohen, who organized yesterday’s rally, said it is uncommon for the body to unanimously favor such a challenge to the administration.

“That is what happens when you have a City Council united that is willing to listen, and young people willing to speak up to fight for the things they believe in,” Cohen said.

“We don’t get enough of that in Baltimore, and moments like that are how we rebuild our democracy.” 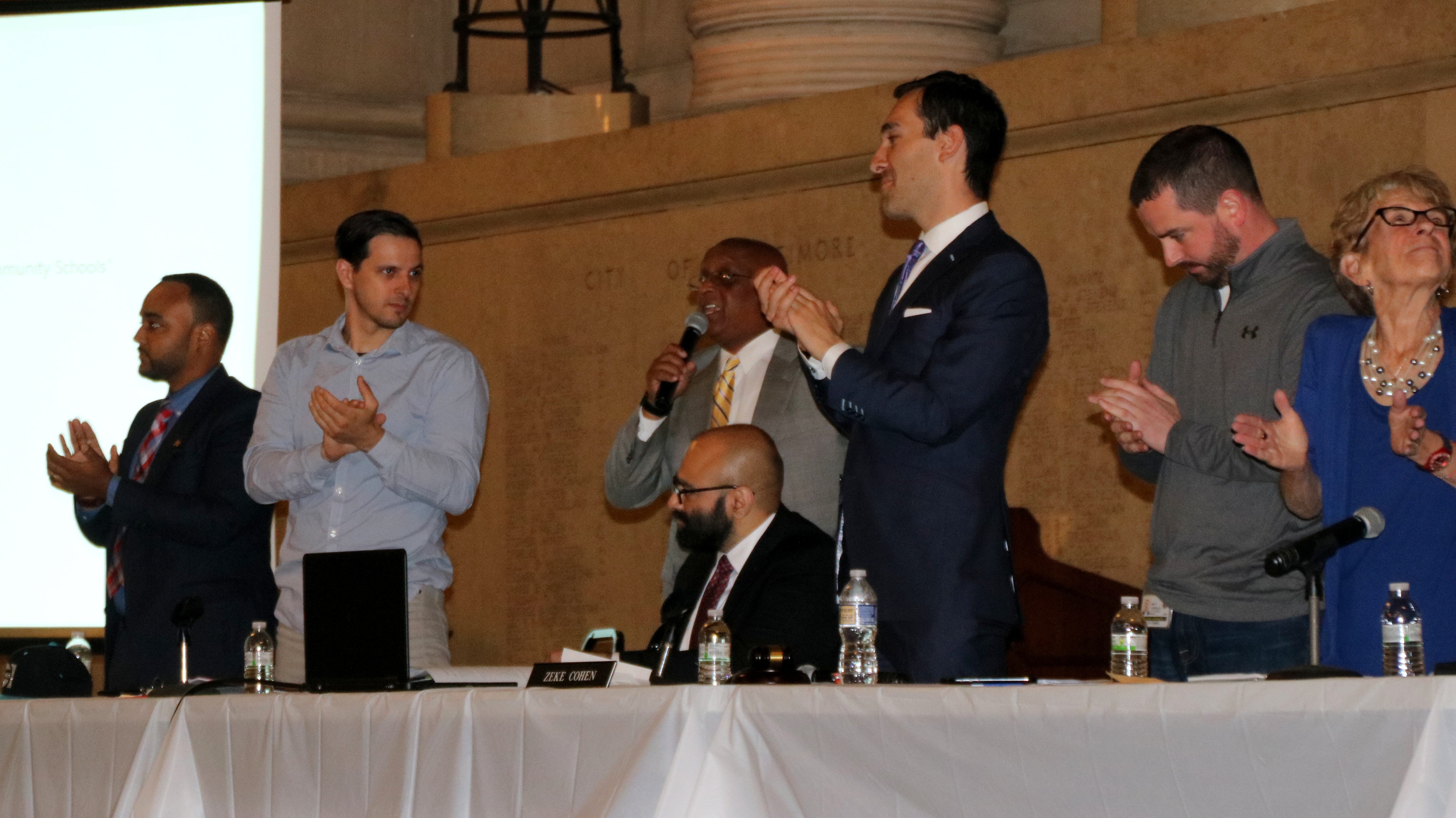