Community groups and individuals opposing a developer’s plan to build a 148-unit apartment building behind Belvedere Towers in North Baltimore checked the City Council website over the weekend and got a shock:

Both the preliminary 2nd Reader vote and key 3rd Reader consideration for the “Overlook at Roland Park PUD,” or Planned Urban Development bill, were on the schedule for the same day – today.

The scheduling issue flared up at the City Council luncheon today when Councilman Isaac “Yitzy” Schleifer, who is sponsoring the bill, asked Council President Bernard C. “Jack” Young to state publicly whether the Councilman had asked him to schedule today’s 2 p.m. special session.

“No,” said Young, continuing with some heat, “People are accusing me of holding this meeting to get a PUD through.” Rather, he said, the meeting had been scheduled to handle budget matters.

Afterwards, Young’s chief of staff Lester Davis said that it is a time-honored practice to place a bill approved by committee on the next Council’s agenda.

Young was asked by The Brew why he couldn’t have kept the bill on the agenda for today’s regular 5 p.m. meeting – which he acknowledged would have meant sticking with the original mid-July final approval vote.

“You’re asking me to go against our normal procedures,” Young replied.

The bill was passed unanimously at the 2 p.m. session by the full Council, with one abstention (by Councilwoman Mary Pat Clarke, who has said she has family in a neighborhood near the project).

In brief remarks, Land Use and Transportation Committee chairman Edward Reisinger noted that “both community leaders supported the bill, ” drawing groans from some in the crowd.

It’s a sensitive point since many members of the Poplar Hill Association and the North Roland Park Association said their leaders acted unilaterally without consulting the membership or taking a vote.  Organizers say they have collected signatures from about 70% of the residents in the two neighborhoods saying they are opposed to the project.
__________________________________

Alarmed at the change from the original schedule – which called for the second reader vote to take place today at 5 p.m. and a final vote to be taken on July 17 – opponents sent out email alerts on social media.

“Someone down at City Hall was beavering away ON A SATURDAY to change the readings schedule,” wrote Poplar Hill resident Margaret Cochrane, in a NextDoor posting with the subject heading of “Dirty Tricks.”

One of the opposition organizers, Cochrane and her husband Hunter Cochrane own property near the proposed apartment building, to be located near the intersection of Falls Road and Northern Parkway.

Asked late Sunday why the legislative body had taken the unusual move of scheduling the bill twice in one day, a spokesman for Council President Bernard C. “Jack” Young sent the following reply.

“It will be held one week. Final passage would be June 19 at the regularly scheduled meeting,” chief of staff Lester Davis replied via email.

Asked why the change from the original schedule – which had the actions taking place a week apart as is typical – Davis did not respond.

As of this morning, the online agenda still has the bill scheduled for both a preliminary vote and 3rd reader consideration today, allowing the June 19 final vote.

The Council’s meeting agenda, released on Saturday, regarding today’s action on the Overlook at Roland Park bill.

Margaret Cochrane said the messages from the Council were “confusing.”

Opponents plan to hold up signs this morning at the Northern Parkway/Falls Road intersection to alert motorists to a project they say will worsen traffic at an already congested intersection.

And they plan to attend today’s Council meetings.

Thumbs down from Civic League

The speeded-up schedule comes as a neighboring community group is joining the fray over the project planned by Blue Ocean Realty’s Jonathan Ehrenfeld.

Last Thursday, Al Barry, the developer’s representative, and project opponents made presentations to the Roland Park Civic League board.

After discussion, the board voted overwhelmingly to oppose Bill 17-0049 that gives Planned Unit Development (PUD) approval to Blue Ocean to build the six-story, 80-foot-high structure.

Blue Ocean gained an option on the undeveloped land as part of its $30.2 million purchase of the Belvedere Towers last July.

“Despite the fact that the development is only yards away from our boundary, we were not included in the communication loop and have come to believe the development may negatively impact our community,” League president Robert H. “Hap” Cooper III complained in a letter to Councilwoman Sharon Green Middleton, who voted in favor of the development at a Land Use committee hearing last week.

“The Roland Park Community plans to do everything in our power to keep this development from moving forward,” Cooper wrote.

Another community with a stake in the project, the Mt. Washington Improvement Association, has yet to receive a presentation about the bill.

Their meeting is set for tomorrow evening, or a day after the project’s currently scheduled key 2nd reader consideration in the Council. 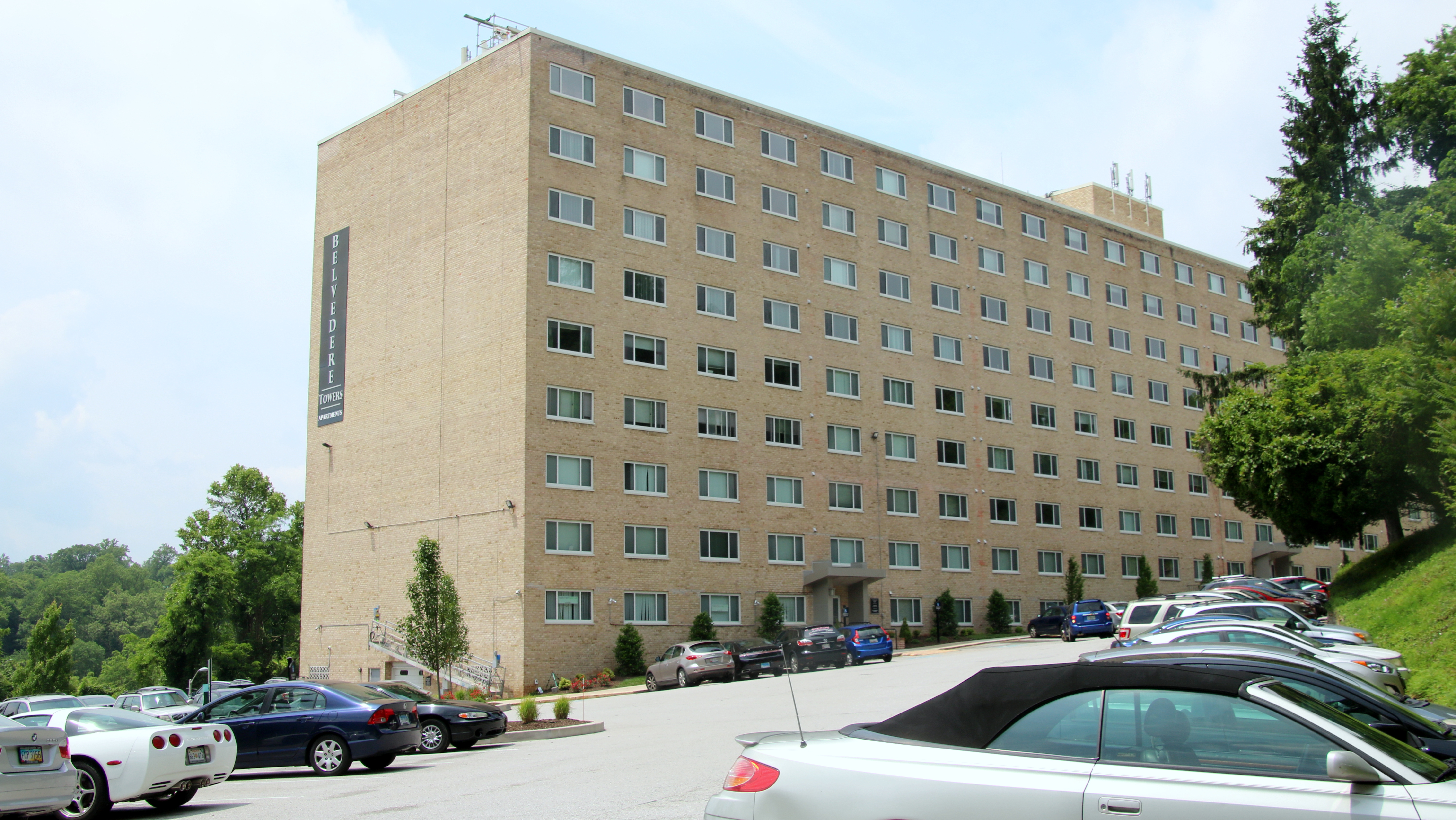 The Council is set to vote on a PUD that will permit a six-story apartment complex on the hill above Belvedere Towers, shown here, that opponents say will only increase car congestion at the already overloaded Northern Parkway and Falls Road intersection. (Fern Shen)