Three years ago, sounding the alarm about “a dramatic increase in heroin-related emergency room visits in Maryland,” Gov. Martin O’Malley announced a four-pronged response to the crisis, including expanded access to the life-saving drug naloxone and other measures.

Since then, 4,489 Marylanders have died from drug and alcohol intoxication, with Baltimore the epicenter at 1,392. That’s more than a quarter of the total coming from a city that has roughly one-tenth of the state’s population.

I’ve followed this phenomenon, with care as a writer and with compassion as the mother of a son who has been struggling with addiction for more than three decades.

The last two weeks have been particularly hard on me, as the release of city, state and federal data have confirmed what Maryland families and officials already understood – the opioid epidemic is escalating in Baltimore, and across the nation, to outrageous levels.

Given that Baltimore and the D.C. suburbs are blessed with some of the finest health care and medical research institutions in the world, the grim news suggesting our area may lead the nation by some measures in opioid addiction is especially numbing.

The first news came with the June 5 release of an annual report by the Maryland Department of Health and Mental Hygiene.

It showed that in 2016, intoxication deaths from drugs and alcohol in Maryland were 66% higher than in 2015. Of these deaths, 89% were opioid-related.

City deaths from all overdoses totaled 694. Compare that to the 318 homicides in the city last year.

Of those overdose deaths, 454 were as a result of heroin use.

More bad news came on Monday when Health Commissioner Leana Wen said the city is now rationing naloxone, the overdose-reversal drug that bystanders or family-members can use to save lives.

A new state law eliminates the requirement for naloxone training – a good move but one which Wen says probably will increase the demand.

Wen has asked the state to release a portion of the $10 million delivered to Maryland last month by the federal government under the Obama Administration’s 21st Century Cures Act.

The city could use the funds for more treatment, and for more naloxone, she has said.

The state has not responded officially.

Why the delay, Maryland? Why when those funds could literally save lives?

In 2014, the most recent year for which statistics were available, Maryland had the nation’s highest rate of opioid-related in-patient admissions. The state had 404 stays per 100,000 residents in that year, a new report said. 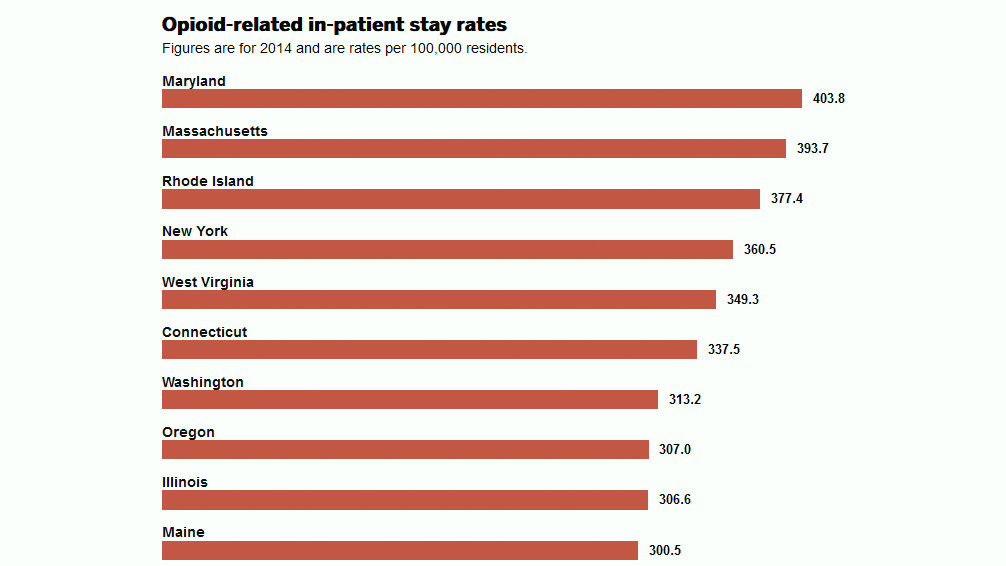 Maryland was second in opioid-related emergency department visits, after Massachusetts, with 44 states and the District of Columbia participating.

All this according to an agency under the federal Department of Health and Human Services.

In its report, the Agency for Healthcare Research and Quality (AHRQ) defined “opioid-related” as “events associated with prescription opioids or illicit opioids such as heroin.”

Researchers will pore over the striking variations found in the AHRQ results in such factors as age, gender and location.

They show a faster increase in in-patient stays for women than men and a similar increase in emergency room visits for both.

But for me what’s important is the overall message of all these studies and news reports – that we in this city and state are at the leading edge of a horrible trend.

These findings may seem like troubling lines on a bar chart to some. But for addicts and their family members, they’re a measure of deep pain and terrible loss.

View from the Trenches

Advocate Tom Bond sees it on a daily basis. I asked him about the latest report.

“This is just one more study that proves we’re living in the Wild West,” said Bond, director of programs at the East Baltimore nonprofit Helping Up Mission for men who are addicted and, in many cases, homeless.

Last Monday alone, 20 men arrived at the mission asking for help, he told me. Until the last few months, that was the weekly average.

Another change is the prevalence of heroin and fentanyl. “At one point, most of the men were abusing alcohol. Then it was cocaine. Now, they’re not sure what they’re using, but our lab reports clearly show opioids” he said.

The capacity at Helping Up is 500, but no one is turned away, Bond said, noting that the geographic mix of clients also is shifting.

“Most of the men used to be from the city, but now about 50% come from surrounding counties,” he told me.

His conclusion from the trenches: Emergency treatments to bring people back from the brink are fine, but they won’t solve the larger problem.

The crisis facing the region will only be stabilized through meaningful comprehensive treatment of addicts, not public service posters and maintaining an adequate supply of overdose-reversing drug.

“In Maryland, we hear a lot about harm reduction and safe shooting zones and saving people with naloxone,” Bond said, “but treatment beds are what we need desperately.”

– Jo R. Martin is a Baltimore native and journalist covering the complexities of the addiction epidemic.