The Brew has joined a 30-year-old woman in a federal lawsuit objecting to the city’s policy of prohibiting persons who receive cash settlements in police brutality cases from speaking out publicly – or talking to the media.

The lawsuit, filed today in U.S. District Court by the Maryland ACLU on behalf of Ashley Overbey and this website, alleges that city officials illegally withheld half of Overbey’s $63,000 settlement because she described her case on a newspaper blog.

The city’s action, the suit says, violates First Amendment guarantees to free speech and a free press and is illegal under Maryland’s public transparency law.

More broadly, the suit challenges a longstanding practice by city lawyers of forcing victims of alleged police brutality to sign confidentiality agreements as a condition of settlement.

“These gag orders have silenced numerous victims of police abuse,” Susan Goering, executive director of the ACLU, said at a press conference today.

Describing the filing as “one of our most consequential cases,” she said it was part of the ACLU’s ongoing campaign “to increase police accountability and transparency for the communities they are sworn to serve.”

The suit seeks an end to the restrictive settlement language and the payment of the $31,500 withheld from Overbey for writing about her case.

The Brew seeks no monetary damages, but wants free access to plaintiffs after a case is settled. “The city’s lack of transparency prevents us from doing our job,” said editor Fern Shen. “It has been very frustrating that we and other reporters can’t present a full and accurate picture of these police-civilian incidents.”

The ACLU filed a second lawsuit today against the city of Salisbury and the Salisbury Police Force on behalf of the Real News Network. The Baltimore-based organization was denied any details about the settlement of a 2014 case where four Salisbury State University students were roughed up and arrested by a police officer.

“Covering policing on the Eastern Shore has revealed there are significant problems with police transparency,” Stephen Janis, a reporter for Real News, said today.

“They beat me up”

Speaking to the media at the ACLU’s office in Woodberry, Overbey described her April 30, 2012 encounter with police who responded to her call that her house had been burglarized.

“Instead of them helping me, they brutalized me. They beat me up. There were three male officers who beat, punched, kicked and attacked me as if I were a male or a threat. I was tased. I was subsequently charged with six criminal charges and locked up for 24 hours, alongside my mother.”

The charges were later dropped, and the city responded to her lawsuit charging assault, battery, false arrest and false imprisonment by agreeing to settle the case out of court.

An excerpt from the city’s 2014 settlement agreement with Ashley Overbey:

“I was Brutalized Again”

About a month after the settlement, Overbey said, “the city brutalized me again by stealing half of the settlement that I was awarded. They claimed I had breached the contract. . . I did not understand at the time that I was gagged, and they were not.”

She was to learn that half of her $63,000 settlement would be withheld because she had written comments at the end of a Baltimore Sun story defending herself from commenters who had made disparaging remarks and said she sued the police department just to make money.

“They [the city] never contacted my lawyer to say, hey, we have issues over a breach of this contract. Nothing. I heard I was supposed to get money, and it never came. Then weeks later, my lawyer tells me he has a check for $31,000, which I ended up with $11,000 because he took his cut of $20,000. I was totally devastated.”

How the System Works

The Brew’s Mark Reutter described the secretive process in which the Board of Estimates discloses police brutality settlements and “the barriers that journalists face” trying to find out details about the cases.

“Since 2009, the city has spent around $35 million in settlements to resolve police brutality cases. Cases that are less than $25,000, which are a large number, never receive public notification. Those over $25,000 go to the Board of Estimates, which is controlled by the mayor, where they are approved without discussion.

“Until very recently, what was disclosed in the board’s agenda was only the name of the case and the settlement amount.

“That was it. If requested, the law department would provide a brief narrative drawn from police reports of what allegedly happened in the encounter.

“About 95% of these settlement include in their terms that the plaintiffs are not to speak to the press. Recently, the law department also barred speaking ‘in social media.’ So it’s a very restrictive situation.

“The Baltimore Sun has done some good investigative work on this issue,” Reutter concluded. “They found that in other cities, including in Washington, D.C., and Philadelphia, there are no such gag orders.”

Mayor Catherine Pugh’s spokesman did not respond to a request for comment about the suit. 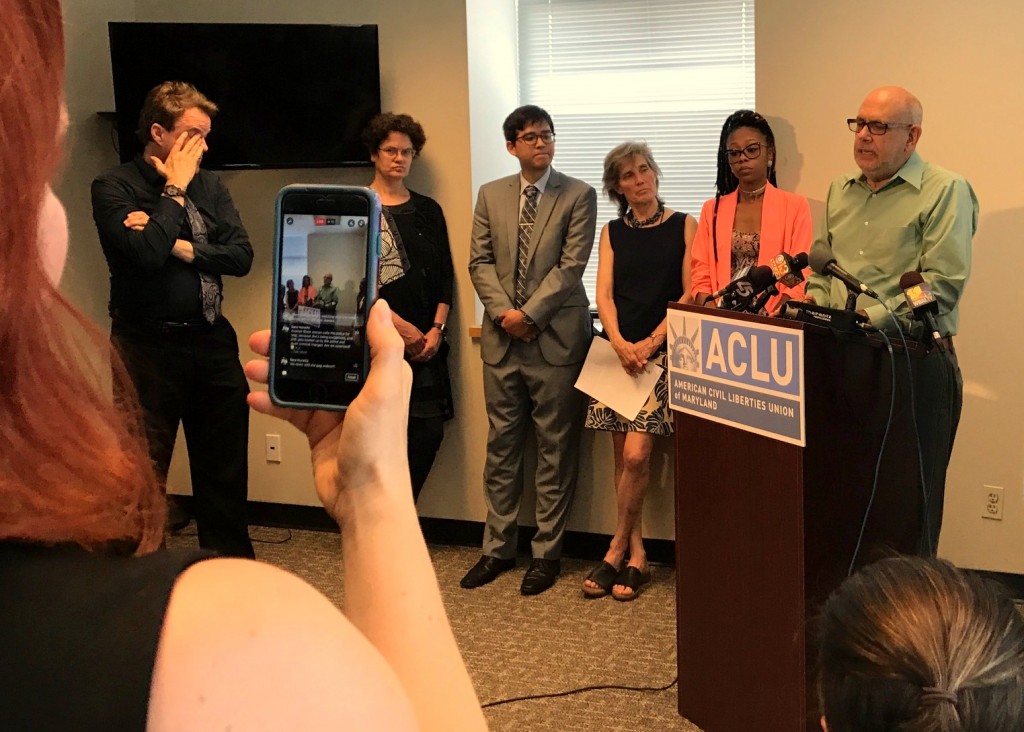