The body camera footage showing what appeared to be a Baltimore police officer planting drugs couldn’t have surfaced at a worse time for City Hall.

On Friday, Mayor Catherine Pugh was announcing she wants a one-year mandatory minimum sentence for illegal gun possession, a move critics said signaled a policy shift that would lead to unconstitutional police tactics.

Yesterday, Pugh’s police commissioner Kevin Davis was before reporters acknowledging the footage raised “serious” questions but floating an alternate scenario apparently intended to be mitigating: intentional re-enactment of drugs they earlier discovered there.

While the allegations are under investigation and the department has made no official determination, Davis said, there could be “other perspectives” on the video that made national news yesterday. It shows an officer in a trash-strewn yard seemingly hiding – then “discovering” – a soup can full of drugs.

“It’s certainly a possibility that we’re looking into to see if the officers in fact replaced drugs that they had already discovered in order to document their discovery with their body-worn cameras on,” Davis said.

“How do you decipher between a re-enactment and just plain falsifying evidence?” one asked, noting that in the case of seven officers from an elite gun unit indicted on racketeering charges earlier this year, officers were alleged to have staged video footage.

“Is that something the department does?” another reporter pressed.

At that, Davis appeared to back off.

“No, that’s not part of our business plan to re-enact the recovery of contraband,” he said.

Today, the main officer featured in the body camera footage – identified by the public defender’s office as Richard Pinheiro – has been suspended.

Two other officer have been placed on administrative duty. The video footage from a January drug arrest, and other cases in which the officers have been involved, are under review by the police and the state’s attorney’s office.

The public defender’s office said it alerted prosecutors to the video last week.

The first portion of the brief footage they released (at about 7:50 in the Baltimore Police Department’s lengthier video above) was recorded automatically – before the officer turned on the camera.

It shows the officer placing a red-and-white can with a plastic bag inside in among the trash covering a rowhouse backyard. (The body cameras have a feature that saves 30 seconds of silent footage before activation.)

He then walks to the street where two other officers are standing and turns the camera on.

“I’m gonna go check here, hold on,” he says, walking back to the yard as the sound of someone cackling can be heard in the background.

“Yo!” the officer says, fishing out the can and removing a plastic bag that has white capsules inside.

The state’s attorney’s office is also under fire with the release of the video, with the public defender’s office saying it informed prosecutors of the possible misconduct.

Heroin possession charges against the man arrested – who had been in jail since January, unable to post $50,000 bail – were dropped last week.

But the public defender’s office said prosecutors should have disclosed the officer’s actions in the video to defense attorneys before allowing the officer to testify in another case days later.

“They had knowledge. They watched it and were appalled by what was on the video, and then for whatever reason made the choice to continue to call him as a witness,” said public defender Debbie Katz Levi, speaking with Fox45 News.

A spokeswoman for State’s Attorney Marilyn Mosby released a statement that does not specifically dispute that allegation.

“Upon notification of this troubling footage, our office immediately implemented established protocols to not only refer this matter to the internal affairs division of the Baltimore Police Department but began identifying active cases involving these officers,” said the statement released late last night.

The public defender’s office, in its statement, said the officer seen with the plastic bag is a witness in 53 other pending cases and that the other officers have active cases as well.

In yesterday’s news conference at police headquarters, Davis showed three additional videos from the scene that he said offer additional context for the 90-second footage released by the public defender’s office.

“To let that initial video that was released by the public defender’s office stand all by its lonesome I think doesn’t paint as clear of a picture as we would like to offer to the community right now,” he said. 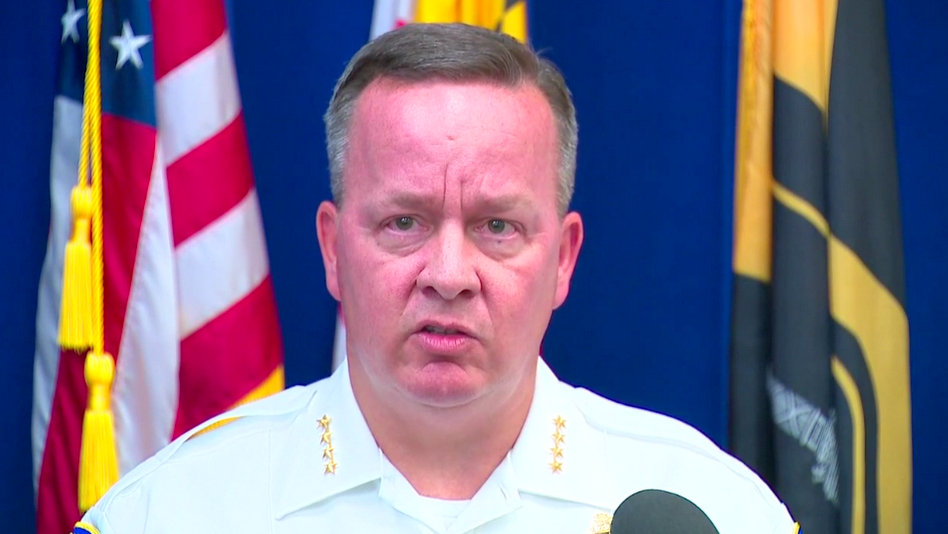 The videos shown, in part, to reporters depict an alleged buyer approached as part of a traffic stop, the arrest of the suspect in a convenience store and several officers searching the yard behind the rowhouse. In all three videos, Davis said, the officers found drugs.

Davis also noted that there is a four or five minute gap when the cameras were turned off and turned back on.

“Is that something we’re going to go back and explore and investigate?” he said. “You betcha.”