More than once Mayor Catherine Pugh asserted “I cannot be more proud” as she announced on Wednesday the appointments of Kendra Parlock and Andrew G. “Drew” Vetter to two of the most important positions in public safety outside of the Police Department itself.

Parlock and Vetter will each pocket $165,000 a year to serve as Pugh’s “eyes and ears” to implement, evaluate, coordinate and analyze a violence reduction plan, which was also unveiled this week in 20-page-booklet form.

With colorful graphics and uplifting pictures, the booklet stitched together Pugh’s ideas (summarized here) about how she plans to reduce violence and crime that has surged under her watch.

The statistical context for her plan could scarcely be more grim.

So far in 2017, homicides are running 19% above last year’s already-high toll.

Robberies have increased by 16%, aggravated assault rose 18%, common assault are up 30% and carjackings have jumped a breathtaking 49%.

So how does the mayor’s new team plan to stem the tide?

“I’ll be reinventing the office,” Parlock breezily told reporters after she was introduced as the new person in charge of CitiStat.

Her first step, she said, would be to rebrand CitiStat’s name to CitiSmart. (CitiStat was developed by former Mayor Martin O’Malley as an analytic tool to track crime and hold police brass accountable; considered highly successful, it was copied by other cities.)

Parlock will be overseeing CitiStat/CitiSmart as director of the Office of Sustainable Solutions. This brand-new office at City Hall is inspired by Michael Bloomberg, the billionaire philanthropist and ex-New York City mayor who is handing out $1.5 million to urban mayors (including Pugh) to establish “Innovation Teams” to analyze and solve urban problems.

Vetter has not been given a new title.

As director of the long-troubled Mayor’s Office on Criminal Justice (high staff turnover, few concrete accomplishments), he said his top priority was to craft its mission.

He clicked off a number of activities such as “rebuild the office, engage law enforcement leaders, data analysis and tracking.”

He declared that he, too, would be performance driven and was determined to “really define what things the city can do” about crime and violence reduction.

In terms of direct experience in the fields of law enforcement and public safety policymaking, Parlock and Vetter have, respectively, zero and  2½ years.

Parlock has spent her entire career as a marketer and manager of chemical products (as befits her undergraduate degree in microbiology at the University of Florida).

According to her Linked-In profile, she has never worked in the public sector.

The last job listed in her profile ended in October 2016, when she left Cabot Corporation, a Boston-based chemical company, after one year and six months as global segment manager for the Purification Solutions Division.

According to the mayor’s office, “Kendra brings a wealth of experience in strategy, business development and innovation. She comes from the private sector where she used market and operations data to develop new product and services and to transform organizational processes.”

(At Wednesday’s press conference, Mayor Pugh also hailed Parlock’s achievement as a Six Sigma Black Belt, which the mayor described as “an exceptional certificate in driving performance with data.” According to the Six Sigma website, the title is bequeathed to those who complete four or more weeks of management training in the Six Sigma principles, including team building, knowledge of lean enterprise concepts and use of analytic tools.)

By contrast, Vetter does have some grounding in law enforcement.

Since February 2015, he’s occupied two managerial areas in the Baltimore Police Department, first as director of government affairs, then as chief of staff to Police Commissioner Kevin Davis.

In terms of political connections, however, Parlock and Vetter seem to have what it takes.

For example, Parlock on December 18 posted a snapshot of herself and Mayor Pugh beaming in front of a Christmas tree at her Bolton Hill home.

“Happy to have our friend Mayor Pugh at our home for Christmas,” she wrote (to which she got this reply from another commenter: “Friends in high places”). 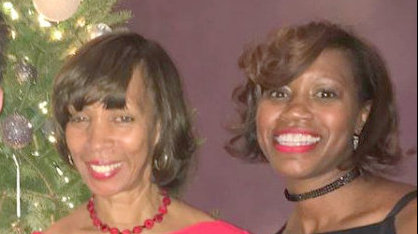 “Happy to have our friend Mayor Pugh at our home for Christmas,” Parlock posted on Facebook next to a photo from a December 2016 holiday party. (Kendrick Rice Parlock Facebook)

We sent the photo to the mayor’s office and received a reply from spokesman Anthony McCarthy:

“This photo was taken at an annual Christmas party that Kendra and her husband host for about 100 of their neighbors and friends. She is an active board member of the Mt. Royal Improvement Association. Mayor Pugh represented Bolton Hill as senator. Numerous other elected officials were also present.  The mayor and Kendra had no formal relationship before Kendra came to work for the administration.”

A Curran who worked for O’Malley

Vetter’s role in the Police Department paralleled his prior duties as a political operative and data wonk for O’Malley.

The grandson of the late Delegate Gerald J. Curran and a relation to O’Malley wife, Catherine Curran O’Malley, Vetter’s first job out of college was as an analyst at CitiStat in 2004.

In 2005-06, he coordinated the O’Malley transition team after O’Malley was elected Maryland’s governor, according to his Linked-In profile.

He went on to serve as special assistant for the governor’s deputy chief of staff, then worked for Maryland Economic Development Secretary Christian Johansson and finally returned to O’Malley’s side as director of government affairs.

With his deep ties to state government, Vetter’s role in the Pugh administration will be to keep the money flowing to the Baltimore Police Department, especially from the Governor’s Office of Crime Control and Prevention that ponies up millions for BPD technology upgrades and crime prevention programs.

Whether Vetter will act as a voice independent of the views of his former boss, Commissioner Davis, is not so clear. Vetter’s longtime role as an “inside player” worried a police source who spoke with The Brew yesterday:

“Just going along with what your commissioner says isn’t the way to go. Now that Vetter’s in this new position, can he push away the relationship he has built with Davis over the last two years and say to him, ‘This is unacceptable,’ and then tell the mayor she’s got to fix it? I honestly don’t know if that’s going to happen.”

Vetter, of course, has the institutional knowledge to serve as the new CitiStat director, but Mayor Pugh has much higher ambitions for that post.

In answer to Brew questions, spokesman McCarthy outlined the duties that will fall to Parlock:

“The mission of the Office of Sustainable Solutions is to make Baltimore more resilient by using data, innovation and technology to create solutions with results that will be sustained beyond the current administration and teams that are currently in place.”

The goals of the Office of Sustainable Solutions will include:

• Launch of an expanded CitiStat program that is focused on violence reduction as the priority.

• Creation of a Performance Dashboard to monitor results and track performance.

• Improve the communication of progress and performance results.

“Mayor Pugh has enormous confidence in both Ms. Parlock and Mr. Vetter to meet the expectations she has for their positions,” the mayor’s spokesman again stressed.