After tweeting over the weekend that he planned to draft a resolution calling for the removal of Baltimore’s four Confederate monuments, Councilman Brandon M. Scott appeared to go even further yesterday.

“We need to destroy them,” Scott announced bluntly at the City Council luncheon yesterday.

That was going too far for City Council President Bernard C. “Jack” Young and several others who said the statues should be removed, but not destroyed.

“I’m opposed to going down the path of destroying anything that’s artwork or human knowledge,” said Eric T. Costello. “I think they should be buried in a very dark closet or storage out of sight.”

Over pasta and salad, the “destroy-vs.-remove” question was chewed over. By the time members began attacking the carrot cake, it became clear that Leon F. Pinkett III, Edward Reisinger, Sharon Green Middleton and President Young sided with Costello.

“I hope there can be a compromise,” said Young – prophetically, as it turned out.

At last night’s meeting, the Council unanimously approved Scott’s resolution calling for “the immediate deconstruction of all Confederate monuments in Baltimore so that they are unable to be put on public display.”

The word “destroy” appeared nowhere in the resolution.

And when a reporter tweeted that the City Council had just unanimously called for the destruction of the statues, an aide to Young quickly texted him back to say this was incorrect.

Scott was asked by puzzled reporters about the change in language after his fiery declaration at lunch. And what does “deconstruct” in this context mean?

Then why not just say “destroy?” 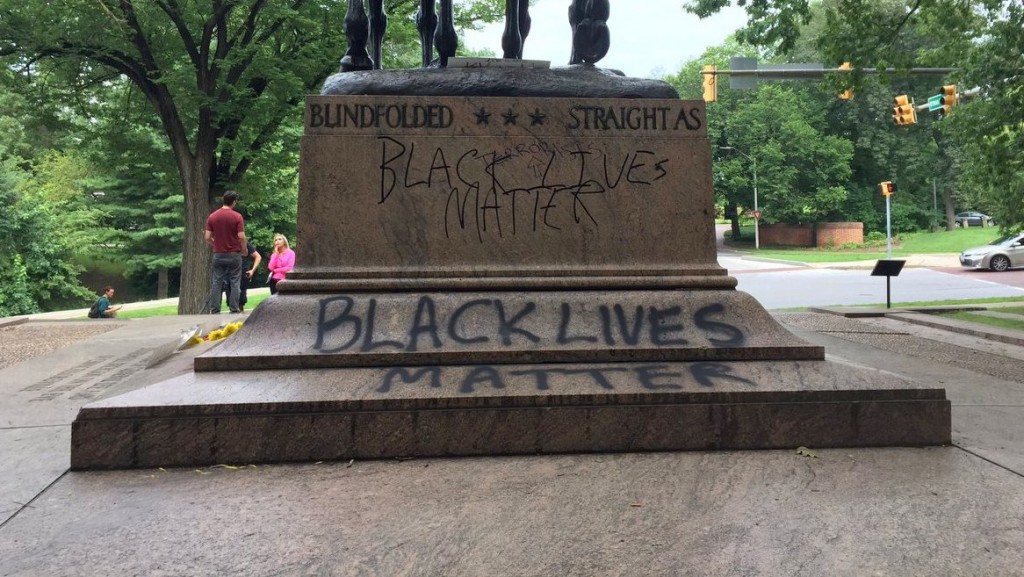 Scott said using that word might encourage people to take it upon themselves to destroy the statues.

“I’m thinking of the use of the word ‘destroy’ during the riots,” he said. “To say ‘deconstruct,’” he continued, “might not be as much of a lightning rod.”

The resolution is not legally binding on the mayor, who actually has the power to tear down the monuments while under some legal limitations.

But what was Scott’s measure actually calling for?

“I want them to be not capable of being put on public display,” he said.

In pieces? In a dark closet? He didn’t elaborate further.

While Baltimore residents have not gone as far as pulling the statues down (individuals toppled a Confederate statue in Durham, N.C., yesterday), at least two of the city’s monuments have been vandalized.

The Confederate Soldiers and Sailors Monument on Mt. Royal Avenue in Bolton Hill was drenched with red paint sometime over the weekend.

And following Sunday’s large demonstration against the Confederate monuments, someone scrawled “Black Lives Matter” and other messages on the Lee and Jackson Monument at the Wyman Park Dell.

Placards and a statue of an African American woman, pregnant and with her fist raised, was also placed in front of the monument.

Amid the public tumult over the issue, Mayor Catherine Pugh said she wants the monuments removed, but that removal will take time.

Yesterday she appointed a committee of mostly city staffers, whom she designated as both a task force and working group, to guide her in working out the details of “deaccessioning,” moving, storing and ultimately finding a new home for at least two of the four monuments outside of Baltimore.

The debate over the monuments has raged online, with defenders saying the statues have artistic and historical value and should remain, and others saying they are offensive artifacts of “Lost Cause” Confederate sympathizers and rallying symbols for present-day white supremacists.

And still others have warned that people may take matters into their own hands, such as this tweet from the account of Lawrence Brown, assistant professor at Morgan State University :