Science enthusiasts, random locals, hospital employees and doctors in their white coats shared a giddy moment, if only for a few minutes yesterday, when the solar eclipse peeked out from the gray gauze of storm clouds covering Baltimore.

The big moment came at around 2 p.m., prompting cheers from the people gathered on a Monument Street sidewalk at the Johns Hopkins Medical campus.

Wearing special sun protection glasses that had been handed around to the crowd, she and the others could see the dark crescent-shaped shadow of the moon, beginning to block out the sun.

“There it goes!” Amin whooped. 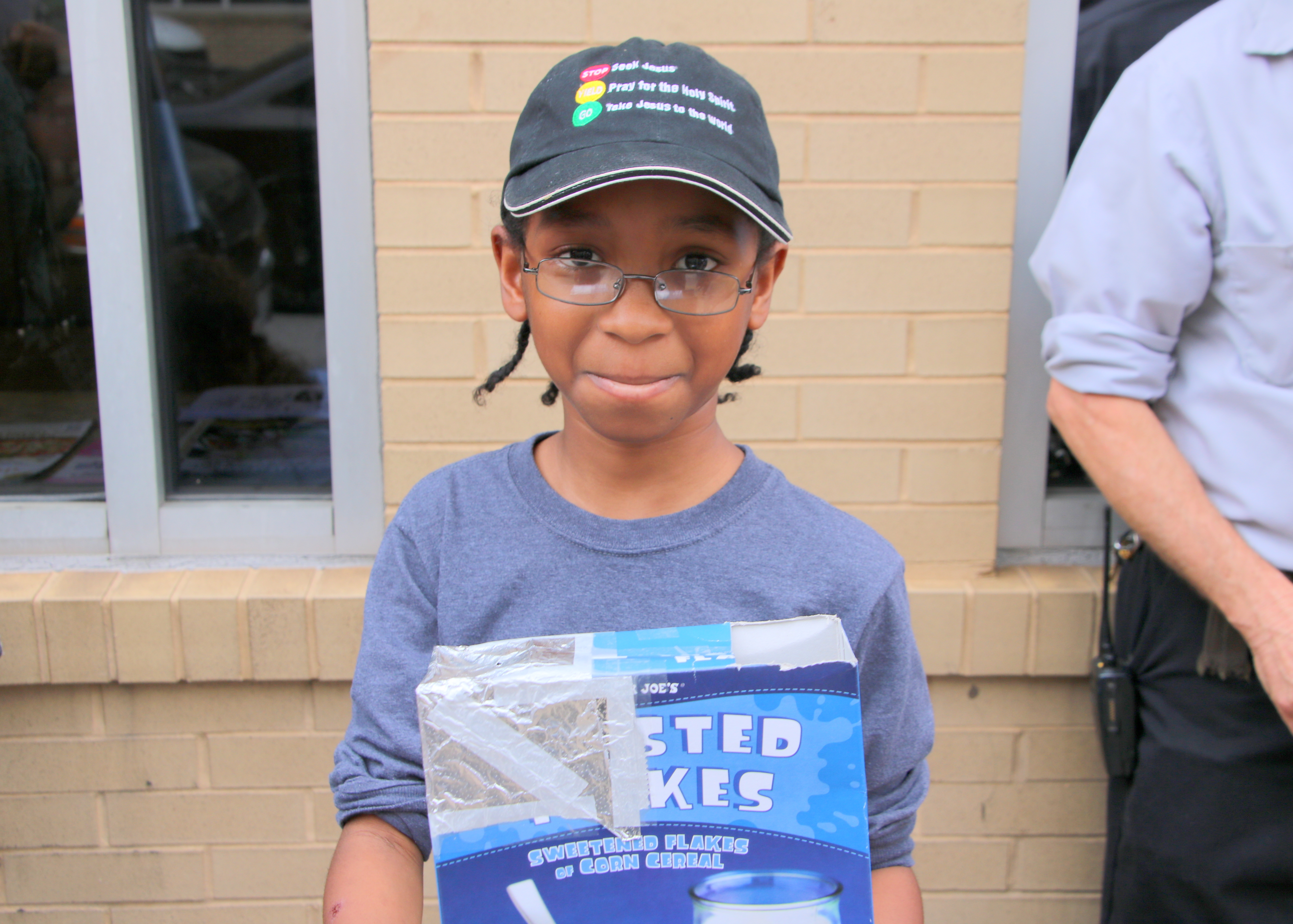 Jayden Moore with his self-made solar eclipse-viewing box at an event organized in East Baltimore by Popscope. (Louis Krauss)

More than a hundred people gathered for the viewing event organized by Baltimore Popscope, the local branch of an organization of amateur astronomers dedicated to bringing people together through public astronomy.

Their events usually feature telescopes like the one member Audrey Buckland was in charge of, encouraging eclipse watchers to get an especially close-up view of the phenomenon.

“I love being the one to adjust this because it means I actually get to view it like a hundred times,” Buckland confided.

Science with a Cereal Box

The eclipse, at the peak time in Baltimore from 2:38 to 2:47 p.m. when the sun was 80% covered, was unfortunately covered with dark gray clouds, followed soon by a wall of rain that event-goers saw approaching. They dashed  into nearby buildings just ahead of the deluge.

However there were a few bright spots in the minutes before. Viewers, equipped with either special sun glasses handed out by Popscope or eclipse boxes they made themselves with aluminum and cardboard.

Being at the clouds’ mercy and given the fact that they weren’t directly on the band of eclipse visibility stretching across the United States yesterday, they could see about 50-60% of the sun covered by the moon. 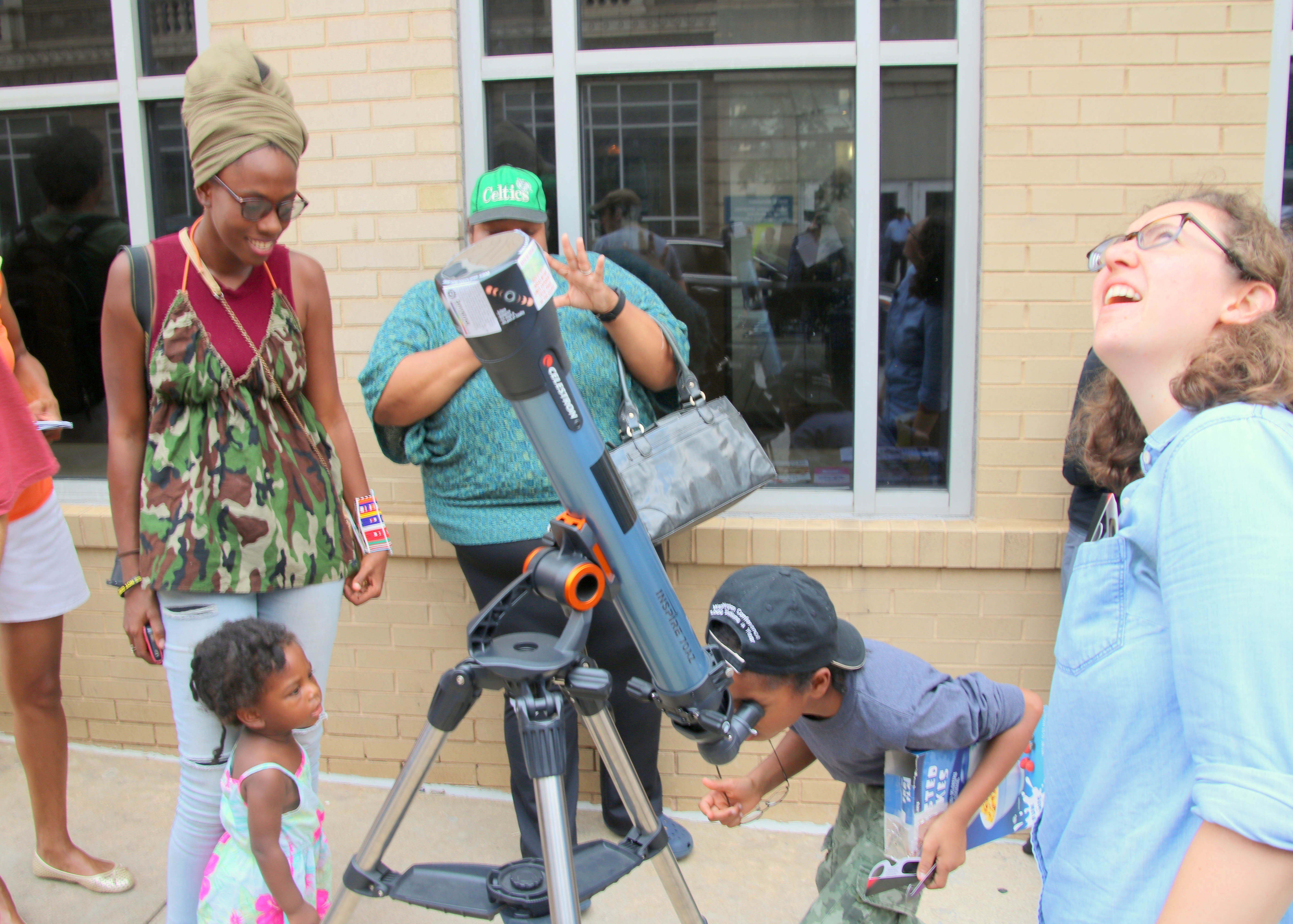 Jayden Moore takes a peek at the solar eclipse through a telescope set up on Monument Street. (Louis Krauss)

Several spoke wistfully about the complete view of totality enjoyed by friends and relatives who traveled to such places as eastern Oregon or North Carolina.

“My brother drove 12 hours from San Francisco to get to Idaho in order to see the full thing,” said Johns Hopkins PhD student Josh Kufera.

Celestial bodies weren’t the only thing aligning yesterday on the sidewalk. Kufera and Jayden Moore, a 10-year-old from the West Baltimore neighborhood of Sandtown, found themselves oohing and ahhing over the same obscure scientific wonder.

“Seeing it was really awesome,” said Moore, who came to the viewing with his mother Carole and was eager to see the viewing box he made from a frosted flakes box would work.

“There’s aluminum foil, but then the white paper acts like a projector screen that you can see the light bounce off,” Jayden explained.

For some adults, the eclipse was a chance to revisit the joy of experiencing science the way Jaden was – like a youngster.

“It’s freaking amazing. It’s like the most incredible thing I’ve ever seen in my life,” said 25-year-old Bryniah Wharton.

“I thought it would just look like it does on an internet picture,” she said. “But now that’s it’s actually in my eyesight, it becomes way more amazing. I feel like a kid again!”