Jesus Munoz remembers, “like it was yesterday,” the day president Barack Obama announced the Deferred Action for Childhood Arrivals Program (DACA) allowing people like him – brought to the U.S. illegally as youngsters – the right to live and work here.

“I just felt like a weight left my chest,” said Munoz, 21, who came to Baltimore from Mexico when he was four years old. When he heard the good news about DACA he’d been on a Sierra Club camping trip in Virginia.

Now, five years later, the anxiety is back for the University of Baltimore Environmental Science student, as he confronts the possibility the U.S. government could return him to a country he’s never known.

“I barely know Spanish – I can read and write it, but at the level of a second grader,” he said. “Here, I can write a 20-page paper on climate change. There, I could barely speak a sentence.”

Munoz was too busy attending classes to get to the information session provided yesterday by two law school faculty members after President Donald Trump’s announcement Tuesday of his plan to eliminate DACA.

(Munoz, who holds down two campus jobs in addition to a full course load, signed up for one-on-one consultation with the Immigrant Rights Clinic later this week.) 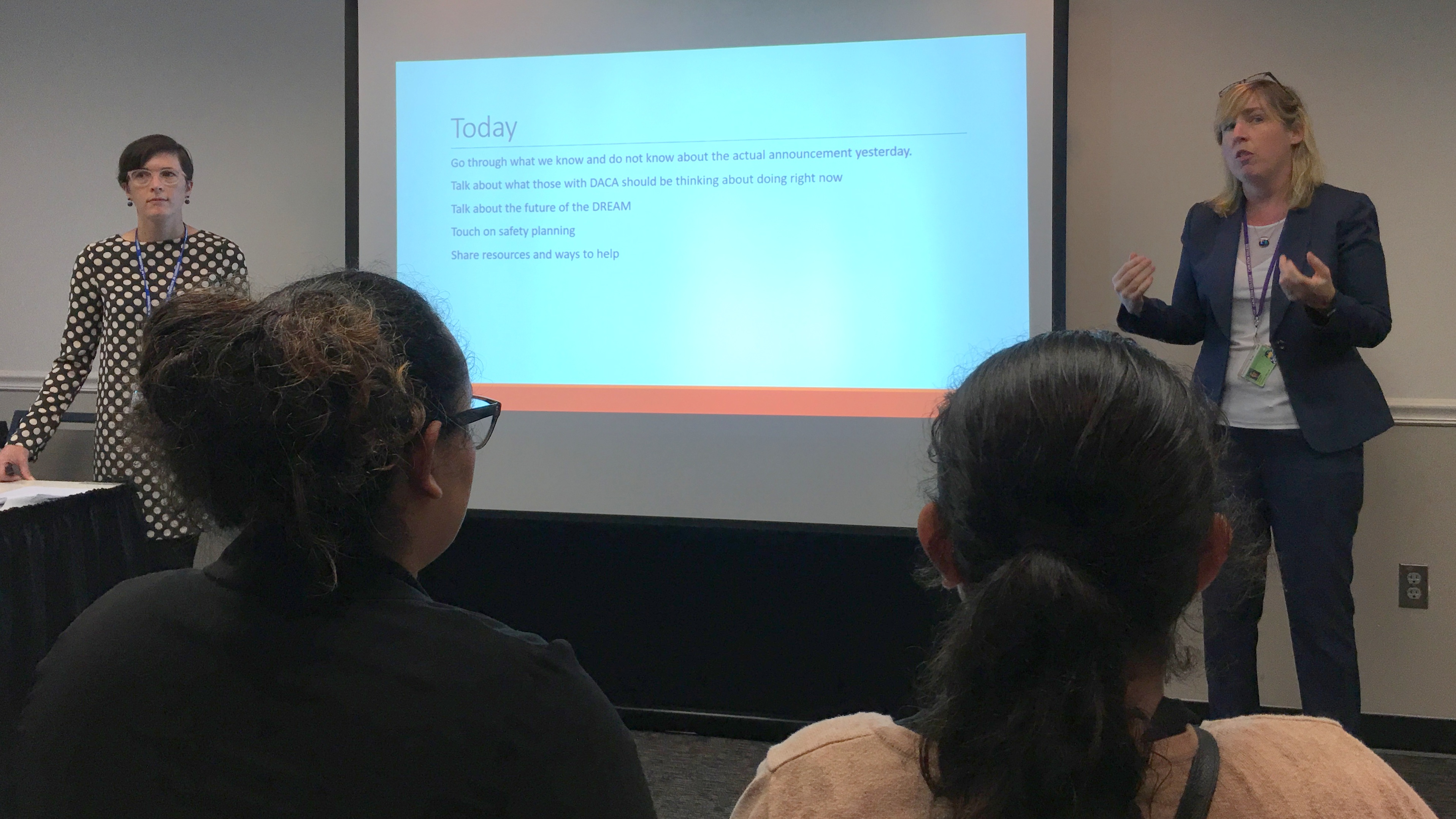 Nickole Miller and Elizabeth Keyes, of the Immigrant Rights Clinic at the at the University of Baltimore law school, offer information following the government’s announcement of a plan to end the DACA program. (Fern Shen)

But nearly 50 people packed a campus classroom for the presentation on everything from getting married to improve your immigration status (“Do not do this! The government is very determined to find marriage fraud!”) to what to do if Immigration and Customs Enforcement Agents (ICE) come knocking at your door.

“Do not open the door unless they have a warrant signed by a judge,” said Nickole Miller, a clinical teaching fellow at the Immigrant Rights Clinic at the John and Frances Angelos Law Center.

Her clinic colleague, assistant professor Elizabeth Keyes, reminded the rapt audience that they have the right to remain silent, to make a phone call and to refuse to answer questions without a lawyer present.

“Some people write what they will say and hang it by the door,” she noted.

There was advice to have all your papers together in one place and a warning to be wary of notarios, people who fraudulently hold themselves out as having authority to submit documents and advise on immigration matters.

And there were questions, some of which had no clear answers: Would people who lose their DACA protection lose their Maryland driving privileges? Their in-state tuition rates?

Tangled up in Politics

The so-called “dreamers” in the room, like Munoz, are among the 9,000 Marylanders who qualified for DACA after Obama created it in 2012.

The program shielded them from deportation and allowed for work permits for those who entered the country before 2007 as long as they were in school, had graduated or had been honorably discharged from the military and did not have a criminal record.

Obama created the program through a temporary order after advocates in Congress failed for years to pass the so-called Dream Act (Development, Relief and Education for Alien Minors). 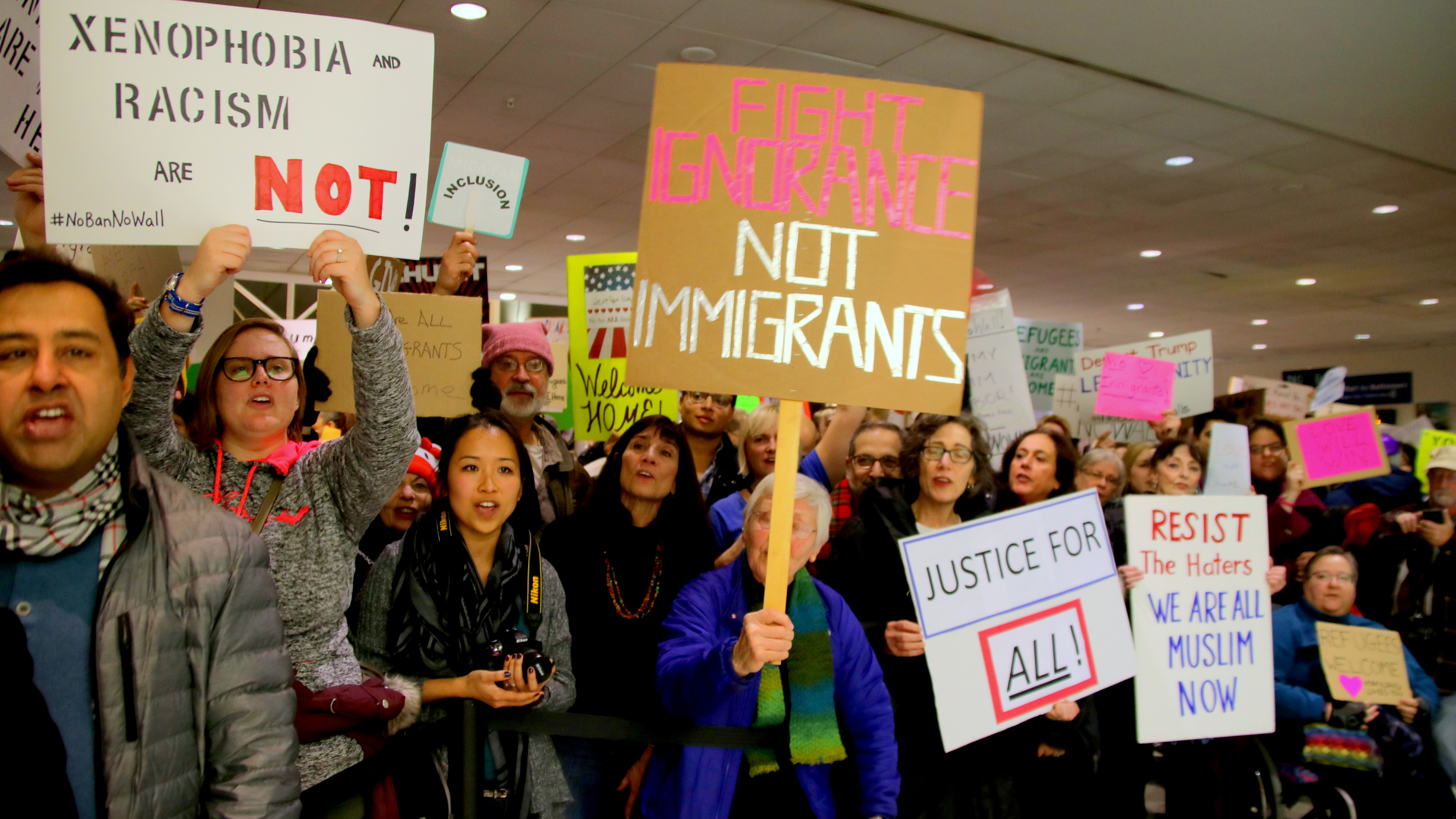 The White House said Tuesday it was ending the program but allowing Congress six months to come up with a final resolution on the politically volatile issue. In the meantime, the government would renew some work permits for those already covered under DACA, but would stop approving first-time applicants.

Amid the uncertainty, the two lawyers did their best to be upbeat before launching into the details.

“You are not alone,” Miller said. “There are thousands, millions of people all across the country that are standing up and standing together to fight for DACA.”

Among the links to resources they offered was a “Mental Health Toolkit” with tips on mindfulness and breathing exercises. As Miller spoke about it, at least three people in the audience were jiggling one leg nervously as they sat in their seats.

Miller reviewed the new rules and deadlines for initial and renewal applications.

“If you’re filing for DACA for the first time – provided your application is pending and was received by the government as of September 5 – the application is still going to be adjudicated,” she said.

“If you have an application that hasn’t yet reached USCIS  (U.S. Citizenship and Immigration Services) or the Department of Homeland Security, you are unfortunately out of luck at this time.”

Some in the room were taking notes furiously.

“In terms of revocation, there’s a lot of fear out there that DACA is gone as of yesterday, but that is not the case,” Keyes said. “If you have a work permit that is good through 2019, it’s good through that date. The ability to extend it – that’s gone.”

She said that out of mistaken fear that they will be prioritized for deportation, some people with permits “are already not showing up for classes.”

“We’re grasping for reassurance,” Keyes acknowledged with a grimace, pointing out that no one in the federal government has said deportations would begin immediately when work permits expire and that the deportation process is slow.

“We have five judges in Baltimore who, before DACA goes away, have 23,000 pending cases,” she said.

The lawyers were questioned closely by audience members, including one woman who asked what happens to applications postmarked, but not received, by USCIS by the September 5 deadline.

“They would probably be rejected and returned with the application fee,” Miller said. (The cost was $495 to apply.)

“So there’s no fear of deportation?” the woman pressed.

“No, the rejection would happen right there in the mailroom,” Miller replied.

Some in the room, among them Alassane Coulibaly, were not DACA recipients but were worried about their immigration status for other reasons. The 25-year-old business major from Mali said he was waiting for his citizenship papers to come through as part of the Military Accessions Vital to the National Interest (MAVNI) program to come through.

MAVNI is a Defense Department recruitment program through which people who are not citizens or legal permanent U.S. residents with certain critical skills are recruited into the military services of US.

“It’s supposed to be a six month wait but it’s been one year now,” he said.

Later in the day, Munoz took a moment to talk about his own situation, stepping out of a meeting where he was urging the Student Government Association to support DACA and its student  recipients.

“I was getting emotional in there,” he said with a smile.

Originally from Chihuahua, his father and grandfather both members of the military, Munoz said the family came to the U.S., settling in Highlandtown, in search of a better life.

“I’m the only one that went into higher education,” he said. “Before President Obama made that announcement, I didn’t think I could do it or afford it. It made me have some hope I could get a job where I wouldn’t have to get up at 5 o’clock in the morning for little pay.”

Inspired by teachers at Digital Harbor High School, he said, he decided to focus on environmental science and policy, particularly climate issues.

At college, he got some scholarship support when he won a $2,000 scholarship from the Featherstone Foundation. And he was preparing to take the GRE’s and thinking ahead to graduate school, perhaps at Johns Hopkins University or Harvard University.

“Now, I don’t know what will happen,” he said, noting that his DACA permit expires on June 3, 2019, about six months after he expects to graduate from the University of Baltimore.

Mixed with his sadness and fear after the news from Washington, Munoz said, he’s had one good feeling: relief when he could be open with classmates who had no idea about his immigration status.

“They were shocked, but this is what people need to know: we’re everywhere,” he said. “We’re in your schools and your hospitals. We’re your lawyers and your business owners. We’re normal people. Americans like you.”

What if he eventually is deported? Munoz said he’s been preparing for the worst-case scenario ever since Trump was elected and knows he will succeed, whatever happens.

“Here you’re taught you’re the best of the best,” he said. “I can take that with me wherever I go.”