In a big industrial-looking building south of Baltimore, signs that an unusual graduation ceremony was about to take place were laid out on a table:

For each of the four graduates, there was a brown canvas tool belt, hardhat, hammer, level, tape measure and other tools of their new trade: carpentry.

For Neko-Whitfield-Smith, an 18-year-old graduate of Carver Vocational-Technical High School, the decision to become a carpenter and to join Local 177 felt like a natural next step.

“It was a craft I really took a pride in,” said Whitfield-Smith, at the luncheon ceremony held at the union’s training center in Halethorpe before family members and dignitaries including Secretary of Labor Kelly M. Schulz, City Council President Bernard C. “Jack” Young and City Councilman Ryan Dorsey.

The luncheon, sponsored by the NRCC and the Mid-Atlantic Carpenters’ Training Center, marked the end of an eight-week program of classroom and hands-on training in mathematics, occupational safety, hand and power tool skills, concrete construction and welding.

Tools of the trade lined up for graduates of the pre-apprenticeship program. (Louis Krauss)

Upon completion, the graduates can pursue a career in carpentry through Local 177 or enter the specialty Local 179, for Dockbuilders and Piledrivers.

For Whitfield-Smith, the apprenticeship means a chance to help his family with the income from a good union job – and down the line to maybe use his connections to help his brother do the same.

“I told my little brother, since he’s taking up carpentry, that when I get my foot in the door and know some people, I’ll get him a job,” he said.

Restoring Jobs in the City

Delegate Cory McCray, delivering the keynote speech, said the program helps address one of Baltimore’s most critical problems – unemployment and the lack of jobs for poor city residents.

Finding a route to success through a union apprenticeship after his troubled formative years, the licensed electrician used his own story to inspire the graduates.

“I represent the east side of Baltimore and I understand what poverty looks like, what food deserts and having abandoned houses looks like,” McCray said. “But I know having the apprenticeship program is one step towards solving that problem.”

John Barber, president of Local 177, also said he sees their program as a chance to lift up the job-starved sections of the city.

Although unemployment in Baltimore is about 6% overall, in particular neighborhoods it is dramatically worse. City officials starting up a mobile employment van program recently said they identified 14 communities where unemployment is 50% or higher.

“We know there’s a lot of struggles for individuals in some communities that for whatever reason don’t have the opportunities of others,” Barber said, speaking with the Brew.

“So that’s our main focus – to work with and help the city,” Barber said. “I grew up here, the city is near and dear to me, so we’re trying to help people get back to work.”

Burns on the Stomach

The program, which included regular fitness classes each morning, was physically demanding for the four carpenter-trainees. It was so tough, Whitfield-Smith said during his graduation speech, that he sometimes felt like quitting.

“Especially the welding, it was real rough,” he said. “I kept getting burnt all the time on my stomach. It’s hot!” 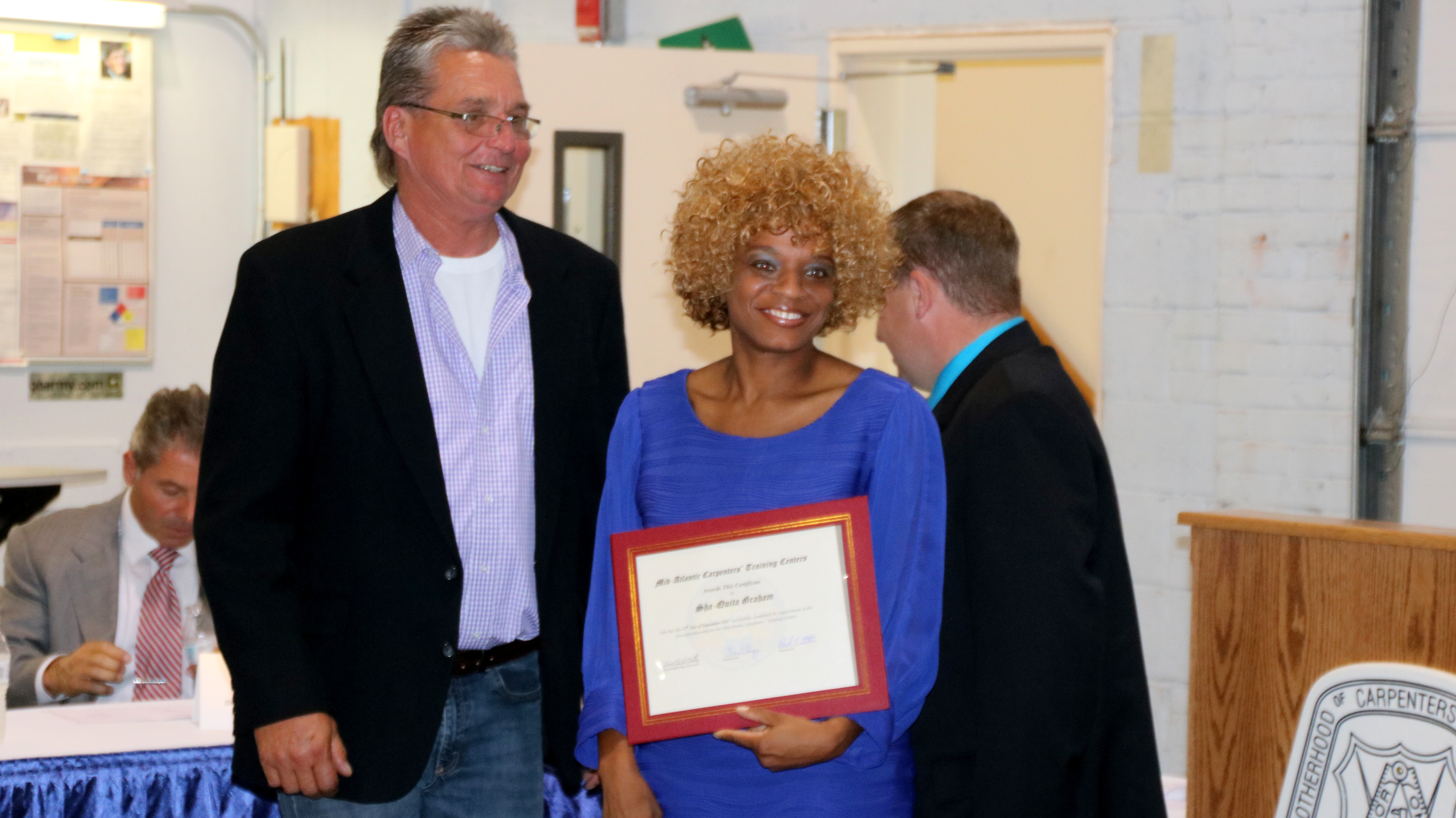 The other graduates were Rashard Phillips and Mark Hill, both also 18, and ShaQuita Graham, 40, who has done two other apprenticeships in the past and has worked as a residential maintenance technician.

Graham, who plans to specialize in Dockbuilding/Piledriving, said she felt like a mentor for the three young men in her program.

“I had to talk to them about a few things in different avenues and what to expect,” she said, explaining that this was a big opportunity for their futures.

“Now they understand that it’s not a job, it’s a craftsmanship,” she said. “You’re learning the skills you need to further your life and get a pension, take care of your family and for whatever you want to do. Doors are being opened through this apprenticeship.”

In her remarks, Graham recalled how the kind gestures among the students went both ways. The boys helped her when she struggled to recall standard high school math, for instance.

“And two of them took welding in high school, so they were able to help me out with that,” she said. “We were like a tight-knit family. I taught them how to do carpentry and use a saw.”

Although the four weren’t paid a lot while doing the pre-apprenticeship, they received weekly $50 stipends. Graham said from her experience, entry level carpentry jobs pay $16-$18-per-hour currently, much higher than it used to be.

The main thing the four have in common, Graham said, is the satisfaction of learning they know will have an immediate practical payoff.

“You’re dedicating your time, you’re learning a skill and it’s hands-on. It’s not just book knowledge,” she said. “All of us have become very passionate about doing it.” 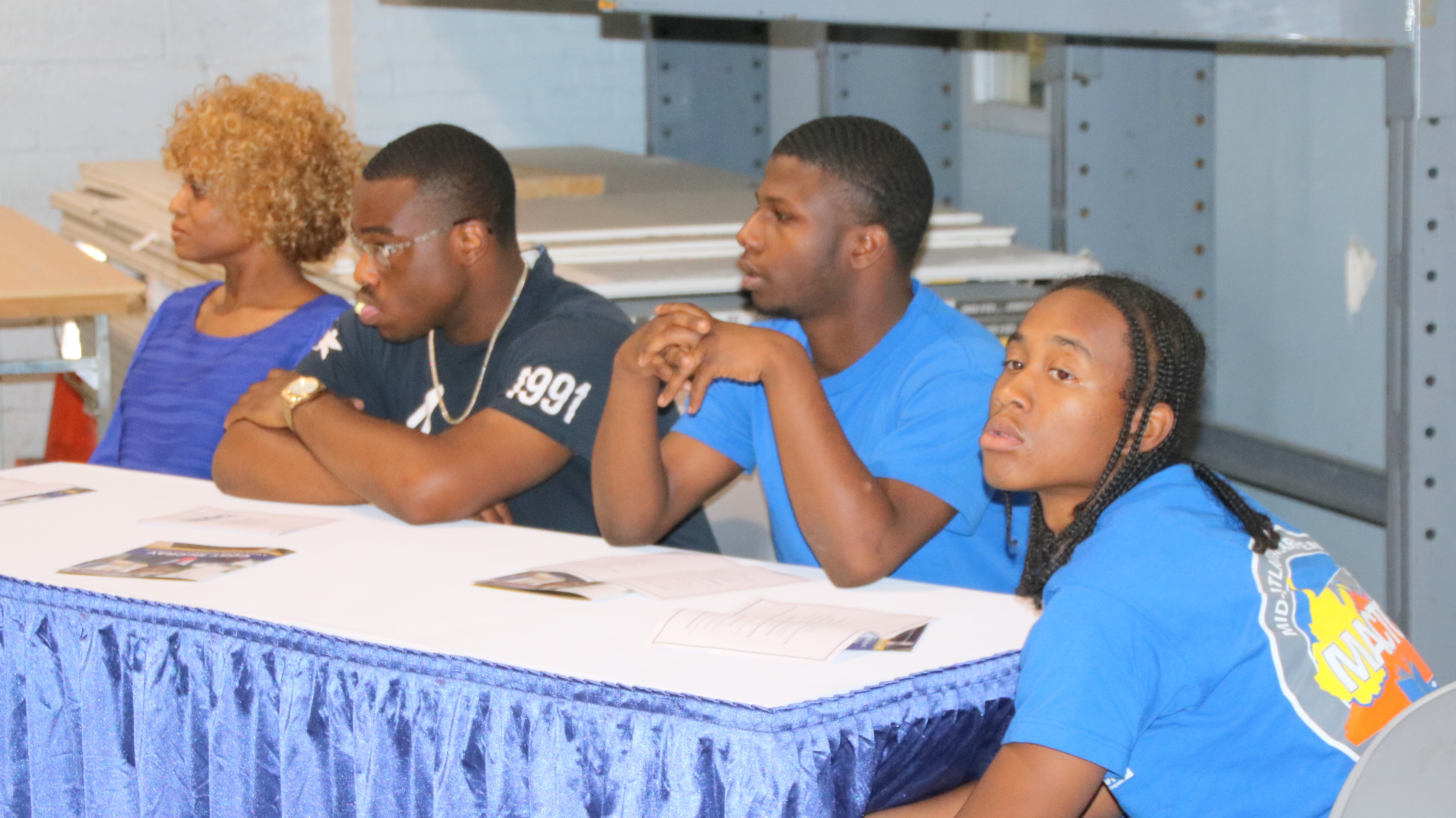