Earlier this summer, residents of South Baltimore’s oldest black community were shocked to learn that the developer of an upscale apartment complex had put forward plans for the redesign of their modest neighborhood park.

Among the ideas proposed by Caves Valley Partners – a 1,200-seat football stadium that would consume nearly half of the park’s green space and a dog park that would replace a beloved (if poorly maintained) city recreation center.

“This was the first time we heard about this,” said Taryn Gross-Ojekwe, who has lived in Sharp-Leadenhall for 37 years. “It put us in a tizzy because it was clearly catering to people at the new development.”

Gross-Ojekwe and others formed the Solo Gibbs Recreation Council to “save” the two-square-block park that is flanked by the high concrete pillars of I-395.

Speaking last week to The Brew, five members of the council spoke of a tight-knit community being squeezed out of discussions about their cherished park.

“We want some light to be shined on the whole process,” said Linda Davis, council president. “We believe the city is favoring the developer at our expense.” 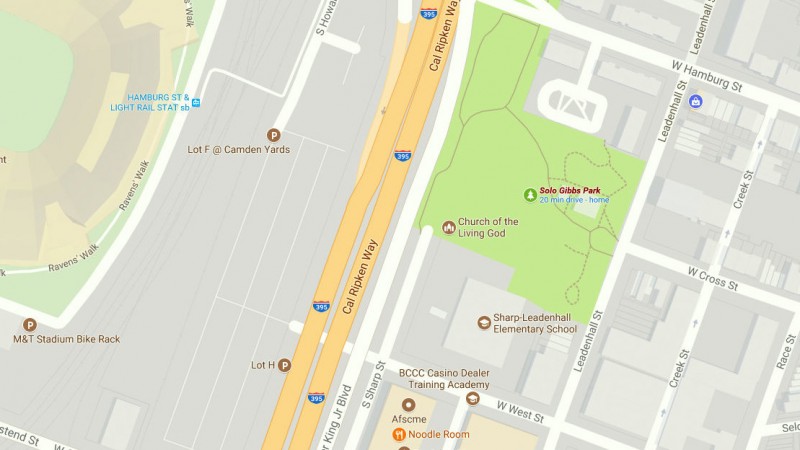 City: “There is no Plan”

On Monday night, a Department of Recreation and Parks official suggested that the city was disregarding the plans of Caves Valley, the developer of Stadium Square whose inaugural building stands across Leadenhall Street from the park.

“We are starting from scratch,” Katherine Brower told a newly-formed steering committee that invited members of the Solo Gibbs Council to the meeting.

“There is no plan, OK,” Brower continued. “There may have been plans done in the past. And there have been plenty of ideas. But tonight we’re starting from scratch . . . to kick off the beginning of a planning process for what we’re going to do for this park.”

Arsh Mirmiran, the Caves Valley principal, alluded to the apparent change of direction at the meeting.

Speaking in third person, he said, “Arsh is trying to stay out of the park. I offered to take over the whole thing. We are now going in another direction.” 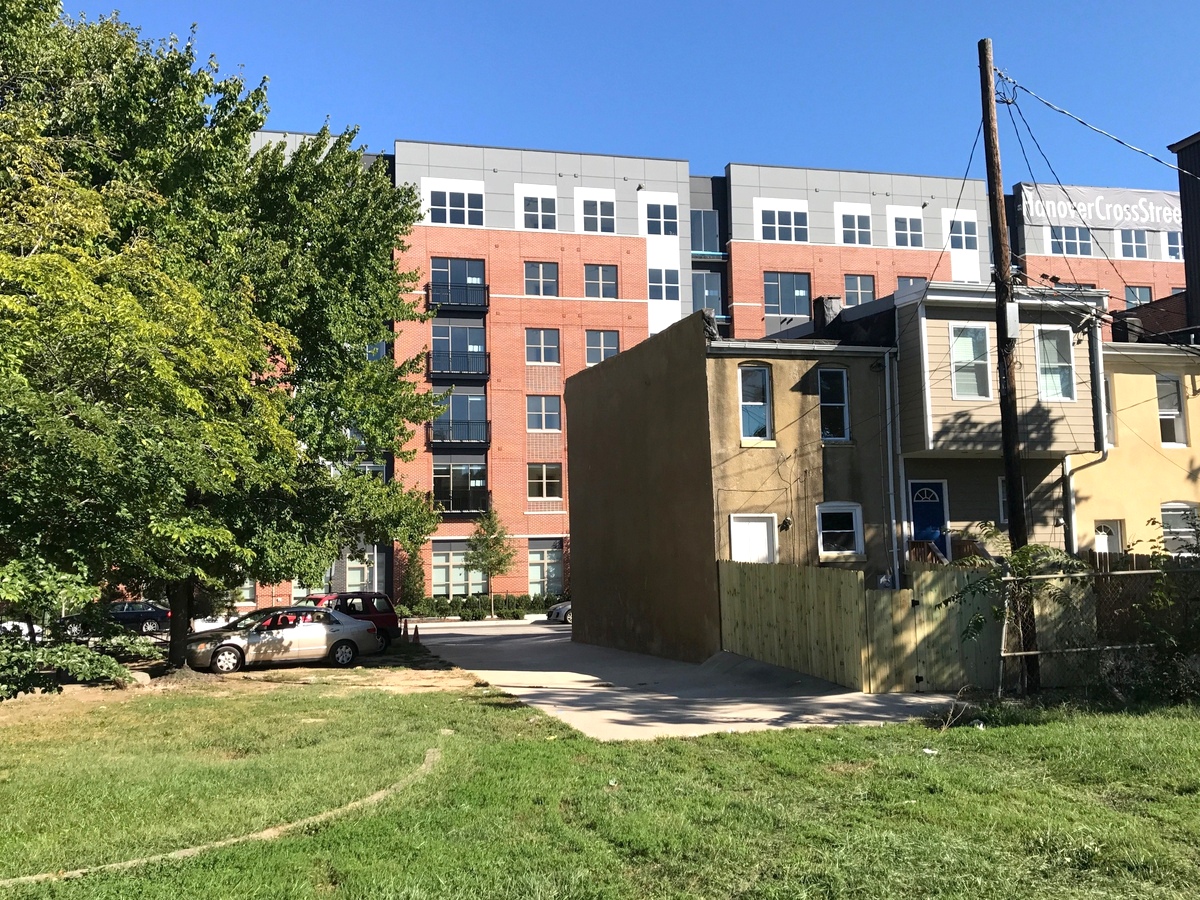 As viewed from Solo Gibbs Park: rowhouses dating back to the 1800s and the partly opened Hanover Cross Street apartments across Leadenhall Street. (Mark Reutter)

Last June, Mirmiran disclosed plans to build the football stadium in the park, which he said the Baltimore Ravens and National Football League had expressed interest in funding.

A political player who has been closely involved in the remaking of the nearby Cross Street Market, Mirmiran hired RK&K Engineers to present four concepts for the park.

Mirmiran said the plans, which he said had the support of the Leadenhall Baptist Church and a small community organization, were designed to make Solo Gibbs “a better amenity and gathering place for current and future residents and office workers in the area.”

While none of those plans was mentioned at Monday night’s meeting, Mirmiran told the steering committee that the park had become “an open-air drug market.”

After Gross-Ojekwe objected, saying Solo Gibbs had no more problems than other public spaces in Baltimore, Mirmiran amended his statement.

He said another person had pointed out the alleged drug activity and he was not personally capable of verifying such transactions. 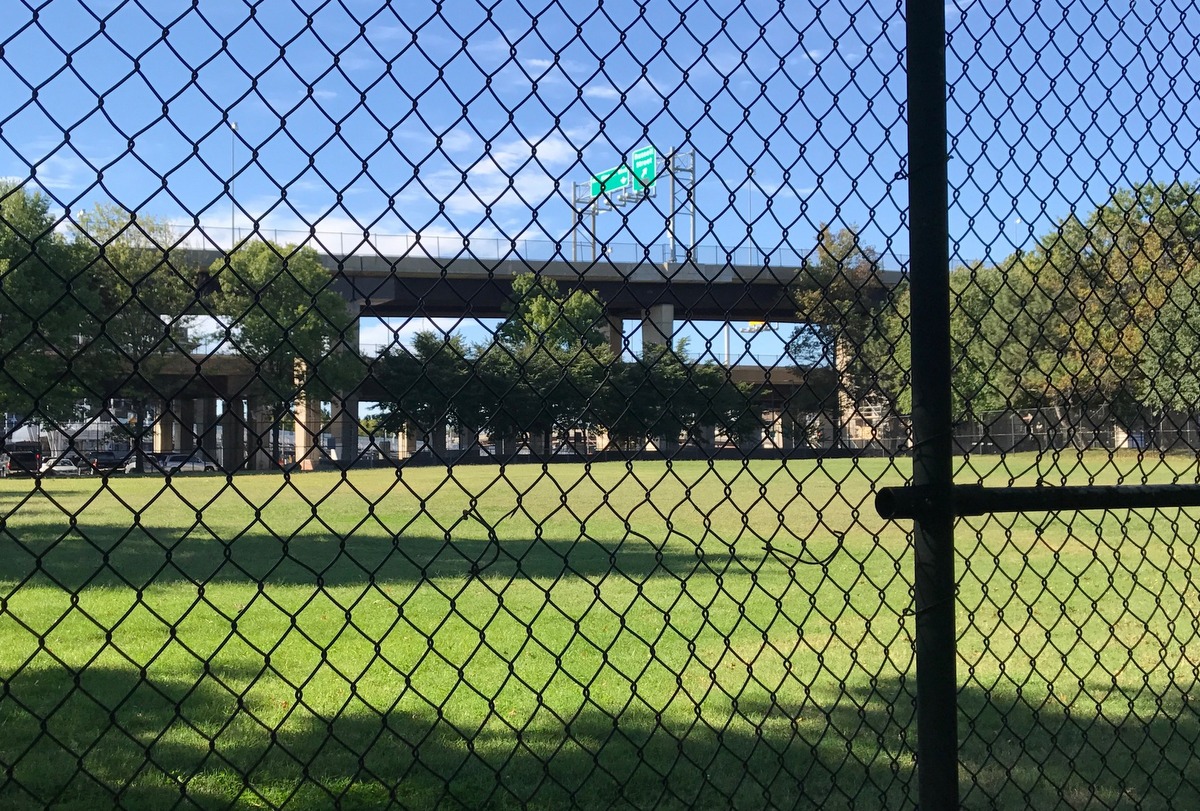 The baseball field suffers from poor drainage and is often unplayable. To its rear are the elevated ramps of I-395. (Mark Reutter)

Led by Rec and Parks’ consultant, Mahan Rykiel, Monday’s meeting started with a “thought exercise” that asked participants to consider the best and worst aspects of the park.

Gross-Ojekwe said the park needed to be better maintained by the city, but otherwise served as a much-needed oasis for a community hemmed in by I-395 and acres of parking for M&T Bank Stadium.

Davis praised the rec center that Mirmiran had proposed to raze and said the current baseball field could be converted to a flexible space to be used by children for various sports.

Geraldine Clifton, a descendant of abolitionist Frederick Douglass, was among many who recommended that markers, and perhaps a historic trail, be placed in the park to describe and celebrate Sharp-Leadenhall’s role as home to the oldest settlement of “free blacks” in Baltimore.

Rec and Parks disclosed that it expects to secure $1 million for improvements to the park. “This funding will be available for FY19 and will be used for priority projects mutually identified by stakeholders and BCRP,” a scope-of-work handout stated.

Mahan Rykiel, meanwhile, outlined an array of meetings, assessments, surveys and concepts that would culminate in a final plan next August. 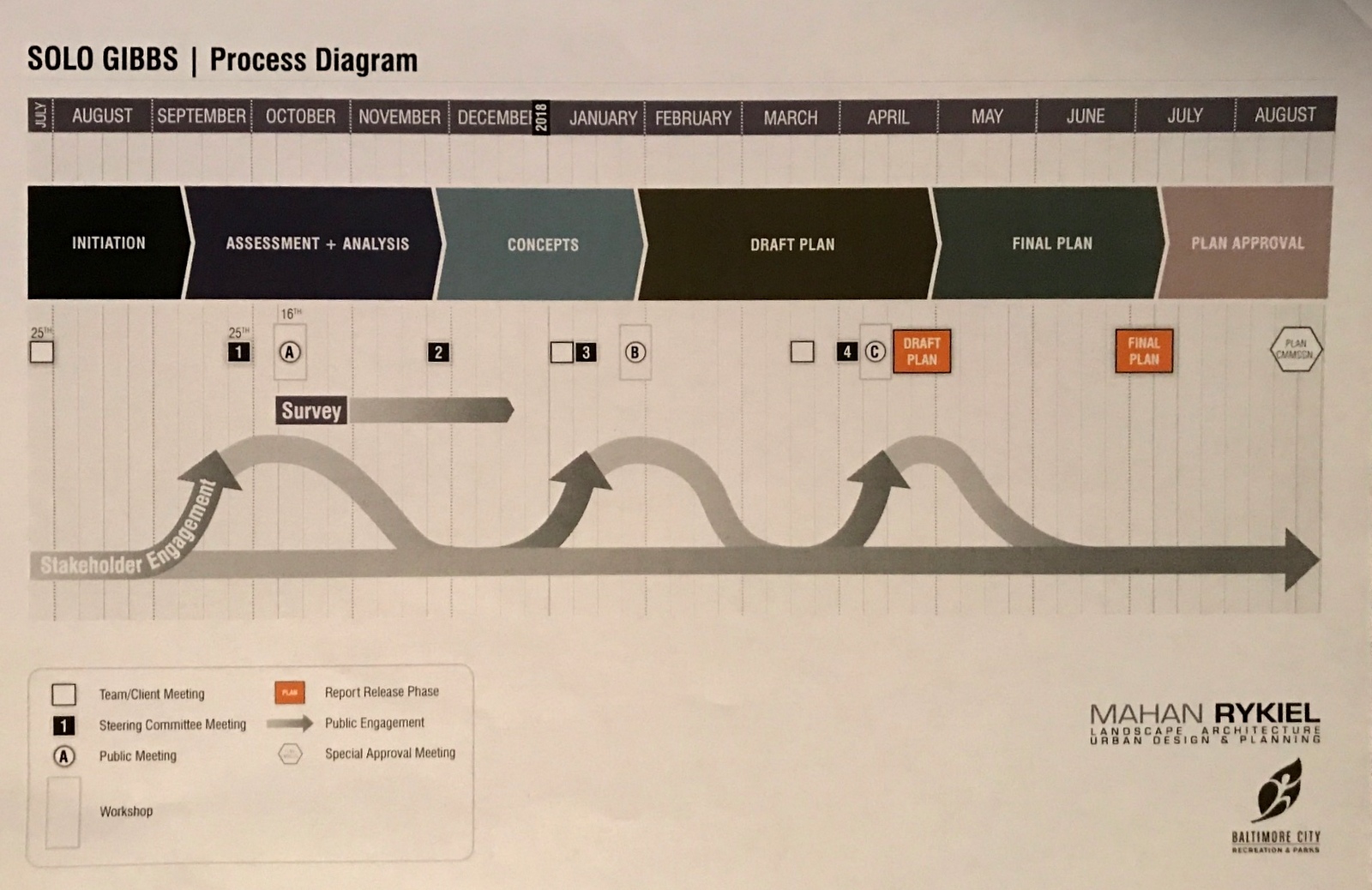 Planning for a better park will not be simple. On Monday, the steering committee was handed this “process diagram” describing the steps required to finish the master plan by August 2018. (Mahan Rykiel)

Before the start of Monday’s meeting, a member of the mayor’s office asked The Brew to exit.

Ethan Cohen, who coordinates the Baltimore Casino Local Development Council (LDC), said the meeting was not open to the public and a reporter’s presence would inhibit discussion by the group.

The Brew said it would leave only if Cohen cited the applicable part of the Maryland Open Meetings Act that permitted a closed session.

After the meeting got underway, The Brew identified itself to the group. No objections to its coverage of the meeting were raised by the participants. 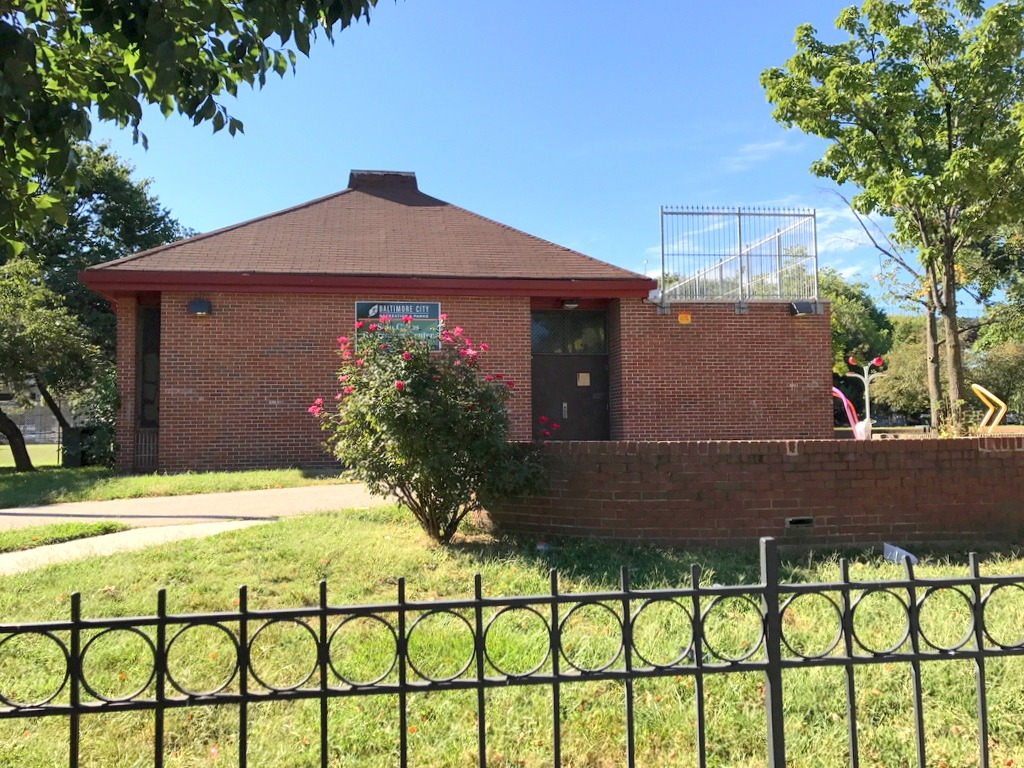 Caves Valley’s proposal to raze the Solo Gibbs Rec Building for a dog park galvanized the community. The developer said the center’s activities could be relocated at an elementary school slated to be surplused in 2020. (Mark Reutter)