The due date has arrived. After a decade’s worth of studies, plans, consultants, meetings, revised plans and still more consultants, an eyesore and pedestrian scare zone – the intersection of Light Street and Key Highway – is about to undergo a rebirth.

The M. Luis Construction Co. has been awarded a $6.3 million contract to perform a “full-depth road reconstruction” of the lopsided intersection (eight lanes dividing into a narrow Light Street and four-lane Key Highway) and two adjoining blocks.

Set to start next month, the work is expected to take two years to complete, says Department of Transportation spokesperson Adrienne Barnes.

Traffic delays are expected during the two years of road reconstruction, especially during the morning and evening rush hours.

Among the tasks at hand – tearing out the railway track that curves through the intersection and heads down Key Highway (a remnant of the city-owned Municipal Harbor Belt Railroad that served the area’s one-time wharves and factories) and replacing the water pipes, conduits and other infrastructure under the street.

The final product will be a virtual carbon copy of the current alignment, softened by rows of trees and updated with new signal lights, sidewalks, landscaping and ADA-compatible crosswalks. 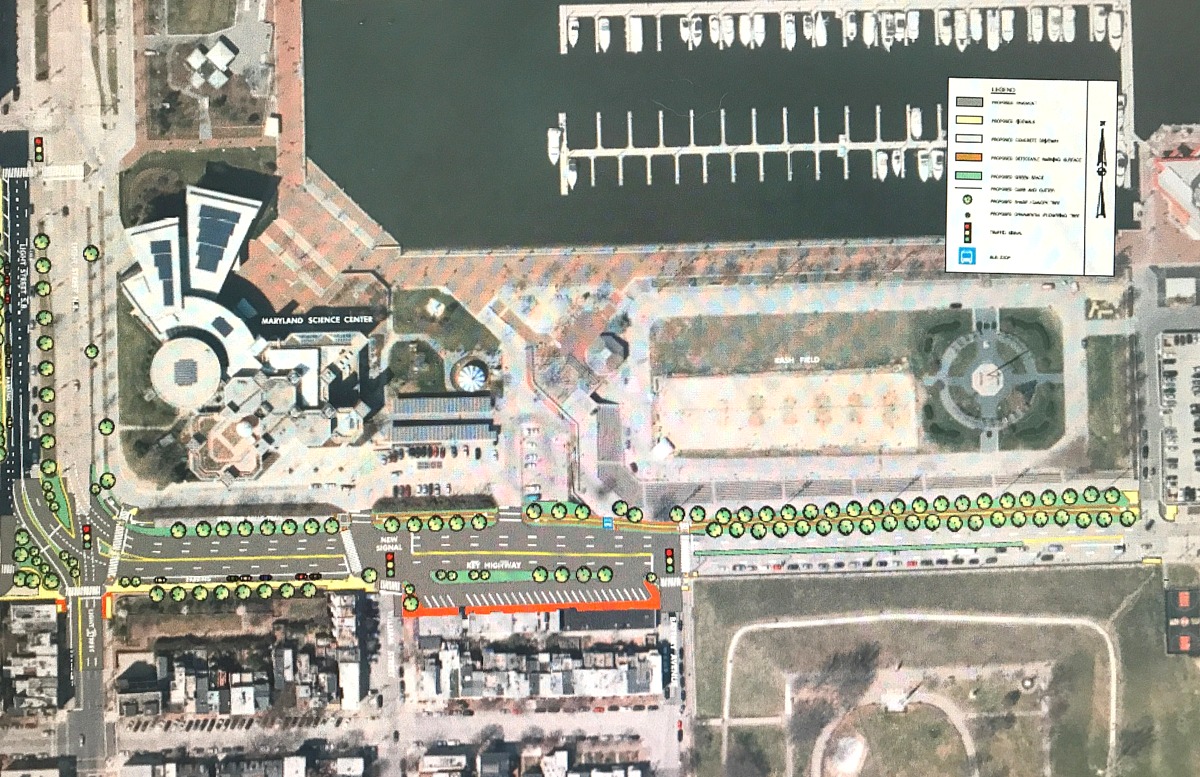 Originally, DOT had a much bigger idea for the site – namely, a traffic roundabout, or circle, that would slow down cars, enhance pedestrian safety and act as an “iconic gateway” to the Inner Harbor.

Consultant drawings back in 2009 depicted native grasses and flowering shrubs in a central plaza featuring a fountain in the middle and two lanes of circulating traffic on the perimeter.

Given the tight dimensions of the intersection, the circle was soon viewed as impractical by DOT engineers and some Federal Hill residents, while the $7 million price tag was deemed too rich by the Sheila Dixon administration.

So it was back to the drawing boards. 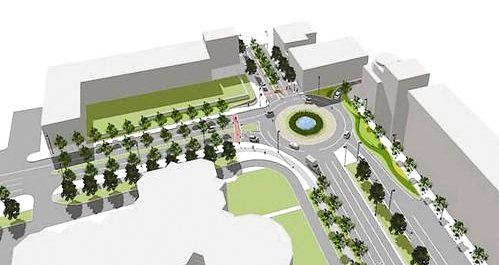 A new consultant, STV Inc., was awarded $449,000 by the Board of Estimates to re-envision the roadway exactly as it was, except to add trees and more pedestrian-friendly accessories.

Since November 2015, DOT and its consultant drew up modest alterations to the intersection, bid out the contract, reviewed four incoming bids and handed out the job to M. Luis, the city’s top paving contractor by dollar volume.

As time went by, construction costs have increased, so that the new roadway will cost practically as much as the proposed traffic circle.

The latter pot of money had been earmarked for the now-deceased Red Line transit project.

Here are some specs from the Key Highway-Light Street contract, according to DOT’s Barnes:

• The new road surface will mimic the existing surface, meaning concrete on the north leg of Light Street and asphalt on the south leg to Montgomery Street. In the same way, Key Highway will be asphalt from Light Street to Battery Avenue and concrete from Battery to Covington Street.

• The intersection will feature improved crosswalks on Key Highway as it swings east on a curve that makes the sight lines of southbound traffic hard to discern by walkers and bikers. A median strip is expected to guide cars southbound as Light Street transitions from four to one traffic lanes at Hughes Street.

• New street signals will be installed on Key Highway at William Street, and the earth bern between Key Highway and Rash Field will be replaced with a dual row of trees.

• Key Highway will be repaired but not replaced between Battery Avenue and Covington Street, while the Gwynns Falls Bike Trail will be improved where it crosses Key Highway at William Street.

Lanes to be Closed

Delays should be expected during the two-year period of reconstruction, especially during the morning and evening peak periods, Barnes told The Brew.

For the most part, the intersection will remain open. “The amount of delay will depend on the specific lanes that are closed – this will vary depending on which part of the intersection is under construction at any given time – and how many motorists utilize alternate routes,” she said. 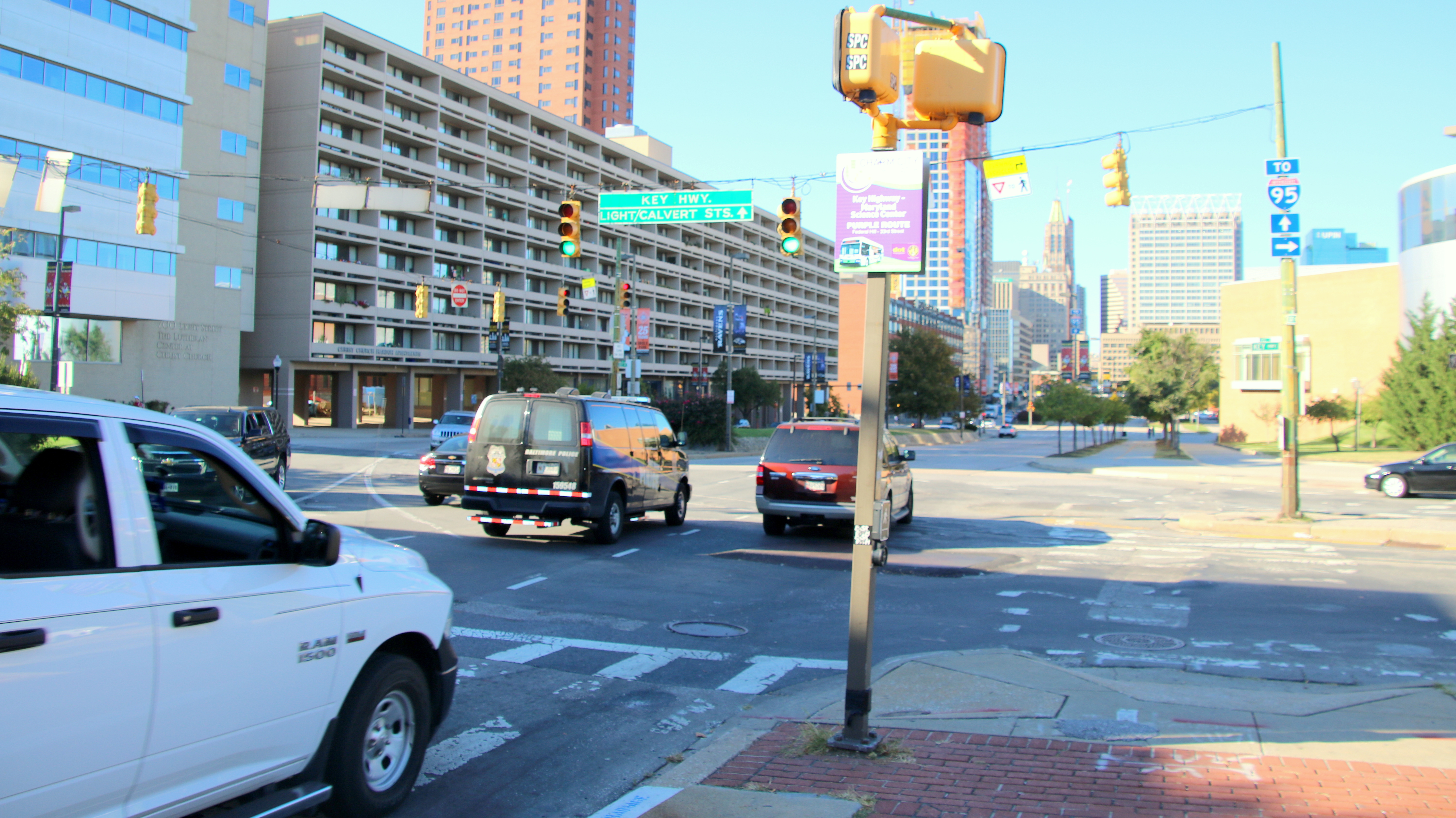 Northbound Light Street (seen here) will undergo no fundamental change at Key Highway except for new traffic signals and a slightly realigned crosswalk to the Maryland Science Center. (Fern Shen)